I have something to admit to you all. My name is Jason, and I have a glove fetish. There I said it.

It’s always been gloves or helmets for me. I just can’t help myself. I’m like a bloody magpie for them. Constantly getting side tracked when I’m supposed to be researching something else. Those pesky sale pop ups at (add favourite bike shop here) offering tantalising discounts…stop, please just STOP!

So lately I’ve put a block on any new helmets or gloves….Ha! So I thought.  Then one day literally out of nowhere, I stumbled upon HANDUP GLOVES. I think it was via Instagram, you know, just going from one feed to the next until Whoahh!!!! Back up right now!  Oh yes sireee. It was love at first sight.

I quickly got on the dog and bone (that’s a phone, for all you non-Cockney slangers out there) and made contact with their Australian distributor, being Full Beam Australia, who very kindly agreed to send a pair across to me. Which was very nice of them, and pleased me considerably considering my whole affinity with all things gloved. Don’t worry, I didn’t tell them about my little problem, that’s just between you and me. 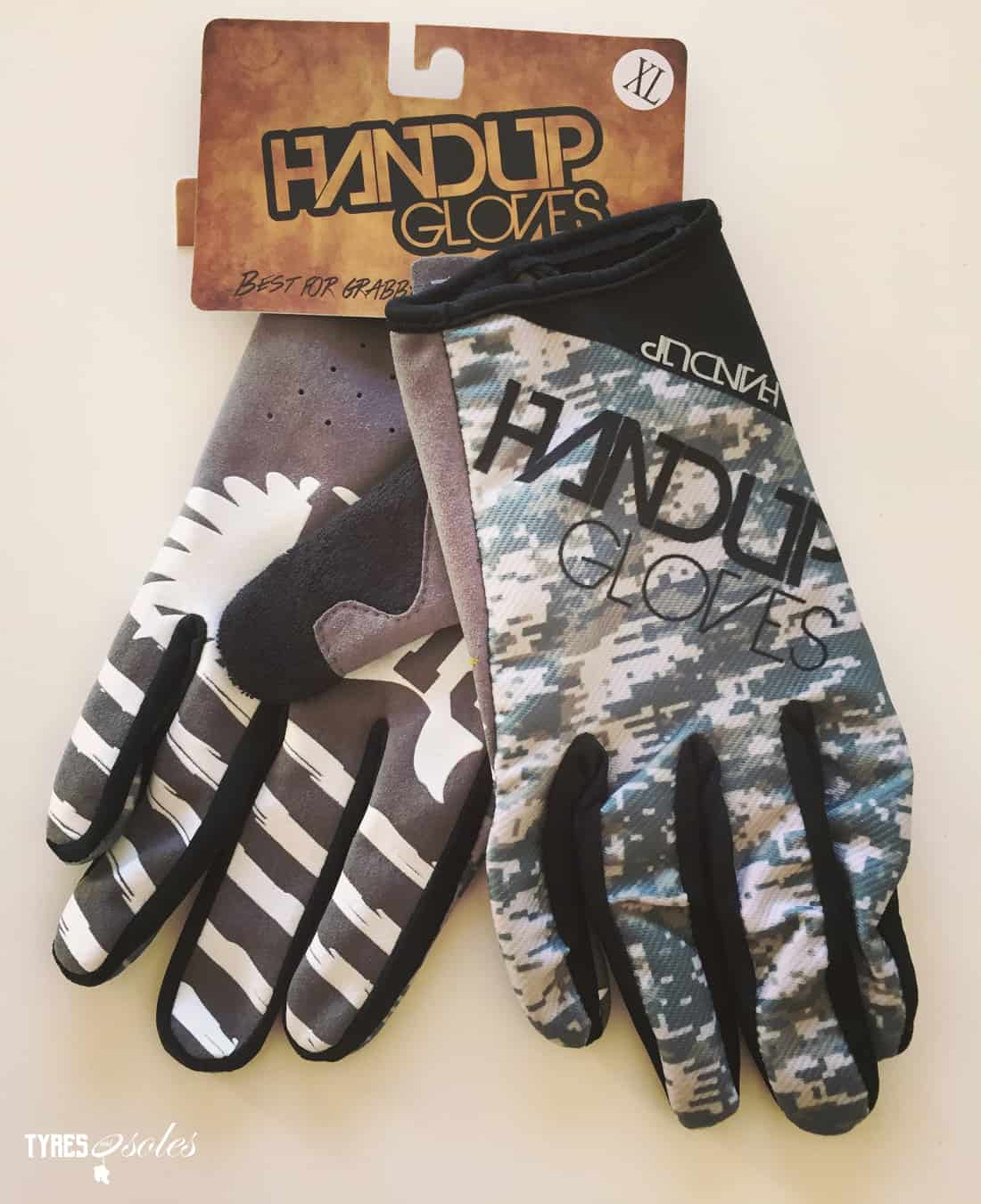 The gloves arrived a couple of days later and I dutifully teared the living shreds out of the packaging like a six year old on Christmas day. Straight out of the packaging my initial reaction was “Wow, these look really nice!” with their unique graphics and quality materials I was impressed right off the bat. But looks are not everything so I tried to remain calm. 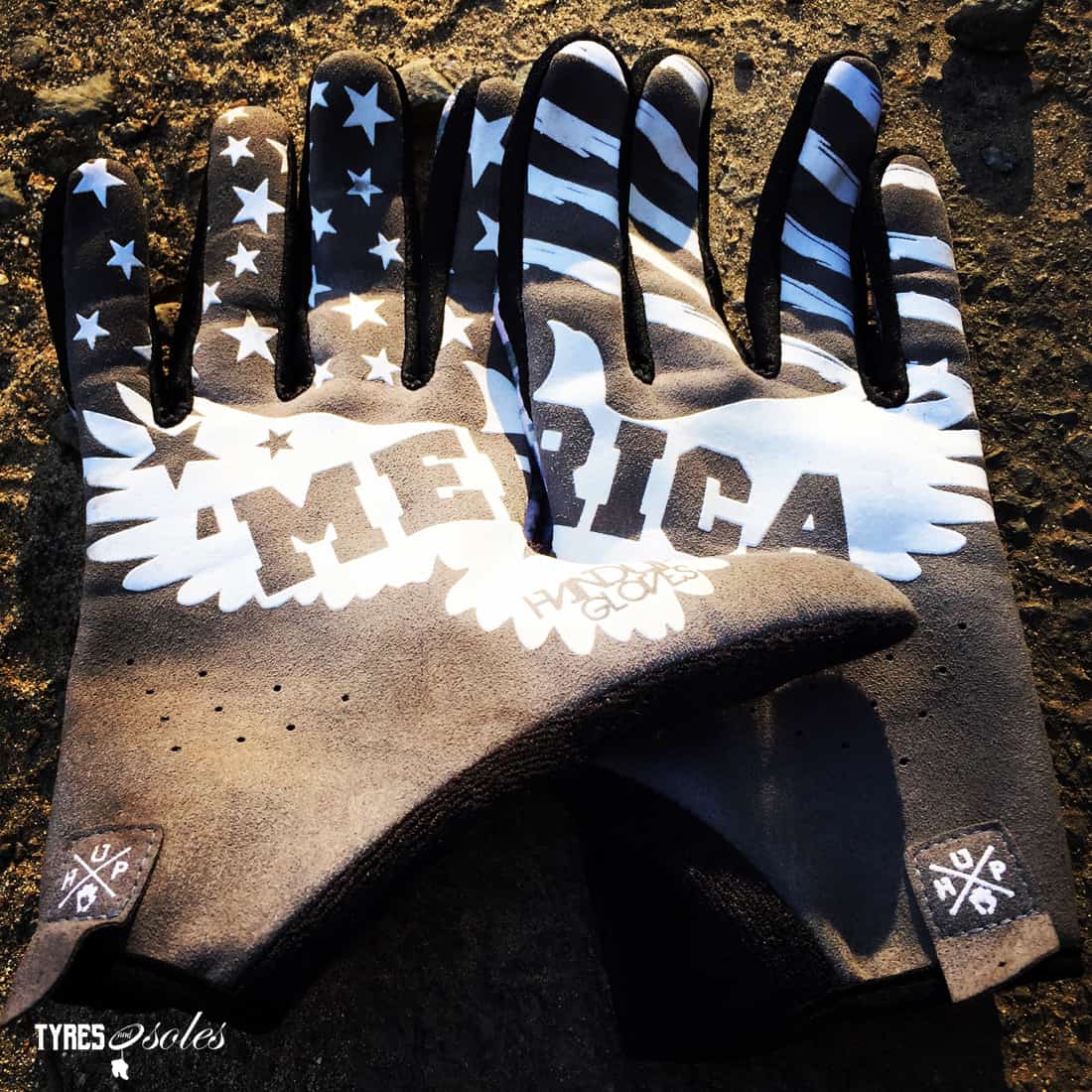 I really like the humour that these guys put into their packaging. The small things make the difference for me.  The little reminder on the packaging for example…Best for Grabbin’ Bars & Beers! Well yes, of course. 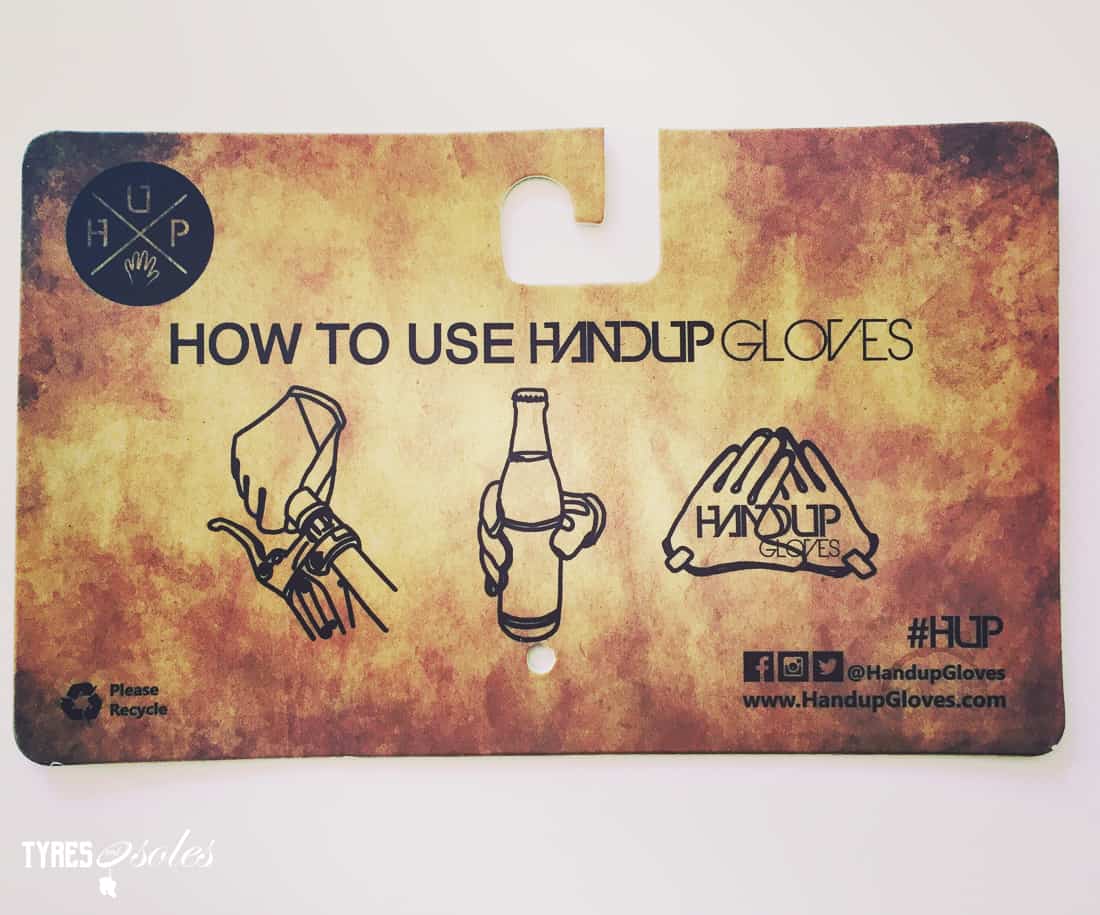 HANDUP GLOVES…Just in case you forgot how to use them. Pic: ©Tyres and Soles

I was hesitant with the fit as I seem to have rather large hands. Often referred to by my other half as garden shovels. Well, I don’t think that’s quite fair but hey, we all know what big hands mean?…..yes, that’s right, big hands. Hold your breath….YES! They fit! Just like they said they would with the online size chart.

Straight out of the packet they felt, snug, supple yet had a certain strength about them. If you wear Troy Lee Designs, then they are a very similar fit. Some gloves when I make a fist, feel like they could explode apart any second. These felt like they were made of sterner stuff, so no glove exploding going on here.

So, initial fist pump test done,  all that was needed was to take them out for a spin at the local trails to see if they would perform. Yeeeew! 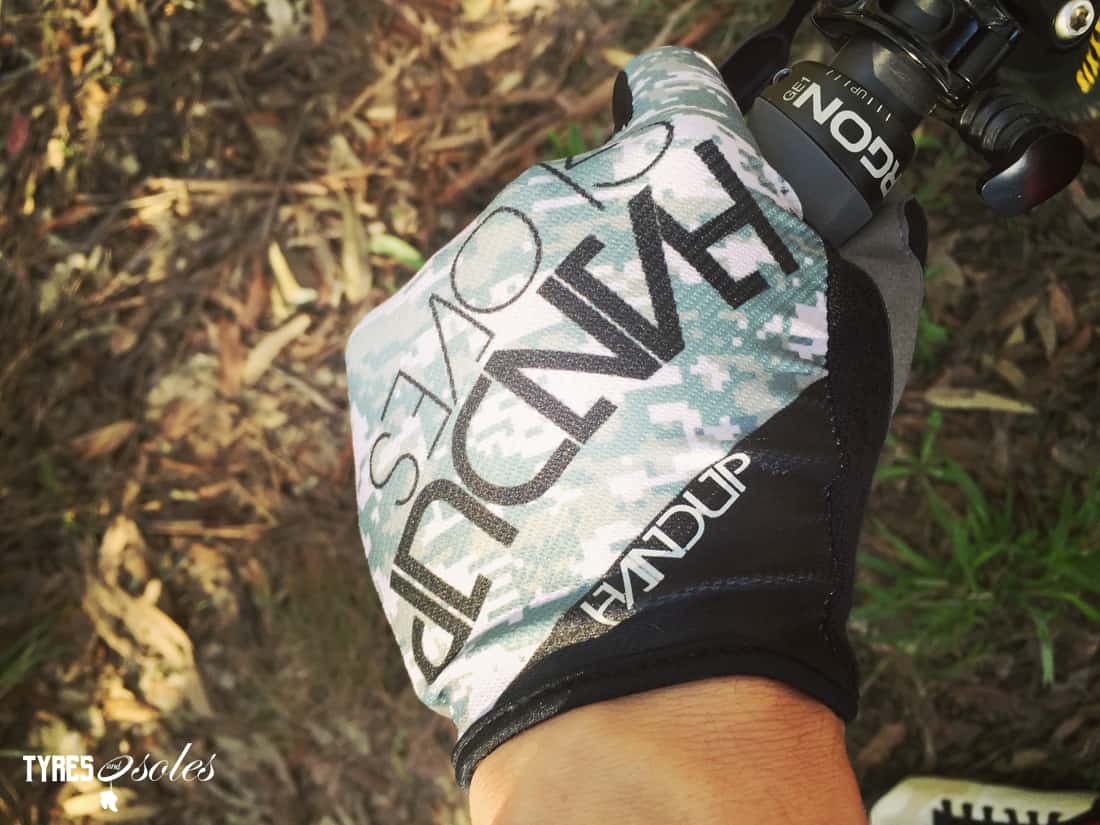 On the trails, the bar grip felt good, with enough feedback due to the soft leather palm which reduced any material bunching.  I don’t like gloves that bunch up, it tends to cause blistering on longer rides, but there was no such issue with these.

I particularly liked the sticky silicone printed graphics on the palm of the gloves, which added some extra grip. I was concerned that they may heat up on longer rides because the material feels quite substantial, but I had no issues at all with overheating, which I put down to the laser cut ventilation holes on the palm, helping the breathability of the glove.

To my enjoyment, the gloves turned a few heads on the trails with their unique styling. I have to admit, it makes a change to see some new products on the trails and I was more than happy to chat to fellow riders about them.

Although these didn’t come with wrist clasps or straps, I never felt like they needed them. They certainly never felt as if they were going to slip off at any point. They were easy to pull on and off with a neat little pull tab on the wrist and the lightweight mesh on the back of the hand was stretchy enough to avoid any tearing.

During the ride, I bashed my hands a couple of times on trees going through some of the tighter sections, but no tearing or any significant damage was done. I’ve done the same thing with some very well known brands and they’ve literally ripped open. I appreciate not every tree bashing is the same every time, but these just seem to cope better than some other gloves out there. 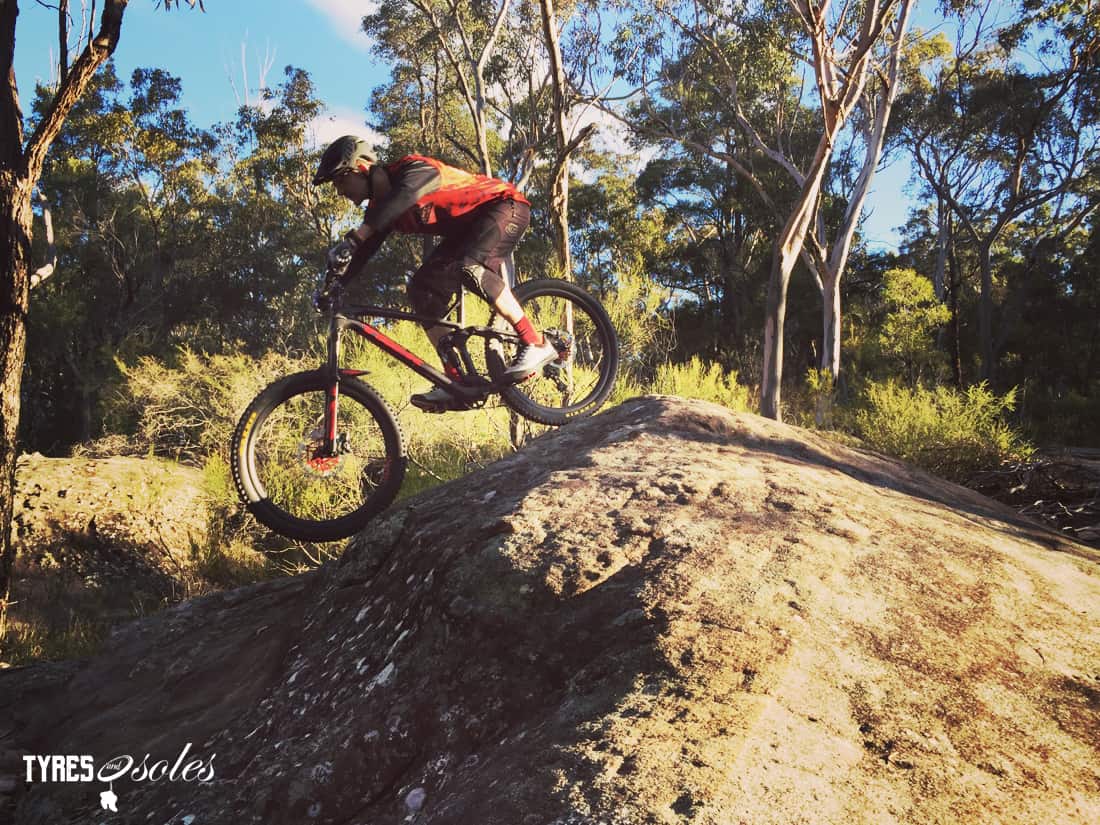 HANDUP GLOVES in action on the local trails. Pic: ©Tyres and Soles 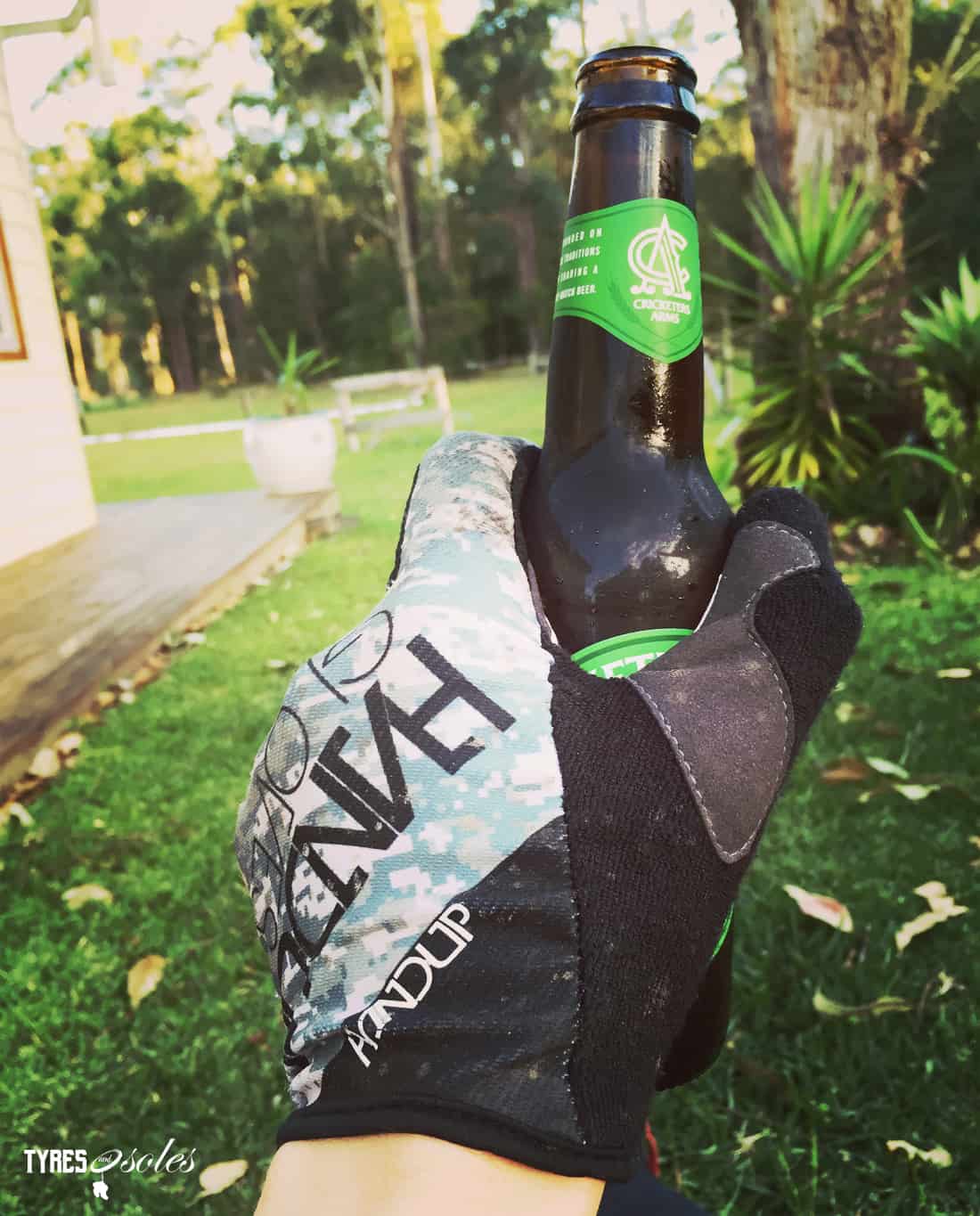 At the end of the ride my hands were feeling pretty damn good. No hot spots or blistering and the construction was still in tact even with a few tree bashes and overall bar feedback and sensitivity was good. I was really impressed with the huge sweat cloth section on the thumb in wiping the stream of sweat coming down my face. I can’t think of another glove that has one this efficient.

It’s early days, so I’ll report back after a few more months of riding and washing machine sessions. But all in all, a bloody great set of gloves for a smidgen under $40 and do exactly what they say on the packet… best for grabbing’ bars n beers!

Where to get them: FullBeam Australia

Clever is as clever does with the Granite...