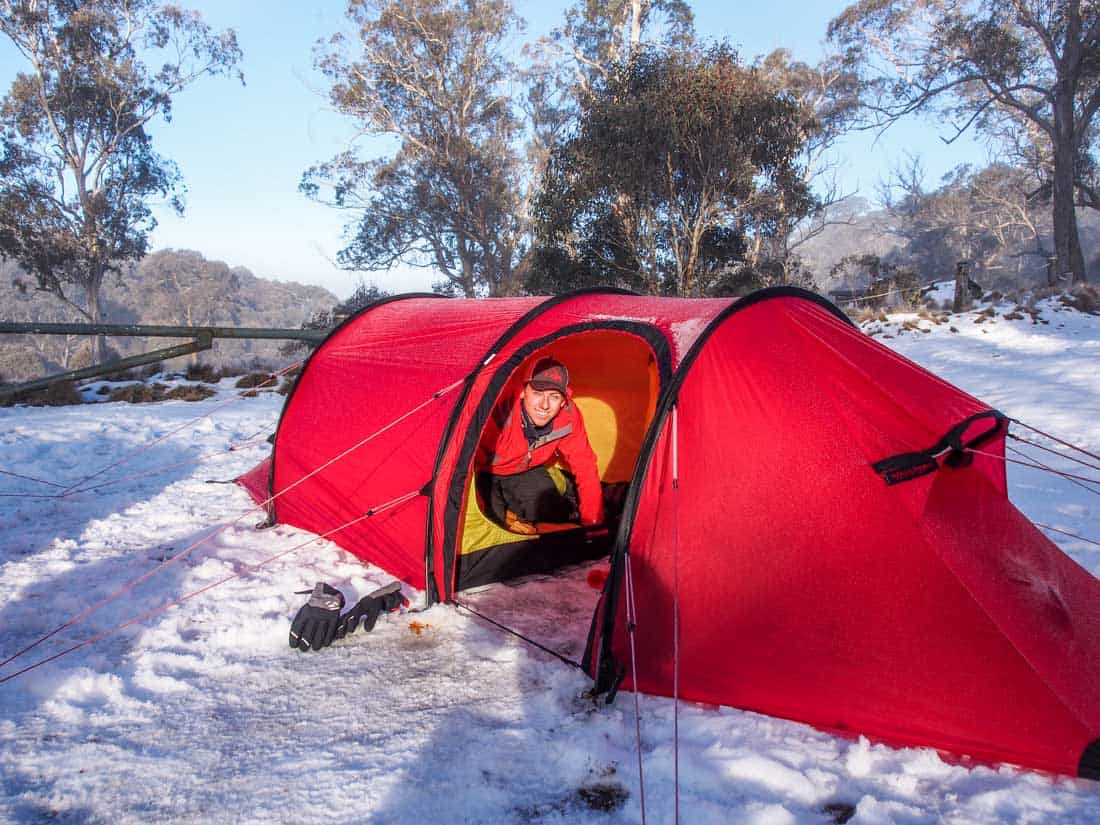 Going somewhere you’ve never been before can be exciting, especially if you don’t quite know what to expect. This is what I love about hiking.

There’s a certain unknown when venturing out on a new track, even if you’ve done your research beforehand; you never know what you might find. Whether it’s stumbling across a small hut off the side of the track, or realising that the way you were initially going to tackle a river crossing probably isn’t the best option, or almost being rammed down by a pack of dirt bike riders; going out to a new place always comes with its surprises and its rewards.

These experiences are reminiscent of a hike I did last winter with two of my closest friends Josh Flavell and Hollee Simons through Barrington Tops National Park, NSW.  All semester when we probably should have been studying, we were eagerly drawing up routes of hikes we had planned to tackle during the holidays and this was the one we were looking forward to the most. 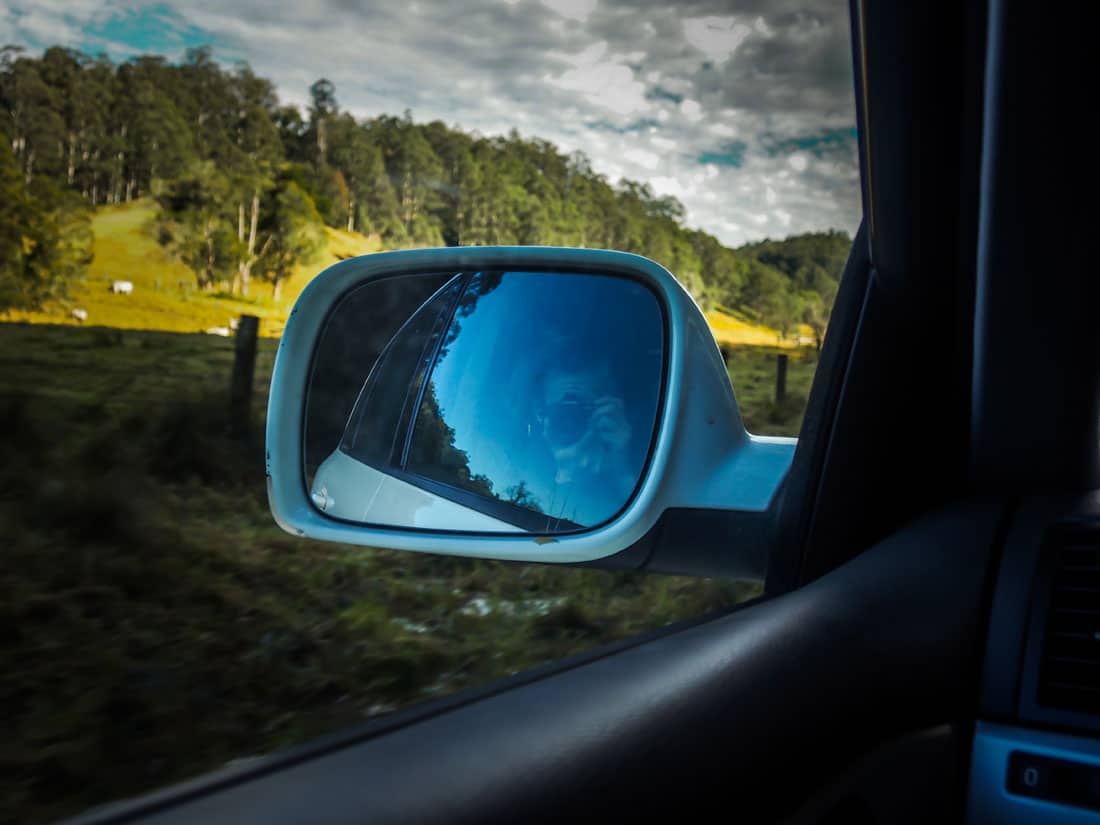 The drive was long but definitely worth it! Pic:©Daniel Joller

After the 3 hour drive from Sydney up to the starting point, the trip involved a 3 day trek through the National Park. Upon parking the car at around 400 metres above sea level, we were faced with a steep 10km climb up the Corker Trail to Carey’s Peak, situated just above 1540 metres in elevation. This made for a killer first day, with probably not one flat section of trail until we reached the top. It was incredible to see the amount of snow build up as we climbed higher above 1000 metres. We knew it had been snowing there previously, and we had been told by a couple of rangers that there was still plenty of snow up on the peak, but we weren’t expecting to be hiking in ankle deep snow for the last part of the day. 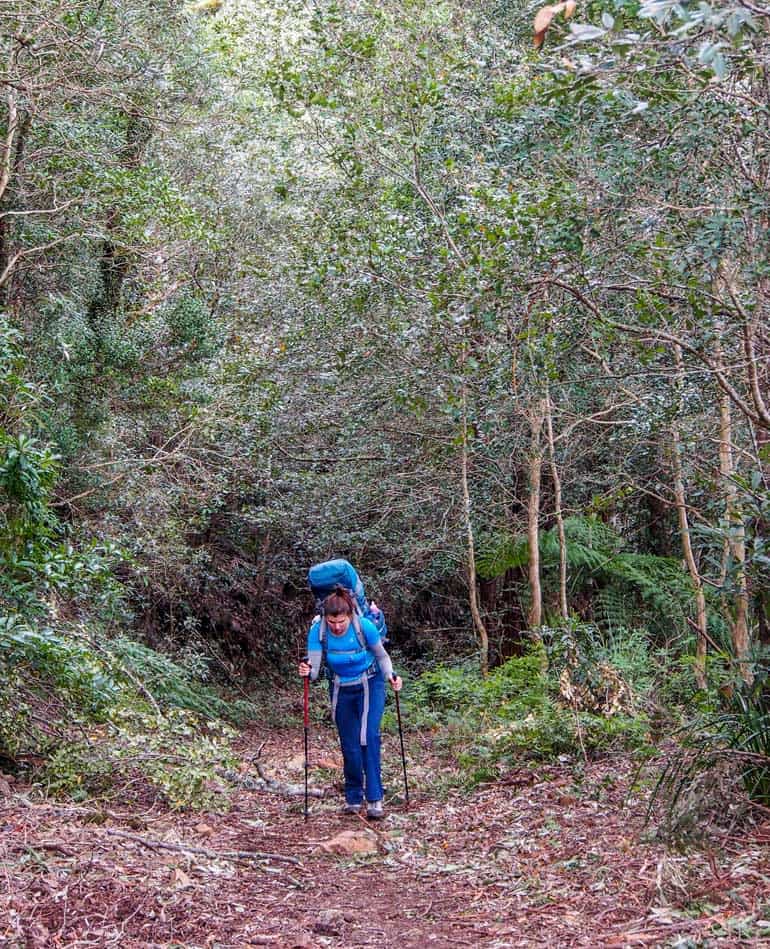 The Corker Trail. A steep 10km climb up the to Carey’s Peak. Pic:©Daniel Joller

In addition to the amount of snow there was, one of the rangers brought to our attention that there was a little hut nestled down a side track along the climb up to Carey’s Peak. We would have missed it if we hadn’t have randomly stopped for a rest and happened to find ourselves in the exact place where the side track was hidden. Hollee did a great job of spotting the tiny gap between the trees where we could bush bash our way to the hut.

The “Selby Alley Hut” was a small timber hut, no doubt used by a number of hikers as a retreat if the weather turned south during the Winter months. There were remnants of matchsticks and a few Stella Artois bottles to remind us of the people who have sought refuge here. We even found an unopened freeze-dry meal which we were tempted to claim, but decided to leave it for a potential fellow hiker in much greater need of it than we were. Spending a short moment in the hut to reflect made us realise how lucky we are to be able to do these treks with such high-tech and comfortable gear. 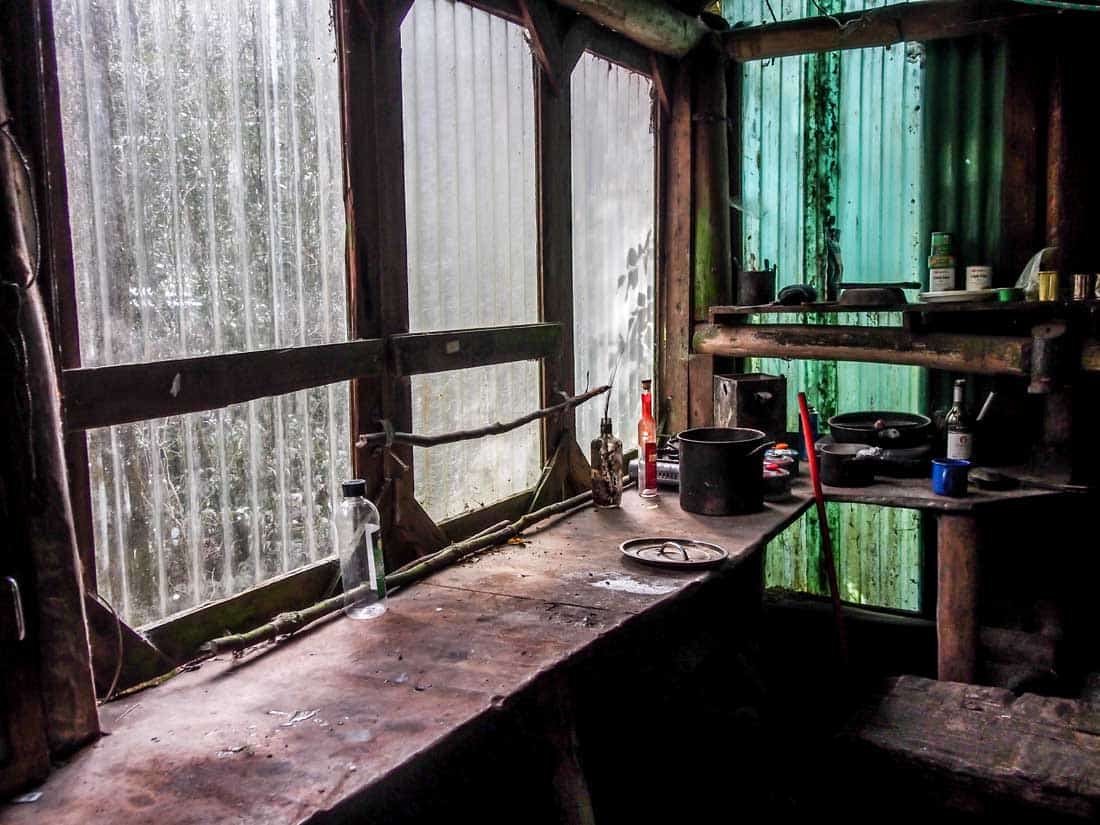 The “Selby Alley Hut”. Can be used as a retreat if weather turns south during the Winter months. Pic:©Daniel Joller

We continued to climb for a further 4 km with the snow getting thicker around our ankles until we reached Carey’s Peak campground relieved and exhausted. Tents were pitched in the snow and we settled in for a chilly night. During the night we could hear the whistling of the wind across Carey’s peak, but luckily we were sheltered in the trees that surrounded the campground.

Waking up after a cozy night’s sleep, we were faced with a flat day walking along the ridge of the mountain to our next campground at Junction Pools. So we rugged up for a cold day of hiking along a snow-covered trail. 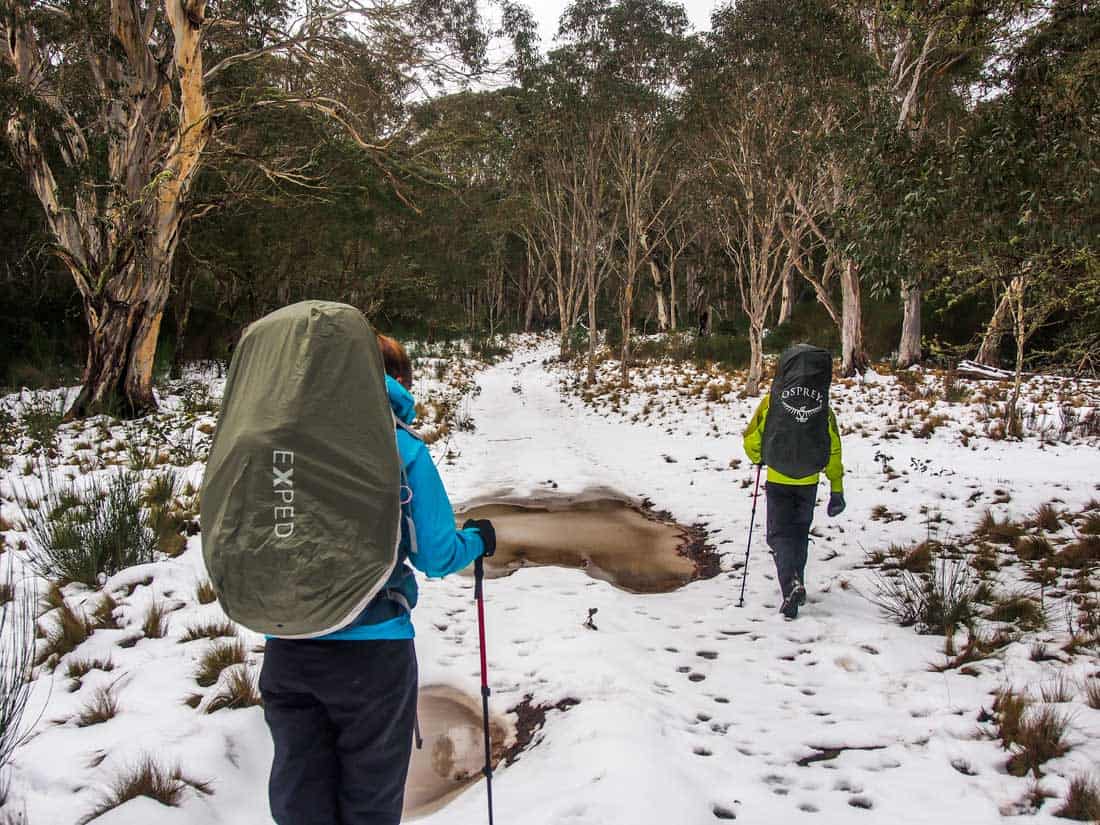 Rugged up for a cold day of hiking along a snow-covered trail. Pic:©Daniel Joller

A small tip for Winter Hiking: Well, this is more of a tip for hiking in general, but it’s amplified in colder temperatures: Dress so that you start the day cold. All I wore on my torso in sub 2 degree temperatures was a T-Shirt and a Gore-Tex Pro outer shell. I tend to sweat a lot when I exercise, and so if I can minimize the amount of sweat I produce without being freezing, that means I am comfortable all day. The Gore-Tex jacket does a great job at keeping the wind out and preserving your micro-climate, and if you sweat, it’s able to get rid of a lot of the moisture. Being dry and warm means being comfortable, so layer your clothing so that you’re slightly cold before you start walking.

Our second night up in the National Park was significantly colder than the previous one. So cold, in fact, that most of the water in our bottles had frozen overnight. I remember reaching up to the clothesline in my tent and feeling my now frozen solid socks that I had left out to “dry” the night before. Lucky I had a few spare pairs in my pack! Breakfast was the usual Weet-Bix, sugar and dried fruit, and thank goodness my milk hadn’t frozen! Josh had brought some Nescafé Cappuccino pouches which, when added to a cup of hot water, gave me just enough motivation to crawl out of my sleeping bag.

Morning of Day 3. The smell of coffee will lure any hiker out of their tent. Pic: ©Daniel Joller

The first kilometres of our final day of hiking meant crossing a river and climbing yet another hill up to a peak called Aeroplane Hill. The name was given to the hill after a RAAF Mosquito Bomber crashed there while flying through poor weather conditions during the Second World War. Since then, passing walkers had picked up pieces of the wreckage as souvenirs so now all that is left is the name of the hill to remind us of the tragedy. 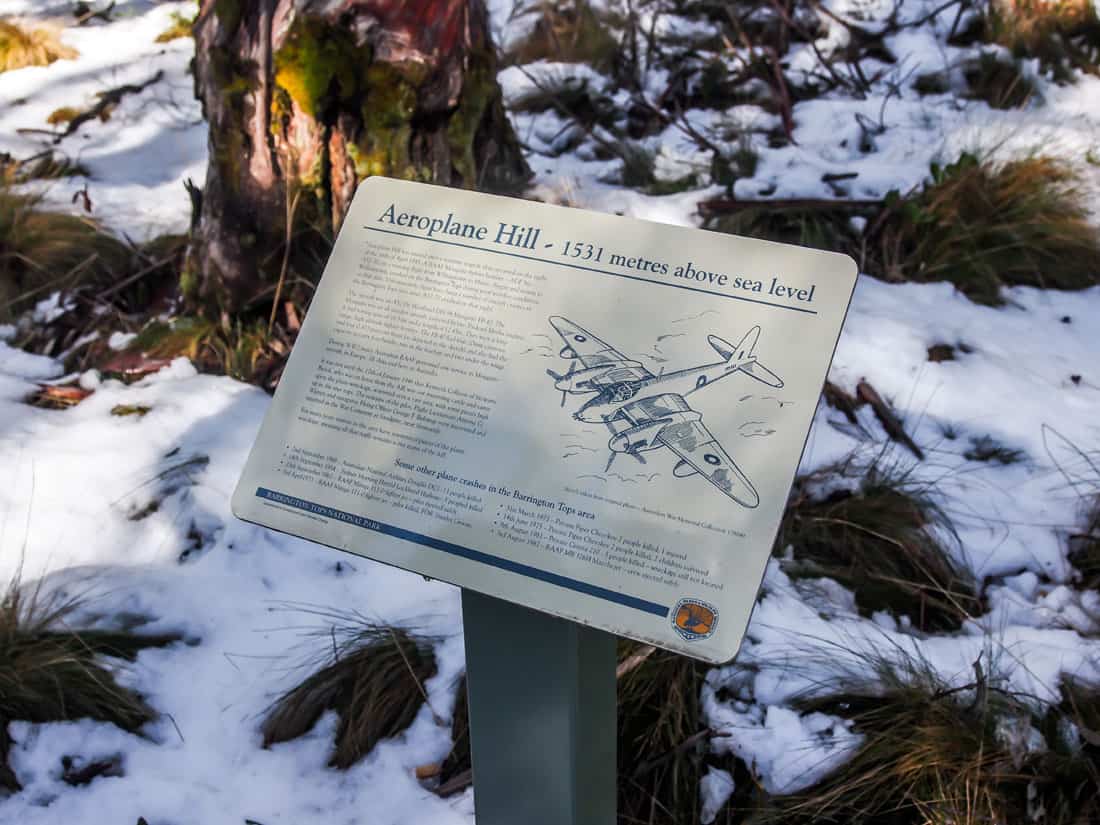 Aeroplane Hill, but no plane in sight. Pic: ©Daniel Joller

We started our descent of the Corker trail with about 9km to go, and just as we had seen the amount of snow increase on our way up, it was the opposite on the way down. The further down we went, the greener the landscape became. While stopping for lunch about half way down, we were stunned to hear the unmistakeable sound of dirt bikes and decided it might be a good idea to hop out of the way. Sure enough, 3 dirt bike riders emerged from the distance and quite surprisingly, they stopped to have lunch with us! I can’t for the life of me remember their names but they turned out to be 3 super chilled guys who just like riding their bikes. We sat there chatting for about half an hour before they got up and mounted their bikes and sped off into the distance.

The rest of the descent was really hard on the knees and the three of us were suffering pretty badly on the way down but soon enough, we reached the car and got the chance to slip into our Uggs and give our feet a rest.

We will definitely be returning to Barrington Tops National Park next winter for another epic adventure!

For details on the Corker Trail, visit the National Parks NSW website: https://www.nationalparks.nsw.gov.au/things-to-do/Walking-tracks/Corker-trail

Feel free to follow myself, Josh and Hollee on Instagram for more photos of this and other trips we’ve done!

How to Deal with Periods When Hiking