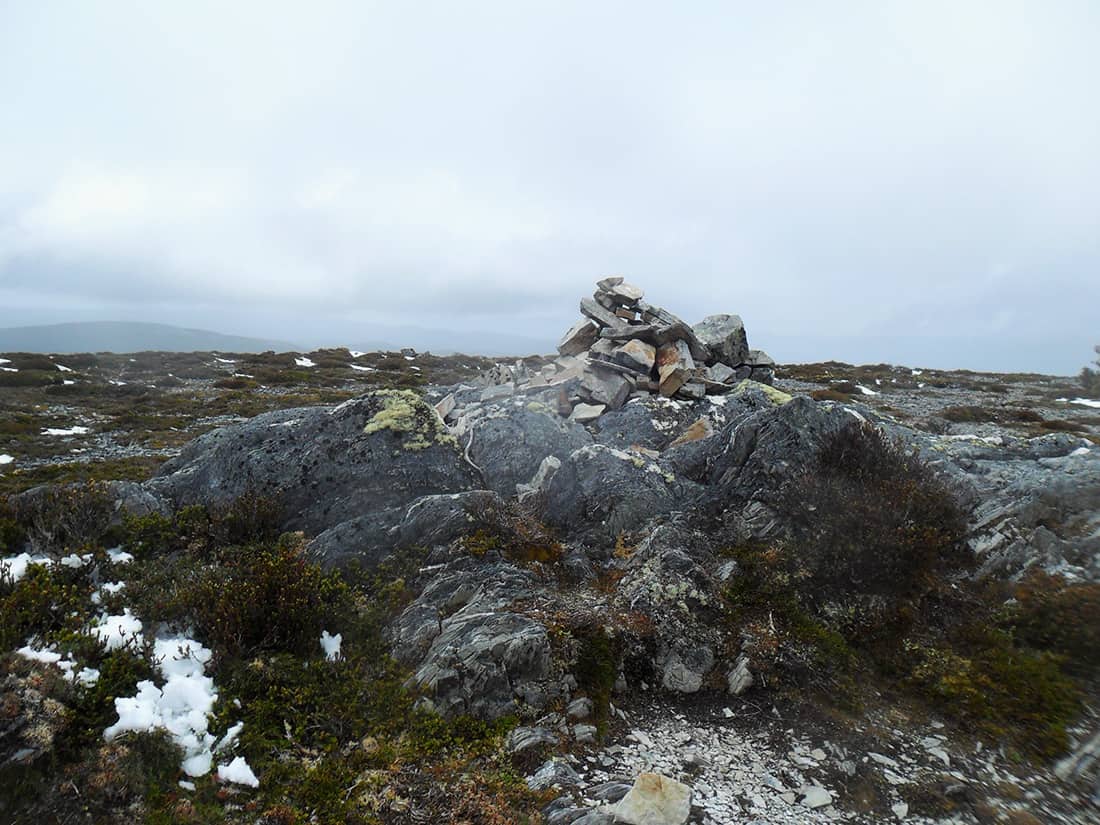 I believe there’s an adventure bug inside all of us.

It lies dormant within the human spirit. Some will never discover it, while others will dedicate their life to pursuing it. As adventurers, some things just make us tick. That little adventure bug starts pounding on the walls of your chest. It wants to escape and run rampant.

I remember my first night at Cradle Mountain. For so long I had dreamed of our big adventure through the heart of the Reserve. The dawn would bring with it the start of our Overland adventure. But nothing was going to keep that bug from breaking out. I was off and running. I legged it to the visitor centre, boarded the next shuttle, and the rest was history.

Before Cradle even came into view, I was captured by the broad, rounded dome of Mount Campbell. When the bus driver pointed it out, the bug in my chest began thumping harder than before. That was my destination – my first little taster of proper Tasmanian adventure, and I was excited.

The only other sound to be heard was the wind as it rippled through my jacket and whistled in my ears.

Cradle was perhaps the most beautiful thing I had seen. Its faces glistened with pure white snow, and mist danced and twirled around its many peaks. I gave the mountain a nod, and I’m sure it understood – tomorrow we would spend some time together. For now, I began moving swiftly around the shores of the pretty Lake Dove. 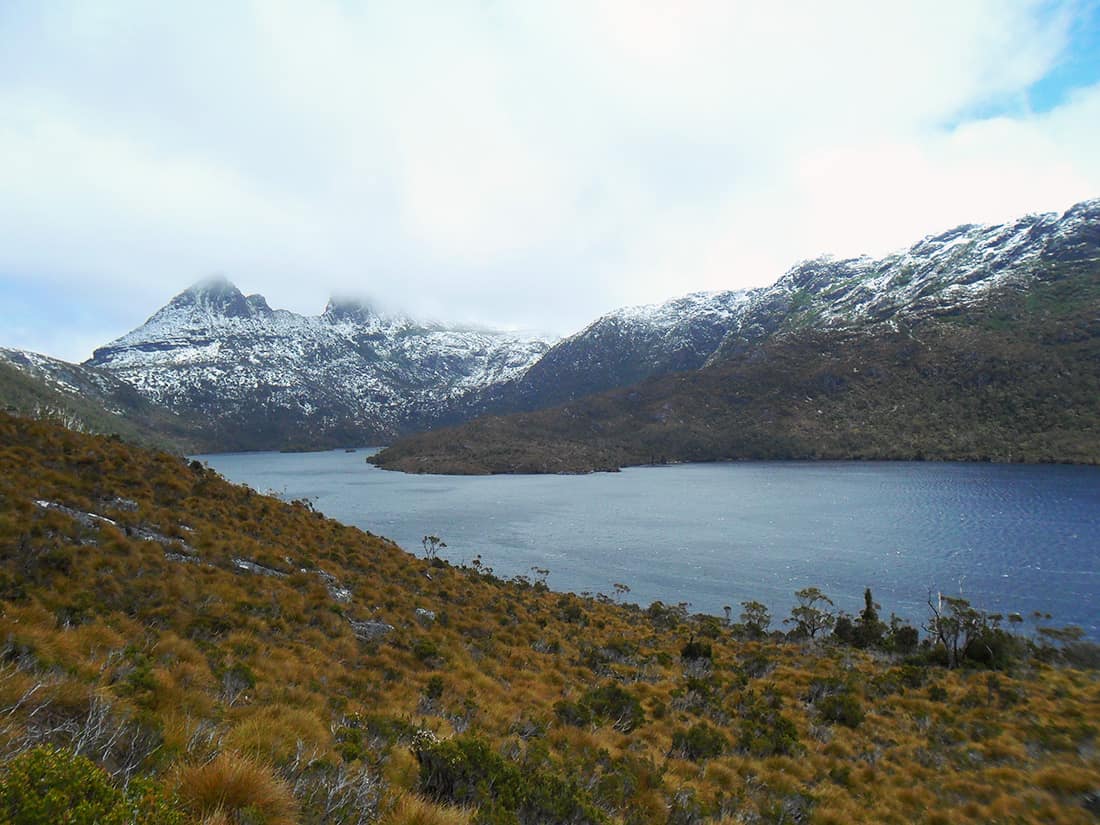 Grey clouds encompassed the skies above, but the tourists were still out en masse. I was thankful to leave the popular Lake Dove Circuit and head up onto the Lake Rodway Track. I was alone again, in this awe inspiring landscape. The mountains and lakes all around truly had me feeling like a kid in a candy store (I know, heavily overused cliché).

Making it onto the broad summit plateau, there was nothing to stop the elements from having their way, as an icy wind blasted my face.

A rough pad headed up to the Mount Campbell summit. The loose scree felt good under my boots. It’s hard to describe the sound that scree makes underfoot, but it sure was satisfying. The only other sound to be heard was the wind as it rippled through my jacket and whistled in my ears. 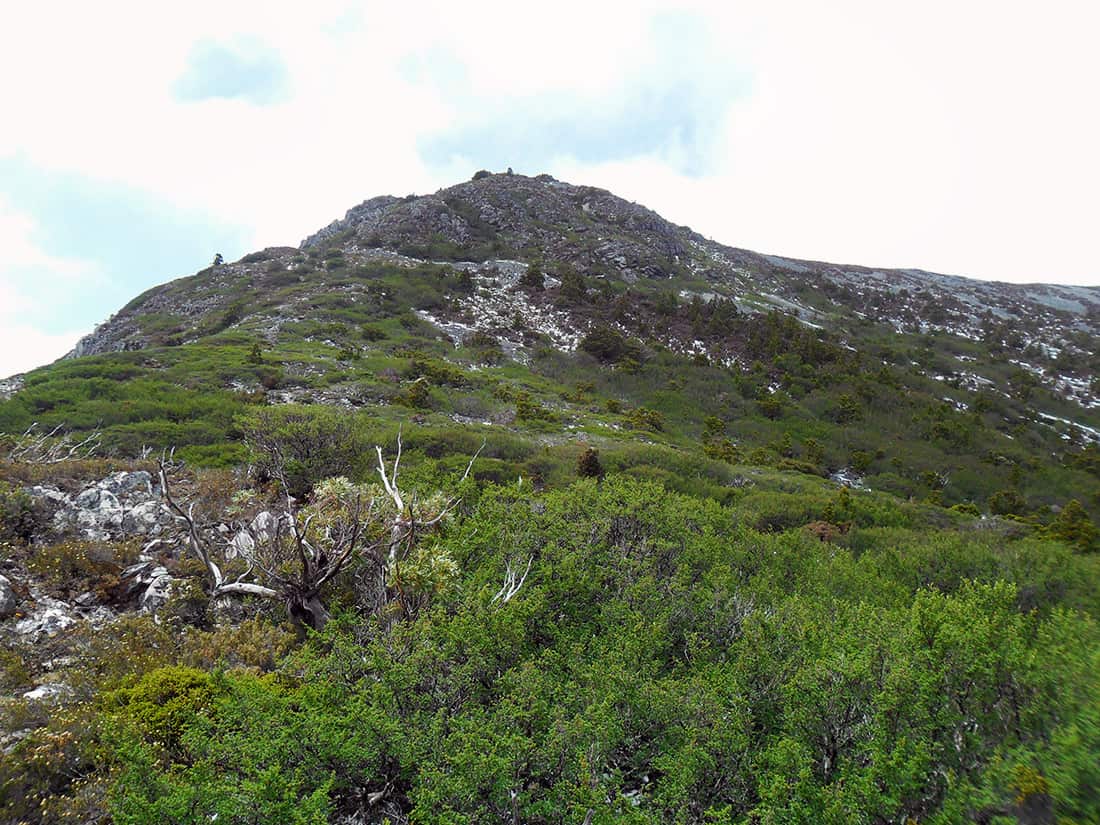 Making it onto the broad summit plateau, there was nothing to stop the elements from having their way, as an icy wind blasted my face. I made for a small outcrop that lies by itself in the centre of the plateau.

I did what any modern solo hiker would do upon reaching a summit, and whipped out my camera to take a number of selfies while my face froze into an ice block. 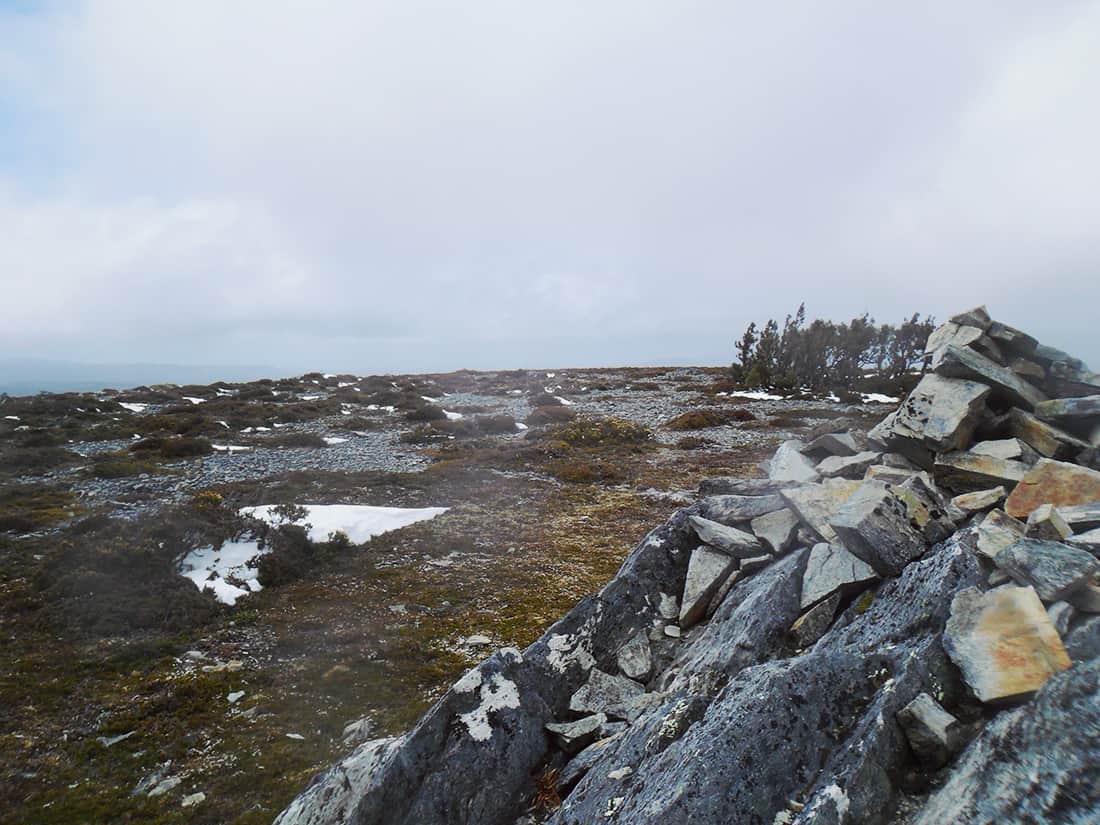 Everything became so clear in that moment on the summit, a life of adventure was never a choice I had to make. It was chosen for me.

Despite the strong wind battering me from all sides, I felt so peaceful and calm. I was all by myself, on top of a mountain, while icy spindrift blew up and stung my face. I wouldn’t have had it any other way. Mount Campbell is only a short walk from the bustling tourist centre of Lake Dove, yet I can guarantee that you won’t find the hordes up there. It’s a real gem waiting to be discovered. 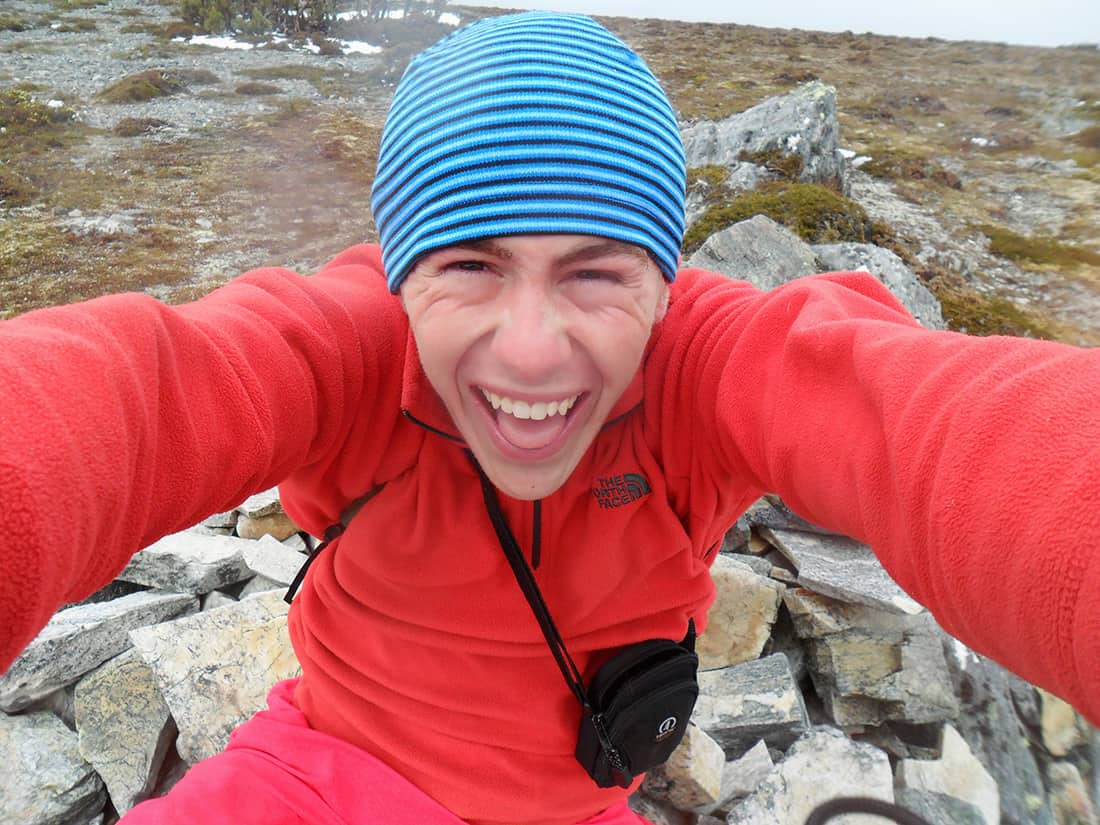 For me, it holds a special place now. It was my first peak in Central Tasmania, and as it turns out, my first Abel (Abel, you ask? Click here). Most importantly, that little adventure bug was brought to life again that night, and it didn’t go away.

It was the start of a new chapter in my life. Everything became so clear in that moment on the summit, a life of adventure was never a choice I had to make. It was chosen for me. That’s what the adventure bug is capable of. Some people just need a little help to find it. 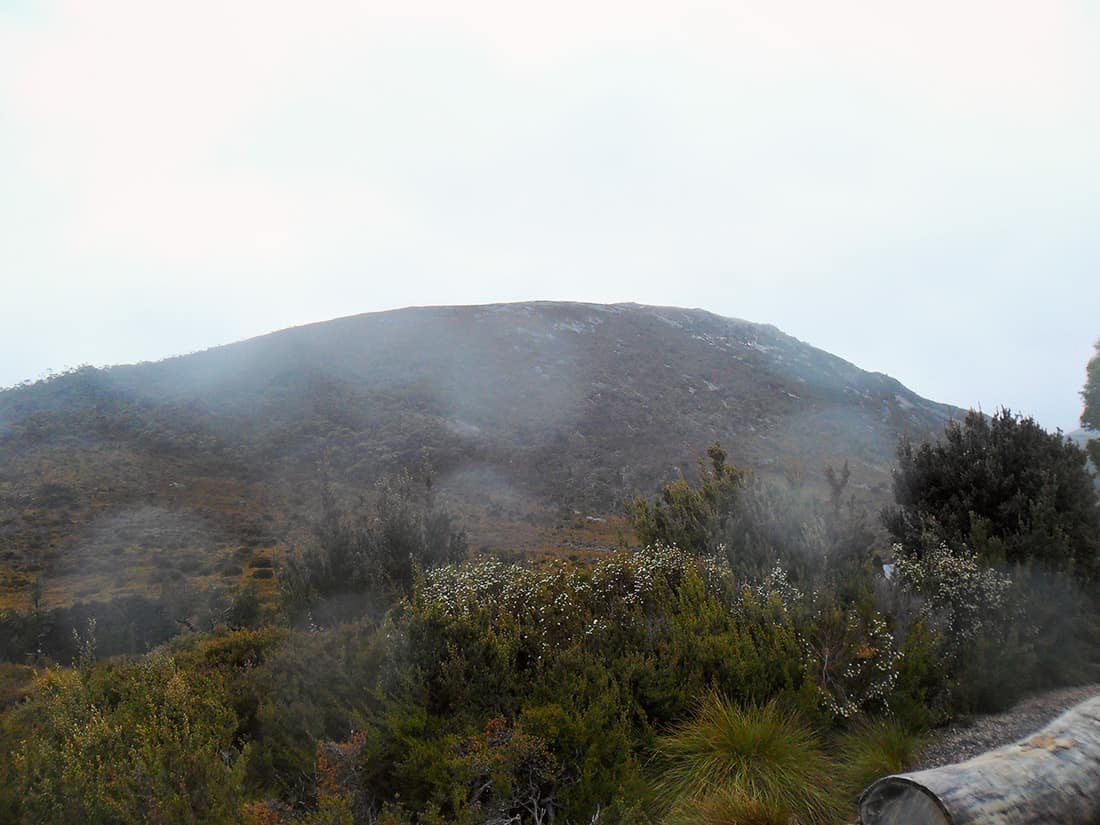 Sam is currently studying a Bachelor of Outdoor and Environmental Education at Federation University. He is an aspiring adventurer and outdoor leader and enjoys sharing his passion for wild places through writing. See more of his work and get in touch via his blog at Sambo Christie.

7 Things To Remember When Taking Kids On...