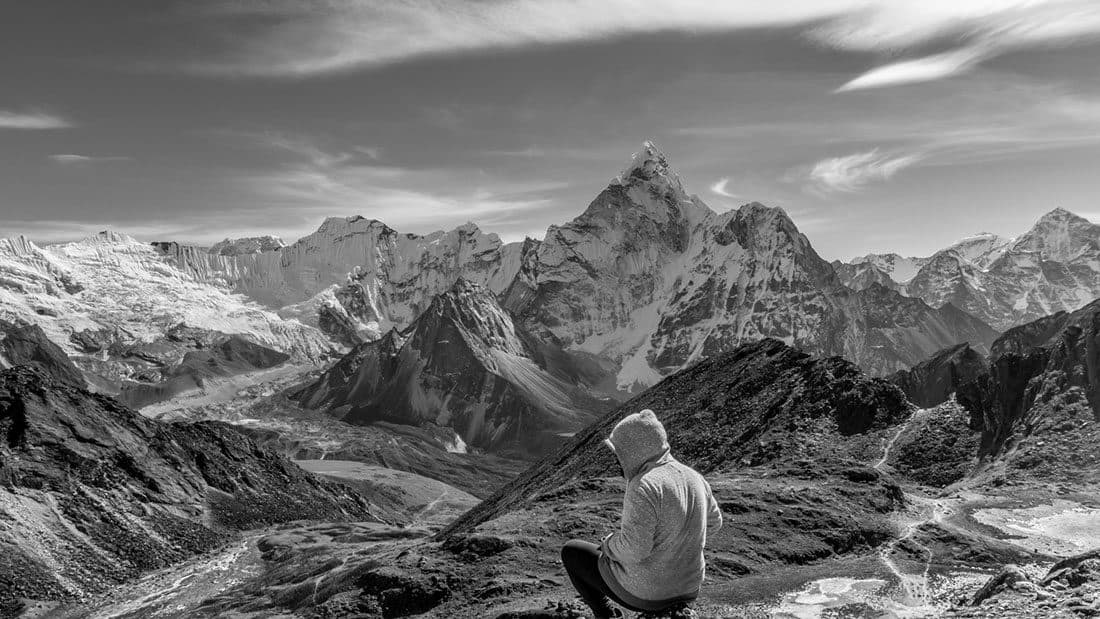 In 2015, some friends invited me to the Cathedral Ranges, 120 km north-east of Melbourne, for the day. Having never hiked before, I instantly fell into a deep love affair with mountains.

Over the next three years, my passion led me all around Australia, but the Australian Alps was where I felt most at home.  In February 2017, I walked the Annapurna circuit in Nepal and there saw my first eight thousand meter giant, Dhaulagiri.

A few weeks after returning to Melbourne, I had a drink with an old friend of mine.  I sat in awe as he recalled memories of climbing in Russia, Bolivia, Peru and Africa and as I walked home, I realised I had no reason to wait.

Within days, I had chosen my first challenge, Imja Tse at 6189 meters.  I’m not a mountaineer, and an athlete is not, nor has it ever been a term one would use to describe me but I was determined to try.

I knew that the altitude would demand my respect and while this was going to ask a great deal of me, my hope was that it would provide me with an opportunity to explore the very edge of my limits and understand if this was something that would resonate with me, or if I had just read one too many books.

Together with Megh, a Nepalese friend I met while hiking the Annapurna Circuit, we began planning a route through the Sagarmatha National Park over email.  We resolved to hike over the three passes Renjo La, Cho La and Kongma La before attempting to climb Imja Tse.  I booked my flights, paid for my permits and before the end of the year I was on my way back to Nepal.

From the window of the plane, I saw for the first time, the sprawling bulks of Everest, Lhotse and Makalu. Bathed in the brilliant reds and yellows of a Himalayan sunset, they were no longer pictures on a screen or words in a book; I stared transfixed as their silhouettes slowly faded into darkness.

Megh picked me up from the airport after I landed and together, we drove to the hotel where we had a beer and talked into the night.  It was about 2am by the time I finally fell asleep; my mind racing with the anticipation of what was in front of me.

“a cacophony of horns, music and crowds and I had deeply missed it.  Standing on the precipice of adventure, I felt alive”

Kathmandu took on a more familiar feeling this time as I walked the busy streets and alleys. Enthusiastic vendors sold everything from intricate works of art and artifacts of religious and spiritual significance, to meretricious souvenirs.  I was accountable to and for no one, and enjoyed the city with unalloyed enthusiasm.

That night, before the flight to Lukla, I sat on the rooftop of the hotel for hours savouring the sounds of Thamel; it was a cacophony of horns, music and crowds and I had deeply missed it.  Standing on the precipice of adventure, I felt alive.  The cobwebs in my brain had blown away – and the blood coursing through my veins seemed to carry with it an energy propelling me forward.

On Our Way to Namche Bazar

After landing in Lukla the next morning, Megh and I went to a local tea house for breakfast and there, we met Indra who made up the third and final member of our group.  Indra and Megh have been hiking these trails together for close to 30 years.  It was incredibly endearing to see how deeply they cared for one another and how well respected they were as guides all over Nepal.

I hadn’t had the opportunity to see this camaraderie on my previous trip as the experience was somewhat sterilised by the process and procedure of a guiding company.  To be afforded such an intimate look into their lives was a sincere privilege, and the friendships I forged with these men will be something that remains with me for the rest of my life.

“In the evenings, the stoves radiated with a familiar warmth that was deeply comforting while, outside, frozen winds howled through the valley”

We first stayed in Phakding overnight before hiking to Namche Bazar at 3440 meters.  Carved into the side of a crescent shaped slope, Namche Bazar is the main hub of the region.  Hikers travelling deeper into the park often stay here for two nights or more in order to acclimatise and make any last minute purchases before continuing.

The tea houses were all fundamentally the same. There was a kitchen that served a basic but hearty menu, a dining hall with a small stove fuelled by wood and yak dung, and modest wooden cabins.  Mornings were serene.  Yak bells always seemed to be tinkling in the distance, and the crisp air smelled of pine and juniper incense.

During the day, the trails were dusty and hot with villages usually not more than an hour or two apart. In the evenings, the stoves radiated with a familiar warmth that was deeply comforting while, outside, frozen winds howled through the valley.

“I stared at Everest through eyes glazed with tears. Plumes of snow and ice issuing from its summit like a long, silk scarf”

As the altitude increased, the rhododendrons and pine forests were replaced by undulating dunes of gravel, sand and rock, pulverised by earthquakes and glaciers. Climbing as much as 500 meters on some days, my body took time to adjust.  At 5360 meters, Renjo La was the lowest of the three passes and the first significant hurdle of the trek.

From the little village of Lumde, the path took a long, sweeping curve to the east, and steadily carved its way up through the valley before abruptly and steeply rising over the saddle and descending down to the shore of Gokyo lake.

From the top of the pass, I stared at Everest through eyes glazed with tears. Plumes of snow and ice issuing from its summit like a long, silk scarf – just as Krakauer had described in his book “Into thin air”. That day took a lot from me, and after thirteen incredibly long hours, I walked through the doors of the Gokyo inn and sank into a chair.

I sat by the fire until late into the evening reading Harry Potter, exhausted and wondering whether I had already reached my limit.  Eventually, I migrated to my room, slid into my sleeping bag and utterly depleted both mentally and physically, fell into a deep sleep.

Preparing For The Next Major Hurdle

The next day, Indra and I climbed Gokyo Ri, a vantage point just west of the Ngozumpa glacier.  Its size and scale seemed incomprehensible as incredible volumes of rock were slowly being ground up by giant blocks of ice forcing their way through the trench.  To the west, the glacier drained into a stunning lake filled with sapphire blue water and nestled in-between, lay the little hamlet of Gokyo.

After a good night’s sleep, we left Gokyo and followed a faint gravel path peppered with stone cairns as giant slabs of ice groaned and creaked in protest under our feet.  We reached Thangnak shortly after lunch and spent the rest of the day preparing for the next major hurdle, Cho La.  At 5420 meters, it was higher than anything I had previously climbed and while I felt significantly better, I was genuinely nervous.

We woke up at 5am and travelled east, steadily climbing up towards the pass as thick blankets of mist diffused the golden light spilling into the valley.  The climb was by no means easy but my legs weren’t burning, and my lungs weren’t gasping for air.  I cannot explain the sense of relief that washed over me; I was not ready to go home.

The moment I got down from the ice sheet at the top of Cho La, I was greeted by a mountain that offers some of the most spectacular views I’ve ever been privileged enough to witness.  At just 6812 meters, and even with a skyline that included Nuptse, Lhotse, Makalu, and Everest, I stared in awe at Ama Dablam.

I think I sat there for two hours, watching the last rays of sun gently fade from its fluted ridges as the pink and purple hues of twilight slowly began to emerge.  It’s gorgeous from the north.  The pyramid summit comes to a point that looked so sharp that it could have pricked my finger and its slopes offered impossible, thrilling routes.  I imagined what it would take to summit Ama Dablam, and the euphoria of those who do.

From Dzongla, a small village 4830 meters above sea level, we hiked to the edge of the Khumbu glacier and stayed the night in Lobuche before crossing it towards Kongma La.

This pass, at 5540 meters, is the highest of the “Three passes” trek.  Almost immediately after crossing the glacier, the path rose sharply towards the top of the pass and from there, I got my first glimpse of the thin, slender summit ridge of Imja Tse, 6189 meters above sea level.

We arrived in Chukhung that evening, and made the trek to base camp the next morning.  Indra and Megh left me at basecamp with Ang Phura Sherpa while they went back to Chukhung to wait.  At 1am the next morning, we left camp for our summit push.

I didn’t make it.  With less than 5 meters of visibility, a persistent nose-bleed and a path that was being blasted by icey winds coating the rocks in a glassy veneer, I knew that even if I got to the top, the way down would be a risk that I was not prepared to take.  So, at 5800m, I turned around and returned to camp.

“I’ve realised that limitation is a companion that evolves with you, rather than an enforcer of an arbitrary line you cannot or should not cross”

Fear is healthy, I think.  It tempers ambition with common sense.  I’m grateful that I got an opportunity to experience this because now I know what will be required to succeed, but also what it takes to prevent ones ego from obfuscating or outright ignoring the realities of being on a mountain.

As I walked away from Imja Tse, Ama Dablam once again took my breath away.  From the west, it looked like a technical masterpiece with ice encrusted faces that we’re almost vertical, and ridgelines which rose sharply to the summit.

I’ve realised that limitation is a companion that evolves with you, rather than an enforcer of an arbitrary line you cannot or should not cross. I have found the confidence to move past the yellow routes, and to not fear failure, but embrace its lessons and learn from them.

My passion for climbing is real and my time in the Sagarmatha National Park helped me truly appreciate that. I thought that perhaps my reading of all these great mountaineers had just imbued me with a vicarious longing for adventure.

I thought that maybe I had simply read one too many books written by my heroes, but to feel that thin, frozen air fill my lungs and look out over that incredible, serrated horizon – I’m filled with an energy that nothing else can compare to. 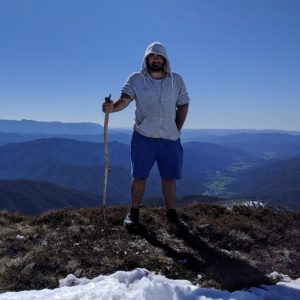 Steve Kissonergis
I am an IT professional during the week, but every weekend is another adventure.Whether it's wandering around a local state park, climbing a peak in the middle of nowhere, or just taking the opportunity to explore - every experience is cherished and deeply appreciated.

Outside of hiking, I am addicted to barbecuing, woodworking and a decent book but ideally, my passions are most powerful and rewarding when enjoyed together, and with friends! 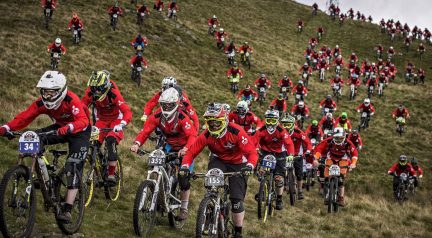 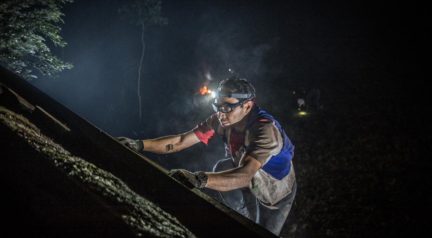