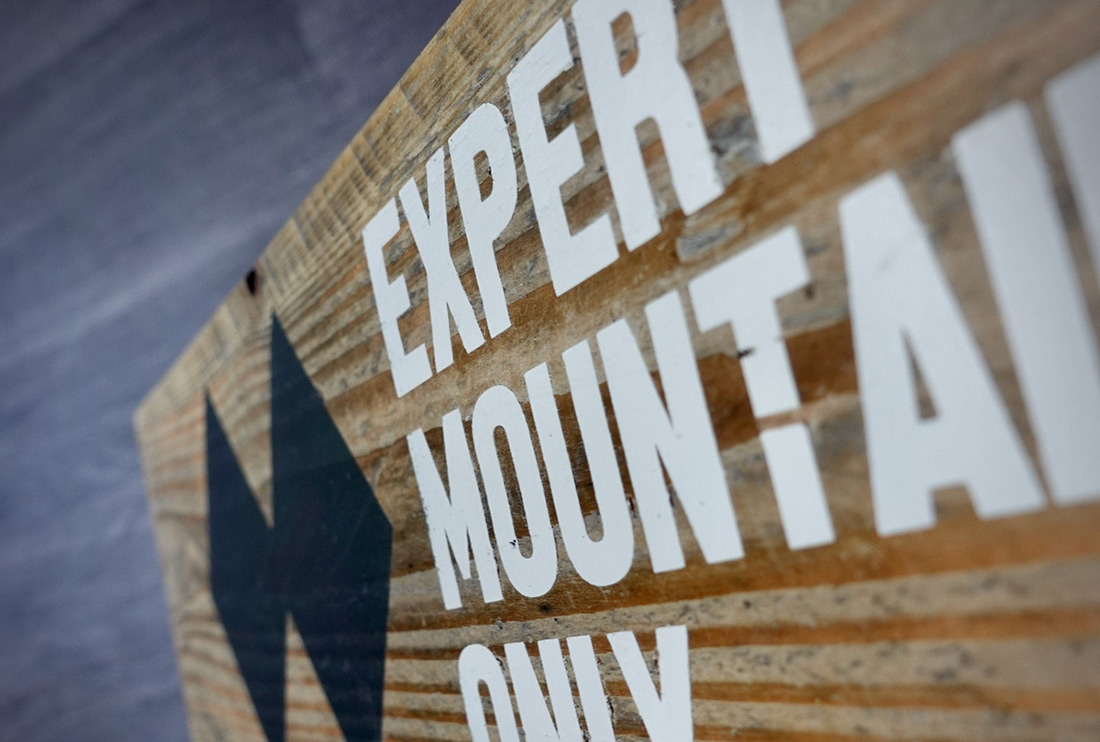 Why I’m Changing My Relationship with Mountain Biking

Four years ago, I hiked up a new MTB trail in my area. It was steep and scary, and halfway up there was a large drop with a sharp berm straight after the lander. I looked at it and said “nope”. A month ago, I finally rode the drop perfectly. Then I went back to do a second run, took the drop too fast, and hit the berm for an OTB and a broken wrist. Pain, surgery, and all the challenges of not being able to ride, cycle commute, or drive ensued.

For the last 25 years, my relationship with mountain biking has largely been one of dissatisfaction. I love the sport, and pretty much everything it entails, but I’ve always felt an internal pressure to be better: fitter, stronger, more technically competent. Over the years, this has resulted in a huge improvement in my skills, but the drive has also come with a large number of minor and major injuries.

The constant pressure to ride better has also resulted in ironic stress: despite the fact that I use mountain biking to manage my stress levels, the internal pressure to be on the bike, riding hard trails and features, and constantly pushing my skill limits, is inherently stressful. Instead of looking forward to my rides, there’s always a mild sense of dread. Sure, I feel great when I get home (uninjured), or when I negotiate a challenging feature, but that buzz is suspiciously like a drug high – it only lasts a little while, and then I’m feeling torn about the next ride. I know I’m not alone with this conundrum.

So, after this most recent injury, I’ve made a big decision: my days of double-black-diamond trails and constantly pushing my limits are behind me. I’ll sell my enduro bike and buy something that won’t easily let me ride the steep, scary stuff. Instead, I aim to focus on the aspects of riding that I’ve been neglecting (see below).

Deciding what mountain biking means to you…

We have already covered a fair bit about sustaining mountain biking, including mountain biking and aging, dealing with injury, and risk versus reward. Nevertheless, I’ve often wondered just how much choice we engage in when determining how we ride.

For many of us, our riding evolves from social riding and is largely determined by who we ride with. For guys, that’s often about seeking out bigger and scarier challenges, and those choices are reinforced by most of the media surrounding mountain biking. The DH World Cup, the EWS, Red Bull Rampage, and pretty much every product video, promote speed, big air, and pushing harder. There are some great YouTube counterpoints (e.g., Berm Peak, BCPOV) but, for the most, part, we’re saturated with gnar. So, until we’re faced with the consequences (usually an injury), we seldom give much thought to riding in a different, more sustainable, and enjoyable way.

There’s a lot of research on the most psychologically valuable forms of exercise. Typically, researchers have identified a few key areas: social engagement, nature immersion, adventure, and skills mastery. Let’s have a look at each of them.

This is pretty much a no-brainer. Mountain biking is inherently social, and it’s a fantastic way, not only of spending time with existing friends, but also for making new friendships. There is a potential “dark side”, especially around the (predominately male) culture of “just send it”. Nevertheless, there are many groups that meet simply to promote and support riding, and an increase in women’s riding groups (e.g., Shredding Betties) that encourage women to ride without perceived pressure.

Psychologists have studied the social elements of physical activity for decades. The consensus is that exercising with other people adds several layers of value. First, simply committing to another person (e.g., agreeing to show up for a ride) increases compliance; you’re just more likely to show up if other people expect you to. We’ve all had the experience of waking up to less-than-ideal conditions or motivation and choosing to ride simply because our friends expect us to be there. Second, most experiences are perceived as more interesting and enjoyable when shared with people we like. Mountain biking is no exception – there’s just more joy to riding a flowy trail with other people and then talking about it afterward. Last, riding with other people increases the opportunity for improvements in skills and mastery (see below). When we ride with people at a similar or higher skill level, we learn faster, which makes us feel better.

The Japanese use the term “forest bathing” to describe the physical and psychological benefits of time spent in nature. In fact, researchers have determined that spending time exercising in a natural environment (and even more so, under a green canopy) can result in lowered stress levels (including lowered blood pressure and cortisol levels), anxiety, and depression, and an increase in perceived wellbeing, motivation, and energy levels. Mountain biking has a distinct advantage, over many other forms of physical activity, of taking us to (often inspiring) natural environments, including places that we would never otherwise visit.

This is a big one. Our modern lives can be pretty mundane and repetitive. We crave excitement, diversity, and meaning, and being able to explore these needs just by getting on a bike is remarkable. Whilst there are plenty of adventure sports, few are as easily accessible as mountain biking; it’s just so viable to make our riding adventurous. Nevertheless, because we’re creatures of habit, it’s also easy to get repetitive in our riding: the same trails, the same, route, the same destination. My aim ongoing is to explore new trails, do some longer, more adventurous routes that are unfamiliar, and push my boundaries by actually traveling to some worthwhile MTB destinations.

Psychologists have spent a lot of time exploring the concepts of challenge and skills mastery. Humans place a lot of value in being able to explore new challenges and improve their skills around that challenge so that they can push themselves in new ways. Ideally, we want to stretch ourselves just beyond (about 5% over, in fact) our comfort zone (so that the challenge just outweighs our skill), which increases the likelihood of experiencing a phenomenon known as ‘flow’. Flow is a remarkable state, with lasting psychological benefits, in which we can experience a sense of complete immersion with our activity, a loss of time, and an intense feeling of satisfaction. Activities like mountain biking are perfect for encouraging a flow state.

So, once I’m able to ride again and have a new bike, my plan is to focus on maximising the psychological benefits of mountain biking, whilst reducing the physical risk and psychological stress. Although I’m going to miss pushing my limits, and the satisfaction of overcoming my fear by clearing a scary feature, sticking to the blue trails has the capacity to open up a whole new chapter of riding. With a bit of luck, I’ll be able to ride enjoyably into my 60s or even 70s.

If you’ve questioned why you ride after an accident or injury or are simply finding it more and more stressful as your skills progress, maybe it’s time to reevaluate your approach to riding. Gnar looks great, but flow can be a lot more satisfying.

It’s Landed! Could This Be Your Next Jacket?

To Strava or Not to Strava…

One Plus One Equals Twice The Fun

The First Step Toward a Women’s Red Bull...

How to Deal with Periods When Hiking

Great article – This also sums up how I feel as well. I love mountain biking, but my risk/reward ratio has also changed mostly since having a child. I now want longevity from my MTB’ing as this is my ‘me’ time. I do not enjoy sitting on the sidelines with injury ( I say that as I sit here with a big gash in my leg from a flat pedal presently on the sidelines!)
I used to be embarrassed walking down some more gnarly sections of trial, however as i get more ‘mature’ (pushing 40) I am now moving towards having the most fun on the edge of my comfort zone – still pushing it a bit here and there, without pretending to be Jack Moir.

This last 12 months or so I have been finding real joy in riding with a mate or two, talking sh*t and enjoying being out and about. Therein lies my joy in riding. Getting out of the house, being in nature, having some me time, getting the adrenalin fix.
To paraphrase Jonah Hill talking about his new hobbies, It is true also for mountain biking if you are not present you will get your ass kicked! See above (leg gash) thinking about work / family other issues while riding trails results in injury.
My goals for MTB
1. Be fully present and enjoy the experience / moment
2. Share the experience where possible with a mate/s of friends, people new to the sport.
3. Push yourself where possible (either uphill cardio, tech climbing, better cornering, jump progression) without going OTT
4. No matter the sport or activity she/he who is having the most fun is the winner. period. I find with surfing those sitting out the back waiting for the 1 big wave of the day is no where near as fun / rewarding as sitting inside and catching anything you can and practicing turns etc. Same with biking, the focus is not on the best equipment, the biggest baddest features, its about being present and making the most of what you are riding where you are riding. Shifting your mindset to this really will improve all rides!
As you get older and you have less time for riding the focus needs to be on enjoying the experience moreso than looking for the biggest features.

Hey Chris,
Thank you so much for the kind words and your honesty on this topic. We feel it is something that has struck a chord with many of our readers. We’re all different and we all want different things from life, and mountain biking. The main thing is that we are having fun and can continue to do so for many years to come. Enjoyment, progression, and longevity is key 🙂