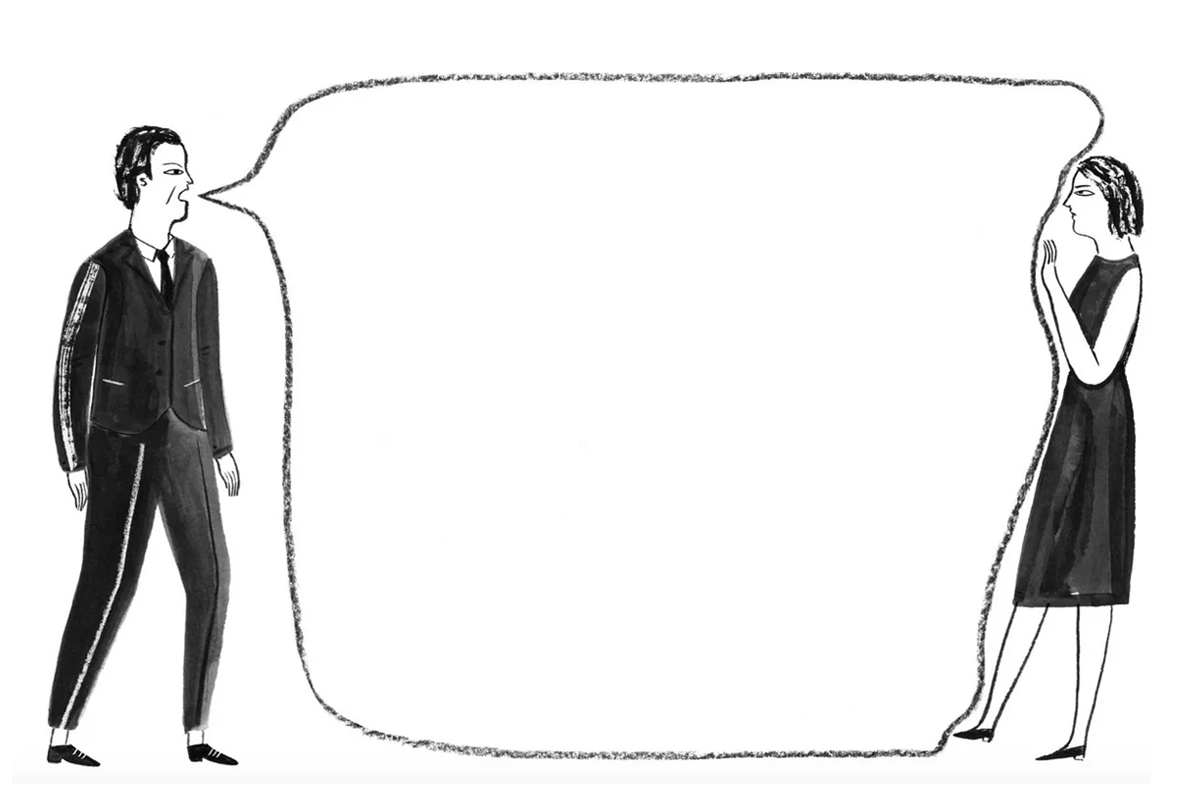 Home Featured Articles Mansplaining for Men: A Guide to STFU

Mansplaining: the seemingly embedded need by men to tell other people (usually women) about things that either their audience already knows about, or that simply aren’t of interest to them; whilst simultaneously being oblivious to the fact that (i) they’re doing it, and, or (ii) when to shut up.

I’ll start by acknowledging the irony: I’m a man, and I’m going to tell you about mansplaining. The irony gets more interesting though when we look at the fact that most men have no idea about the when, why, how, or frequency of their mansplaining, or why it’s so offensive. I’d also like to acknowledge that, as a man, I’m still learning how to get over my ‘need’ to mansplain, and I hope that I haven’t made too many assumptions here about what women want!

I started mountain biking all the way back in 1995. Sure, there were some pretty amazing top-end female MTB athletes back then like Missy Giove and Anne-Caroline Chausson, but the vibe was all testosterone. Over the last 25 years, the bikes have improved massively, but MTB is still pretty much exclusively male-oriented.

I’ll agree that (finally) the gender imbalance is starting to change (e.g., definitely more women on trails, more sponsorship of female athletes), but we’re nowhere near equal representation. A lot of this imbalance is likely the result of male ideas about the sport, and how these ideas dominate.

Men are often blind to their particular (and peculiar) obsessions. Whether we intend to or not, we can be highly competitive, manipulative, and quick to put others down. We also don’t seem to be able to help ourselves when it comes to ‘dick-measuring‘ contests with other men, jostling to encourage others to push themselves beyond their competence levels out of some inbuilt need to make ourselves look better within the tribe (Just Send It!).

We’re often blind to this need to compete and “prove ourselves”, but it’s a big driving factor in our self-esteem. Simply, we like being the centre of attention and being seen as competent. As such, we’ll often talk ourselves up and others down.

Competence versus Sexism in MTB

Contrary to pretty much every MTB-related image, video, and advertisement, competence on a mountain bike is not about how fast, how gnarly, or how big you go. These stereotypes are almost exclusively male: men want to see gnarly, and so that’s what we get shown. It doesn’t occur to us that we haven’t bothered to ask half of the population what they might want to watch.

Come on guys, step up and start mansplaining how Pauline Ferrand-Prévot, a gold medalist XC rider, needs to ride this feature. I’m sure it will go down well. Learn to STFU!
Photo: ©Bartek Woliñski

Anyone feel like mansplaining these champions? So why feel the need to mansplain every other female rider you meet? Learn to STFU!
Photo Copyright: Michal Cerveny Photography

Tracy Hannah winning the DH World Cup at Leogang in 2019. Anyone up for some mansplaining on how she could have been faster? Learn to STFU!
Photo: AMB Mag

Because we like the gnar, the only way male riders tend to respect female riders is when they can “shred” like a man. This is a no-win proposition because we also denigrate women when they appear too manly. Women who are too masculine are ‘butch’, but when they aren’t manly enough, they’re too ‘girly’.

Worse, because these stereotypes extend into competition, female mountain bikers are considered less valuable than their male counterparts. They don’t ride (usually) as fast, take as many risks, or hit the big air (the things men value), so they don’t get taken as seriously. As a result, there are fewer sponsored female MTB athletes, who get paid less and get less prize money and fewer media coverage.

This problem is obviously not exclusive to mountain biking – it’s disturbingly visible across pretty much every sport, but especially so in the sports that have been traditionally male-dominated.

When it comes to giving advice to fellow riders, suggestions, even unsolicited ones, aren’t usually a problem for men when they come from other male riders. When a male rider we see as more competent than us says “drop your heels” or “keep your head up”, we’re usually open to (or even grateful for) the advice. Even when we’re not open to it, it’s usually OK to reject advice without offending the advice giver. Unfortunately, this doesn’t cross over when it comes to men “advising” women for two main reasons: (i) because of the underlying assumption of inferiority; and (ii) because men often don’t like it when women don’t appreciate what they have to say.

Think about it: for pretty much forever, men have talked down to women, belittled their achievements, denied them access or participation, or controlled their options (often with verbal, emotional, or physical violence or threats of violence). Assumptions of inferiority are inherent in the way men interact with women, which means that even if your intention is admirable, the socio-cultural history and politics of suppression are almost impossible to remove.

On top of this, throughout their lives, most women have been punished for standing up for themselves around men, so they’ve either stopped doing it or get labelled as “bitchy” (by men) for simply asserting their opinions.

The long history of assumed incompetence that underpins the way men communicate with women, alongside the fact that it’s so difficult for men to stop offering unsolicited advice (and our thin skins), makes all-women riding groups all the more important. The opportunity for women to ride without mansplaining (i.e., testosterone displays, “well-intentioned” instruction, put-downs, or unconscious jostling for position), allows for the same sort of measured skills and confidence progression, acceptance, friendship building, and satisfaction that men often get when riding with other men.

Knowing WHEN and HOW to STFU

Dude, if you’re riding with a woman, or see or meet women on the trails, pretty much anything you say about mountain biking is probably going to be a mansplain. Think of your mansplain a bit like a dick pic: It doesn’t matter how impressive you think it is, it’s likely to come across as unwelcome and intrusive. It will not be seen as motivating, uplifting, useful, or instructive.

So, if you’re a man riding with women (or encountering women when riding), unless you’ve been specifically asked for instruction or feedback (and then only offer information about the specific thing that was asked), it’s probably a good idea to keep your mouth shut about the way you think she’s riding. Resist that urge to make a comment and focus on enjoying your ride instead. If you can’t help yourself, and your pearls of wisdom aren’t welcomed, don’t push it, or worse, take it personally – instead, apologise, and let her enjoy her ride without your unsolicited input.

And instead of automatically taking the lead and directing the ride, you could ask if she’d like to ride at the front, or which trails she’d like to ride and for how long. Or, even better, just hold back while she makes the ride decisions without you needing to assert control or give your ‘permission’. Hey, by watching the choices female riders make, observing the way they choose to ride, like their line choices and technique, you’ll probably learn something.

Know when to STFU.
Photo by Kristina Flour on Unsplash