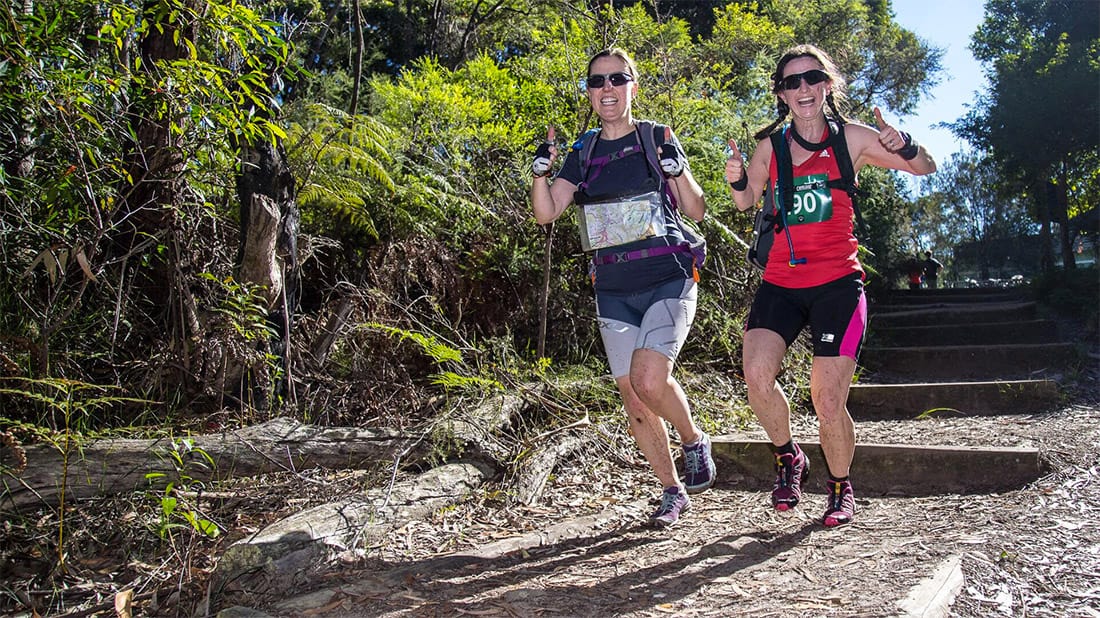 The teamwork aspect, the navigational challenges, the multiple disciplines, exploring beautiful wild places, the sense of achievement upon completion, the whole gamut.

Well, at least I did 10 years ago, when I did my last adventure race back in New Zealand, before getting side-tracked by new countries & pastimes. So, when someone posted in the Silent Revolution women’s mountain biking Facebook group a week before the Paddy Pallin Adventure Series event in the Royal National Park, asking for a teammate for the Classic race due to changes in circumstances, I jumped at the chance!

Sure, I hadn’t been for a trail run or sat in a kayak in the past year, but I’d been mountain biking pretty regularly all year, that’s got to count for something, right? The Paddy Pallin Adventure Series consists of 3 events – 27-28th May in the Royal National Park, 23rd September in the Blue Mountains, and an urban event in Sydney on 25th November. 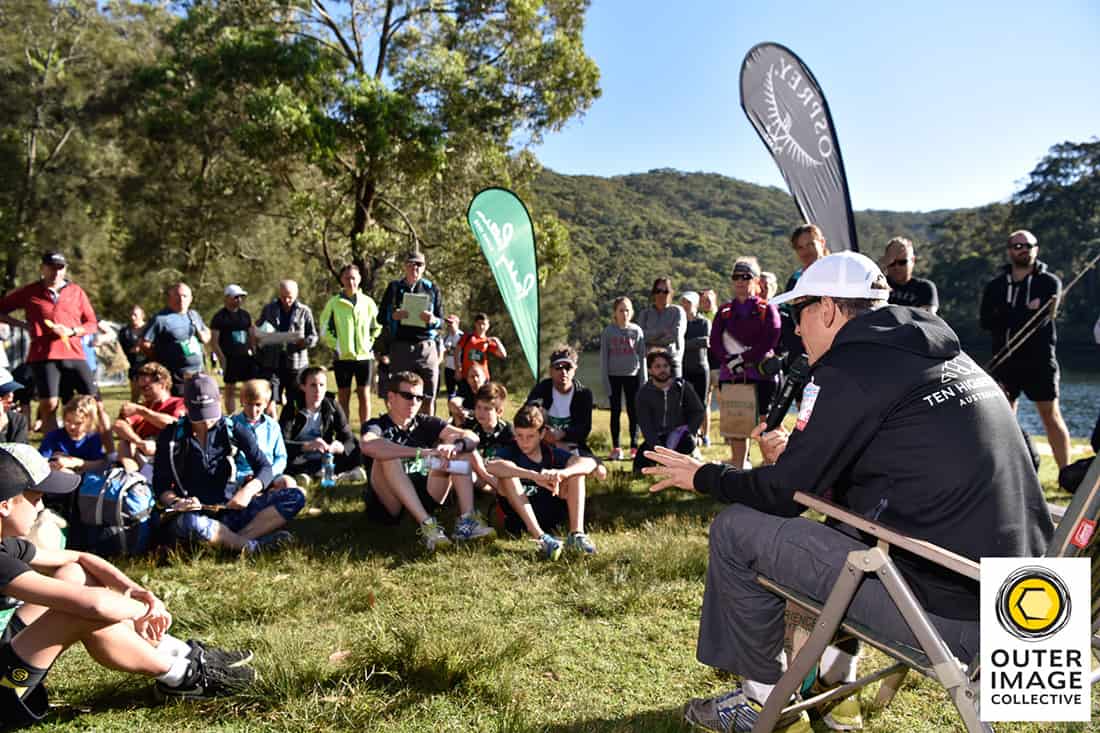 It’s a super fun race format consisting of mountain biking, running/trekking, and kayaking (all kayak gear is provided as part of the event), all completed together in teams of two. The course takes between 2-6 hours to complete, and there are Classic and Novice courses available, so it’s really achievable for all levels of ability. 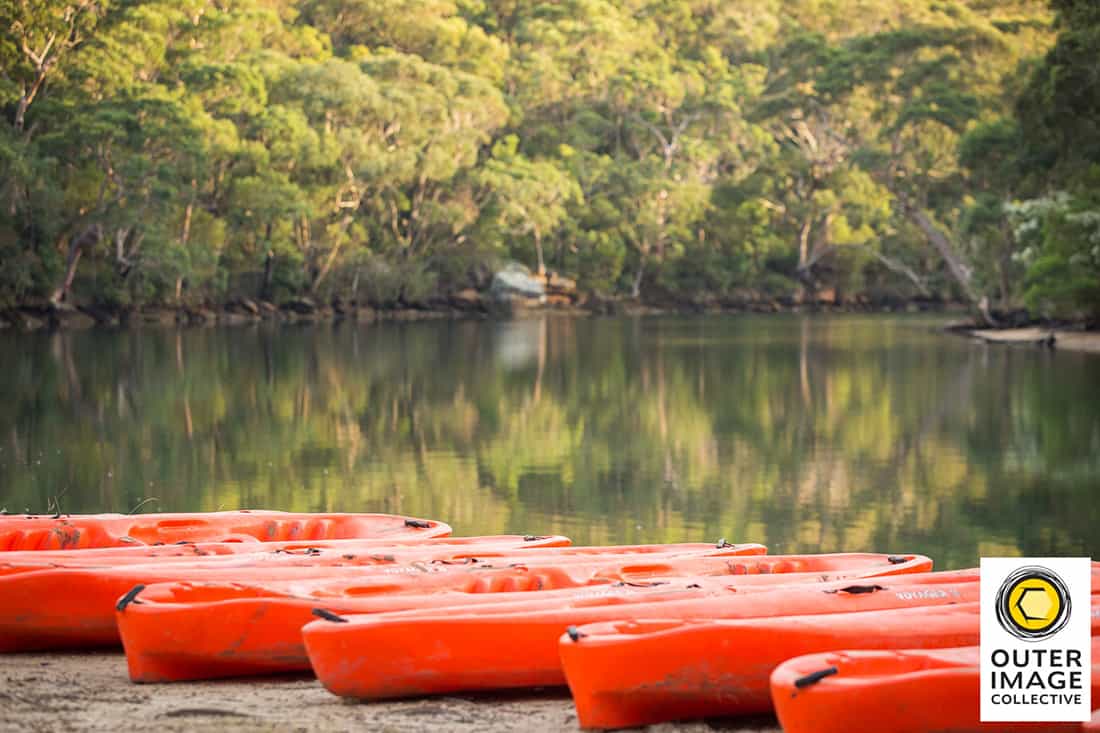 A beautiful morning for a race in the bush. Pic:©Outer Image Collective

Long before the crack of dawn on the 28th May, Race Day, I was starting to wish I had gotten in more training than a 4 km jog around the block to make sure my legs still worked a couple of days before. Pushing those unhelpful thoughts aside, we dropped our bikes off at the bike transition on what was shaping up to be a stunning, clear but pretty chilly morning.

We arrived at registration as they were opening, because the map and course are provided upon registration, and we wanted to make the most of our planning time to discuss route choices & strategies, highlight our planned routes, and cover our map with Contact book covering to waterproof it (which actually worked really well!).

We got our planning done with minimal stress and plenty of time for a warm-up jog and last snack & toilet break before the start. Not bad! 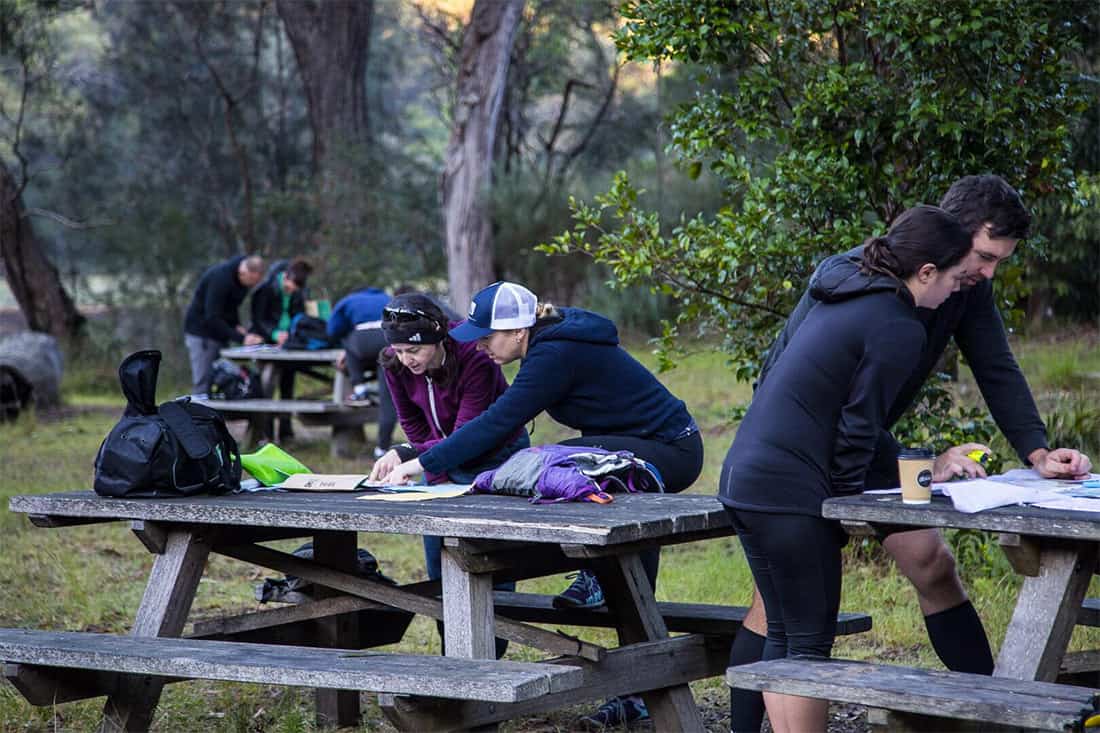 Planning and understanding the course map is crucial. Pic:©Ian Ganderton

Teamwork is a really important aspect of adventure racing, because over a variety of activities and a few hours everyone has their ups and downs and teams who are supportive of each other and make best use of everyone’s strengths have a much better chance of finishing the day with a smile on their faces.

Racing with someone you don’t know can therefore be a bit risky, but Bec and I were getting on like a house on fire and seemed to have a pretty similar attitude to racing, which makes life a bit easier, so we were off to a good start! 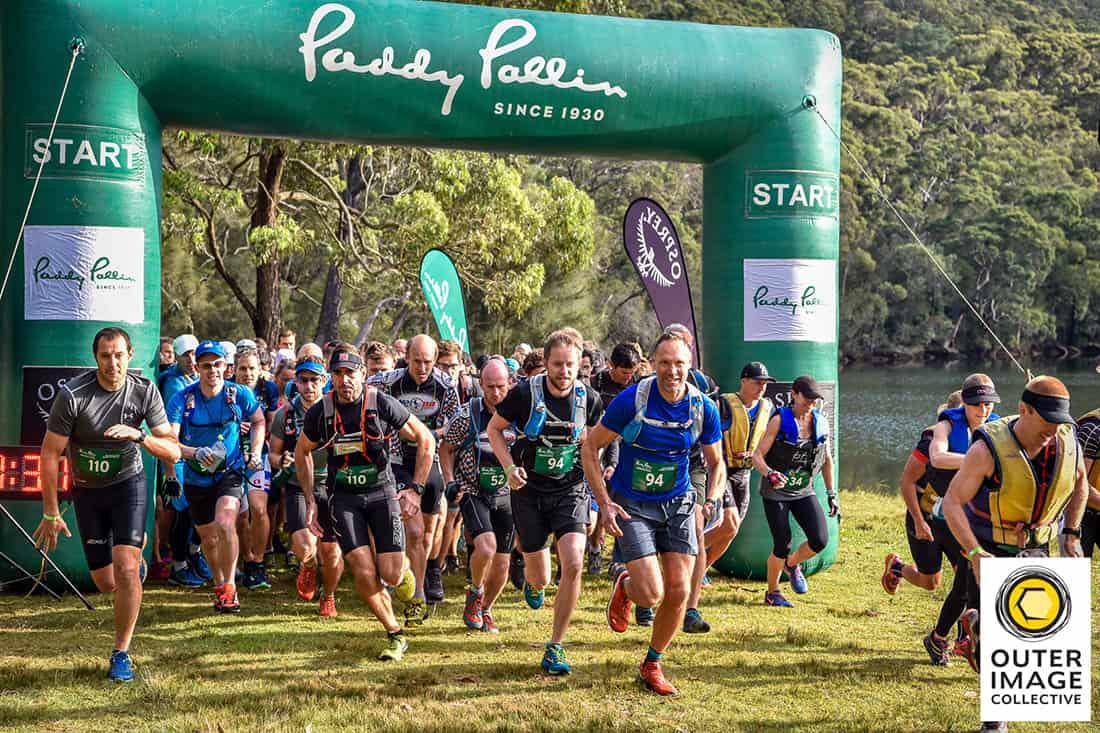 The mass start can get slightly chaotic!. Pic:©Outer Image Collective

The first leg of the race was a run/trek up through the walking trails from Audley up to Heathcote to where we left our bikes, with 4 checkpoints (and one optional extra) along the way.

After the mass start there was a bit of chaos as everyone jostled for position before being funneled into the walking trails, which are so narrow at some points passing slower teams isn’t possible.

The run section had some fairly brutal climbing, but the trails were beautiful, the birds were singing and the sun was shining so we just kept a consistent pace, navigated cleanly and popped out at Heathcote after just over an hour feeling pretty cheerful.

My husband Ian is a keen mountain biker, photographer and run-avoider, so he biked to meet us at convenient points on each leg to shout encouragement & snap pics. It was really fun having a mad supporter pop up and jolly us along when we least expected it! 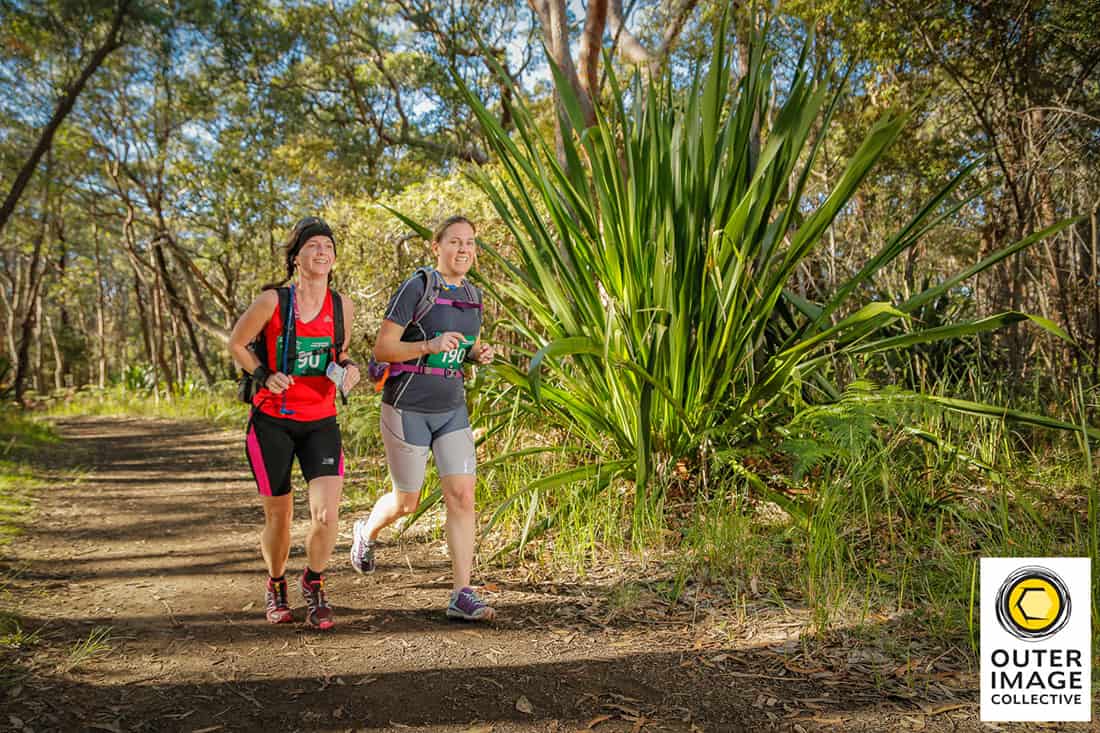 Nat and Bec in the run leg of the event, keeping the pace nice and consistent. Pic:©Outer Image Collective

Getting on our bikes, Bec & I were excited – this leg was both of our strongest & most enjoyable, and we’re both RNP locals so it was super fun to blast around our local trails together, encouraging each other up the climbs and chasing each other like children down the downs.

Emerging at the run transition around an hour later, we saw the transition checkpoint – oh no, I don’t remember seeing one of those at the first transition, I thought they were only at the checkpoints in between (even though this is explicitly called out in the pre-race notes, so fully my mistake and no fault of the organisers) – disaster!! 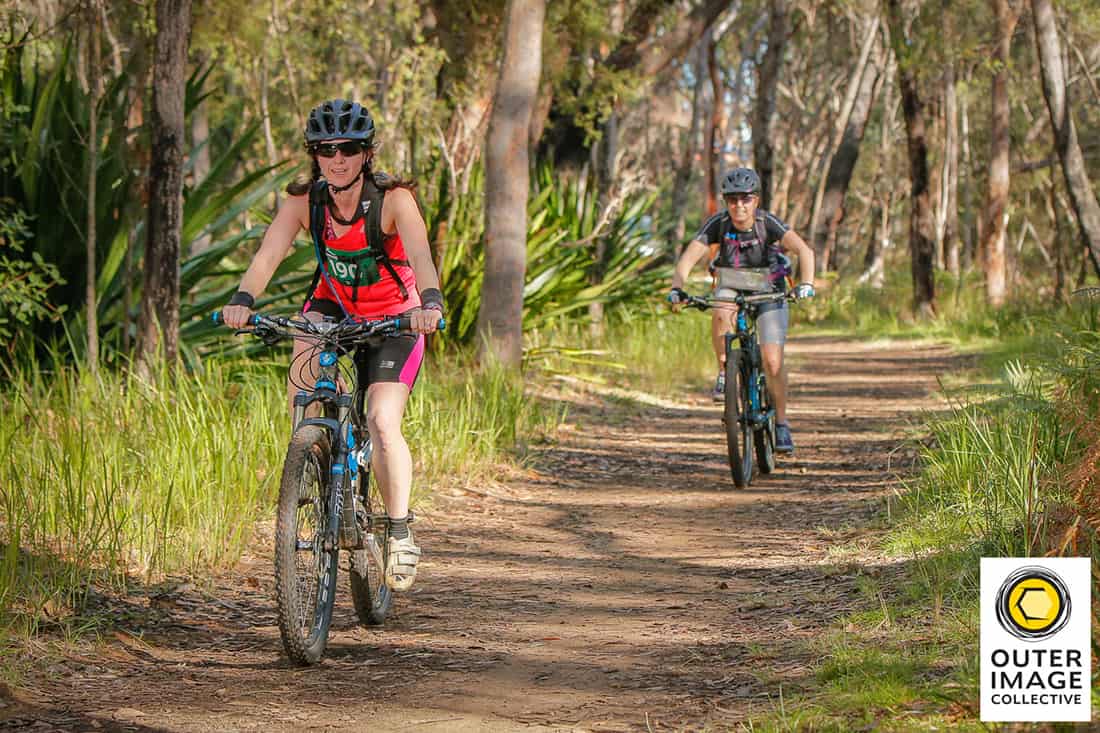 Excited to be on the bikes. Bring it on! Pic:©Outer Image Collective

Missing a checkpoint would mean a 30 minute penalty. A tough lesson to learn! But in adventure racing, you don’t have time to dwell on mistakes as the race goes on and demands that you focus on the task at hand, so we trotted down the hill to the kayak transition, the final stage!

Carrying our kayak down to the river was pretty challenging for two fairly small ladies, but we managed it and paddled out in a very zig-zag manner along the river, working our way not efficiently but determinedly between the two checkpoints. 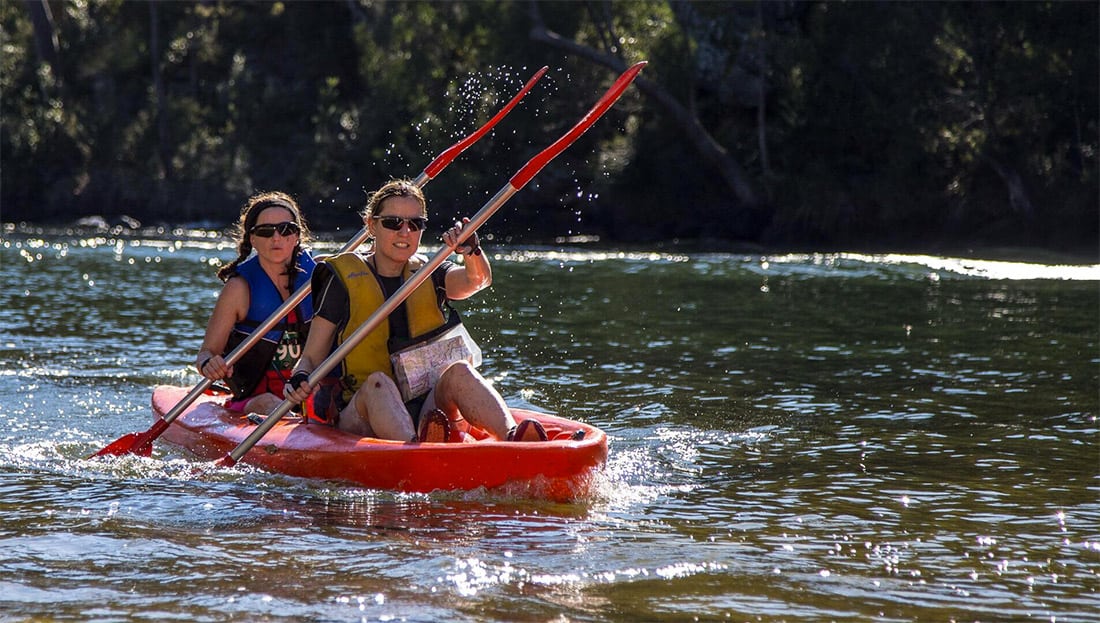 The last leg and zig zag ahead. Pic:©Ian Ganderton 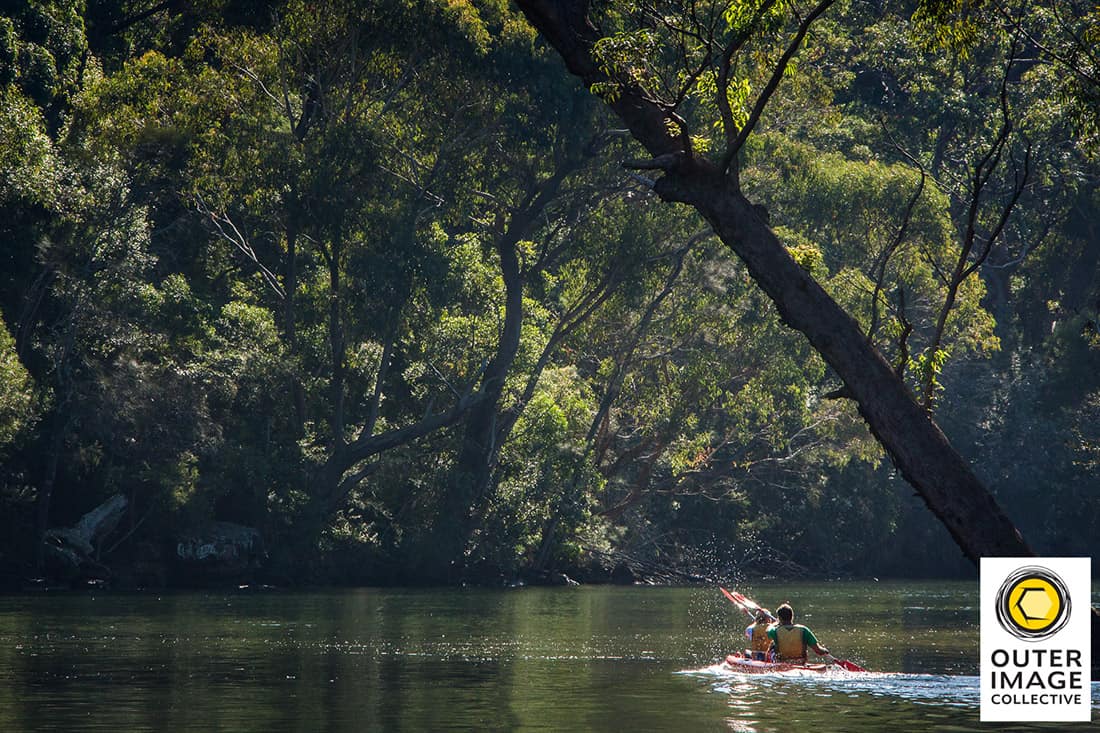 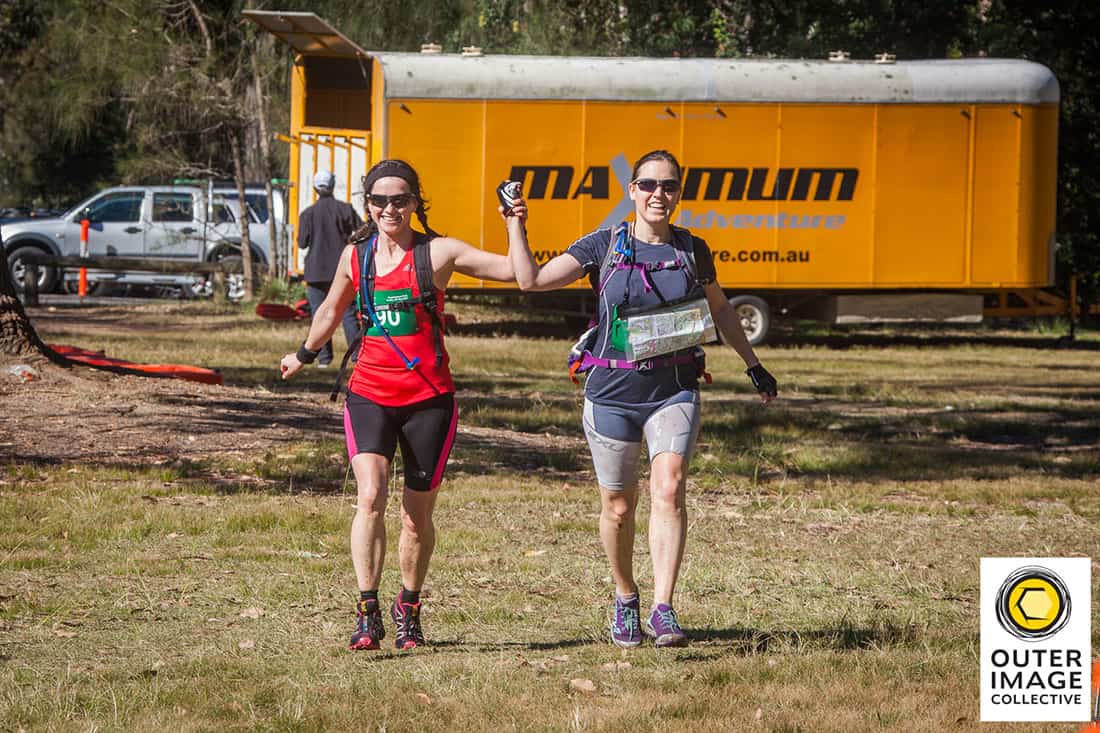 Crossing The Line Together

It was hard not to notice what a stunning day and location we were in, even after a couple of hours on the go and the scent of the post-race BBQ filling our nostrils! Crossing the finish line together with my new friend and teammate 2 hours and 36 mins later was a great feeling, and all the smiling faces of other competitors, as well as the camaraderie out there on the course, highlights the essence of adventure racing – the joy of teamwork & personal achievement in the wilderness.

I’ll definitely be back for the Blue Mountains race in September, and I’d highly recommend it for anyone who enjoys a bit of fresh air and a sweaty backpack!

Thanks Natalie for sharing this great write up with us! We hope this encourages more people to give adventure racing a go. We’ll be keeping an eye on Natalie and her future adventures.

If you took part in the race and want to see the pictures that Outer Image Collective took of you, then just click here to see the full gallery.

A Kiwi who (like most other kiwis) now lives in Sydney. I caught a love of the outdoors (also like most other kiwis) from a young age, and over the years have thrown myself with varying degrees of enthusiasm into sports like orienteering, trail running, adventure racing, triathlons and more recently mountain biking. You’ll find me most weekends out and about on the local NSW MTB trails, mostly squawking excitedly about Australian wildlife.

One Plus One Equals Twice The Fun

How The Peaks Of The Kosciuszko Main Range...

YOGA Special: Doing It In The Office

Let AllTrails Help You Get Back Into Nature!