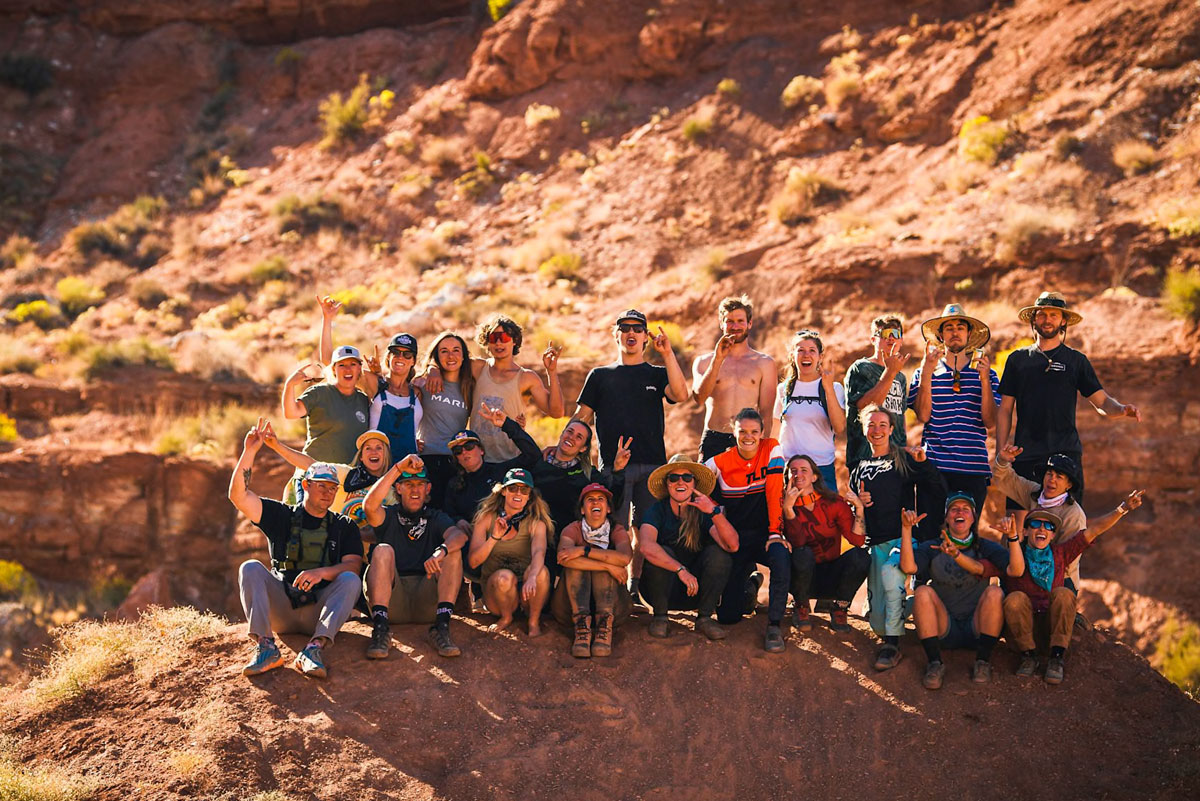 When the sun sets behind the Southern Utah red rock canyons of Virgin, Utah, all activity at Red Bull Formation comes to a close. It’s always a time for reflection among the eight athletes taking part and their respective digging crews. One thing has become clear during these first few days on site: a forced gap year had done nothing to dampen the spirits of the riders, who had all gathered to author a new era in the world of women’s freeride mountain biking.

Eight of the best female freeride athletes from across the world –Hannah Bergemann, Camila Nogueira, Casey Brown, Chelsea Kimball, Jess Blewitt, Sam Soriano, Vaea Verbeeck, and Vinny Armstrong – have been on site of the mountainside chosen by organisers for the freedride contest in Virgin since May 23. They’ve been chomping at the bit to advance on the progress they’d made in 2019 at the inaugural event.

Riders attend an athlete meeting prior to the course walkthrough
Photo credit: © RE WIKSTROM

The competitors have once again been aided by support teams that included some of the most accomplished action sports athletes in the world, with the likes of Michelle Parker, Brooklyn Bell, Krystin Norman, Lexi Dupont, Jaxson Riddle and Carson Storch bringing an added layer of support and mentorship to the process.

“The course this year is quite a bit bigger, so we have a lot more options to work with,” Hannah Bergemann said after setting eyes on the course. “And it’s also quite a bit longer, which will make runs more difficult but will also allow us to be more creative. With that added room to work with, I’m planning on building a bigger line and having more features in it this year, which I’m excited about.”

With picture-perfect conditions from dawn to dusk, the excitement was at a fever pitch from the moment competitors stepped on to the course. Once group planning and support sessions wrapped, competitors and their support crews went on a site walk that was punctuated with giddy laughter and exuberant gazes downhill as each rider envisioned how they wanted to attack the course. It’s already clear that this year’s event is going to be special.

“Everyone has a bit more of an idea of what they’re getting into this time around,” said Bergemann after completing the walkthrough. “The first year, we weren’t sure what we’re getting into. It was our first time building full lines out here, so we were careful not to bite off more than we could chew. This year, everyone’s keen to take it a bit further.”

Time to get digging

The last buckets of red dirt have been shovelled, watered and packed down as riders and dig teams at Red Bull Formation draw three days of course excavation to a close. With one day for the eight world-class freeriders to rest before getting back on course, one thing is certain: history will be made at this year’s Red Bull Formation.

“I think my initial impression looking at the course this year, was that I’m just blown away by how far the ladies have improved in such a short time span,” says Michelle Parker, who is working as a digger and support crew this year. “The stuff we’re building right now is way bigger than the first year – it’s incredible to see the progression so far.”

For Parker, the prevailing theme through the first days of digging can be summarised in one word: teamwork. With larger support crews this time around and an overarching attitude of ‘many hands make light work’, the riders have been able to shape lines straight out of their wildest dreams.

This year there are no limits on the lines athletes can build.
Photo credit: ©Catherine Aeppel / Red Bull Content Pool

And one rider in particular – Utah’s own Chelsea Kimball – has really allowed her imagination to run wild.“Chelsea is building a brand-new feature, and I was immediately drawn to that,” says Parker who spent much of her first days on-course digging for Kimball. “Out here, in this part of the country, we are usually resurrecting a lot of old lines. But Chelsea saw something she was inspired by at all these sites and found an area that had never been built on before. To create something new somewhere that’s never been built on? That’s epic.”

“This event is all about teamwork,” says Parker.
Photo credit: ©Catherine Aeppel

The site for this year’s Red Bull Formation is a playground for imagination.
Photo Credit: ©R E Wikstrom

Kimball’s feature is a huge stepdown located mid-mountain on the contest course, a true ‘you have to see it to believe it’ freeride feature immense in both scale and technicality. And, for good measure, after spending multiple days building this all-new stepdown feature, the dig teams decided to add a canyon gap after the runout.

“We’ve basically moved the entire mountain to build these features,” said Parker. “But we’re excited for them. I think, at first, Chelsea was doubting it could happen. But now that we’re getting closer, she can see it forming. And that has inspired me to dig harder.”

Take Flight with the Superhero of Trail Runners

The Most Innovative Knee pad from 7iDP