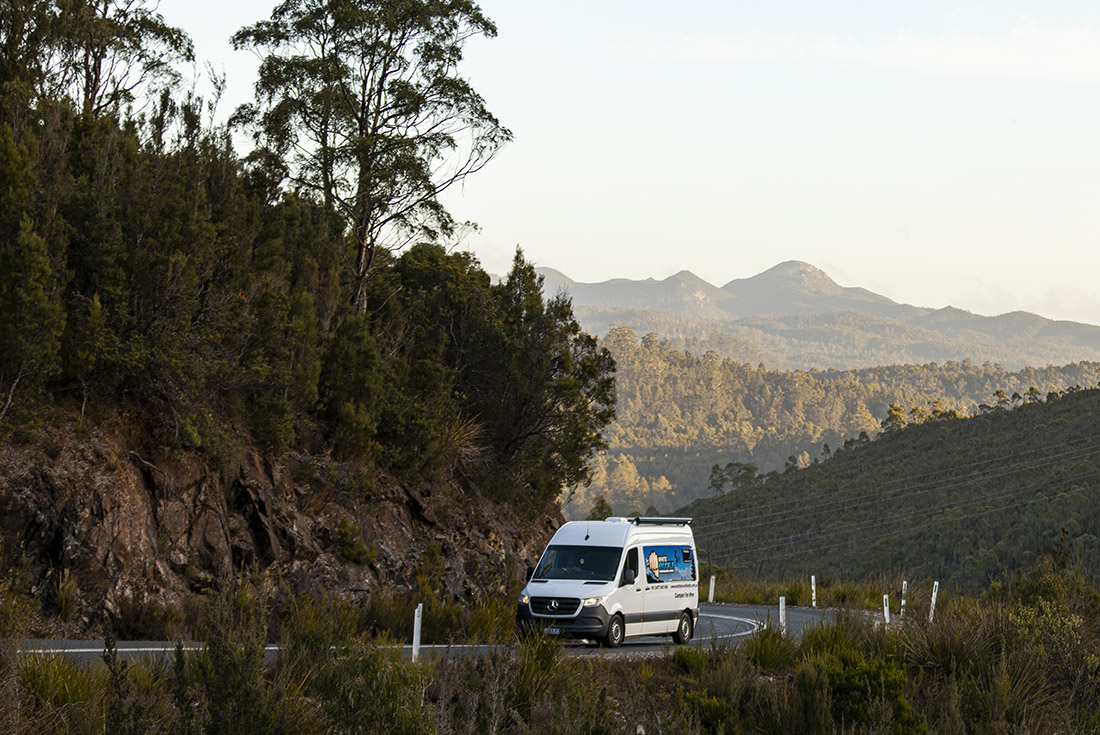 The very mention of a road trip sparks a sense of adventure in all of us. That sense of excitement that comes with knowing there’s no more work for a while, no more rush hour traffic to deal with, just good company and that open road. The excitement of what’s to come, discovering little gems off the beaten track, and meeting like-minded people along the way, but most of all, the anticipation of riding that lay ahead.

The target destination was Tasmania’s wild West Coast. The terrain is the ultimate MTB riders paradise with rolling mountains, valleys of rainforests, and about 2 meters of rain every year. We had a few riding locations in mind scattered over the West Coast, so we hired a van, which is the perfect tool for this trip. Being able to drive between trails and camp where you want is the ideal option for any MTB road trip.

Setting off from Devonport, within an hour of driving the landscape has started to change dramatically and the vegetation has turned to rainforest, you soon realise how small you are in this part of the world, you start dreaming of trails on every hill you pass, the stoke was building. The first riding target, Mt Donaldson, is located just north of Corinna and the Pieman River. The roads from Waratah through to our campsite delivered us epic views during golden hour.

We arrived at the camp on the banks of the Savage River, just at sunset. We were set up in a couple of minutes, beers in hand and BBQ cranked. A few stories were enjoyed around the fire, throwing some banter at each other and getting keen for the early start the next morning. 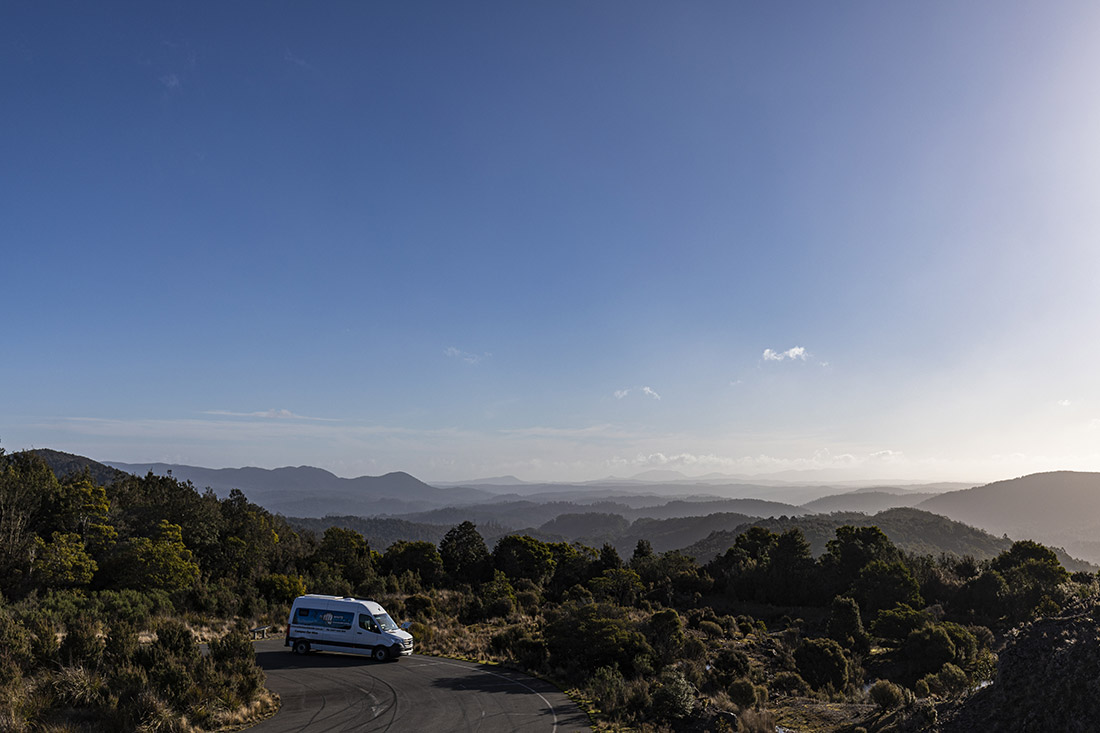 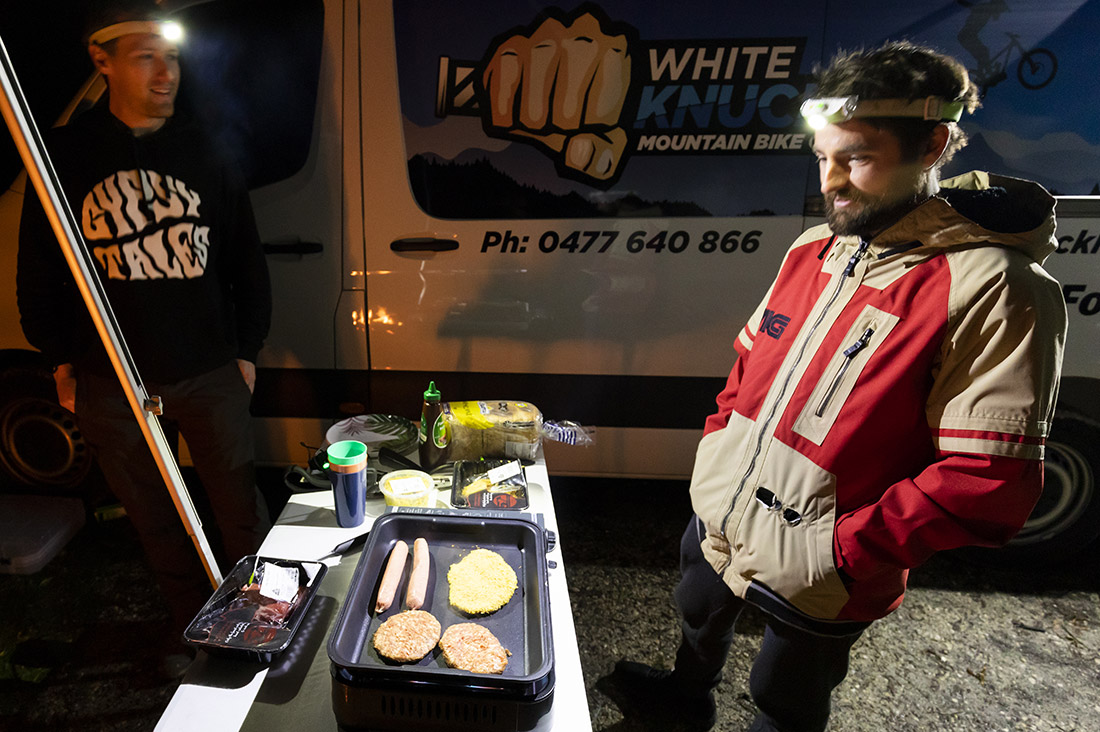 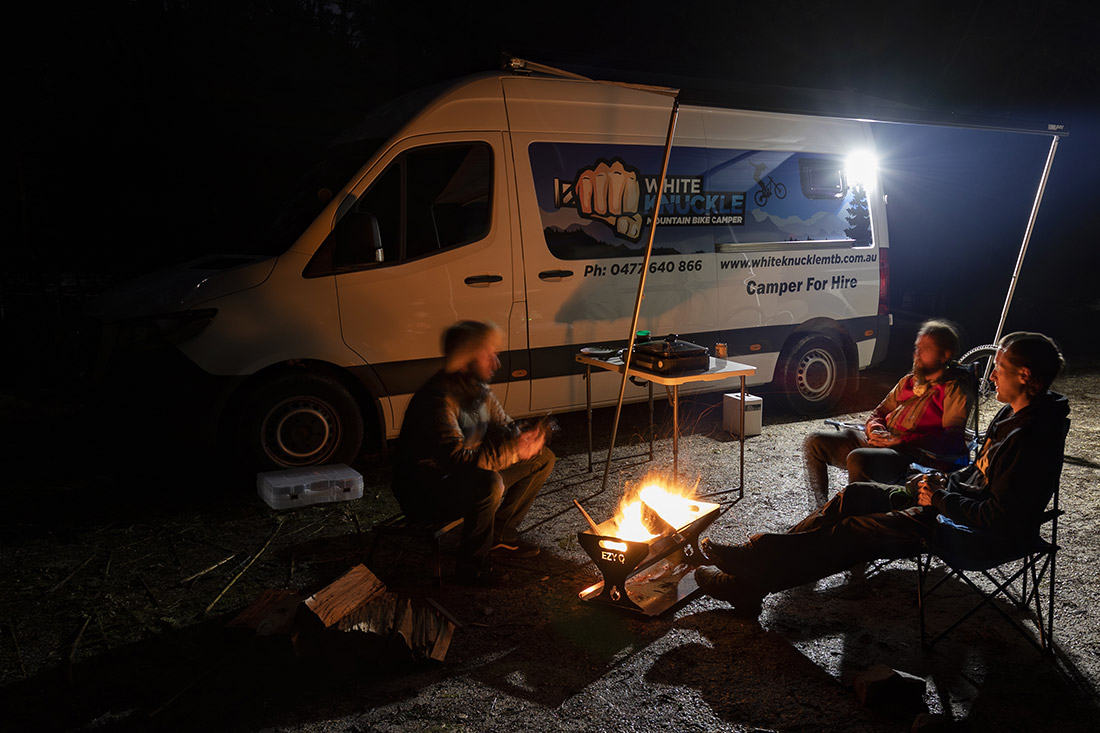 Lights were on and we were riding before dawn, to get up above the tree canopy on Mt Donaldson for sunrise. Mt Donaldson has an old walking track to the summit which gives 360 degree views of the coast on a clear day. Climbing about 400m in elevation from camp we were treated with some epic views over the Pieman River, in between complete cloud coverage!

The weather on the West Coast is unpredictable at the best of times, as we found out on Mt Donaldson, but when the clouds part, it is more than worth it.

We hit the Summit just after dawn, after a lot of hike-a-bike. The view was less than desired but we quickly turned around to enjoy the descent, which is a classic old school single track, not a whole lot of flow here! With big rocks, ruts, and lots of button grass ready to catch you at every turn, there was no relaxing on this descent to enjoy the views once below the clouds. Dropping into the rainforest the trail opens up and the speed increases, but you got to keep an eye on the roots just waiting to pull the front wheel out from under you.

With big rocks, ruts, and lots of button grass ready to catch you at every turn, there was no relaxing on this descent to enjoy the views once below the clouds.

The whole descent takes about 15 minutes, which makes the climb worthwhile, maybe an e-bike would be the better bike for this trail to really give you the chance to take in the scenery!

The bikes were loaded into the van and we hit the road. The first stop was Corinna, we refueled with caffeine and warmed up by the fire in the Tavern. Corinna is on the banks of the Pieman River and was established as a mining town in the 1800s after gold was discovered nearby.

There is no bridge over the Pieman River, but the Fatman Barge crosses the river and can take up to 2 vehicles at a time. Crossing the Pieman gave us a shortcut to Zeehan, our next riding destination.

The majority of the towns on the West Coast were founded due to mining and Zeehan is no exception. The mining heritage can be seen in the main street with the number of original heritage buildings and steam trains from the early 1900s. The bikes were unloaded in Zeehan and we headed for the 14km Oonah Hill Trail which takes in the Spray Tunnel and an epic green descent which finishes in Zeehan. 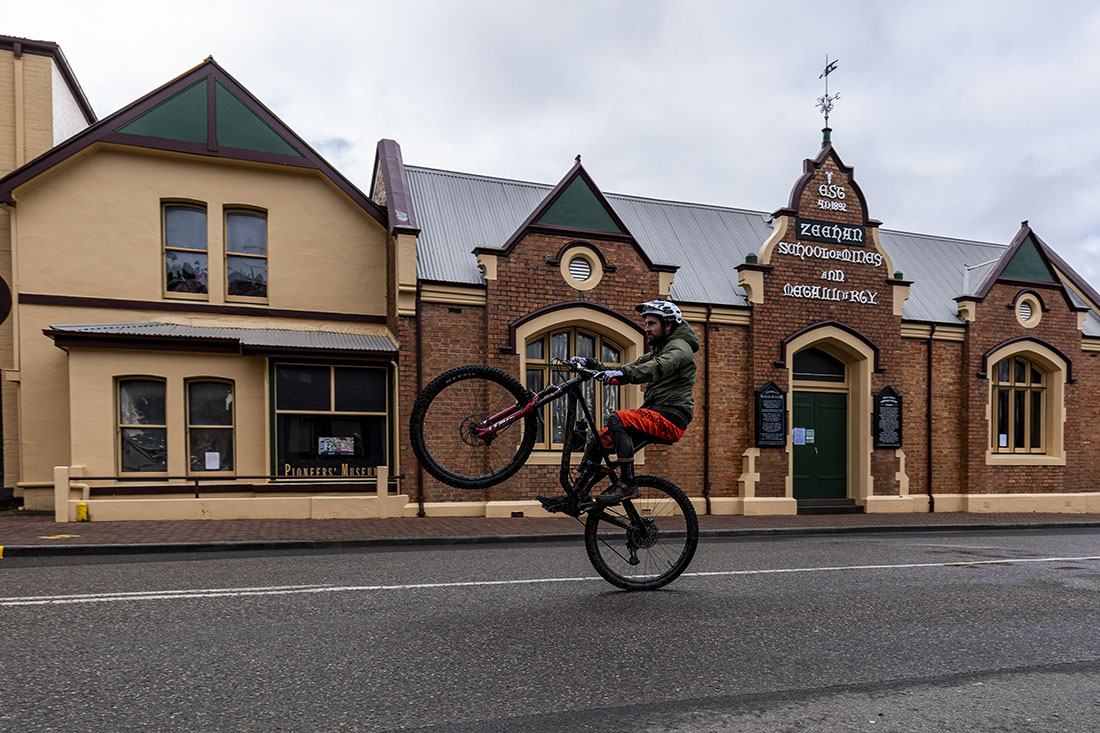 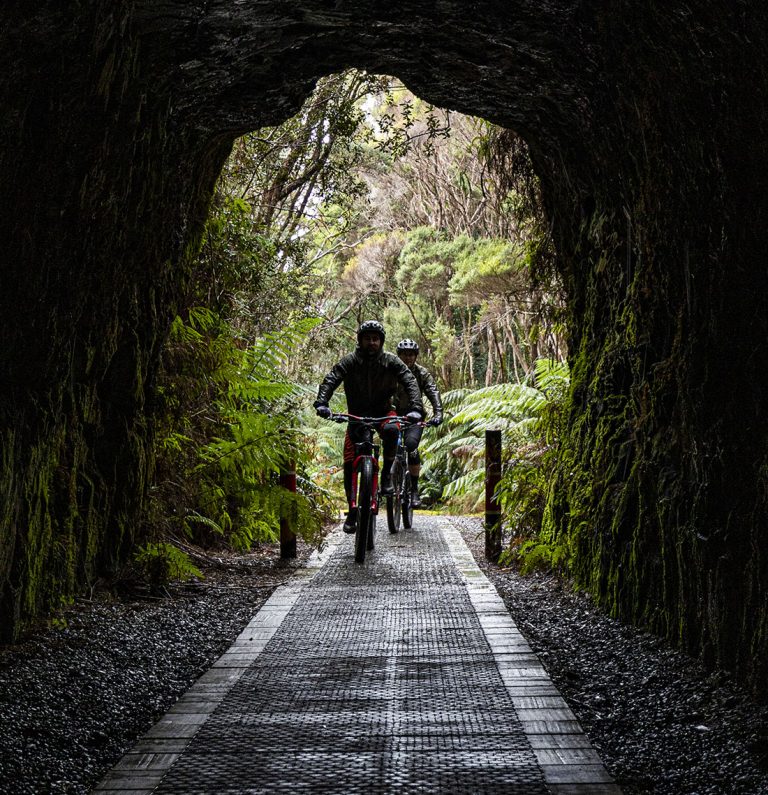 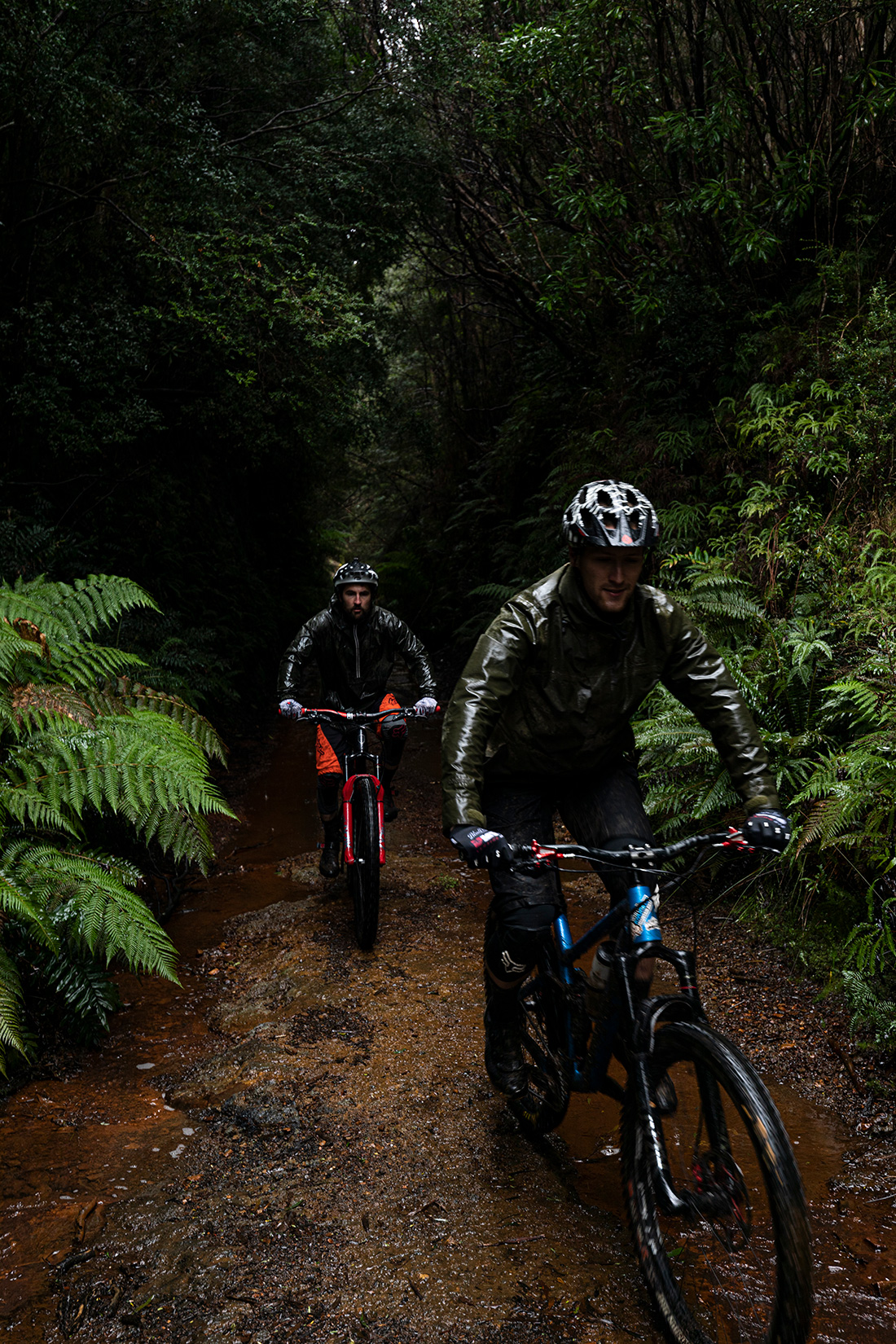 The descent from the Summit is a green trail but don’t let the green rating deter you. It is one of the best flow trails in Tasmania and puts a smile on even the most advanced riders.

The trail climbs gradually into the hills surrounding Zeehan on an old tram line. After a short pedal, we reached the Spray Tunnel – a 100m long tunnel through the hill. Not often you get to ride through a tunnel let alone one with so much history.

The trail then traverses through the hills to reach the start of the Oonah Hill Climb. The Oonah Hill trail was opened in 2019. We didn’t know what to expect. Little did we know we were in for a treat, the clouds parted and we had 360-degree views of some of the most spectacular mountain ranges and at the very summit of the climb you look directly down the valley back into the Zeehan township.

The descent from the Summit is a green trail but don’t let the green rating deter you. It is one of the best flow trails in Tasmania (that’s saying a lot) and puts a smile on even the most advanced riders. The trail has plenty of turns and some massive berms, which means you can get as much speed as you can handle, just watch for trees near the end of the trail as one of us got a bit too friendly with one.

It was time to leave Zeehan and set up camp for the night. We knew the weather was rolling in and it wasn’t going to be friendly, so we drove back up the coast to Tullah and found an absolute gem of a spot to pull up for the night at Lake Mackintosh. From where we set up we looked straight across the lake at a huge mountain that set an epic backdrop for another night of beers, food, banter, and plenty of tall tails about each other’s riding. 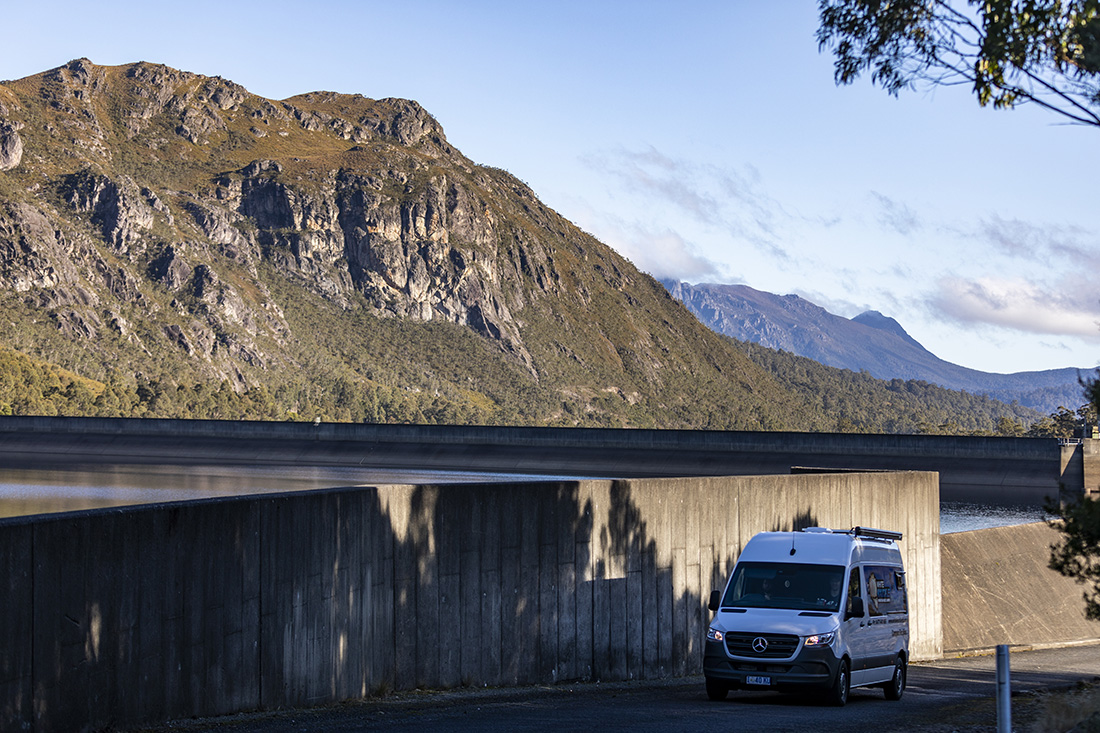 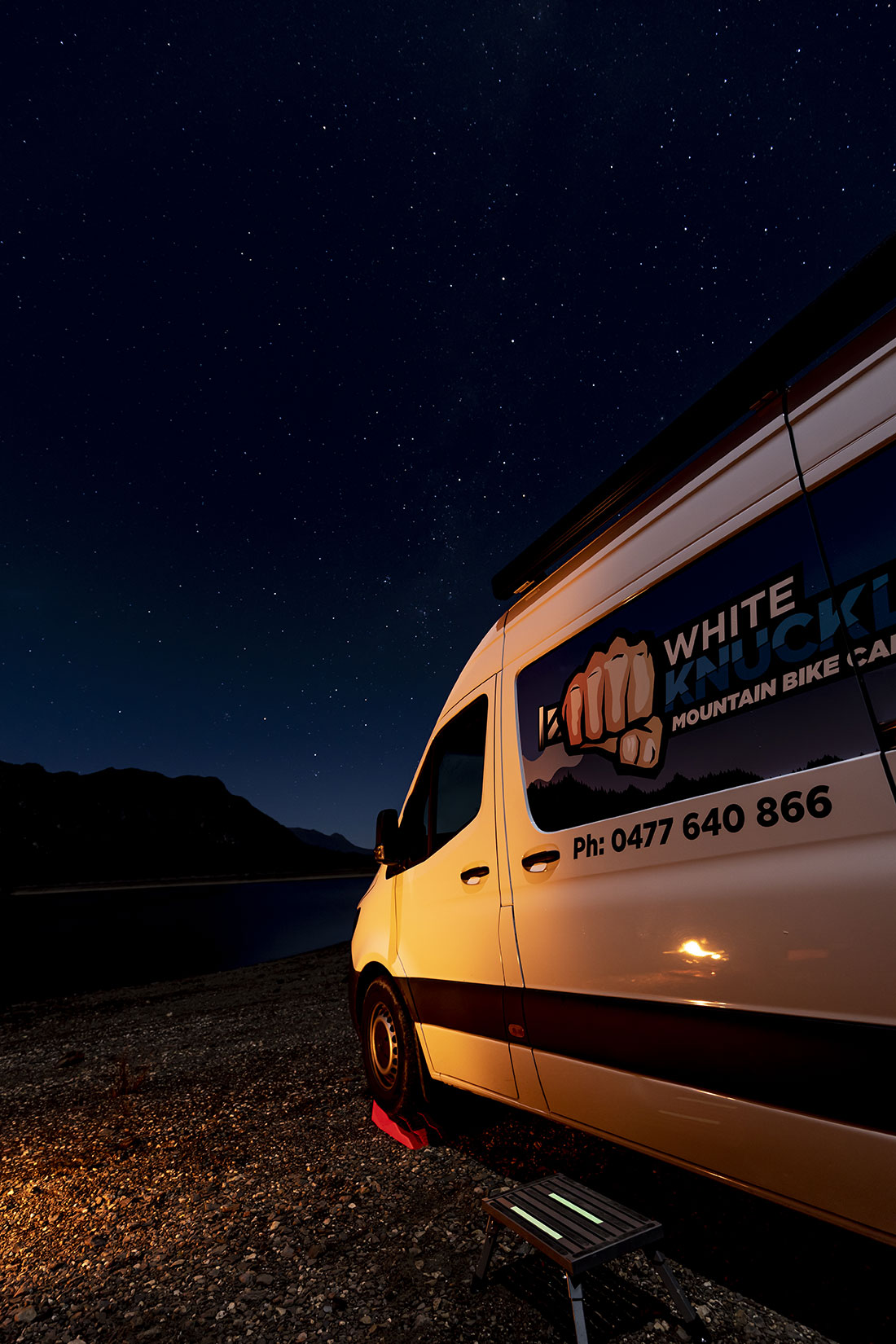 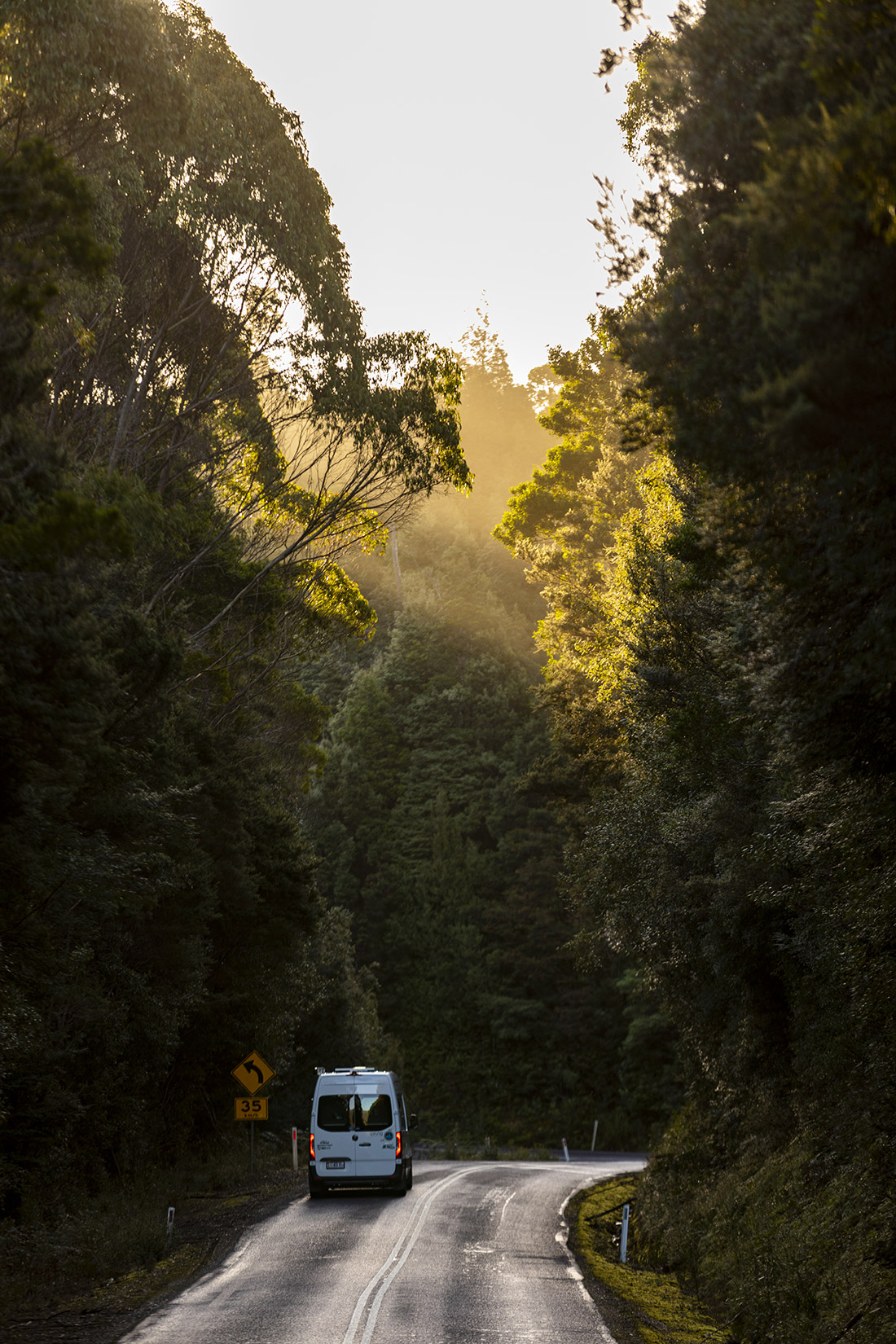 The final day of the trip greeted us with clear skies and a pretty epic sunrise, however, heavy rain was forecast for the morning. Pretty tired and sore from the previous days riding we decided to head into the Tullah Lodge for a Big Breakfast and Coffee before hitting the road back to Devonport. We decided to save the planned trails for the next trip and keep dry this time.

With plenty of places left to explore on the West Coast, we will definitely be back – hopefully with clear skies next time!

One of Sydney’s Most Popular Trail Needs Some Love

Could Outdoor Adventure be a Treatment for Autism?