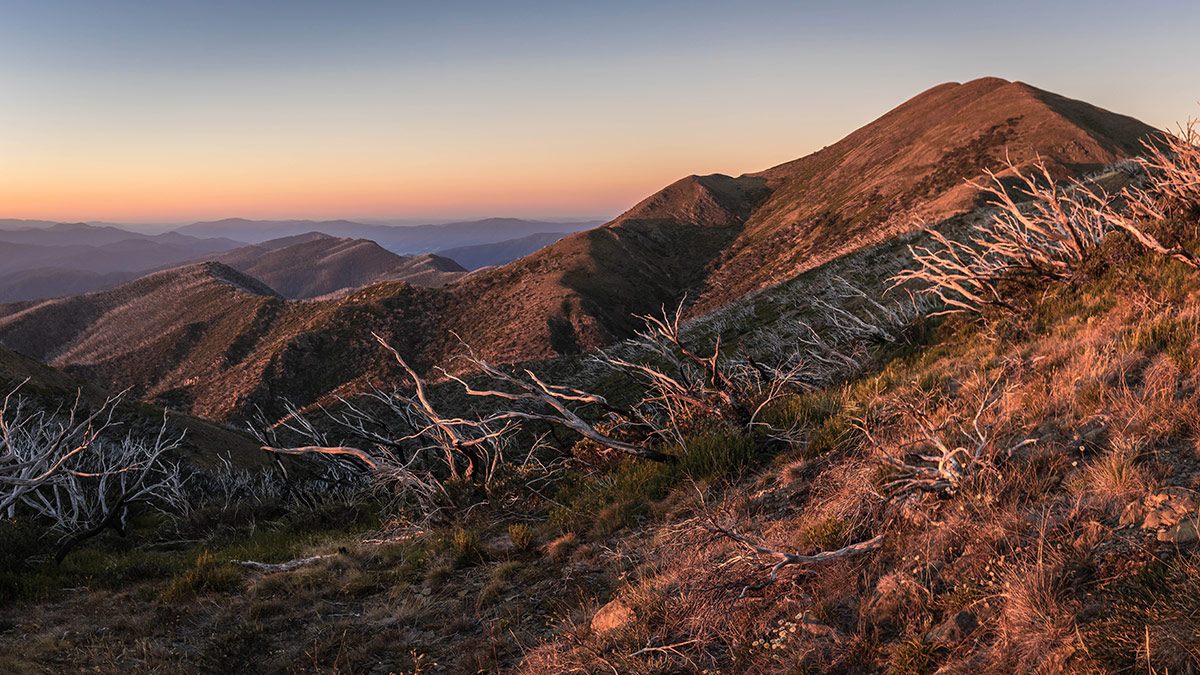 Getting to the Top Is Worth it

Its peak doesn’t rise to where the air is so thin your lungs gasp at frozen air, and the ice doesn’t freeze so hard that you can barely sink an axe into it. It doesn’t have sheer slopes that dramatically vanish into oblivion, and you don’t need $100k to get to the summit. But to me, it represents something immeasurable, enigmatic and magical.

Before Feathertop, my experience with mountains was limited to desktop wallpapers and motivational posters in the workplace about courage and teamwork.  And then I met Bella. From our first conversation, she mentioned a place called Bright in eastern Victoria and a mountain that I had never heard of.

The trail to Federation Hut from the Razorback.

Her enthusiasm was infectious and piqued my interest immediately so within a few weeks, we had committed to going.  I had no tent, no pack, and boots I’d bought from a discount website for $50. I walked into a camping supply store in the city, bought everything I thought I needed, and a few days later, we jumped into the car and started the 4-hour drive to Bright.

Bright was grey, cold, crisp, and a thin fog lingered in the air.  I immediately fell deeply in love. Since then, this sleepy little town has been a place for maintenance, repair and growth; often solitary, insular and profoundly healing. Driving through its iconic corridor of poplars always and immediately fills me with an especially potent energy, allowing me to stop, breathe and rebuild my mercurial, unquiet mind – something for which I am grateful every single time.

There are a number of routes to the summit, all of which offer their own challenges and rewards. The Bungalow spur is probably the most popular, especially during the winter months when the Razorback is covered in snow. This was the path we elected to take.  It winds its way up through a gorgeous forest of Mountain Ash, gradually replaced by snow gums and alpine shrubs.

We did everything wrong.  We began too late and dropped our packs at the old hut site rather than walking to Federation Hut.  I hadn’t unpacked my brand new tent and had no clue how to set it up, but I didn’t care.  That all seemed so irrelevant.

We spent the night sipping whisky out of a water bottle and engaging in uniquely personal and honest conversation under a night sky that I realised I so seldom see.  There is an old inuit proverb that reads “Perhaps they aren’t stars, but openings in heaven where the love of our lost ones pours through and shines down upon us to let us know they’re happy”. In the city, where the sad, dim light of a handful of stars struggles desperately to reach us, this is a sobering thought. But out there the sentiment is overwhelming.

The night sky above the Alpine National Park.

I hadn’t seen snow for quite some time, so to finally get to Federation hut and be greeted by a pristine white carpet crunching under my boots was surreal.  South of the summit pyramid at the start of the Razorback there is a hill with a small cairn and a plaque in remembrance of a skier who lost her life on the mountain.  It was our intention to camp there for the evening, and usually, there is a clear path to get there from the hut but it was hidden under 2 metres of snow. 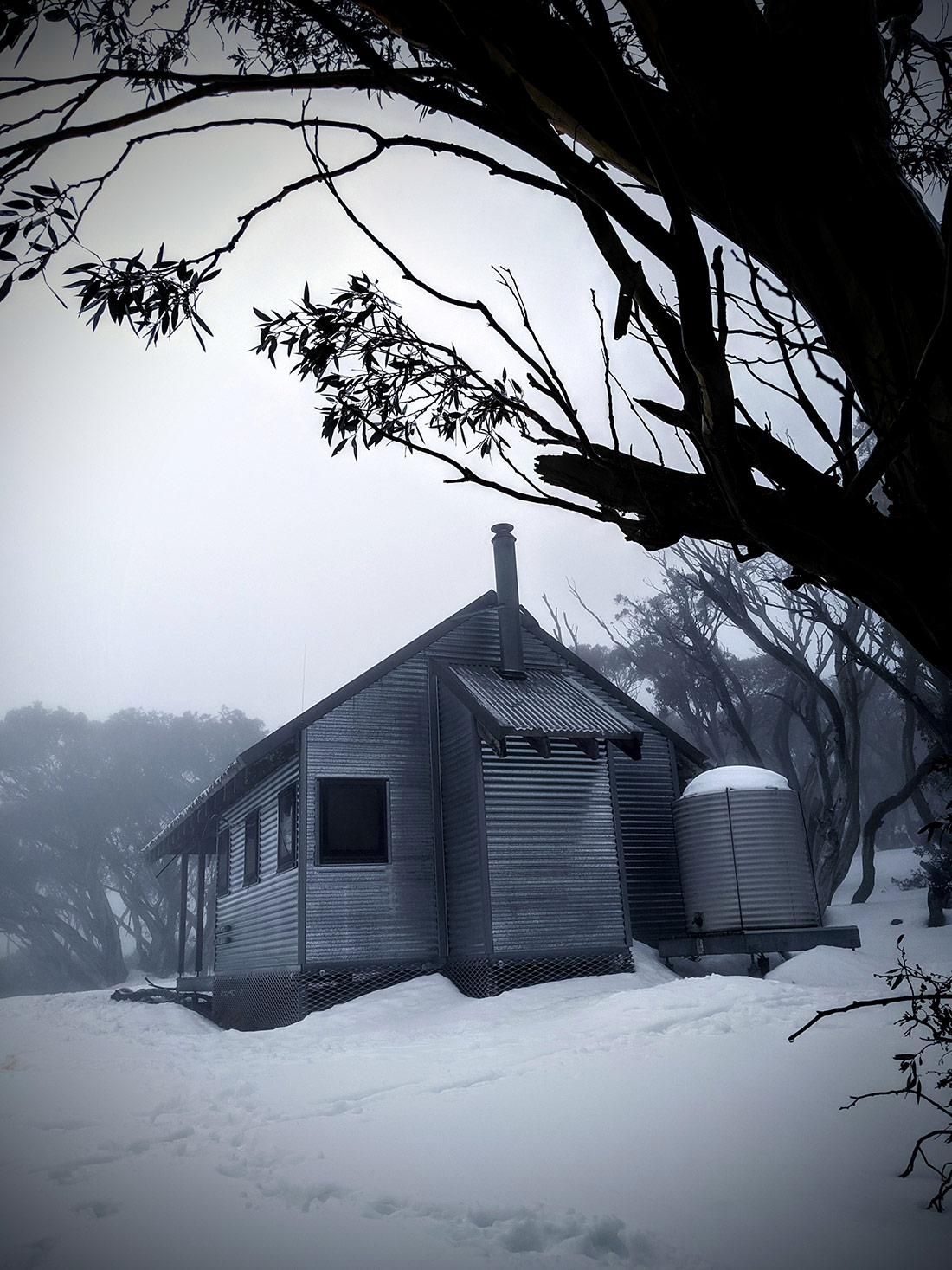 As we began walking, it became painfully clear how difficult it is breaking trail in such deep snow.  Hilarious to me now is the fact that we were less than 10 meters from the path. With every step, I sank waist-deep into the snow and had to drag myself and my unnecessarily heavy pack out which was exhausting but I was so distracted that I didn’t seem to care.  My mind was quiet and all that seemed to matter was getting to the campsite. That night for the first time in a long time I fell into a deep, uninterrupted sleep.

We attempted to summit but being inexperienced and having a healthy fear of the sheet of snow resting precariously on Feathertop’s north-western slope, we elected to sit and appreciate the sunshine instead.  A few minutes passed, and seemingly out of the ether, an older couple wearing spikes, carrying axes and roped together, appeared over the crest of Feathertop’s false summit.

It’s quite fitting that they would wander into my life on this particular mountain; meeting Bruce and Gill was a milestone for me.  I’ve since followed them into the depths of Australia’s wilderness and learned more about hiking, climbing, tracking, weather and myself than I could ever possibly hope from a book.

It took me two years to finally find the courage to step foot on that sheet of snow but after spending time in the Himalayas and having reached Feathertops summit in far less challenging conditions so many times, it seemed like the easiest thing in the world.  The path to the summit is a fun short hike, and while the cornices that form during winter demand respect, the summit is as inviting as it is rewarding. From that vantage point, the view is breathtaking.

Looking out over the crumpled landscape that seems to stretch to oblivion is truly something.  With Buffalo to the west, Bogong to the north, and the Razorback snaking its way south to Hotham, time seems to stop.  I’m imbued with a sense of purpose and reason that what I’m paid to produce, or convinced to consume. There is a fleeting stillness that exists nowhere else.

Above: Mt Buffalo from the summit of Feathertop

It’s important to never lose sight that there is a life down there that we can not and should not run from but it’s comforting to know that there are places in this world where we can, to echo the sentiment of Francis Bacon’s famous quote, burn old logs, drink old wine, read old books, and keep old friends.  Places where we can share wonderful moments with wonderful people which serve as a reminder of the value of our shared experience, no matter how much distance or time separates us.

If you’ve thought about it.  If you have the means. If your body is remotely able.  Just go. I promise you the emails and bills will still be there on Monday.

I am an IT professional during the week, but every weekend is another adventure. Whether it's wandering around a local state park, climbing a peak in the middle of nowhere, or just taking the opportunity to explore - every experience is cherished and deeply appreciated. Outside of hiking, I am addicted to barbecuing, woodworking and a decent book but ideally, my passions are most powerful and rewarding when enjoyed together, and with friends! Stay safe and keep hiking,

All Lubed Up and Ready To Go!

Thanks to MIND, setting up your bike has...

Part 1: Training and Recovery for The Beginner/Intermediate...

The First Step Toward a Women’s Red Bull...

YOGA Special: Doing It In The Office