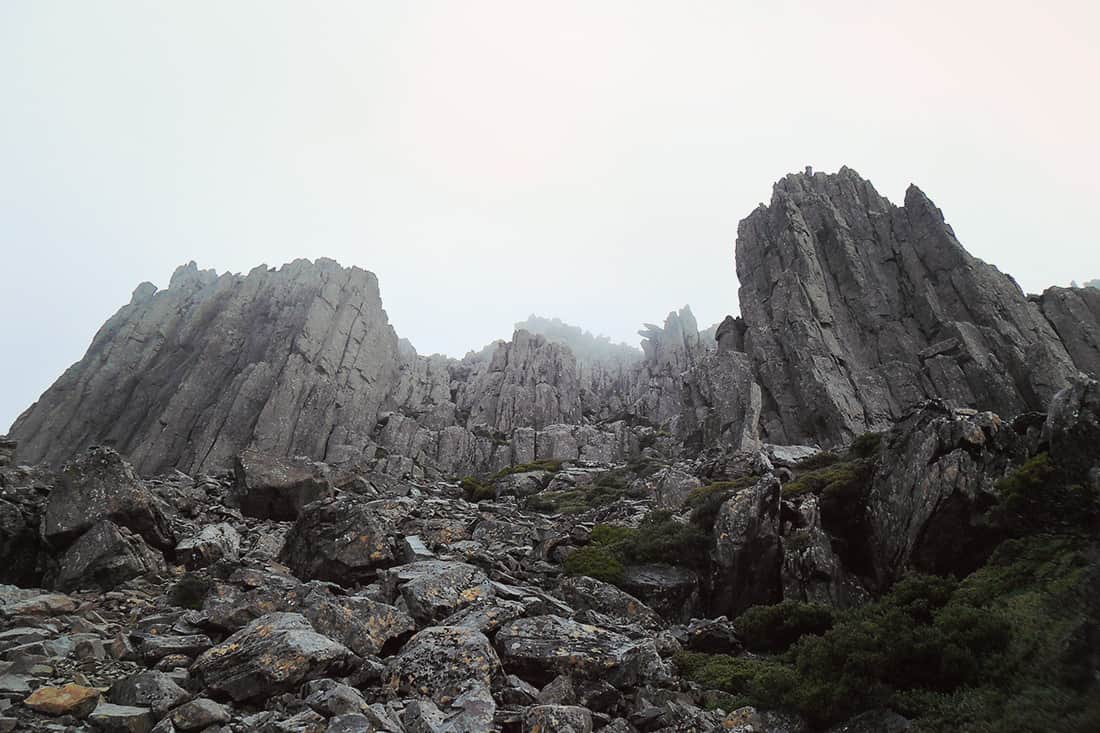 Why Climb The Mountain?

“There’s no point heading up Barn Bluff if the weather stays like this. We won’t get a view anyway.”

That’s fair. “Is that why you climb?” I should have asked. They came to climb this majestic peak, but it was rainy and foggy and the white oblivion was the only view to be gained. Personally, I’d do it anyway.

Something about the mountain excites me. I feel it in the pit of my stomach when I think about it, and my head begins to whirl. There’s a certain feeling it provides, and I can’t get it from anywhere else. My spirit is magnetised towards it.

We were at Scott Kilvert Hut, a pretty lakeside refuge nestled beneath the Cradle Cirque, on the shores of the beautiful Lake Rodway. We didn’t really have a plan, but I didn’t realise until the morning we set out that Barn Bluff was actually attainable from the hut. When I made the decision to climb it again, I was very excited. 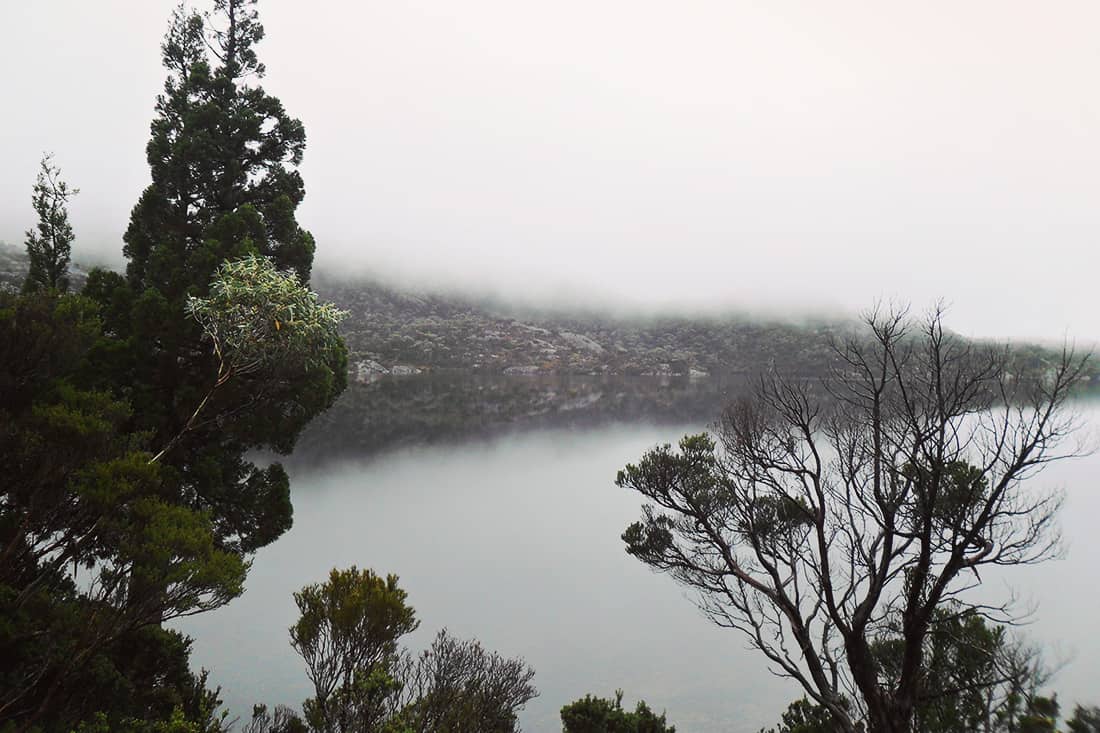 Apart from the wind blowing quietly in the background, it was dead silent in the cloud.

The climb onto the Overland from Lake Rodway is steep and gruelling. After days of rain, it had become muddy and slippery. Eventually, we reached a cairn marking the top of the spur. The Cradle Cirque is an eerie place on a misty morning. Apart from the wind blowing quietly in the background, it was dead silent in the cloud. Upon reaching the turnoff, we went our separate ways – dad to Waterfall Valley, me to Barn Bluff. 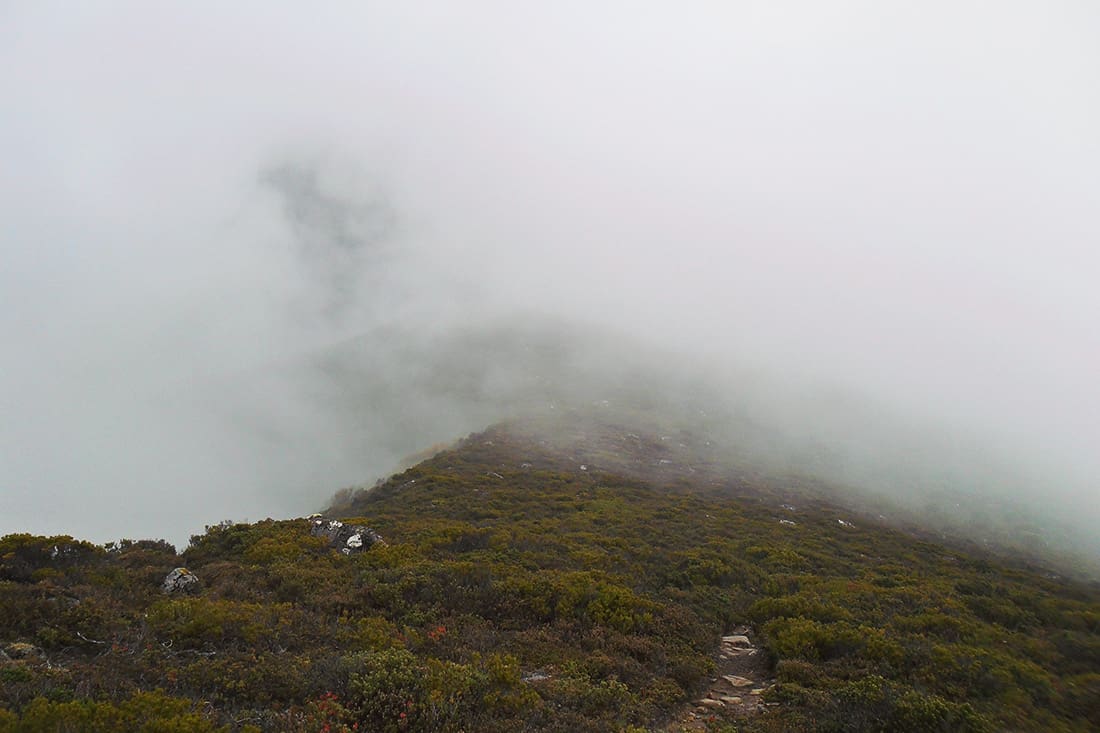 If I became injured or hypothermic and lacked the appropriate skills or knowledge to bail myself out, the consequences would be either death or emergency rescue.

Knowing that I would have the mountain to myself was such a liberating feeling. I’ll admit I was a little nervous to be climbing alone in suboptimal conditions, but it all added to the feeling. When you’re alone, you need to trust in your own ability to respond sufficiently to any situation that arises. There’s something very special about that. It was just the mountain and I. If I became injured or hypothermic and lacked the appropriate skills or knowledge to bail myself out, the consequences would be either death or emergency rescue.

I made good speed over the foothills towards the mountain. Through the mist, I could just make out its hulking shape. The trail disappeared abruptly, replaced by a choppy boulder field stretching upwards to the dolerite towers looming menacingly above. Rock cairns were scattered throughout. They tried to lead me but I often lost them for brief moments as they blended into the dull conditions. 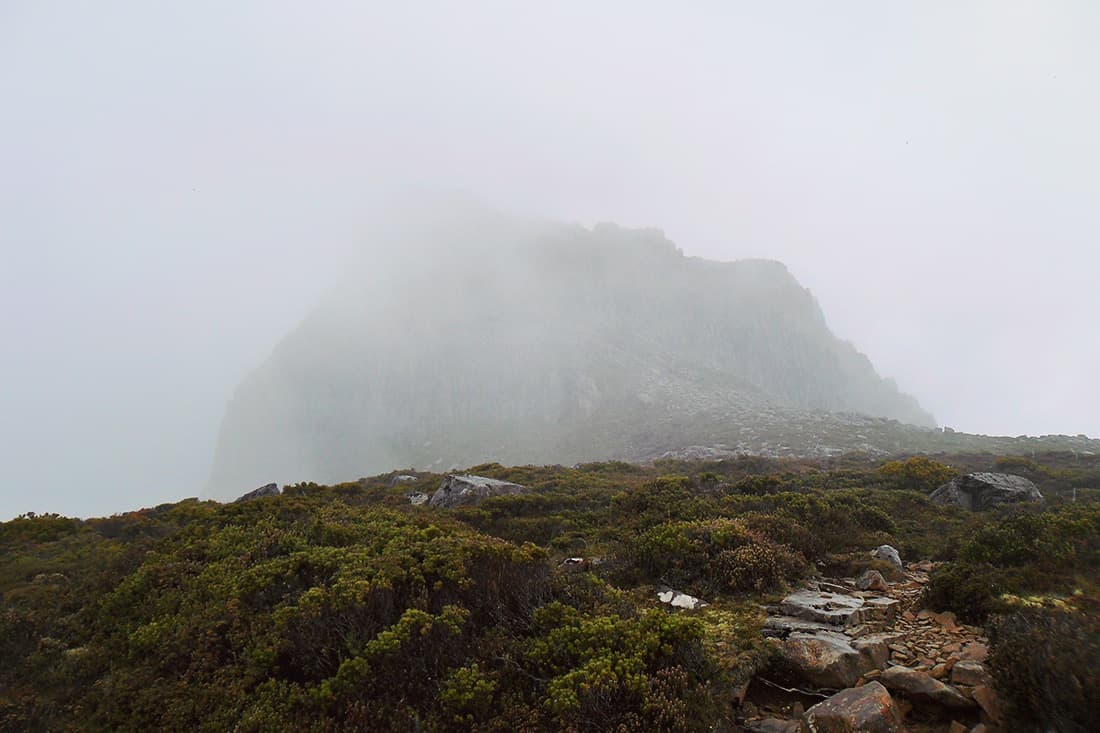 Over a boulder I went, down the other side, and repeated. Hungry crevices were a constant threat as they lay about waiting for their next victim.

I vaguely remembered a lot of the route from last time I was there. Alarm bells rang when things started becoming unfamiliar. When I found myself concentrating very carefully to maintain balance before bracing for the next move, I realised that I had come a different way.

I certainly didn’t remember it being that difficult. Either it was psychological, bred from being alone, or I had ventured astray. The cairns were still there, albeit fewer and farther between. I reckon there are multiple sets of cairns up there, and I got a bad set.

Although not always friendly, I like to think that the mountain enjoys my company, as I enjoy it.

It flattened out when I reached the top of the ridge. Large boulders and slabs of rock were piled up, some balancing and teetering precariously. I continued ahead and lost all cairns. I knew I was close to the top, so I kept going. Over a boulder I went, down the other side, and repeated. Hungry crevices were a constant threat as they lay about waiting for their next victim.

A View From The Top…or Not

The rain made the rock slippery and all the more hazardous. Upon re-finding the cairns, I recognised the summit immediately.  The jumble of rocks that lay before me didn’t contrast starkly with all the others, but they were very special – the top of the mountain. I made it and it felt absolutely amazing. The clouds had no desire to leave and once again, I saw nothing but whiteness from the top of Barn Bluff. 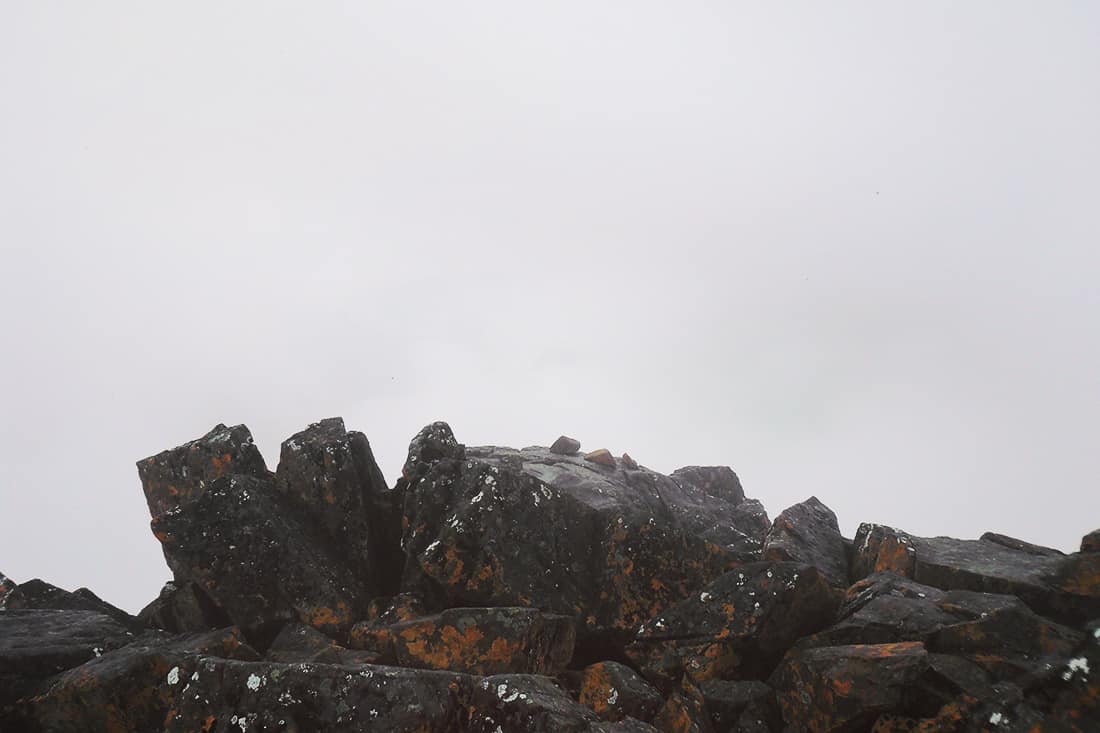 The summit of Barn Bluff, believe it or not. Pic:©Sambo Christie

Many have stood atop its rocky crown, others have retreated shy. To spend time with the mountain is a privilege. There is so much it can teach me.

On a sunny day, the mountain will provide you a vantage to look out upon the things that surround you. For me, the mountain offers so much more than that. It’s cleansing of the spirit. Bad moods and my worldly angst dissipate in the face of the mountain’s challenges. I don’t pit myself against it; it allows me to climb up it. Although not always friendly, I like to think that the mountain enjoys my company, as I enjoy it.

The mountain has seen so much. It has suffered the darkest winters and the deepest snows. The harsh summer rays beat down upon it. The purest blanket of stars circulates glimmering through the night sky as the mountain sleeps. Through the years, countless souls have treaded upon its flanks. It has felt euphoria and pain, life and death. Many have stood atop its rocky crown, others have retreated shy. To spend time with the mountain is a privilege. There is so much it can teach me.

It’s important to recognise that when you are at the top of the mountain, you are only halfway there. Fortunately, I was able to follow the ‘proper’ route down without any problems. As I got off the steep ground towards the end of the boulder field, I felt relieved.

The slippery conditions made for a sketchy descent, and I felt safer when I was hopping over rocks rather than clambering down mini-cliffs while the void lurked ominously below. 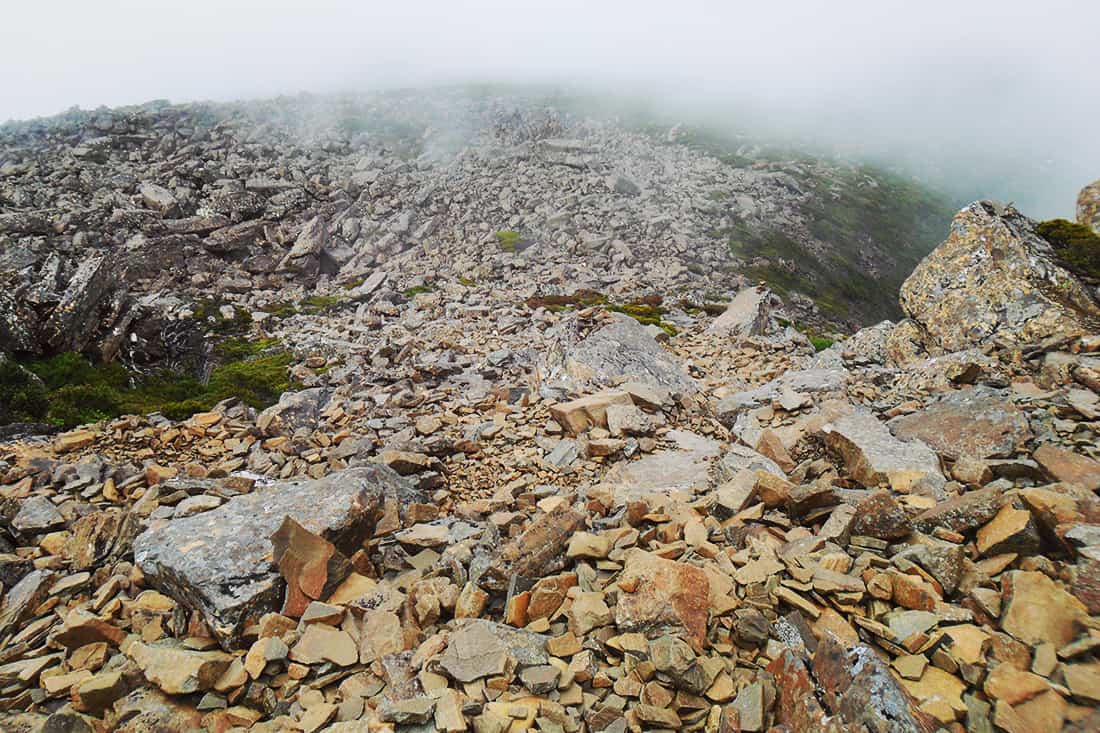 It’s important to recognise that when you are at the top of the mountain, you are only halfway there.

Walking away from the mountain, I felt lighter. We should all climb the mountain once in a while. It has a way of bringing every ounce of you into the moment. When you’re up there, you can’t afford to live in the stresses and confines of your normal world. 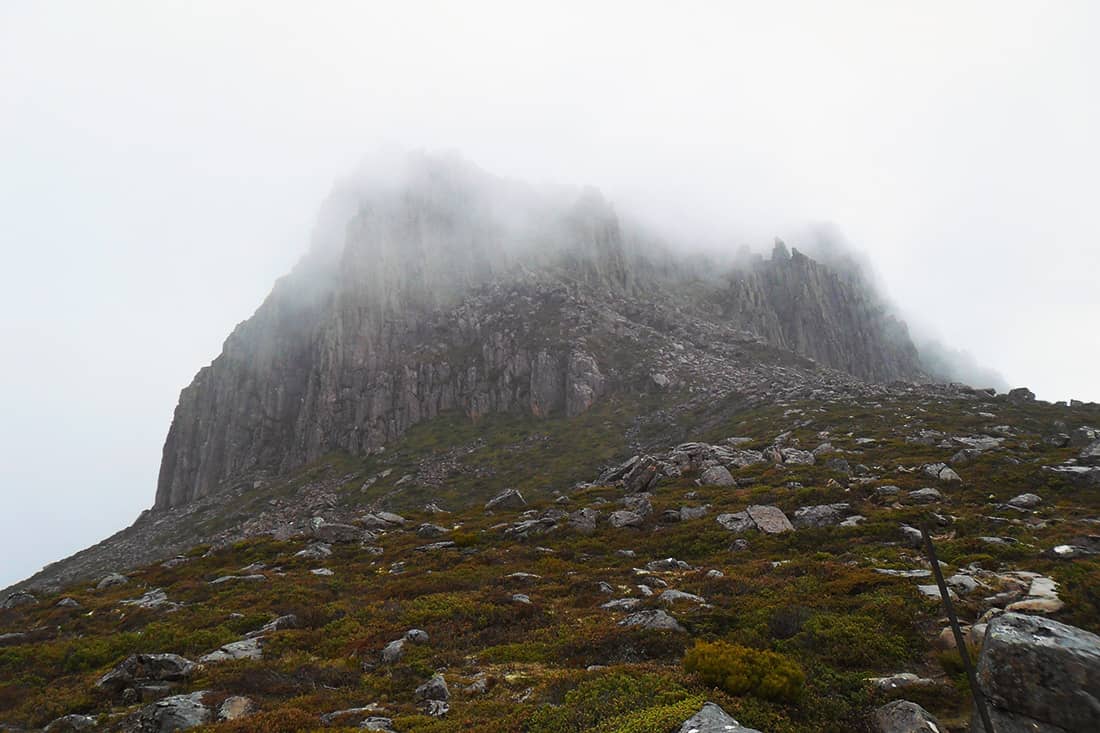 There she is, the mighty Barn Bluff, shrouded in her mysterious cape of mist. Pic:©Sambo Christie

Sam is currently studying a Bachelor of Outdoor and Environmental Education at Federation University. He is an aspiring adventurer and outdoor leader and enjoys sharing his passion for wild places through writing. See more of his work and get in touch via his blog at Sambo Christie.

Have You Got Your SHREDLY On?

To Strava or Not to Strava…

The Life of a Single Speed Enthusiast –...

Bikepacking Made Easy: An Illustrated How-To

Keeping It On The Right Track!