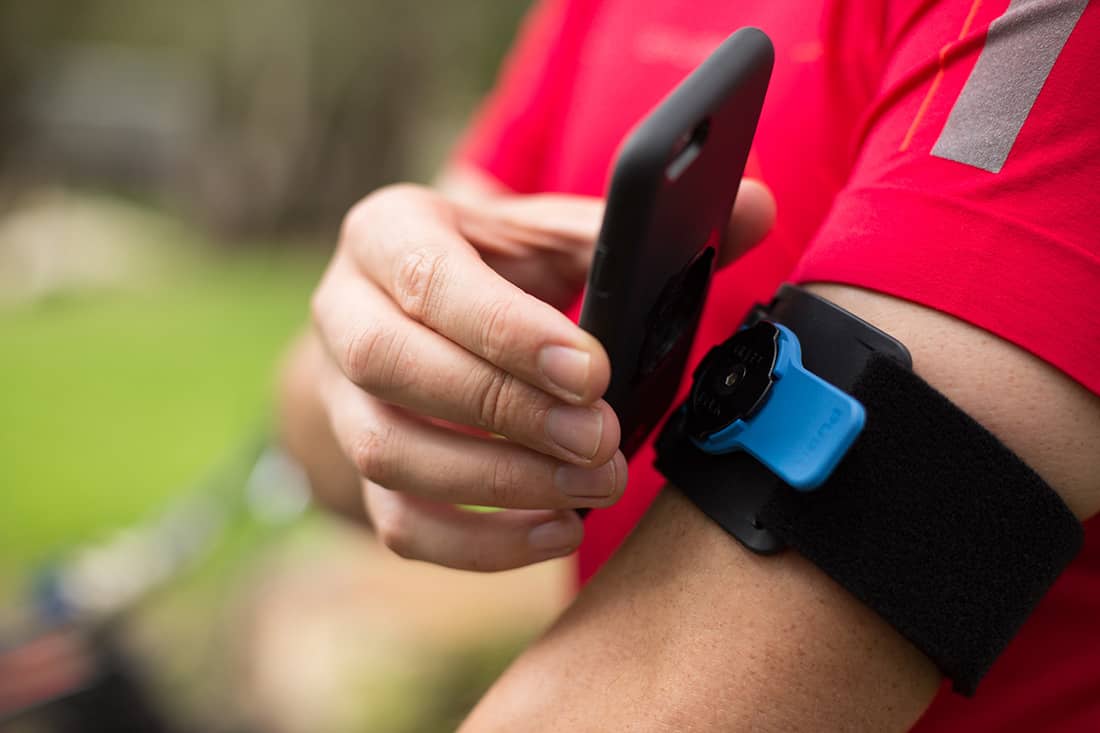 Are you being buried alive under a mass of smartphone holders?

Well, we think we may of found the solution for you. Say hello to the Quad Lock®. A clever and elegant one fit smartphone mounting system.

It’s not uncommon to have a multitude of smartphone holders around the home. One for running, one for riding, one for the car. So we were over the moon when the lovely people over at Bike Corp kindly sent us the ingenious Quad Lock® system to review. But first let’s just find out who Quad Lock® are.

The Quad Lock® was developed by a Melbourne based designer Chris Peters and his business partner Rob Ward. Chris was frustrated by the lack of iPhone mounts that were sturdy enough to handle being on a bike. 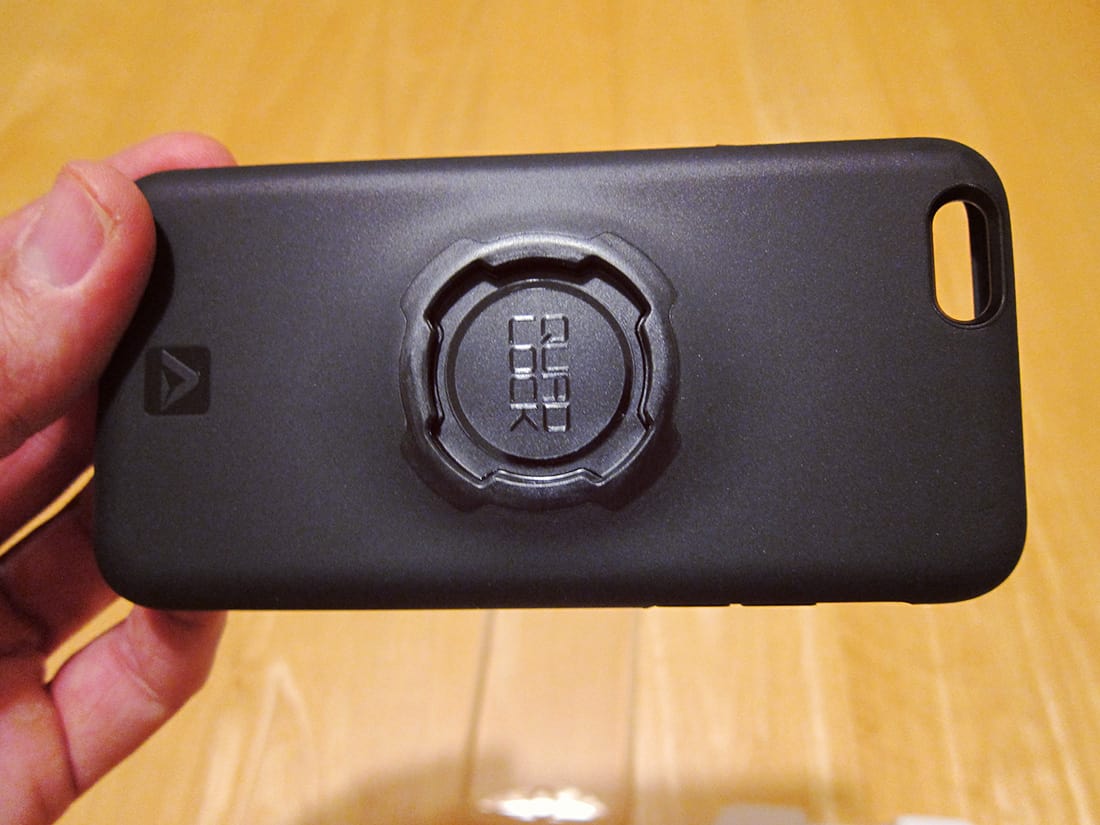 The Quad Lock® with its Innovative Twist, Lock & Go™ system allows you to mount your smartphone in an instant and gives you the confidence that your device is always securely attached without the need for cumbersome lanyards, or straps. Pic:©Tyres and Soles

“I had just moved to Sydney at the time and found having access to Google Maps very handy for getting around. Cycling was my main method of transport and I thought it would be great if I was able to see my iPhone while riding”.  Chris Peters.

Not having the initial capital to take the product to market, Chris and Rob turned to a Crowd funding approach and were blown away by the response they received from the public.

Confident that they were onto something here, Chris and Rob went ahead and launched the Quad Lock® Kickstarter project on the 5th of December 2011. Within the first two weeks it reached and surpassed its funding goal and received positive feedback from the cycling community and industry.

The demand following on from Kickstarter kept on growing so the duo set up an online store to allow customers to continue to order. To date hundreds of thousands of Quad Lock products have been shipped to over 4,000 cities in over 100 countries and sales continues to grow at a steady rate.

The Keystone of the Design

The fundamental part of the Quad Lock® design is the case itself. The Quad Lock® system is actually a phone case so there is no need to dock your phone into a separate holder.

Once you’ve clipped the Quad Lock® case onto your phone, the phone then simply clips onto any of the Quad Lock® mounts, be it on your arm, on the dashboard or windscreen of your car or on the handlebars of your bike. 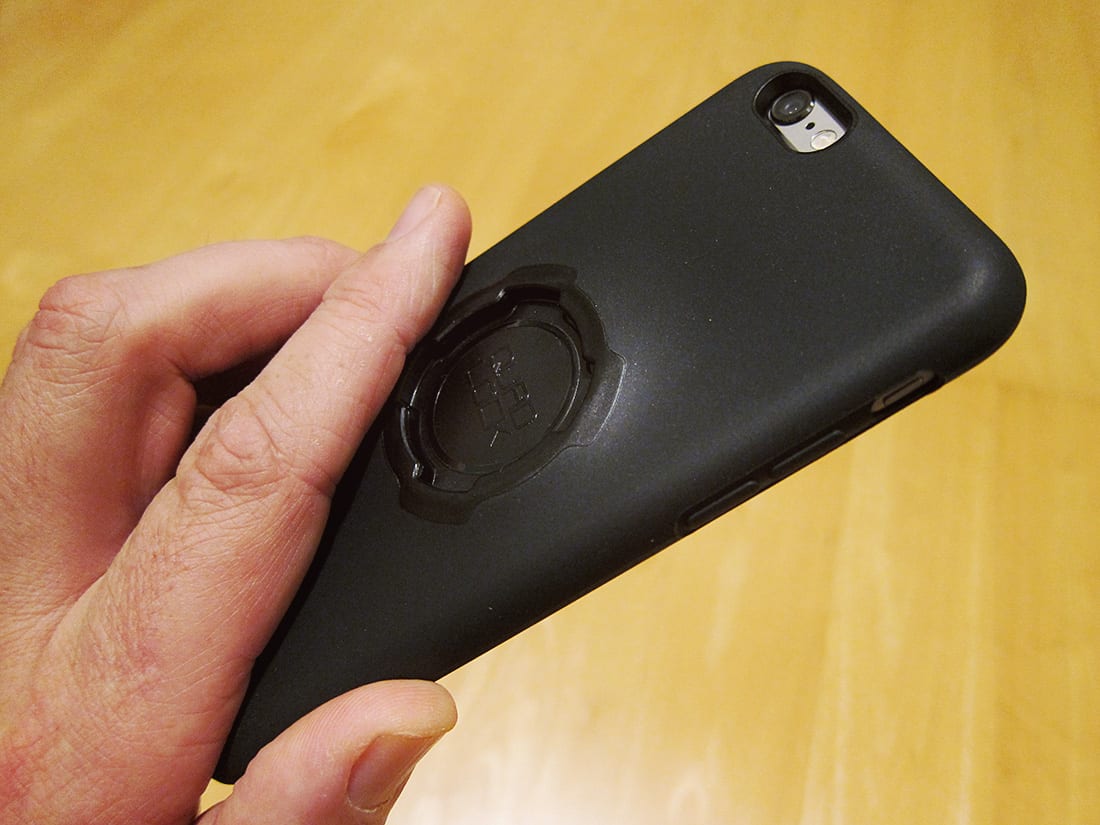 The Quad Lock® has been designed to fit most smart phones, so all the phone features such as camera etc. are not obstructed, just like a standard phone case. Pic:©Tyres and Soles 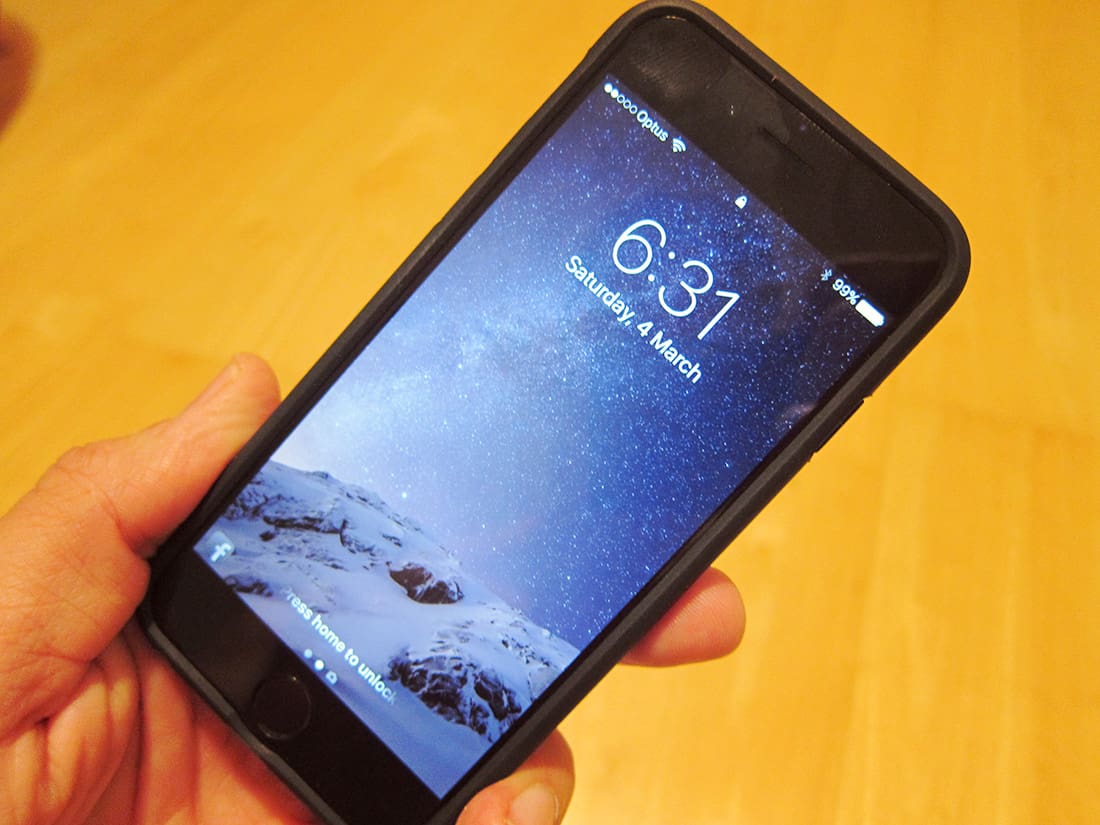 The case itself is very tough! Made from impact absorbing material. Pic:©Tyres and Soles

The case has a slimline design, so it feels just like a normal phone case when in your pocket. And don’t worry if you drop the phone as the case is made from a very tough impact absorbing plastic. The case is actually better than many specific so-called strong cases I’ve purchased in the past.

“Quad Lock, as it’s called due to the four tabs which are integral to the patent pending system,  is a unique solution which allows you to securely and conveniently attach your smartphone to your bike, car, or arm and that’s just the start of the many mounting options available.“

Quad Lock® claim that their dual stage locking mechanism (patent pending) will never accidentally release itself. This is good news because the last thing you want as you hurtle down a rocky trail is your smartphone falling off your bars and into the spokes. This could end up very badly and not just for your spokes.

The Quad Lock® system focuses on four main areas of applications; Ride, Run, Drive and Life. We got our hands on the Ride, Run and Drive kits as these aligned with what we do most weekends. Drive to the trails and then either hike or ride. 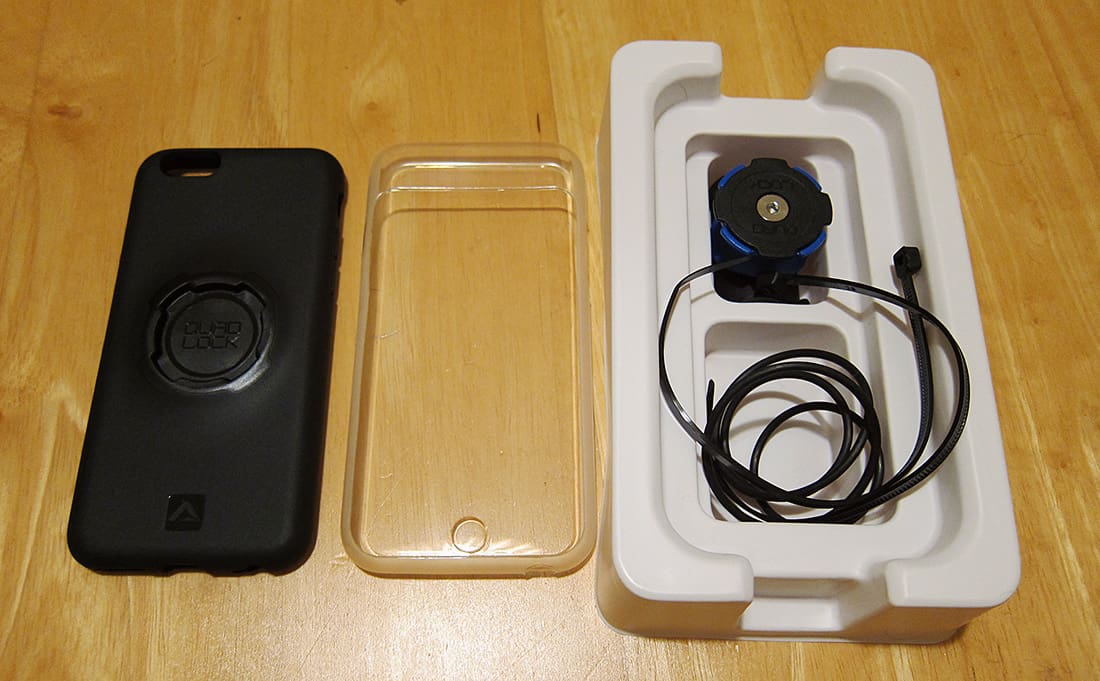 The Quad Lock® RIDE kit comes with everything you’ll need to get going. Pic:©Tyres and Soles 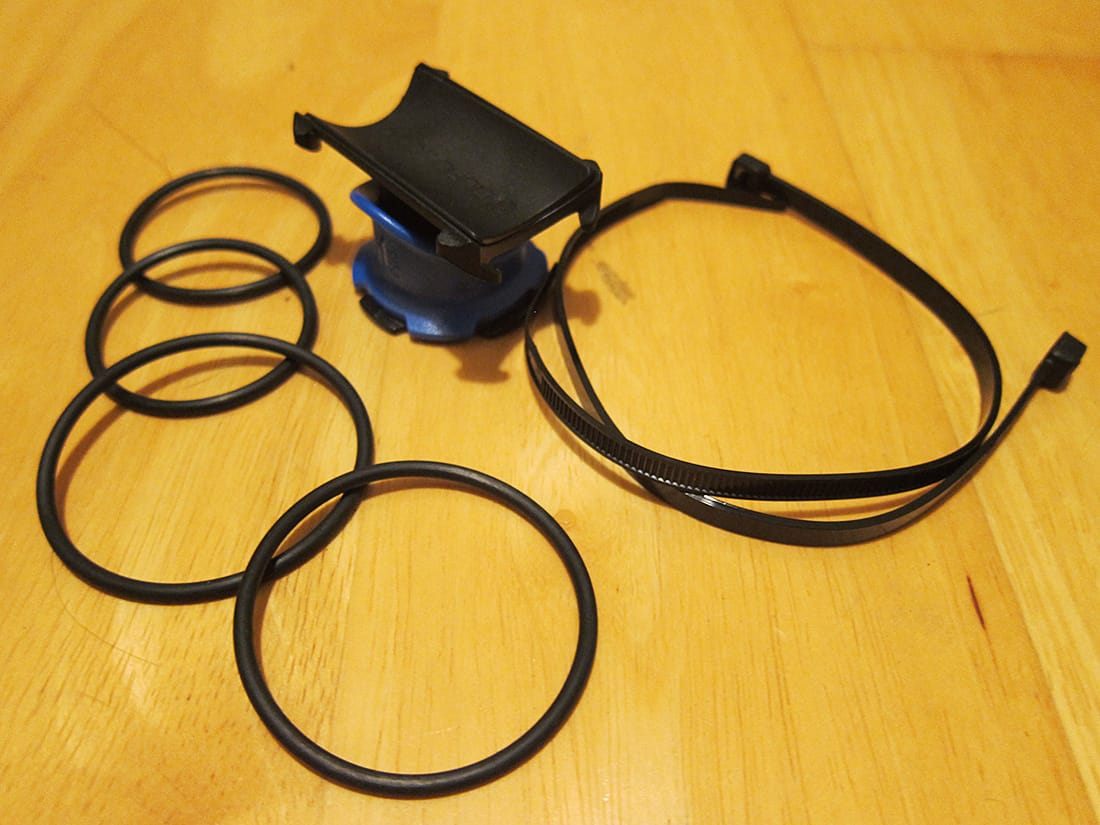 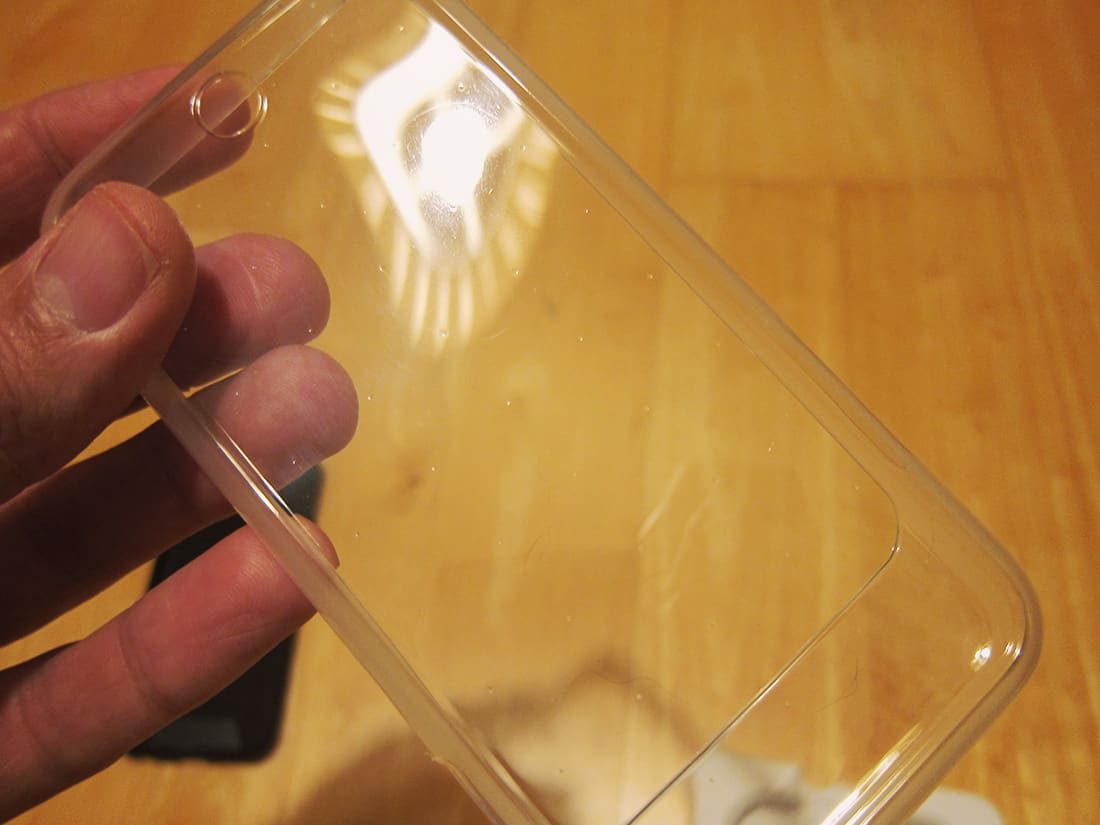 The RIDE and RUN kit both come with a weather resistant Poncho to protect from rain, dust, sweat and mud. But note, if you are using a thick screen protector on your phone with the poncho, this may affect the touch screen ability. Pic:©Tyres and Soles

All you need to do is place the mount on the bar, use either the zip ties or the rubber O rings. We like the O rings as you can easily pull it on and off without having to snip zip ties every time you want to remove it.  Align the rear of the phone to the mount, push down and turn. That’s it!

The blue sleeve on the mount is spring loaded. To release the phone, all you need to do is pull down the sleeve, twist the phone and off it comes. 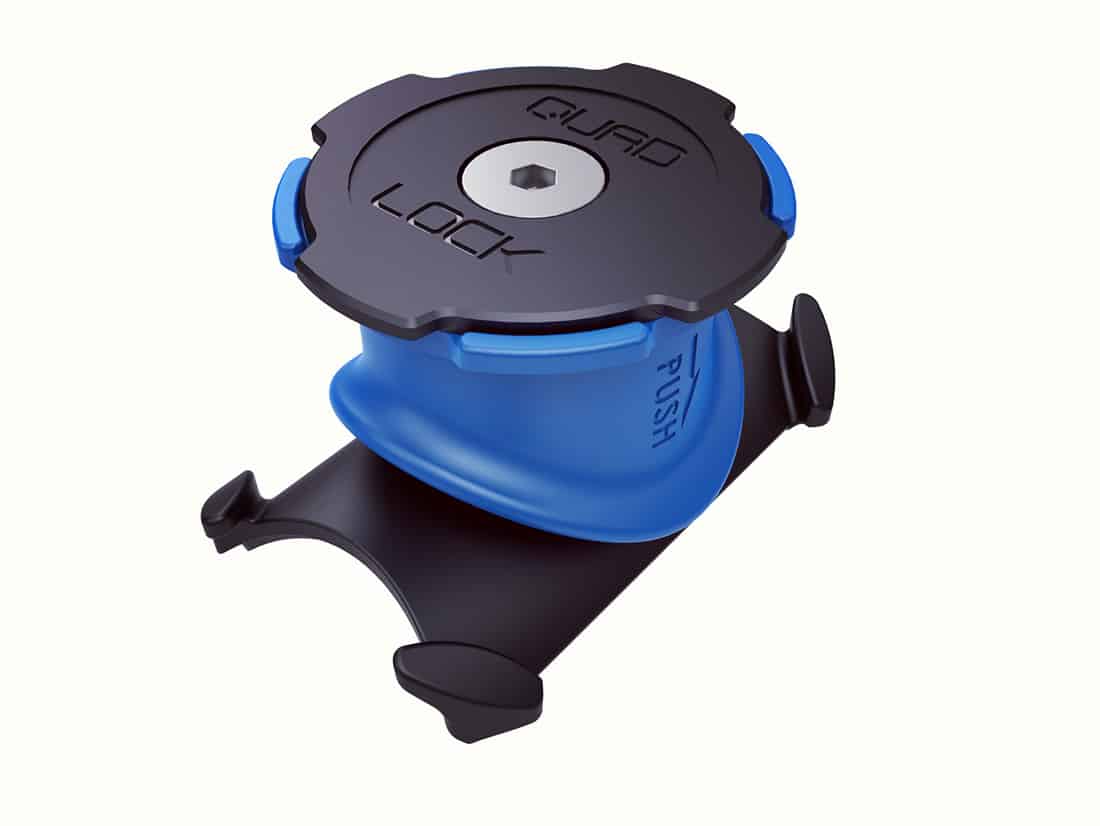 The Quad Lock® RIDE mount fits pretty much all handlebars. 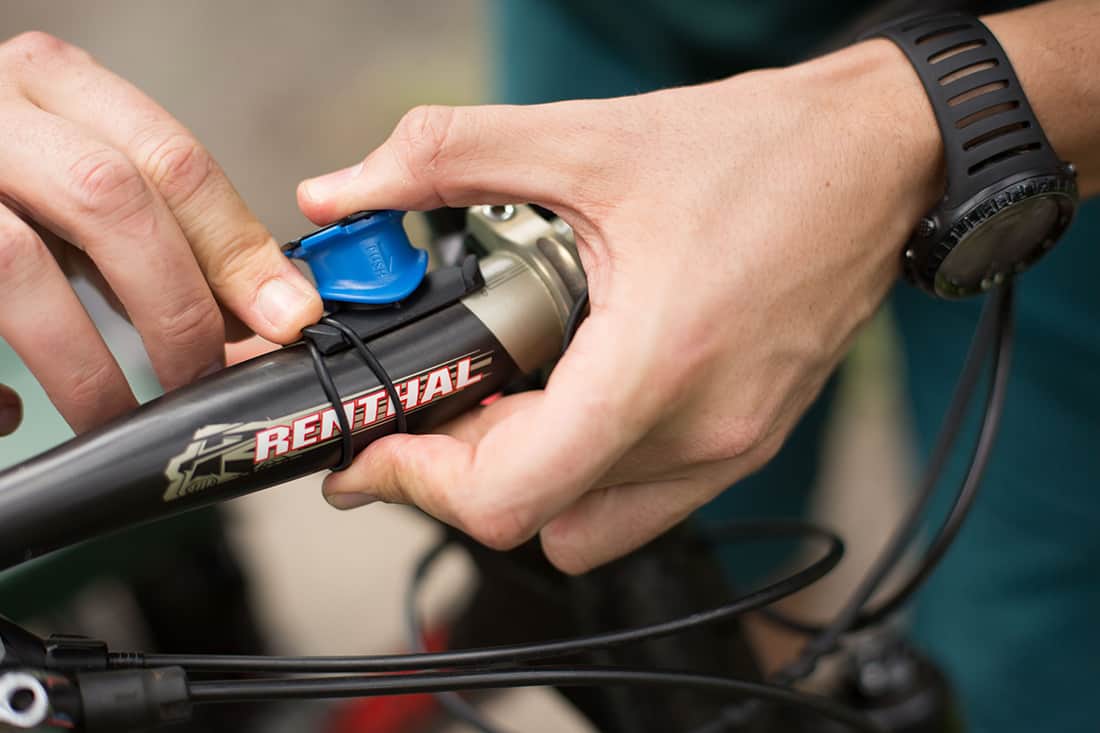 The mount fits on to the bar very easily with the use of the rubber O rings, which are included in the kit. Pic:©Richard McGibbon

The mount can fit on both stem or handlebars and fit tube diameters ranging from 25-40mm in diameter. For larger tube size, you can use the longer zipties that come with the kit. 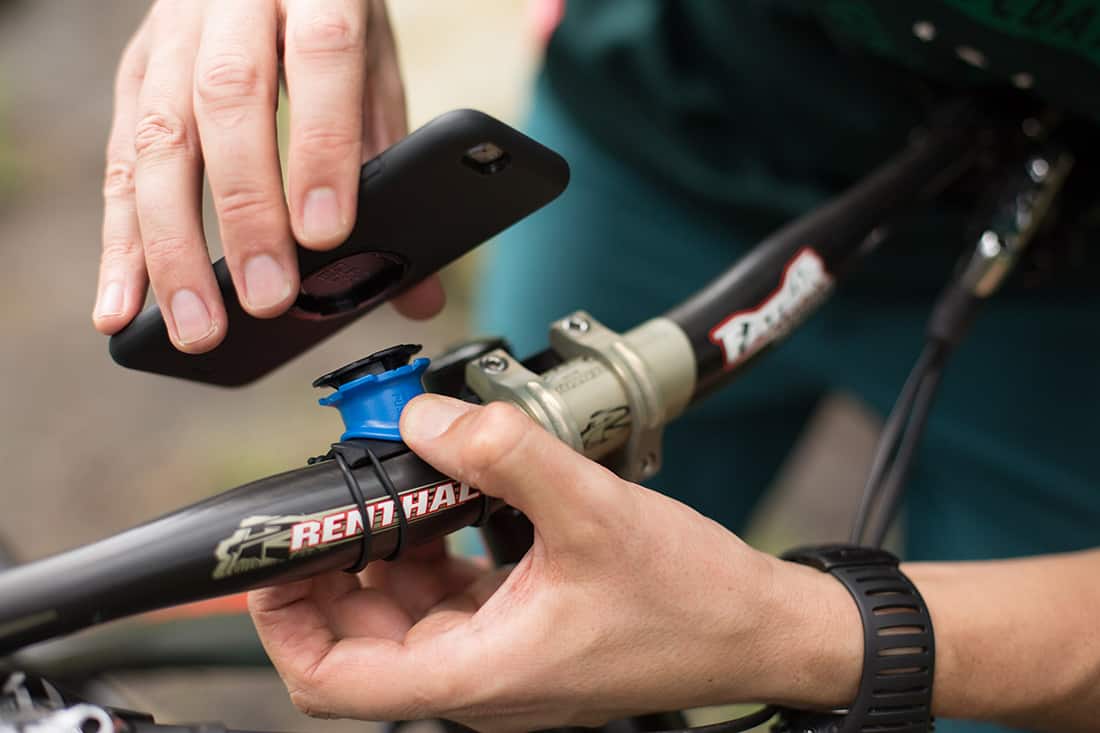 Attaching the phone to the mount is very easy with its Twist, Lock & Go™ system. Pic:©Richard McGibbon

Out on the trails it worked well, staying firmly in place all day, but we’ve only used it on mellow XC trails so far. It really came into it’s own for us when we were trying to find a trail head and having to ride through suburbia.

We could use a combination of Google® Maps and Strava to pin point an exact location. It was also very handy out on the trails to follow a certain trail, using the Strava app, stop and take some photos, answer calls. Well, not the last part but you get what we’re saying…it’s bloody handy having it there in front of you. 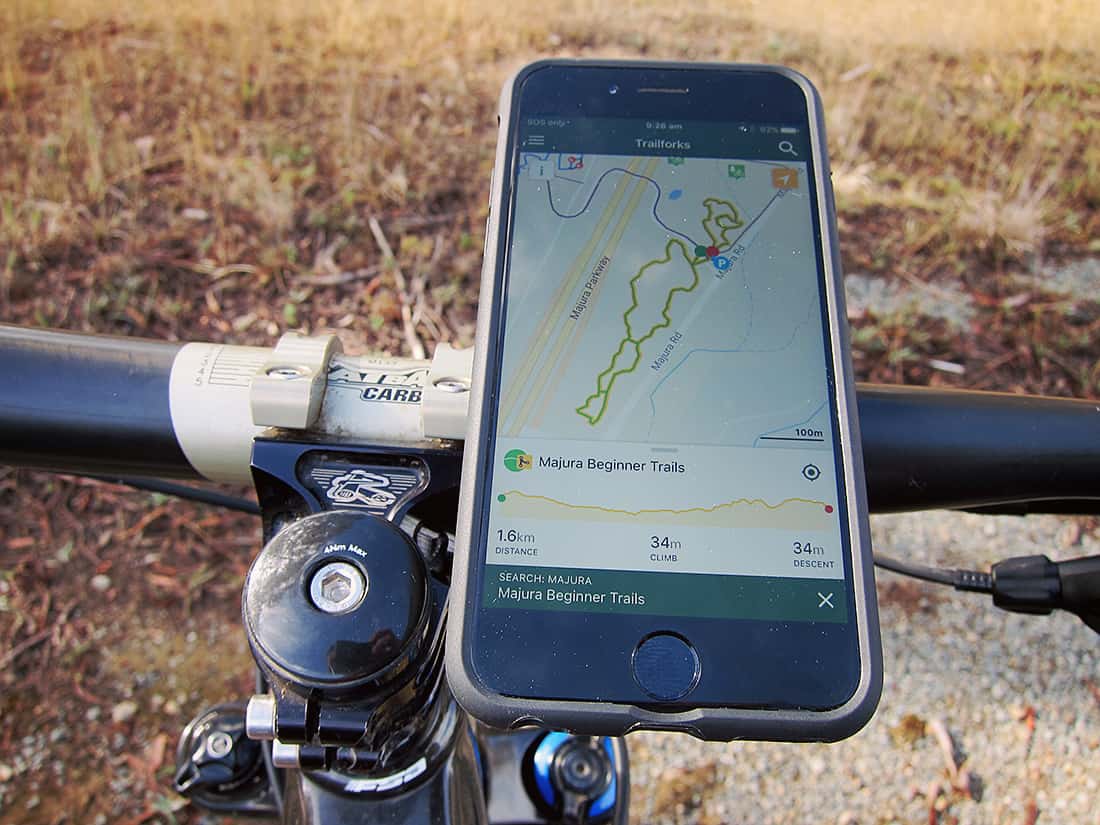 The Quad Lock® firmly secured on my bars. Pic:©Tyres and Soles 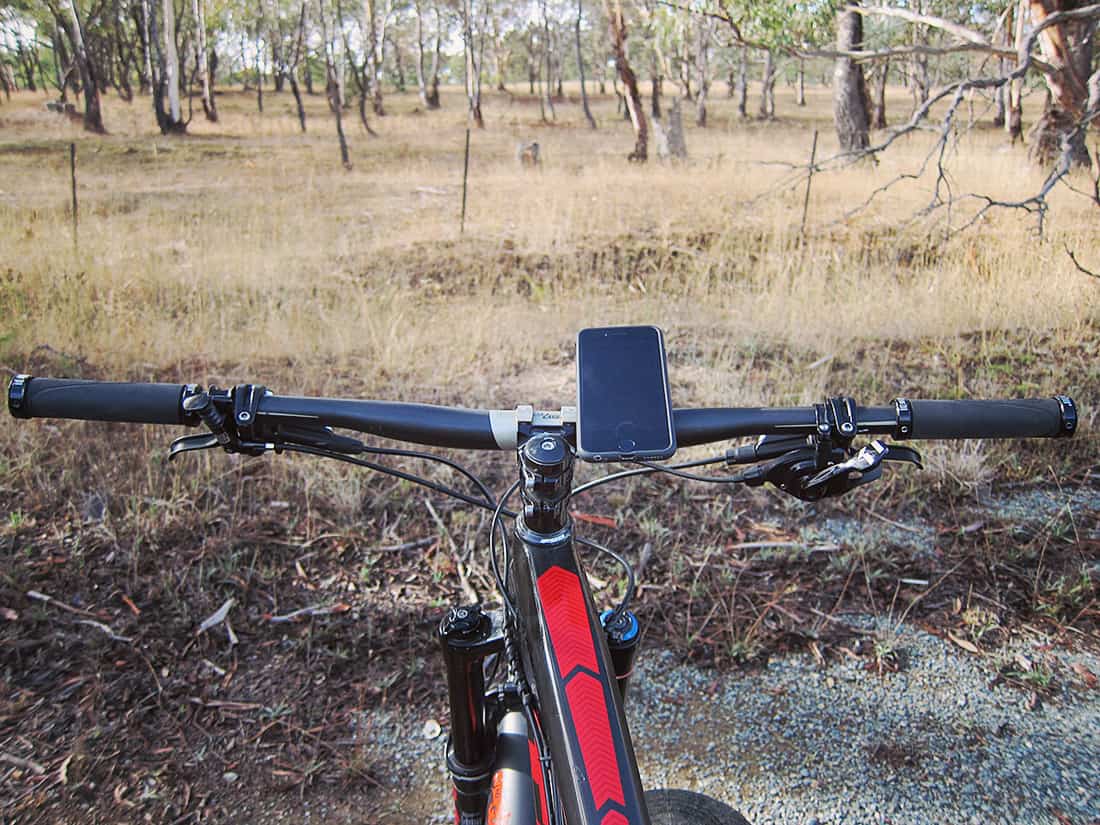 Being able to use Google maps adds another level of information to our rides. Especially good for finding your way around suburbia to the trail head. Pic:©Tyres and Soles

Although we don’t do a lot of trail running these days, we do hike and this is a great piece of kit for those shorter day hikes. We can absolutely see it’s benefits for trail running also, what with the likes of apps such as Strava et al. 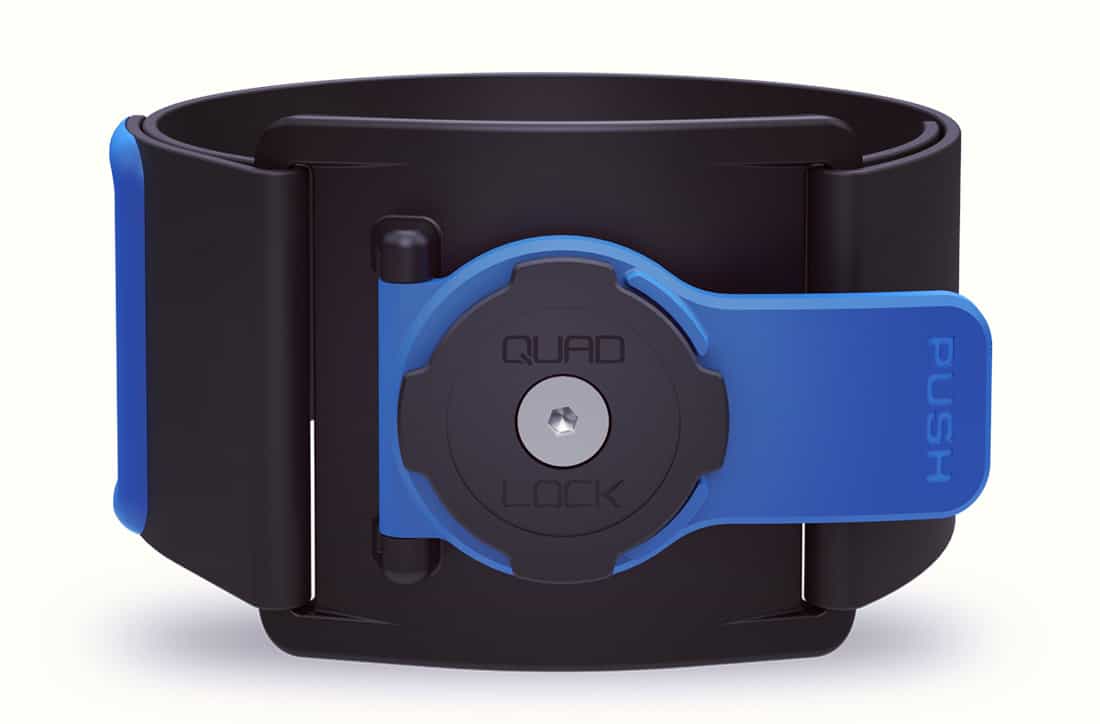 The Quad Lock® RUN mount is set into a strong arm band that fits snugly onto a wide range of arm sizes.

The arm strap is very secure with its unique locking mount. Pic:©Richard McGibbon

Installation is quick and intuitive. Simply wrap the band around your arm and secure it with the velcro strip. The band is made from a comfortable Nylon Lycra that can be adjusted for both small and large arms between a circumference of 17 – 38cm or 6.5 – 15 inches.

The mount uses the same Quad Lock® mechanism, so just line it up, twist and lock it in place. To remove, simply press down the blue lever and this will release the locking mechanism, then just twist the phone and off it comes.

We headed off for a hike/trail run/shamble…to see how it felt on the arm. There was no uncomfortable bobbing around and the strap felt solid all day. The phone (iphone 6 in this case), although a fairly weighty device to have attached to your arm for several hours, it never felt cumbersome.

I put this down to how well the strap design and locking mechanism worked. In a strange way, it actually felt quite comforting to have it there. It was certainly better than having it bobbing around in my shorts pocket or having to stop and pull it out of my pack throughout the day. Plus I knew where it was at all times.

I used this system at the gym for a week and it was great. I had my music playing and one of my sports/training apps running. What I really liked was that I didn’t have to keep trying to fit my phone back into its sweaty clumsy neoprene pouch every time I wanted to check it. It was there right on my arm, plain as day and very accessible.

After the gym session I jumped on my bike, clipped the phone onto the bar mount, switched on Strava and rode home. Aahhhh life is cruisy. 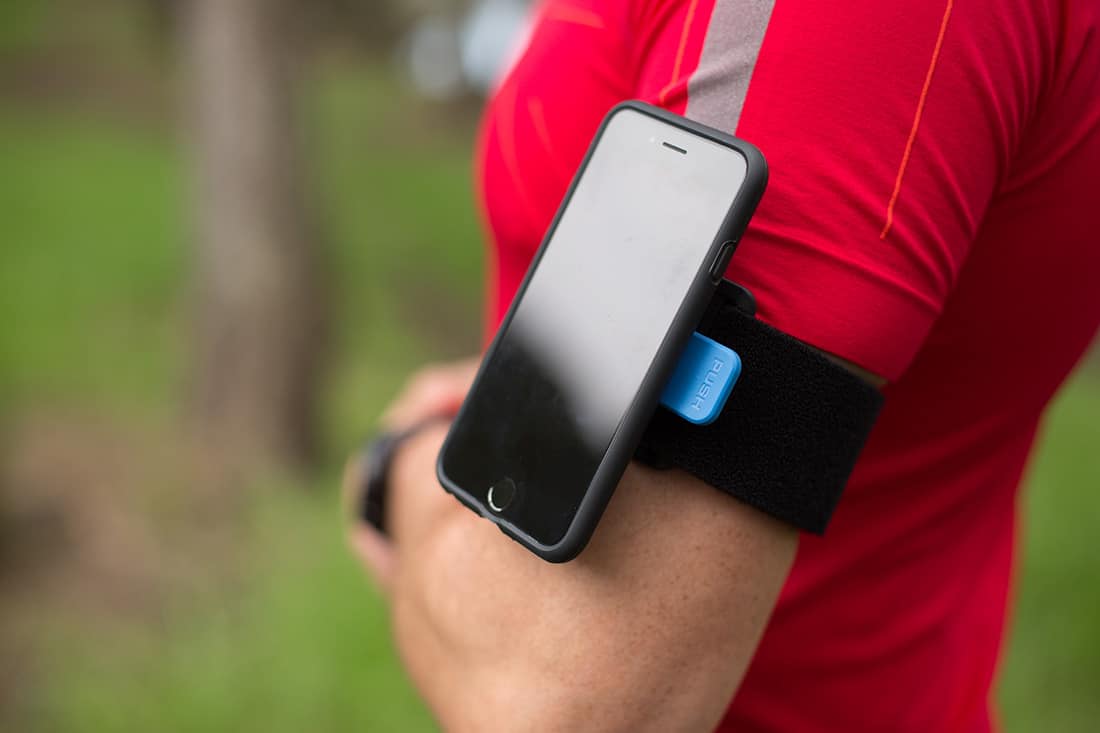 The Quad Lock® RUN setup was secure and easily accessible, staying firmly in place throughout the day. Pic:©Richard McGibbon

If you’re like us and have tried a few car mount systems, then we understand that you may thinking “oh not another one”. But trust us, once you get this set up you really will be sending all your others to the recycling bin.

Being able to use a single system like this is, well, sort of enlightening. OK, that may be a bit over the top but it really is a sweet device that once you own one, you think why the hell didn’t you get one sooner. Well that’s because nobody had invented one. 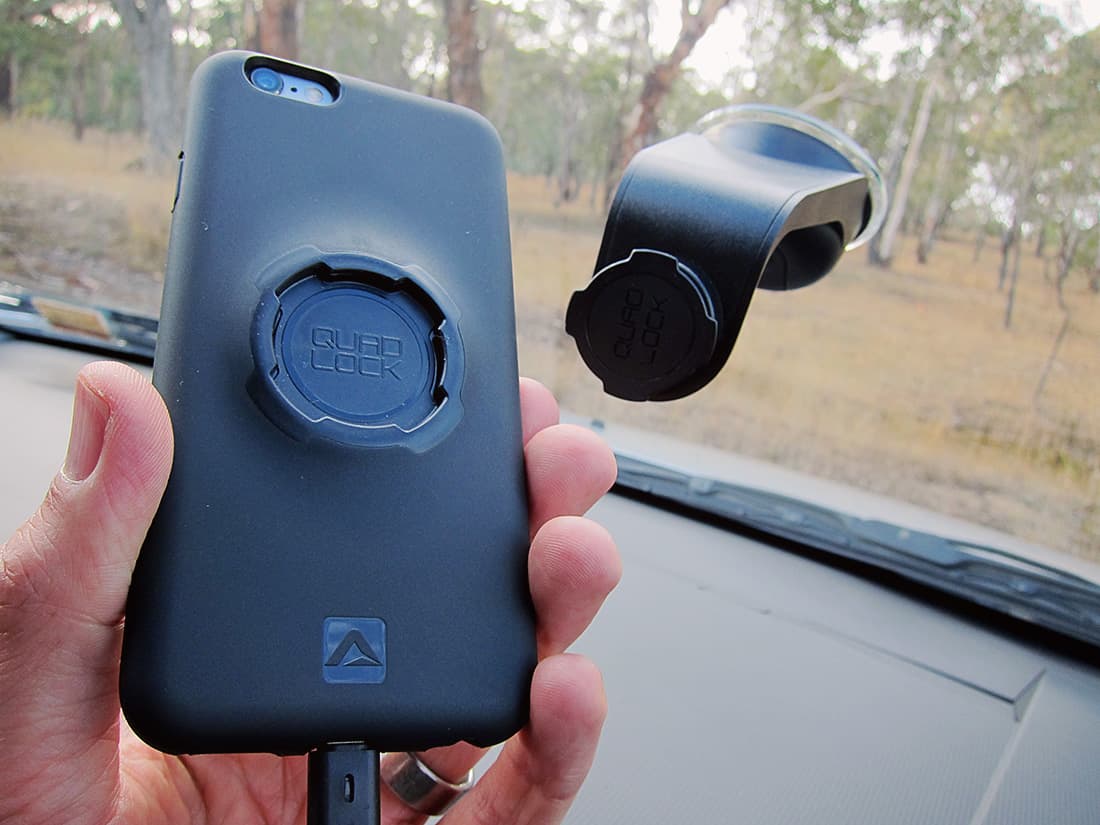 The Quad Lock®. One case to rule them all. Simple and effective. Pic:©Tyres and Soles

You can mount the phone using the windscreen mount or a little sucky dish thing (dash pad) that sticks to your dashboard. We opted for the windscreen option as it worked best for our vehicle set up.

We’ve used several windscreen mounts in the past that claim to be vibration free but they always end up vibrating at some point. The CAR Quad Lock® mount actually lives up to it’s claim of being vibration free. This is probably due to its “patented cam locking industrial-strength suction cup and super rigid body”…Oh yeah! 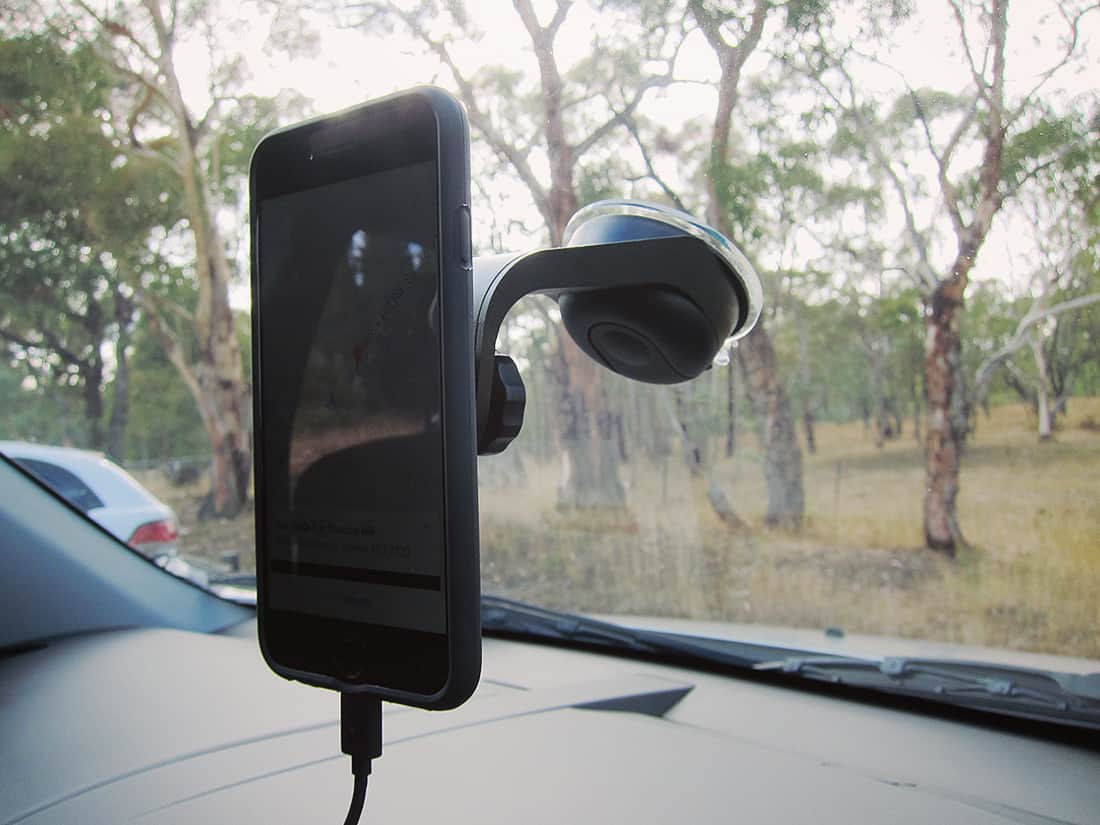 The Quad Lock® locked, loaded and ready to go! Pic:©Tyres and Soles 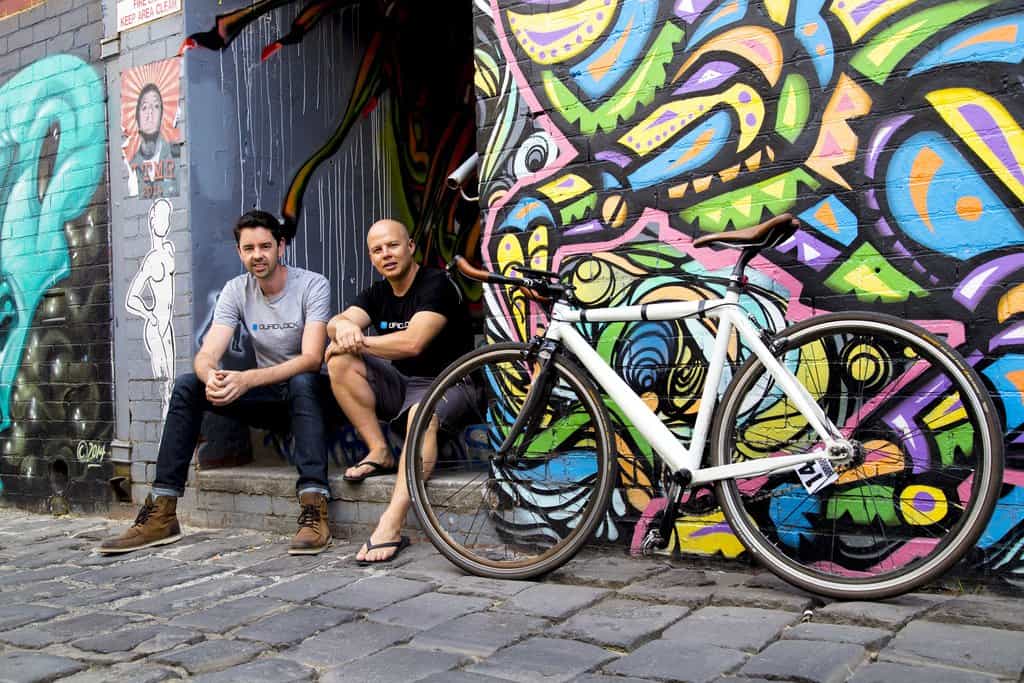 The brains behind the Quad Lock®. Chris Peters and his business partner Rob Ward.

The Quad Lock® mounting systems are available at most bike shops. Ask the staff next time you’re there.

To sum it up…The Quad Lock® is about being able to use a navigational system that we are all familiar with (e.g Google, Apple maps) and your favourite fitness apps such as Strava, and bring them all together via a single and elegant mounting system that’s transferable across a variety of modes of transport. There’s a tool for every job but Quad Lock® seem to have merged several tools into one.

We use the RIDE, RUN and DRIVE kits seamlessly these days. From hopping into the car, to jumping on the bike or heading out for a day hike. Not having to scramble round for different mounting devices just makes life a little easier, and isn’t that something we could all do with a little more of?

The Convict… choose your distance, the rest will take care of itself

All Lubed Up and Ready To Go!

Feel The Difference with the Source Hipster Hydration...