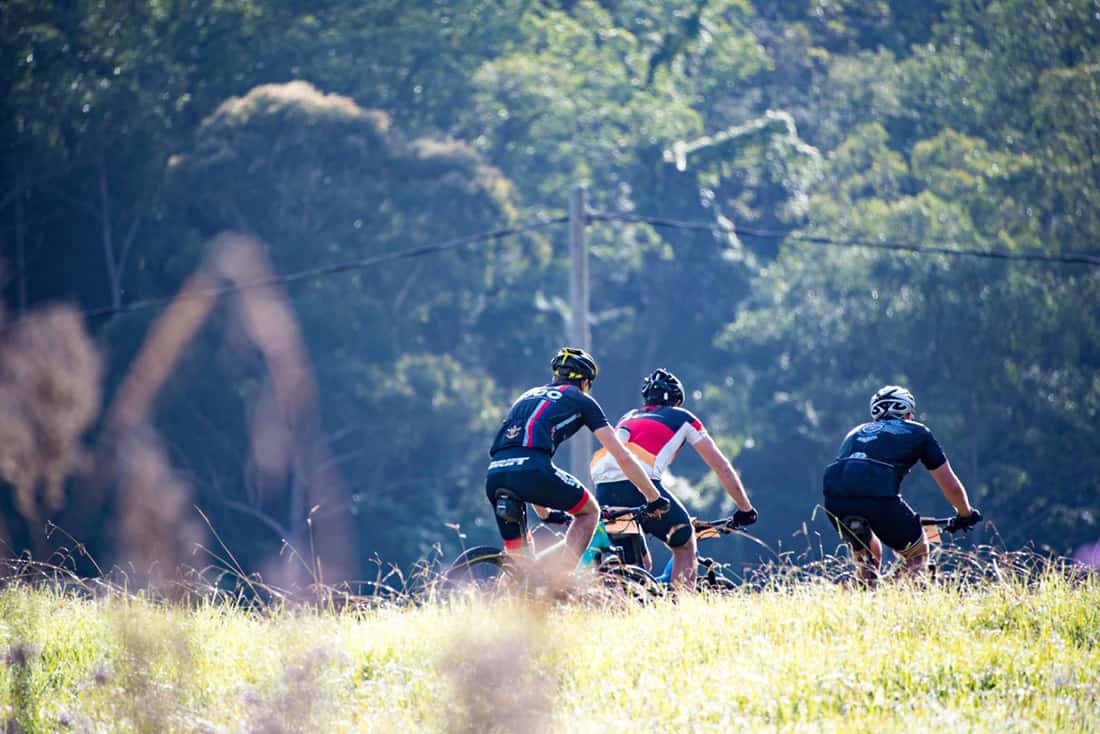 Home Featured ArticlesAdventure The Convict… choose your distance, the rest will take care of itself

The Convict… choose your distance, the rest will take care of itself

It was a cool Autumn morning as I drove up the winding road to the tiny village of St Albans, northwest of Sydney.

The flat valley was dotted with farms, while the hills above were shrouded in fog, hiding the ridges and gullies I’d be climbing to ride with around 800 fellow riders in a short while. It was race day at the Convict 100, another one of the “classic” xcm races on the calendar.

The tiny village was a hive of activity, as all mountain bike events seem to be. Riders checking over their bikes, friends and family there to cheer on the racers and volunteers and locals to help things run smoothly. There’s always a buzz of nervous energy in the air.

I parked the car, and walked over to cheer on Kurt and Grant, who I’d come up with and were racing the 100km event today. Once they’d set off, a few last checks of the bike, the food and of course the final port-a-potty visit (c’mon it’s race day, we all get nervous) it was time to head for the start of the 68km race. 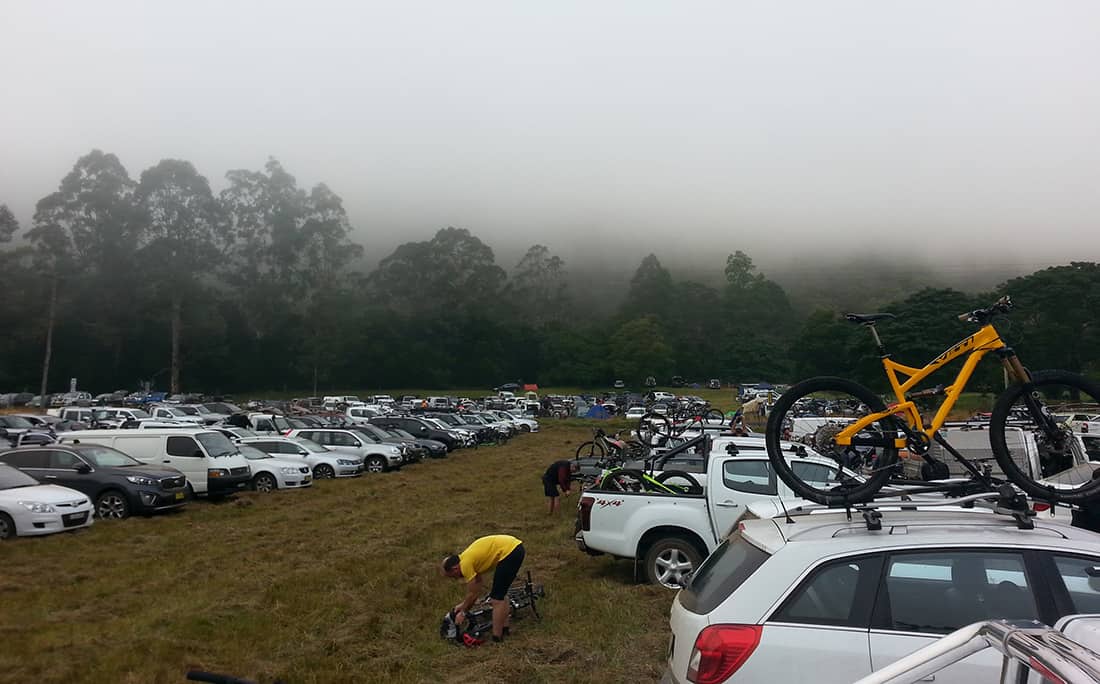 A foggy start to the morning before the race. Pic:©Sean Hill 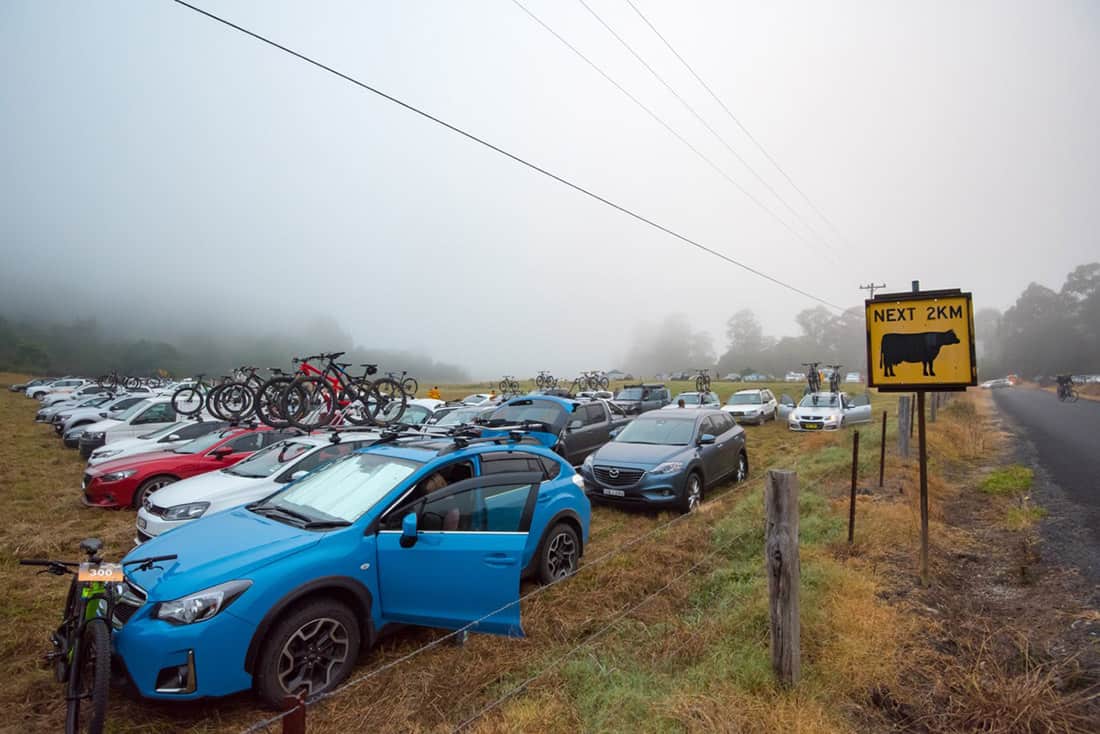 Self Doubt Sets In

In the lead up to the race, I’d not really trained anywhere near as much as I’d liked. I’d been on the bike regularly, but the longer rides hadn’t been getting done – work, kids sport and life in general just got in the way. I’d really started to convince myself that I was going to struggle in this event.

I’d done two Half Flings and a quarter Kowalski previously, but this was further and had a lot more elevation. I decided that today’s race was purely a recce – take my time, maybe a photo or two and see what it’s like. Somewhere between 4 and 5 hours wouldn’t be too bad, I told myself.

It was also the first race on my new steed – I’d upgraded to a 2017 Giant Anthem 2 from my much loved and ridden Talon hardtail. I was super keen to see how the bike performed over the day. I’d head it checked over and put tubeless tyres on only a few days prior – hopefully they’d sealed ok! 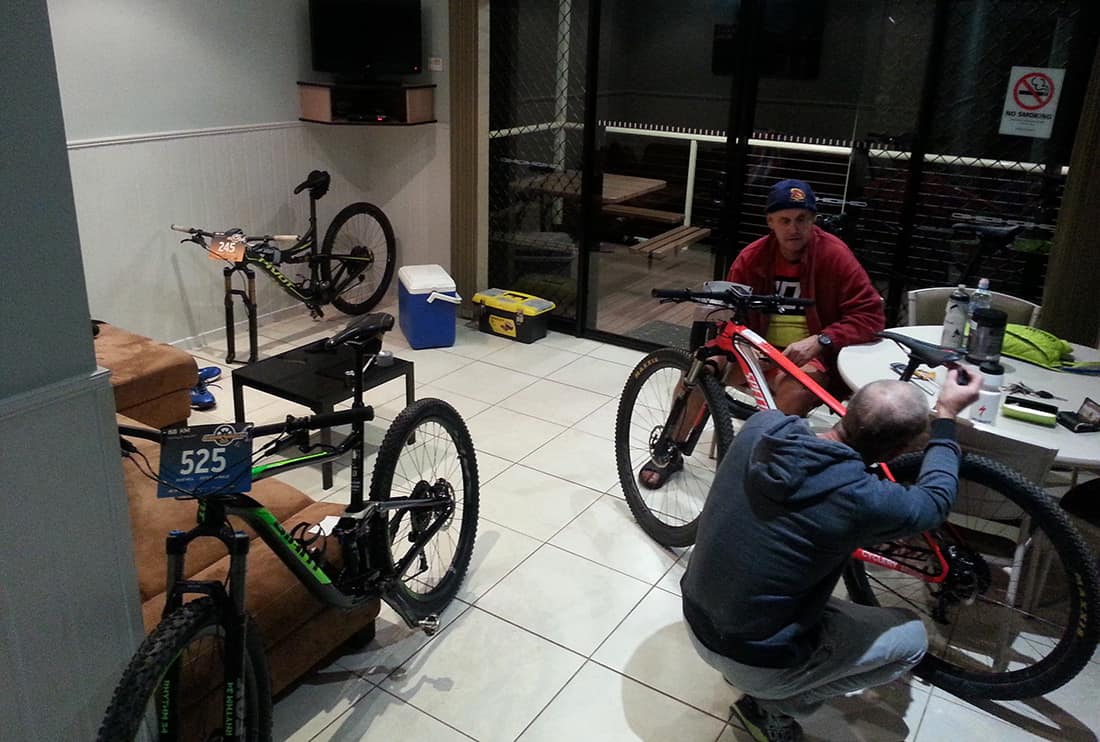 Getting ready the night before. Last minute checks and nervous energy! Pic:©Sean Hill 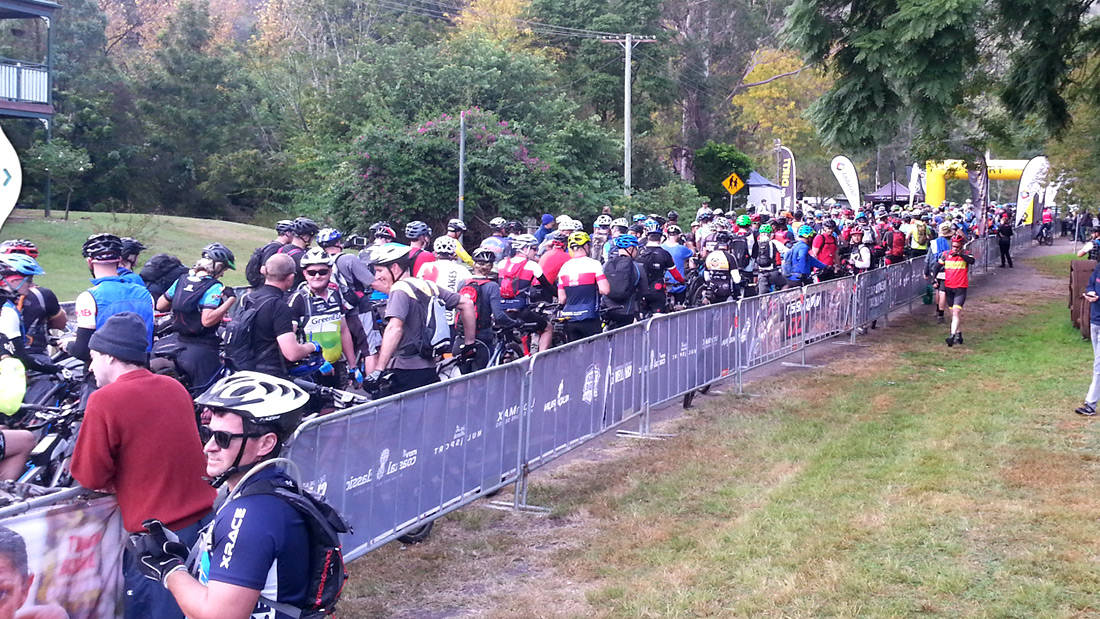 Lining up to start the 68km! Pic:©Sean Hill 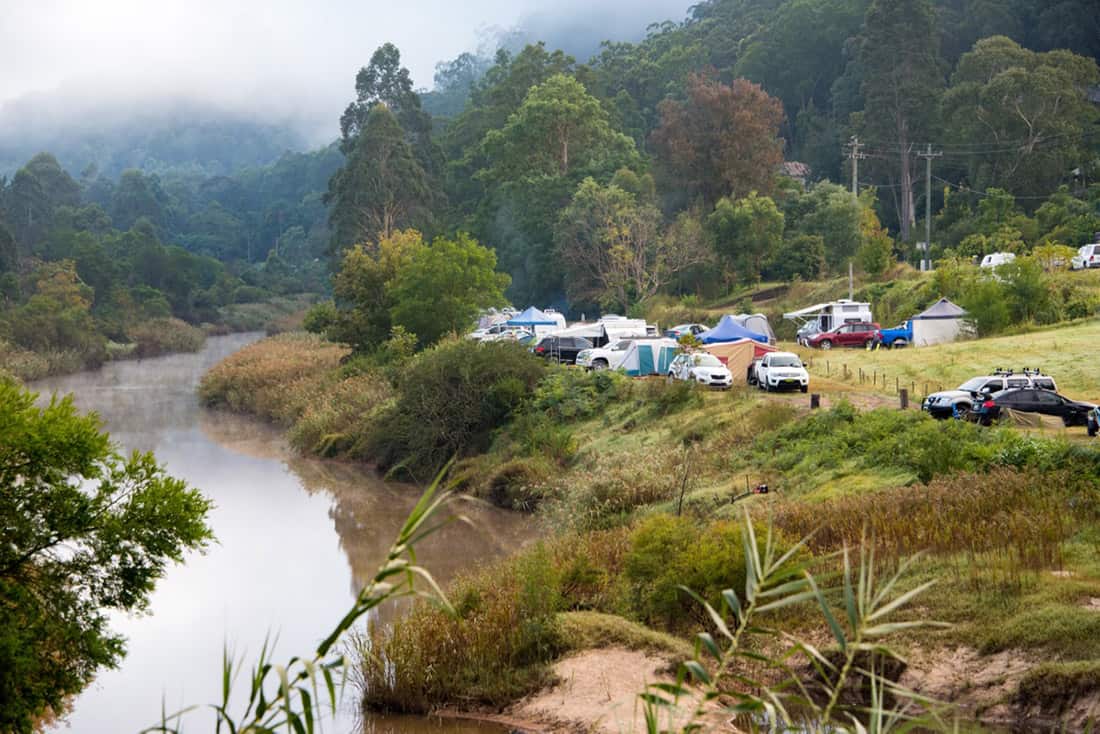 A beautiful place for a mountain bike race. Pic:©Sam Moorhouse 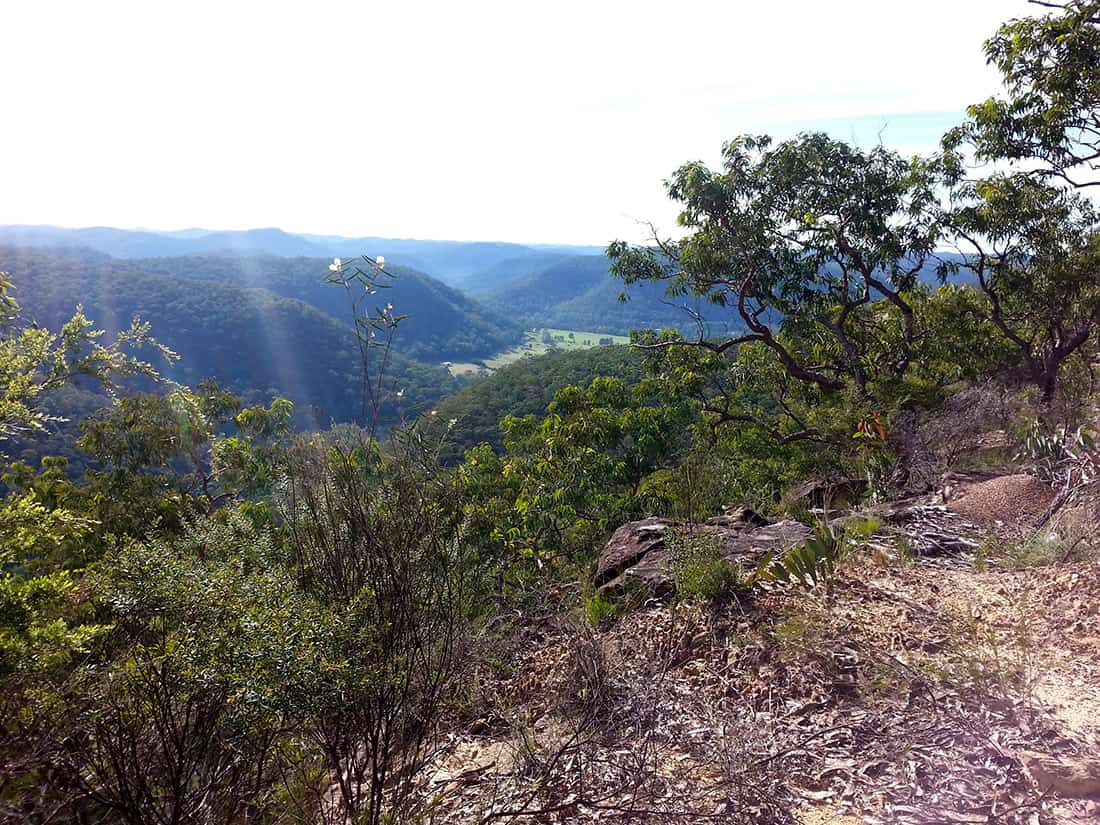 Views of the McDonald River Valley in the first section of the race. Pic:©Sean Hill

I rode over to the start and joined the pack. The pre race briefing over and it was time to start. The first wave (lycra clad speedsters) took off, and the second wave (baggy pants more prevalent, but still quickish) followed not long after, with me towards the back.

The first 5 kilometers follow the gravel road up the valley of the McDonald river. About 1km in I was climbing a small hill and saw a rider on the side of the road with his rear wheel off. Lots of riders had gone past already, so I called out “you right mate?” He answered with a very dejected “not really”, so I pulled over to see if I could help. He’d gotten a nail through his tyre that the sealant had no chance of plugging, and his spare tube had a hole in it too.

I had some patches and a decent pump (he was using C02), but the sealant on the tube prevented them from sticking. The poor bugger managed to get a lift back into town from a local and I’m pretty sure he was out of the race. It was while I was helping that the 3rd and final wave of 68km riders went past. I said good luck to the rider and set off, officially in last place! 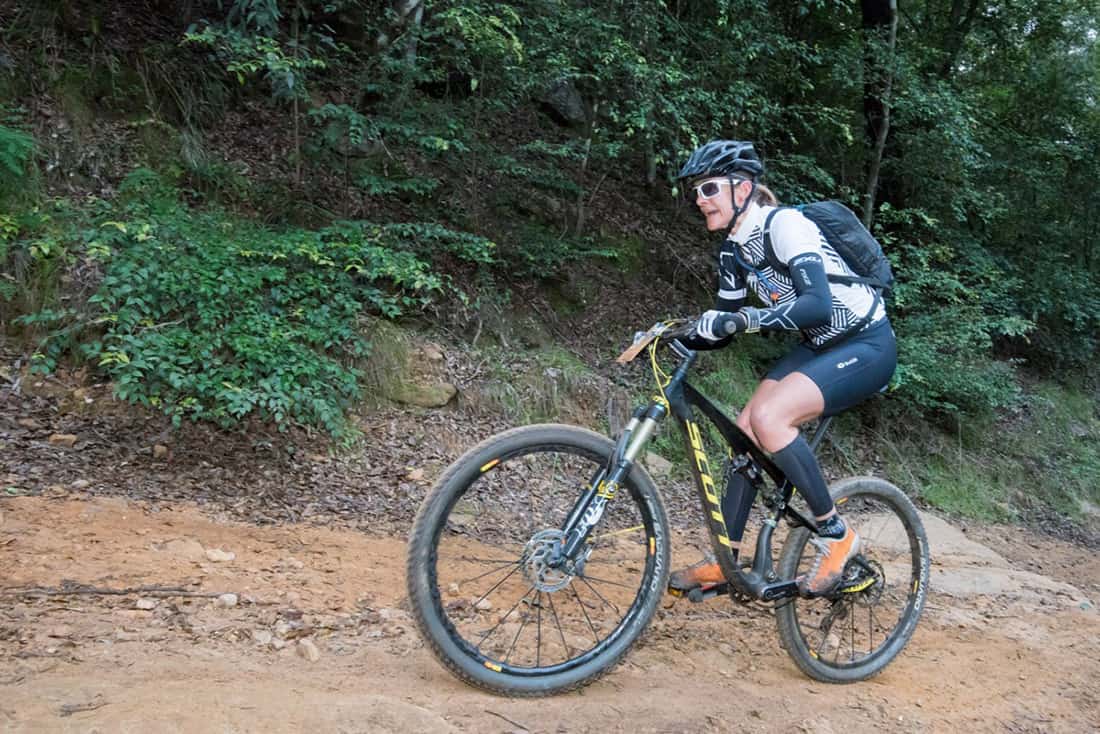 There are some tough climbs in the race. Pic:©Sam Moorhouse

It was an interesting place to be in. I figured that I’d lost around 10 minutes on the side of the road and I actually felt pretty good about it – I didn’t have to try to keep up with anyone now, rather I’d just see who I might catch up to and go past as the race progressed. A creek crossing with the bike on the shoulders and not long after the start of Jacks track and the first serious climb of the race beckoned.

People I’d spoken to before the race said most people walk up the worst of Jacks track – I can understand why, the steepest pinch climbs around 160m in just 1.7km. There’s parts where the dirt has been concreted over and your shoes struggle to find traction. It was here that I started to catch up with my fellow riders as we all slipped and puffed to the top of the fireroad.

It’s not just about the race. It’s also about the location. Pic:©Sam Moorhouse

A Kayak Bridge Over Troubled Water

Once we’d topped out, the trail undulated along the ridgetops with some fantastic views down to the valley we’d climbed out of, until a steep hairpin descent on pea gravel led back to the asphalt. A few kilometres on the flats to give the legs a rest and the 33km feed station appeared. Top up the water bottle, add an electrolyte tab and grab a piece of delicious cake before the next challenge – the infamous kayak bridge, a convict institution.

On paper, and in pictures it’s much less intimidating than in previous years – it’s 4 planks wide whereas it used to be 2. I think a lot more people would walk it when it was narrower, resulting in delays to cross. It’s a steep drop down the sandy embankment onto the wobbly structure. Head down and don’t stop pedalling, with a kick up on the other side.

The slight chance of falling in made it the more fun! It was here the 44km riders turned left to head back to St Albans, the rest of us turned right. I half jokingly called to one of the race marshalls “can I go that way?”, pointing left. She laughed and replied “you don’t want to do that”… 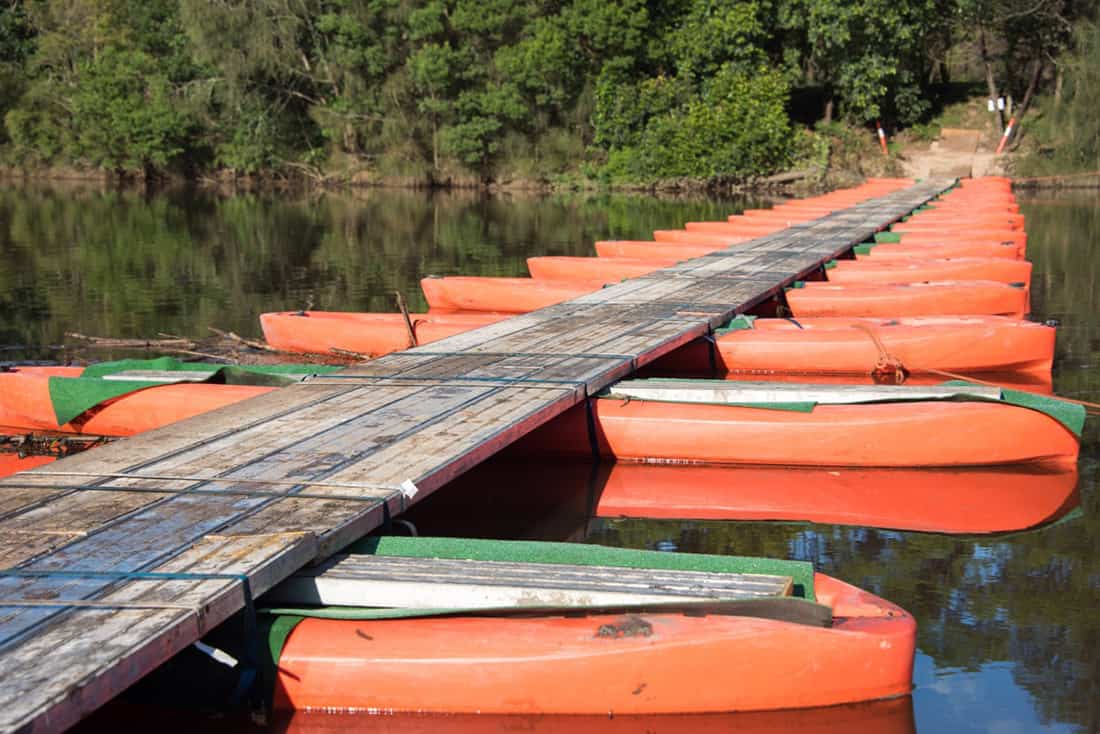 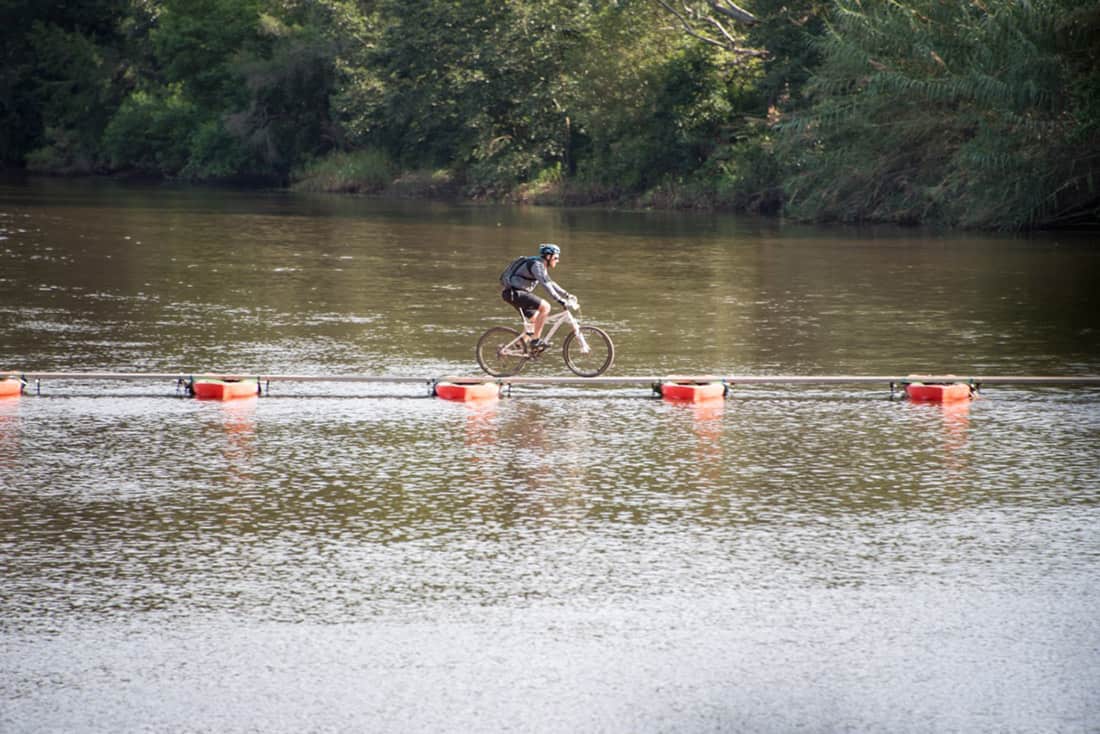 A Race and Historical Tour In One

A short stretch of road and the next climb beckoned – Shepherds Gully, a nice 2km, 150m climb through shady forest. It wasn’t a particularly hard climb, but being at the halfway point the legs were feeling every metre. I chose one gear less than I normally would and pushed to the top.

It was here the race joined the route of the old Great North Road, constructed by convict labour between 1825 and 1836 as the first route between Sydney and the Hunter Valley. You could see evidence of the building works in parts with old box drains and cuttings on the side of the trail – it was actually quite awesome to see a bit of history while racing. 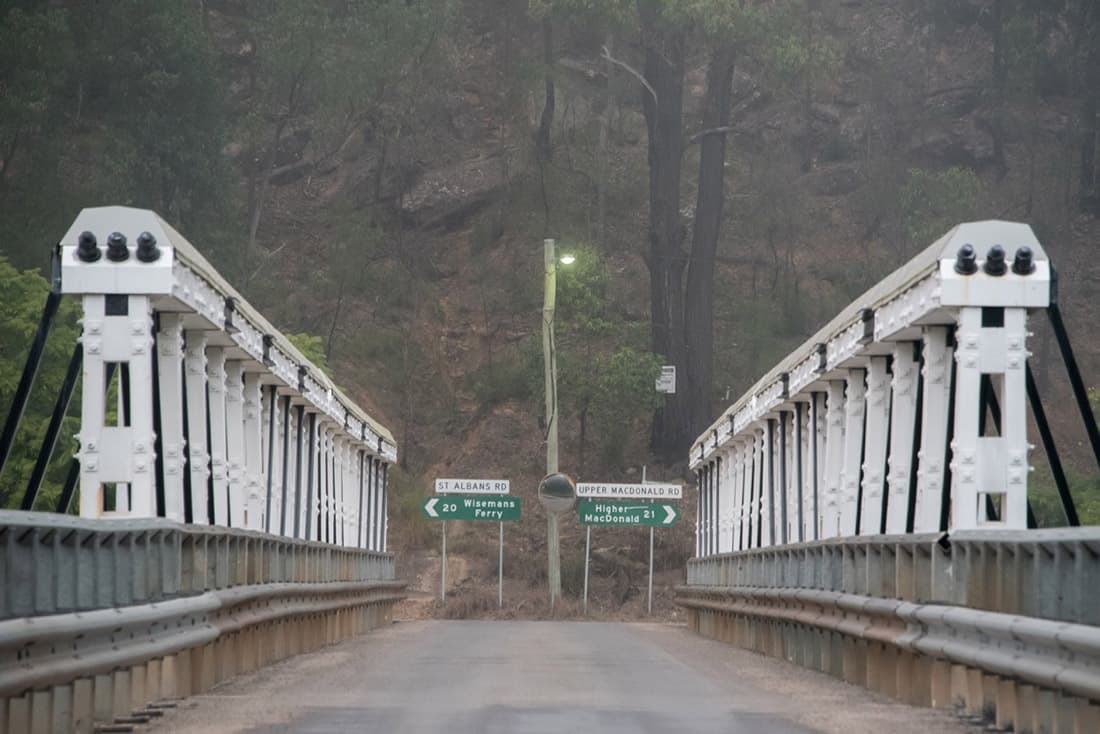 The The historical aspects of St.Albans makes for an interesting race location. Pic:©Sam Moorhouse

The “road” narrowed quickly and I’d even go so far as to say it turned into singletrack for some long stretches – this was a pleasant surprise as I really didn’t expect this. I’d been told there was singletrack, but it wasn’t much and it was more like overgrown fire trail. True, it was that, but it was damn fun to ride!

It was also very technical for long stretches, with extensive rock gardens to climb and descend. Line choice was critical with some ending in drop offs, or kicking up in a way that your legs would protest against in no uncertain terms – there was more than on rider here on the side of the trail dealing with cramping in their own ways.

I saw one guy pulled over punching his thighs, while most were resorting to less violent tactics like stretching. I had a few twinges around the 45km mark as I seem to always do, but I grit my teeth and rode it out. I had a small off when a rider stopped dead on a tricky rock shelf in front of me – a sore hip but I was otherwise ok. The trail widened and left the rock gardens behind. 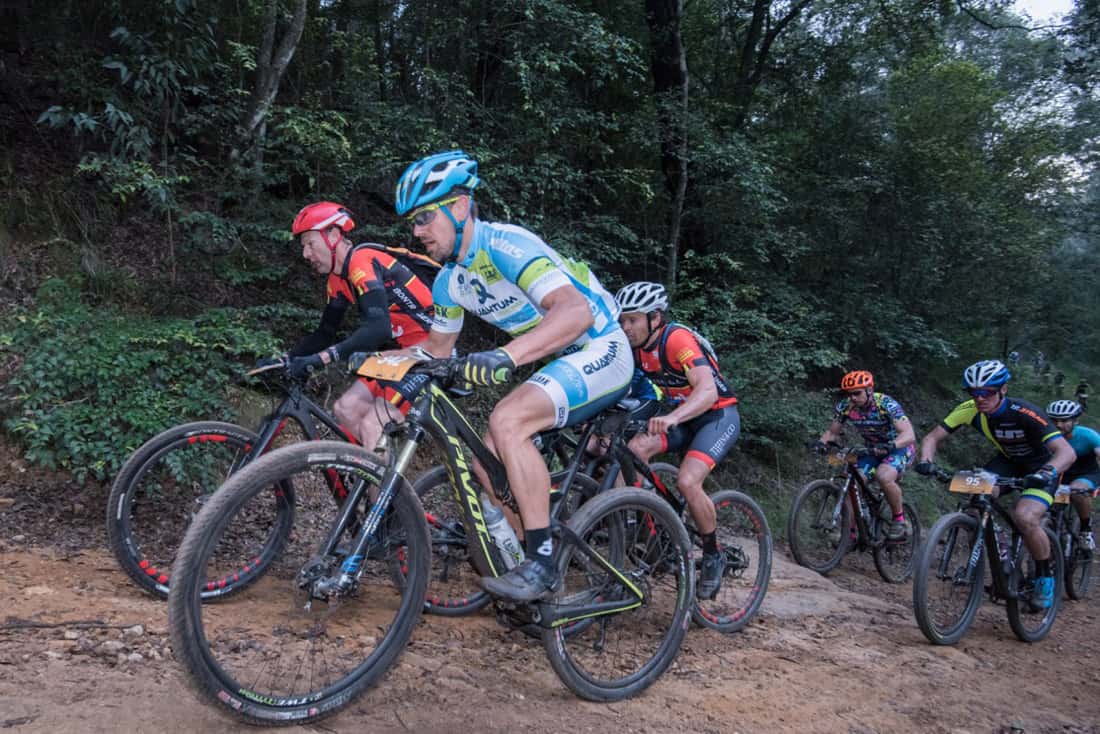 It climbed in fits and starts until the 48km feed station appeared, another split in the race where the 100km riders turned right while we knew left was almost all downhill from here. The trail started to descend, and to say it was rough was an understatement! The track was littered with baby head sized rocks, erosion gullys and deep sand. While the previous rock gardens were mostly traversed at slower speeds, this was definitely more interesting with some speed added to the equation.

The dropper post on the Anthem came into its own in this section – it’s so much better to be able to easily move the bike underneath you and get over the back wheel when it gets steep. The final drop to the valley via Blue Hill was a screamer – rocky at the top, then what almost felt vertical in places before flattening out onto the valley floor. A short ride through private property and the route joined Wrights creek road for the 13km slog back to St Albans.

I settled into the saddle and found a nice pace to ride at – I averaged about 23km/h along this section. Not bad after almost 60km and 1200m or so of climbing for me, though you always feel slow when a couple of the 100km elite riders come barrelling past around the 30km/h mark. A few climbs added to the end of race fatigue, but eventually the outskirts of St Albans appeared and the road switched to asphalt (no more corrugations!)

A final push and I crossed the line. We all were handed a token for a complimentary 4 pines beer – it, like all post race beers was the best beer I’ve ever had! I found a few people I knew (and a few I didn’t) and swapped stories – it’s one of the best parts of these events, you’ve all shared something special and whether you’re one of the fastest there, or a weekend warrior – you’ve made it to the end! 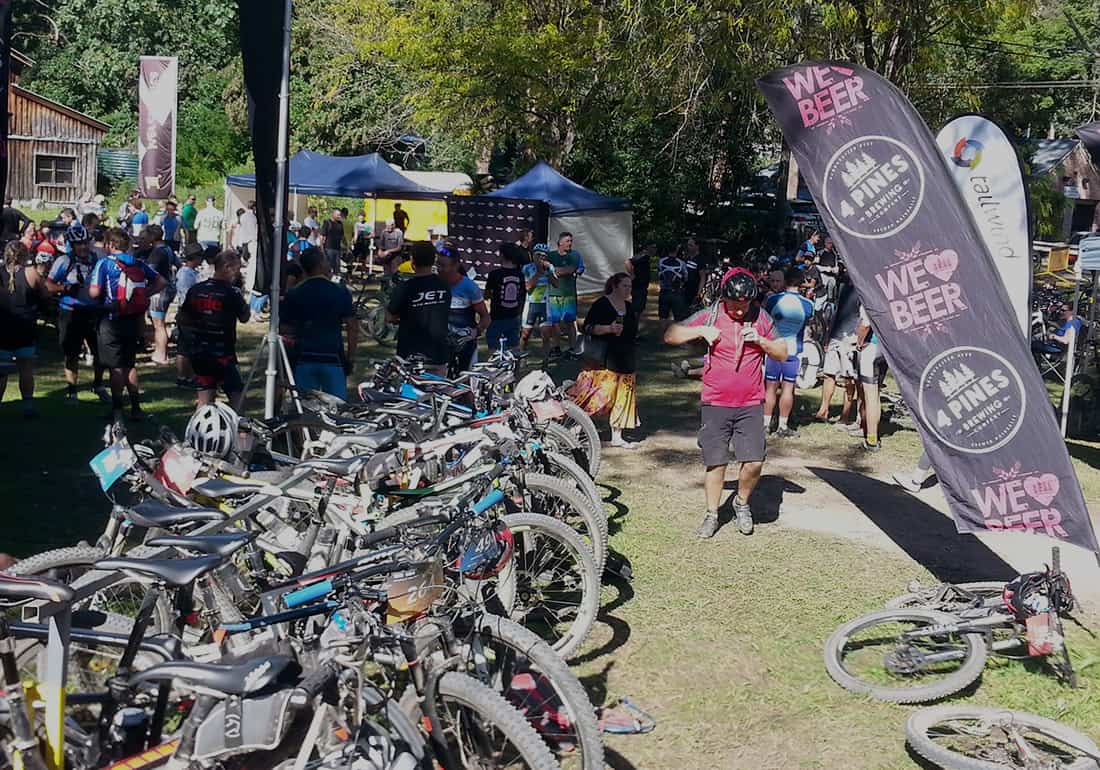 Hanging out after the race – time to stretch tired legs and chill out. Pic:©Sean Hill 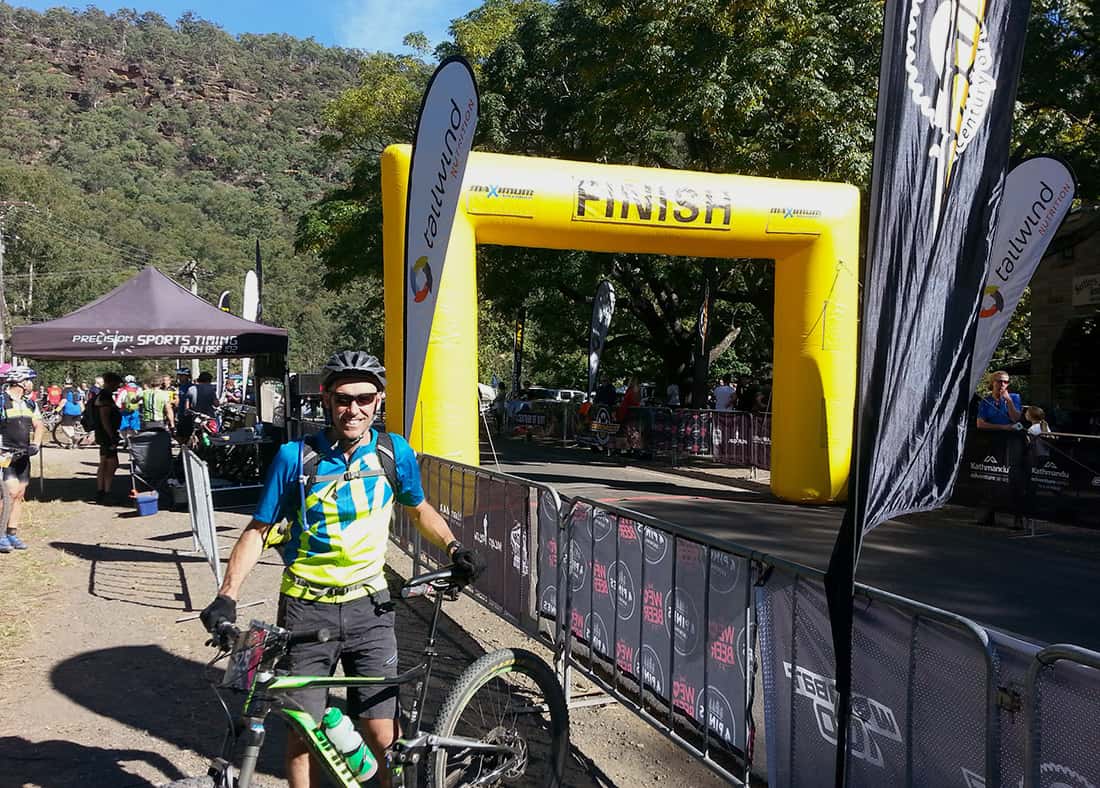 I was pretty happy with how I’d raced. From dead last 1km from the start after helping with another riders mechanical, I’d gotten back to 179th out of 324 riders – 100th from 159 in my category (Veteran!? Males). I’d stopped to take photos, helped someone – for a first time Convict rider, 4h 36min a pretty good result.

I’d gone the distance when the seeds of doubt before the race had me worried, I’d climbed more and ridden further off road than I’d ever done before. I’d seen 190 year old hand built roads and hidden valleys. I can’t wait to come back next year.

Sean Hill started riding far too many years ago on an all rigid Shogun Trailbreaker, when suspension was still a fanciful idea. After a break of quite a few years (more like 10+) due to not bothering to replace his stolen Giant dually, he finally bought another bike 3 years ago and rekindled his love of riding. He also wonders why he didn’t do it ages ago! In between work and family, he spends most of his time riding his local trails at Loftus and Menai.

Keep The Stoke High with The ‘Shred Til...

How The Peaks Of The Kosciuszko Main Range...