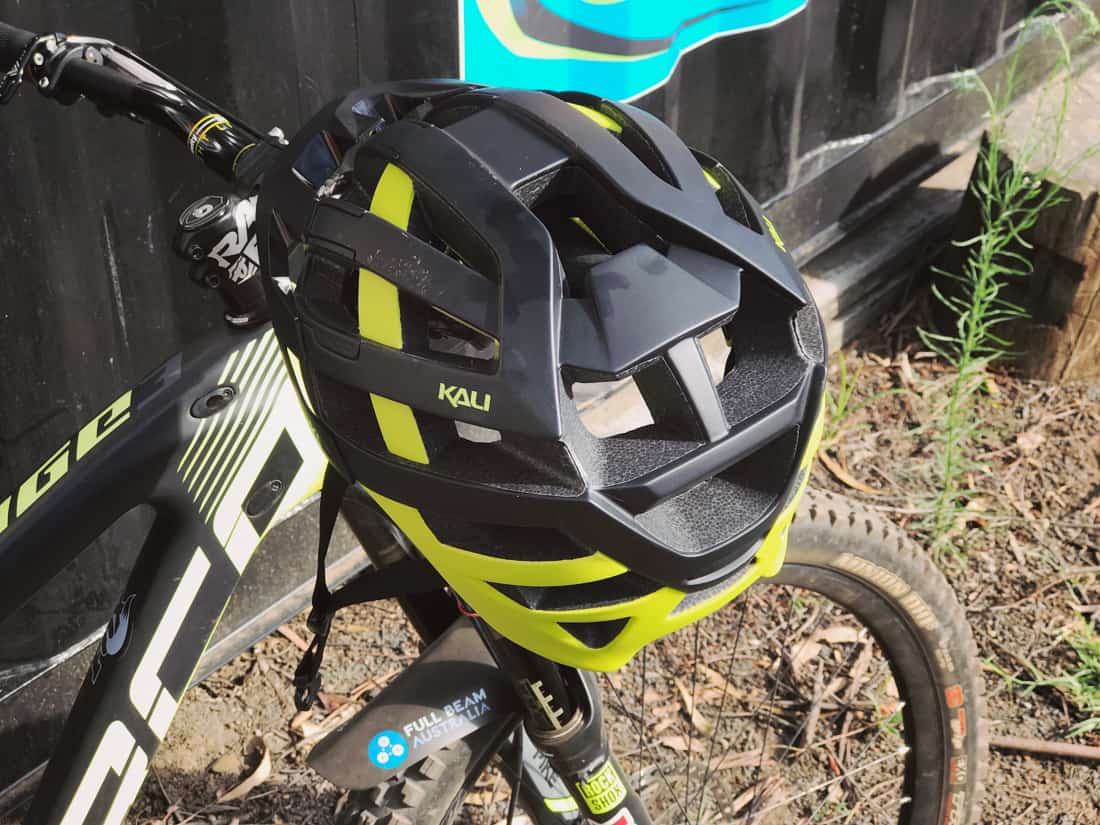 When it comes to purchasing helmets these days, especially for Enduro or Downhill, you want as much protection as you can possibly get.

This kind of thinking brought forth the seemingly standard MIPS, or Multi-directional Impact Protection System, to be introduced into the helmet industry. A majority of helmet manufacturers welcomed this system with open arms, but a few bucked the trend and invented their own system.

One such company is Kali Protectives, with their LDL; or Low Density Layer, combined with the specially designed Composite Fusion or Nano Fusion. LDL is a proprietary design made from the viscoelastic material Armourgel. LDL is designed to absorb both rotational and linear impacts, for both low-G and high-G forces.

Composite Fusion was their initial breakthrough over a decade ago, and Nano Fusion builds on that technology heritage by fusing self-healing foam into key areas of the EPS foam in helmets, making them much safer to wear while staying aesthetically pleasing enough to entice and encourage people to wear helmets.

Kali Protectives sent me their Interceptor and Lunati helmets to test out, and to use for long term protection. In this article, I will be reviewing the Interceptor helmet after several weeks of use. I will revise if necessary in the future after extended use. 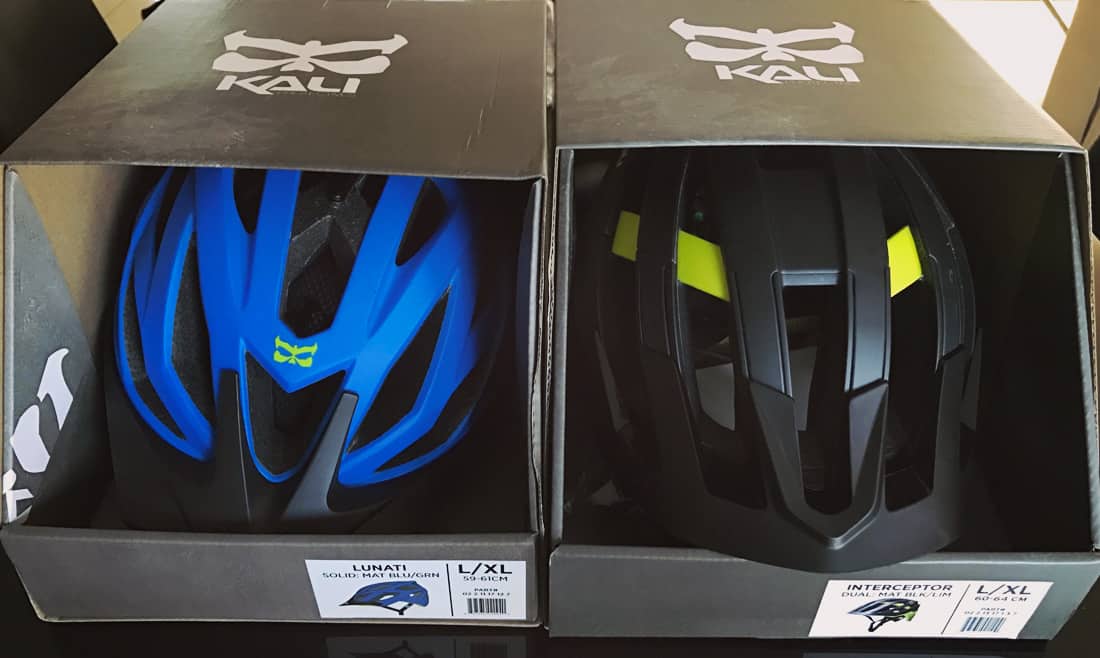 The first thing I noticed when taking it out of the box was just how light the Interceptor is! Coming in at just 390g (13.7 Oz), you really don’t notice the weight so much as having something strapped to your head.

The fit is spot on for my head size, and the padding is quite comfortable despite how thin the foam inserts are. The adjustment wheel is easy to use, even as it gets tighter, unlike some other helmets I’ve experienced, and the strap adjustment buckles are the clip type, locking in to place once you set the desired length.

The best part is, once all of your specific adjustments have been set, you never need to fiddle with them again unless you deem necessary! The mechanisms used don’t vibrate free, which was a pet hate of mine on other products I’ve tested out.

You can literally just pick it up, slap it on, buckle it and ride! Unfortunately though, there is a large portion of the chin straps hanging free after the adjustment. In high wind or high speed situations, this can get a tad distracting as it’s flailing about and hitting you in the face, neck, or ear. I solved this issue with a small rubber band, but it would be nice for an integrated solution. 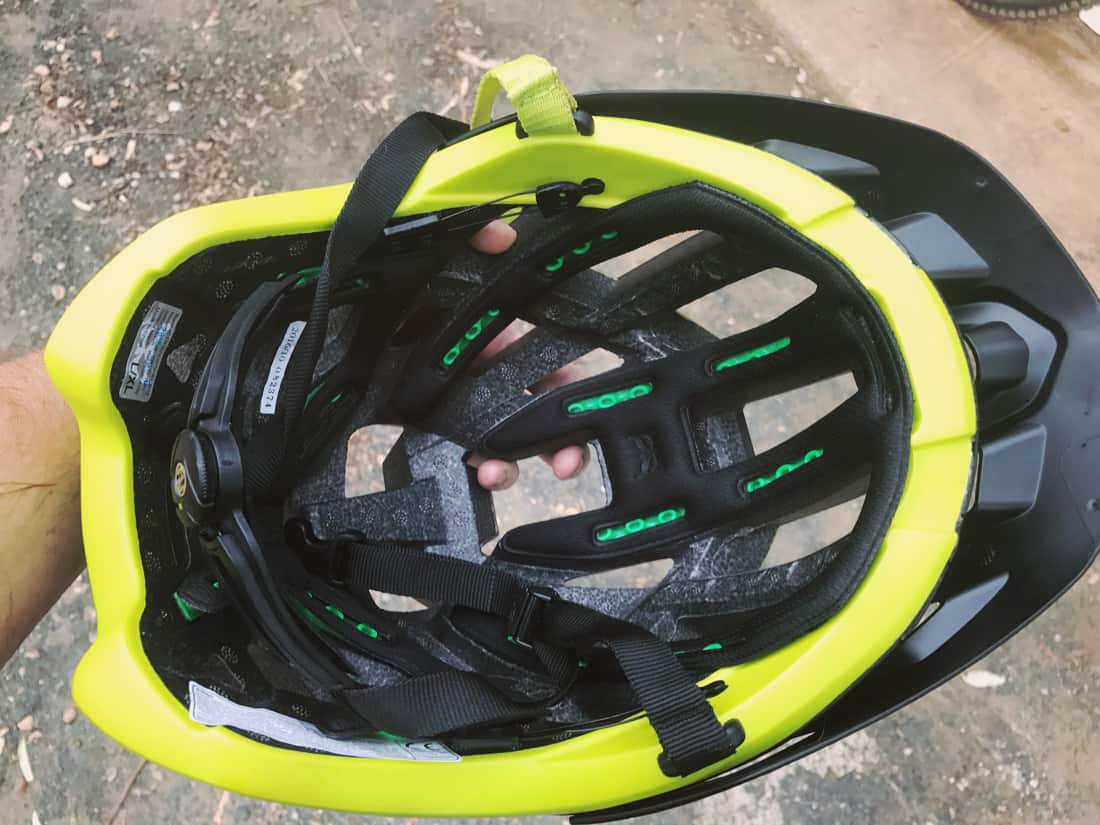 The Interceptor helmet from Kali Protectives, featuring their own version of the MIPS system, the Nano Fusion technology. Pic: Jon Willis

As unfortunate as I am, being one of the riders who require prescription eyewear, it does make a great testing point for making sure that sunglasses aren’t impeded, or that comfortability isn’t sacrificed in order to make it fit. The Interceptor accommodates my glasses happily, while still remaining snug enough to provide a sense of security knowing that it’s not going to come flying off on the dreaded (God forbid) OTB.

Out On The Trails

Thankfully in that regard, I have no real experience since receiving the helmet. The biggest knocks it’s taken so far have been the occasional branch which strayed too far in to the path of my melon. Being a lovely matte black and yellow colour combination (others are available), any scratches or scrapes it has picked up don’t show unless being closely inspected.

Kali Protectives have been quite generous with the ventilation on the Interceptor, sporting a cool 24 vents! Even during the heatwaves we were experiencing in Australia, my head felt quite comfortably cooled, which often ends up being the deciding factor when choosing my helmets. Being marketed at Trail and Enduro riders, keeping the heat down while still offering the necessary protection was paramount. 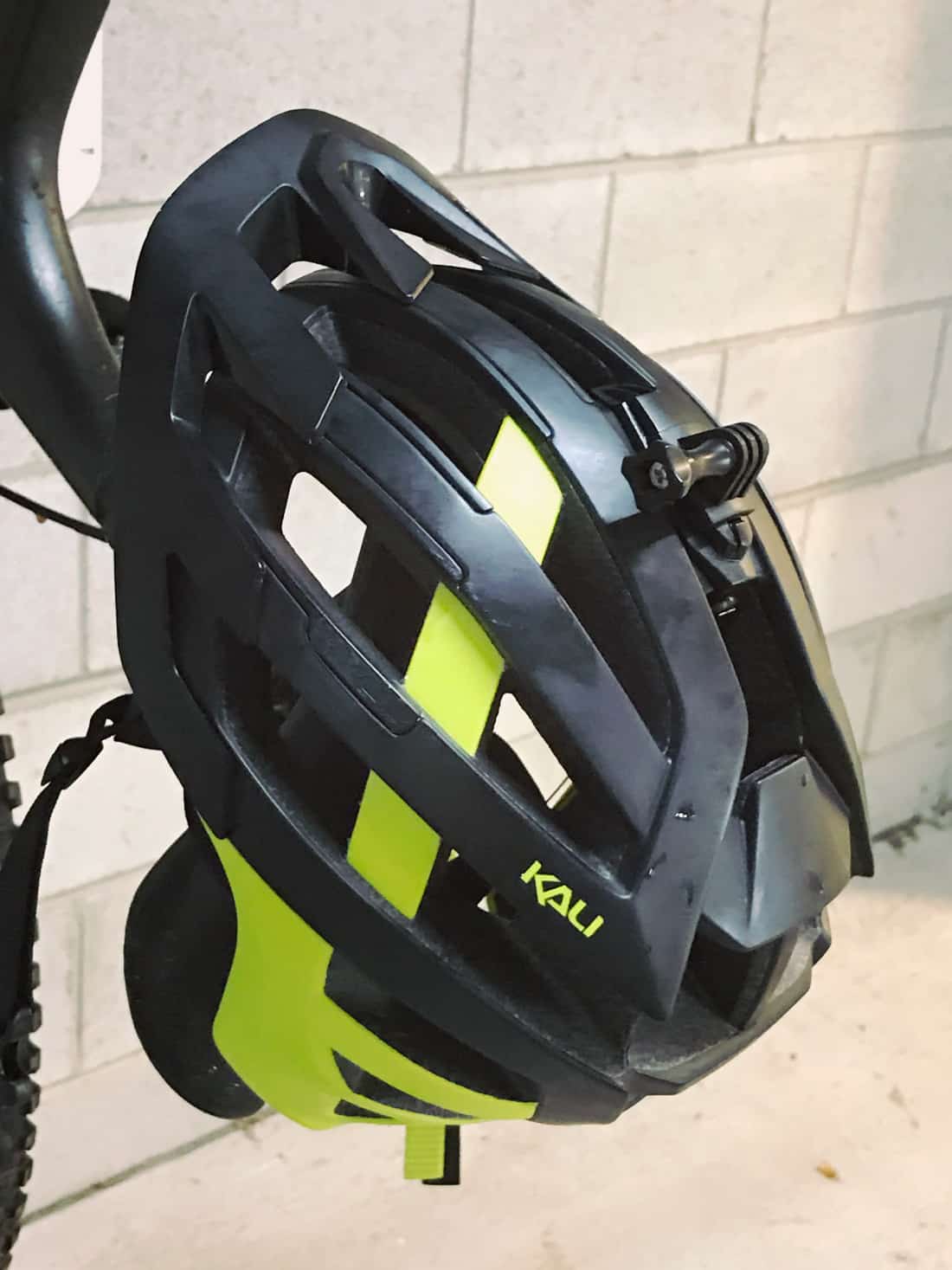 The light/camera mount is designed to just break away in a crash situation. Pic: Jon Willis

The Interceptor also comes with a breakaway action camera/light mount, which is a fantastic idea! Integrating these into the helmets means there are possibly less issues later on, especially if you have an Over the Bars moment and land on the camera or light! It’s extremely easy to attach, clipping to a designated portion of the helmet, and being held in place by a rubber O-Ring. This prevents it from shaking itself loose while riding down the trails, and does a great job of reducing vibration that normally comes from clip on additions.

You can definitely feel the weight on your head though, as my Garmin Ultra 30 weighs around 160g with the waterproof case. It is positioned relatively centred on your head however, so the weight isn’t focused on one particular point of your head. 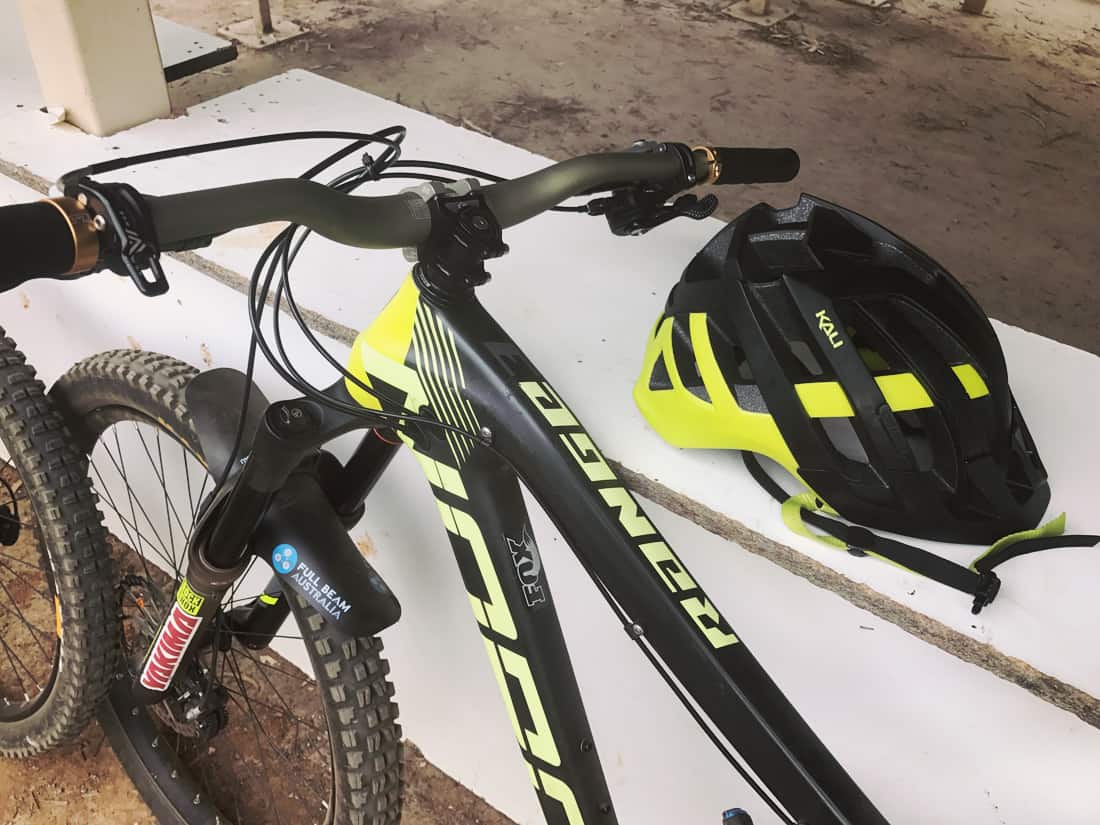 Usually with things like helmets, there is a trade-off between aesthetics, comfortability, function, and protection. With a helmet like the Interceptor, you can imagine that both Protection and Function are high on the list, comfortability coming in around the middle, and aesthetics receiving a bare minimum of attention. In this case however, it’s a full spread!

It looks great, both on and off the head, and is extremely comfortable to wear for long periods! I’ve had multiple sessions of 3+ hour long rides without any of the usual niggly complaints, and with so many vents to choose from, the inevitable head itch is reachable without much issue.

The Kali Protectives Interceptor comes with the required CPSC 1203 and CE EN 1078 ratings for the US and European markets. I reached out to the Kali Protectives team to try and find out if they were also pursuing the AS/NZS 2063:2008, as this is a requirement for racing in Australia under the MTBA, and have received word that while it is rated under that standard, it isn’t packed as that yet while they are looking for an Australian Distributor. I will edit this article in future if I receive any updates on this.

Overall, there was very little I could find fault with. Aside from the integrated mount (which could be an issue with the sample I received) and the leftover strap swinging in the breeze, I rate this very highly! It has become my go to helmet when leaving the house for some Enduro/Trail work, and has even become my helmet of choice when commuting.

I highly recommend this as a purchase consideration, and send my infinite thanks out to the team at Kali Protectives for giving me the chance to review it! Thumbs up guys!

Could Outdoor Adventure be a Treatment for Autism?

Stop That Dancing Monkey On Your Back!