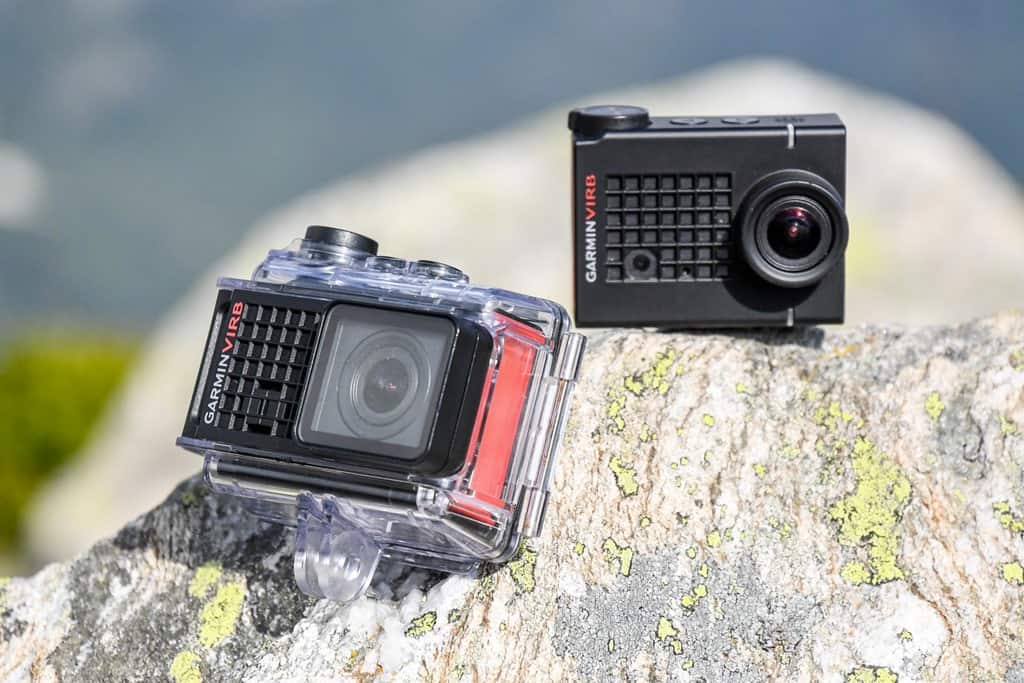 The world of action cameras is rife with options, excellence and imitations. Undeniably, a few certain brands stand well above the rest, and occasionally we glimpse an unexpected contender.

The Garmin VIRB Ultra 30 is definitely not unexpected, but still delivers astounding results! From the complete redesign over the previous VIRB iterations, to the addition of new features, it is an excellent camera that deserves every iota of attention and praise.

I have previously lamented the lack of 4K UHD recording in the VIRB XE. Garmin appears to have either noticed and included the 4K 30fps option to its’ plethora of recording modes. Alongside the UHD resolution, there is everything from 2.7K 60fps to 480p 300fps. 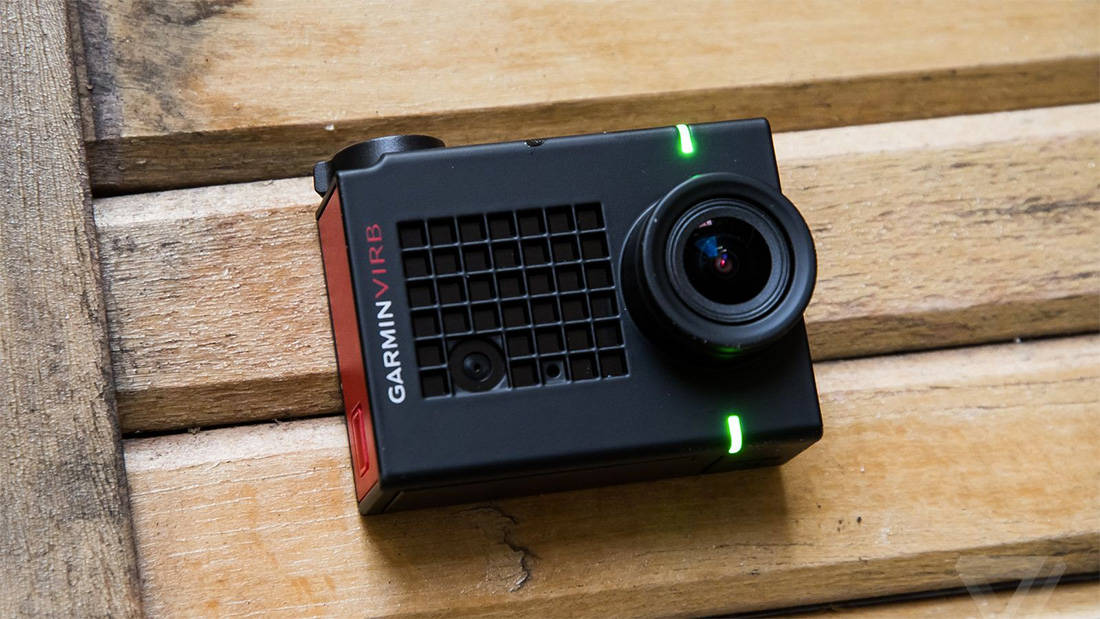 Garmin have also included an Expansive View, which widens the recording area, allowing for more to fit into the frame. Expansive works for both widescreen, and for a Tall view. Time–Lapse and Travelapse are available too, from 4K to 1080p and are locked at 30fps.

With a regular time-lapse the camera is triggered at a set time interval (i.e. every 1 second). But in travelapse mode, it’s triggered using the GPS based on a distance interval – such as every .1KM, or anything you want. Each mode can be quickly chosen and changed using the Ultra 30’s great touchscreen. 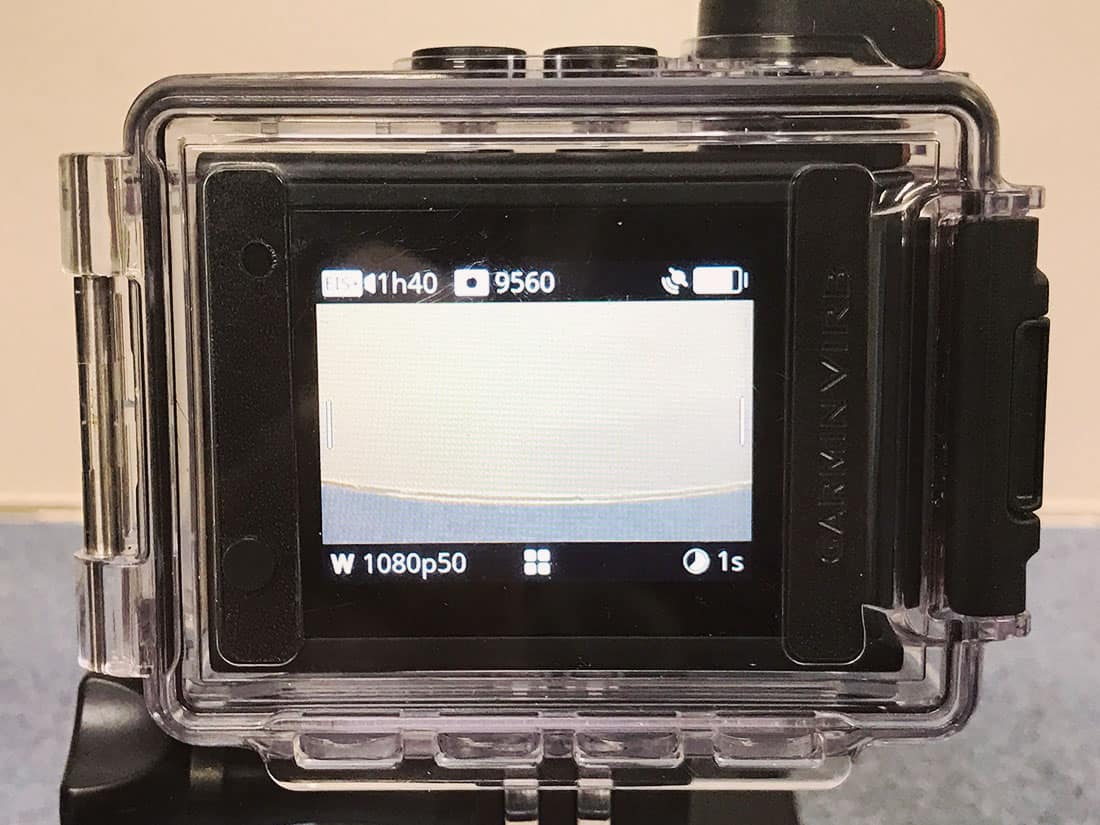 Pro Modes are available also, and expect the usual settings availability, as well as new High Bitrate and Exposure Lock options. People who are obsessed with quality will be extremely happy with the inclusion of those two! 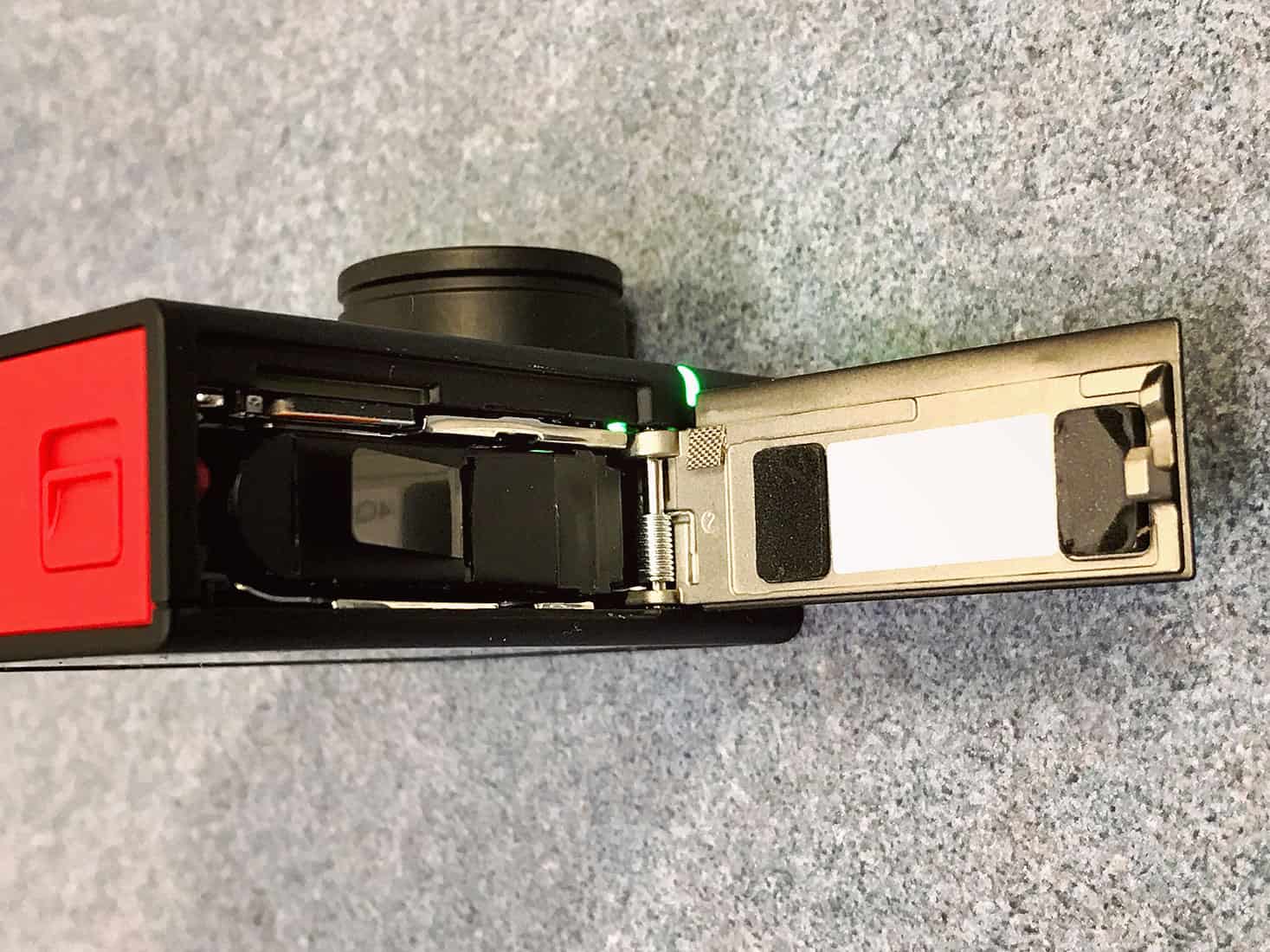 For Photo modes, we have Single, Burst and Time–lapse. These are fairly self-explanatory, but there are some included extras that the previous iterations didn’t feature.

Exposure modes selectable for Photos are Standard, Night, and Bracket. 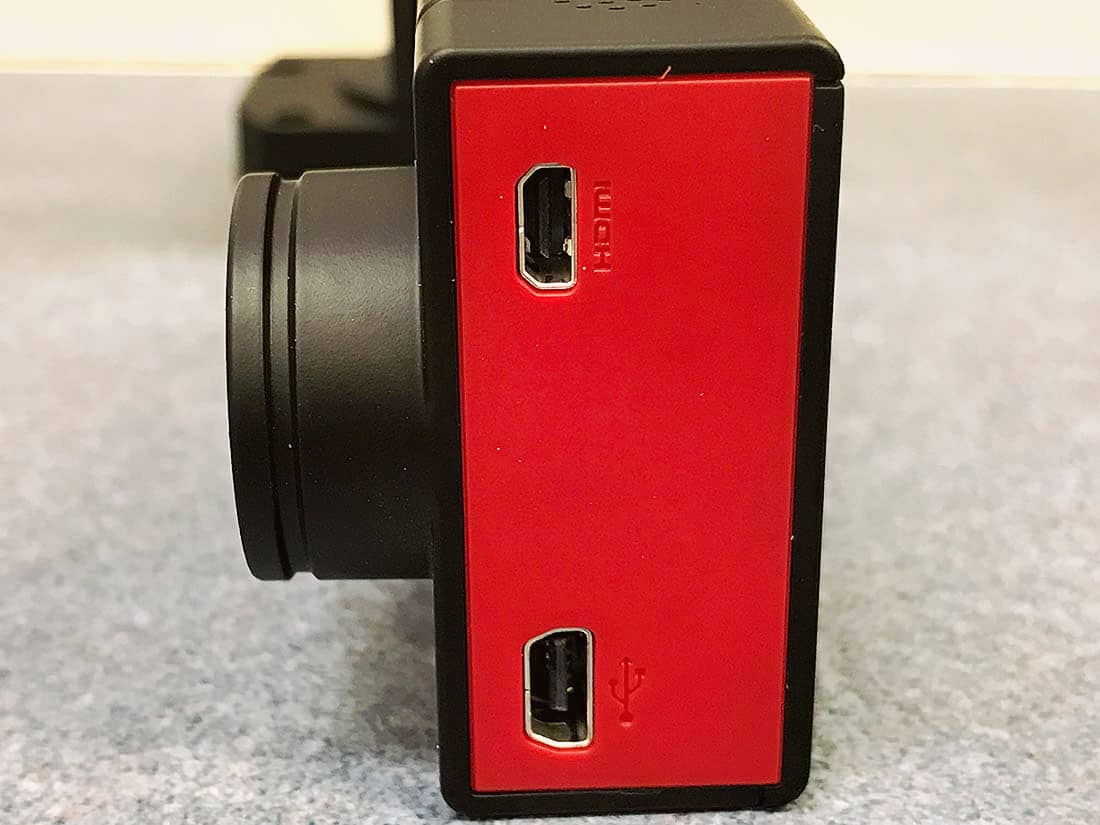 With the Ultra 30, Garmin have chosen to do away with the unibody design, instead opting for a waterproof case and removable camera. This may be due to the redesigned microphone and touchscreen, but either way I’m not complaining.

Removing the camera from the case is very simple, with their locking latch system the easiest one I’ve had to work with yet!

This is a very good thing, because unlike the XE, the Ultra 30 must be removed for charging or linking with a computer. 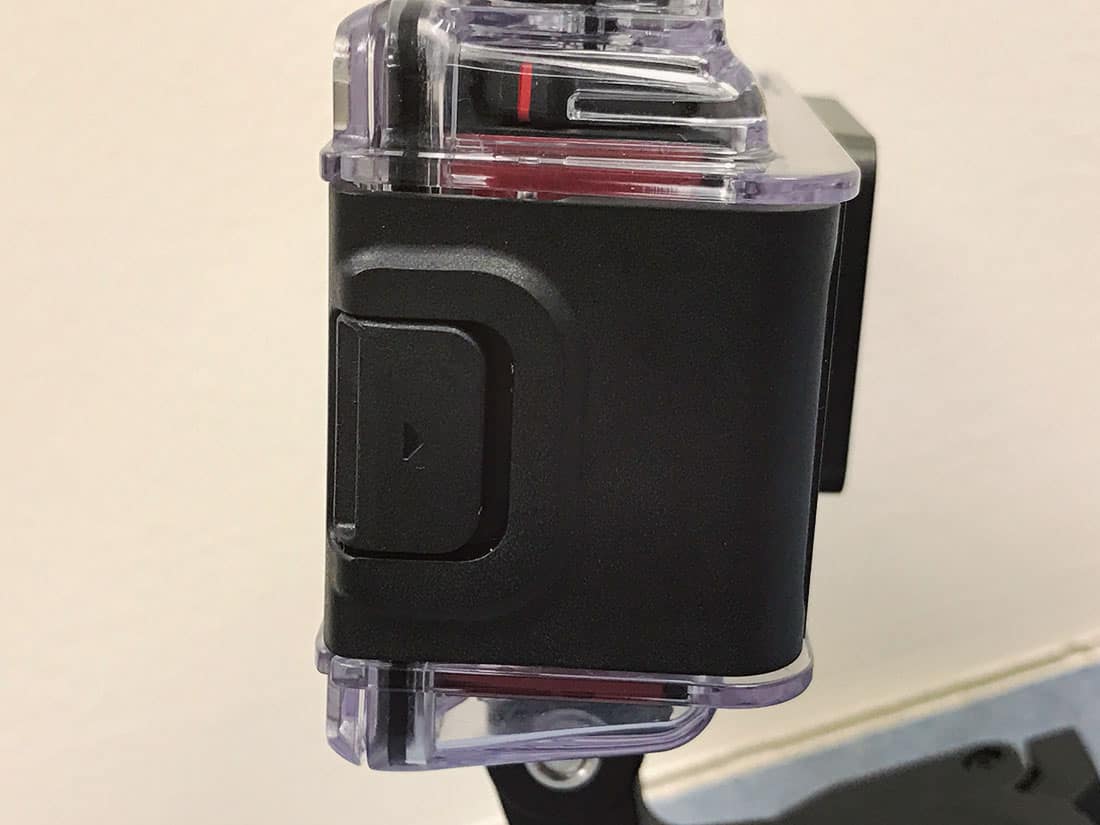 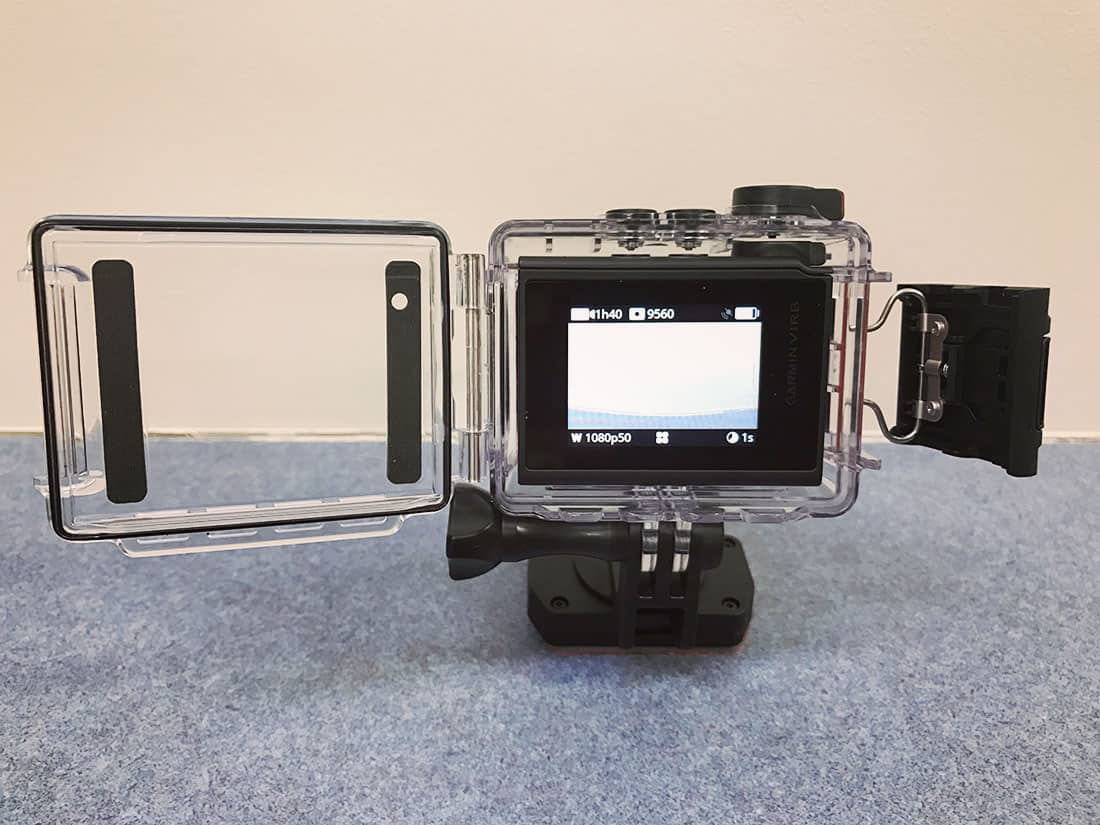 The new waterproof case has some very fancy acoustics engineering applied to it too, because wind noise is practically a thing of the past. It astounded me to no end, when reviewing footage I had recorded while out riding, there was virtually no discernible wind noise, just the sweet sounds of the rear hub spinning or myself running short on breath!

It does raise the issue of picking up the heartbeat of the rider, but as I usually ride with a 3 axis gimbal attached, it’s not a great deal to myself. The Ultra 30 touchscreen also works through the waterproof case, but on mine it gets a little picky. 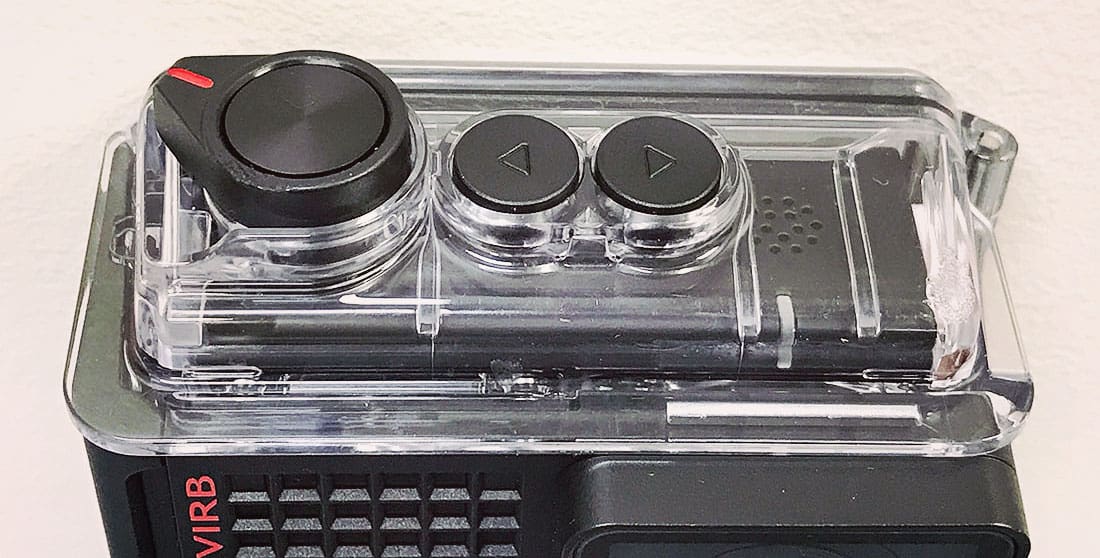 I’ll have to make several attempts for the screen to recognise any input, or it will outright reject my efforts and force me to use the buttons. Thankfully, since you can use the buttons as an alternative it’s not a deal breaker. Again though, this could just be my camera, as I haven’t heard any reports of anyone else’s doing the same.

Garmin have kept their foolproof switch/button system from the old cameras, which is fantastic, because you can tell if it’s recording or not just by feeling it with your hand rather than having to visually determine if it’s on!

To record footage, simply flick the switch. Take a picture, push the button. Easy! The settings menu is incredibly simple to navigate as every option has its own well-defined area. 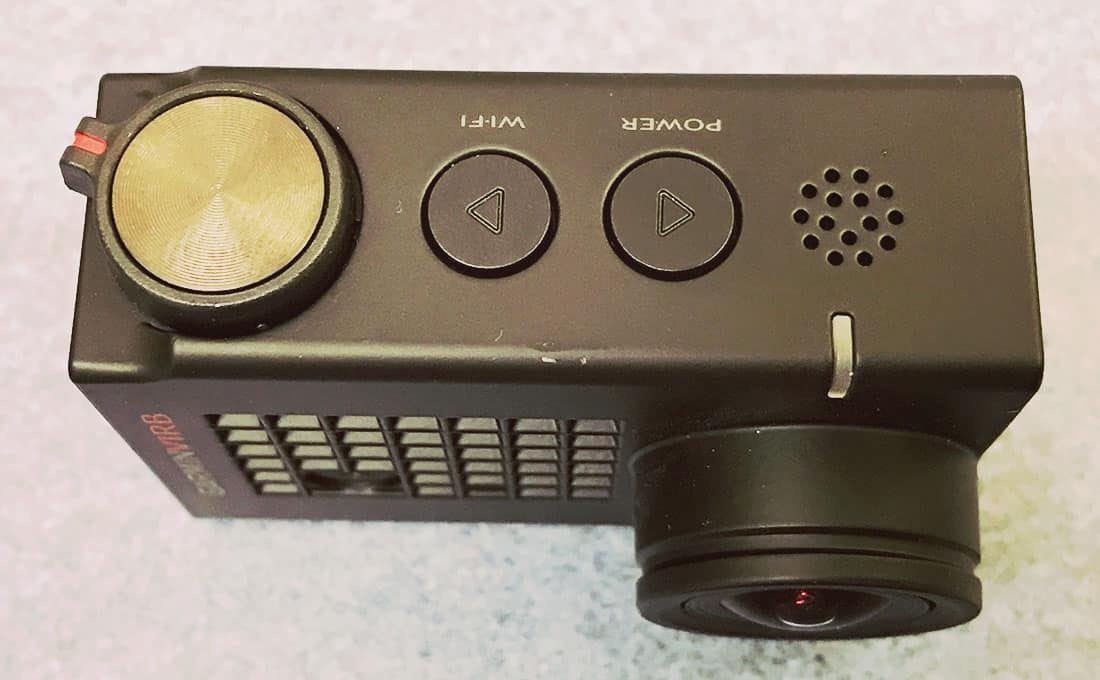 The video quality is better than the last model, with the introduction of the High Bitrate mode, higher resolution recording, and new optics. Pro modes are just as good as ever for anyone who uses post processing in their works, and the standard modes are great for those who just want to cut together a quick edit.

The Ultra 30 also has had an upgrade to the Digital Stabiliser over the XE, now providing 3 axis’s of Electronic Image Stabilisation compared to the 2 axis’s previously. While not the same visual quality of running a gimbal, it does a damn good job of smoothing out bumps and jolts. I recently did a Garmin Parkrun in Brisbane with the Ultra 30 recording throughout, and the resulting footage was remarkably watchable! Just keep in mind that if you wish to run the EIS, you must have the camera set to 1440p 60fps or less. It won’t accept any higher settings. Samples provided below.

Taking still photos is something that action cameras aren’t really known for, but the resulting imagery is quite beautiful, given the right lighting or settings. Being a 12MP camera, it takes a nice large picture to be scaled down later in an editing program of your choice, or to be displayed on a phone or tablet.

With the 12MP setting you can choose a burst mode of 30 shots per second, or at 8MP, 60 shots per second. At those speeds, you certainly won’t miss out on the perfect action snap of a mate sending it deep over a gap, or pitching OTB when he inevitably comes down front heavy! 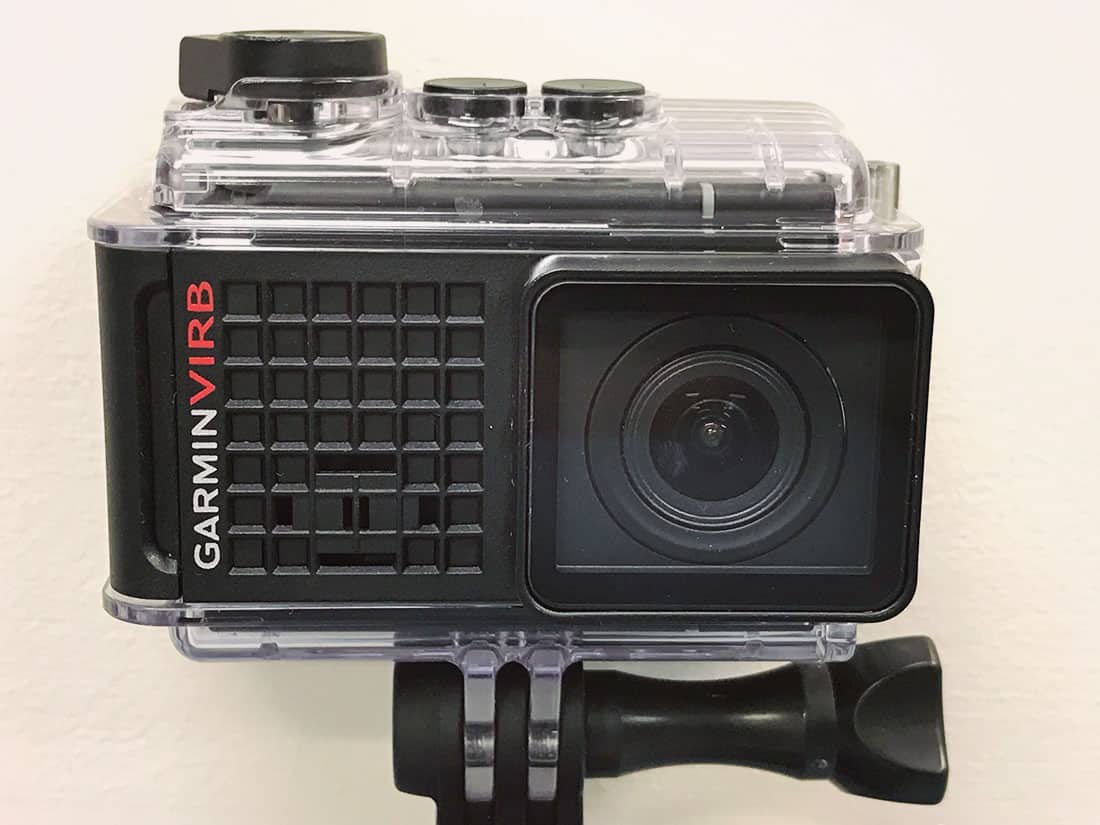 Without Pro Mode the colours are reproduced a little on the vibrant side, but the pictures don’t look washed out, and there is little fading, meaning the end result is quite crisp. With Pro Mode turned on, you can adjust the settings to however you want, and the touchscreen allows you to adjust every little change while viewing your subject, meaning less guesswork!

I’ve used a few of the photos I’ve taken with it on my Instagram page, and scaled down, it’s hard to tell the difference between the camera on my Samsung Galaxy S6 Edge+ or Iphone 7 Plus and the Ultra 30, but my Canon 700D is still my go to dedicated still photo camera. The only thing missing from the Ultra 30 while taking photos is the RAW mode. I’d very much like to be able to tweak the pictures much more than I can, but it’s something I can survive without. 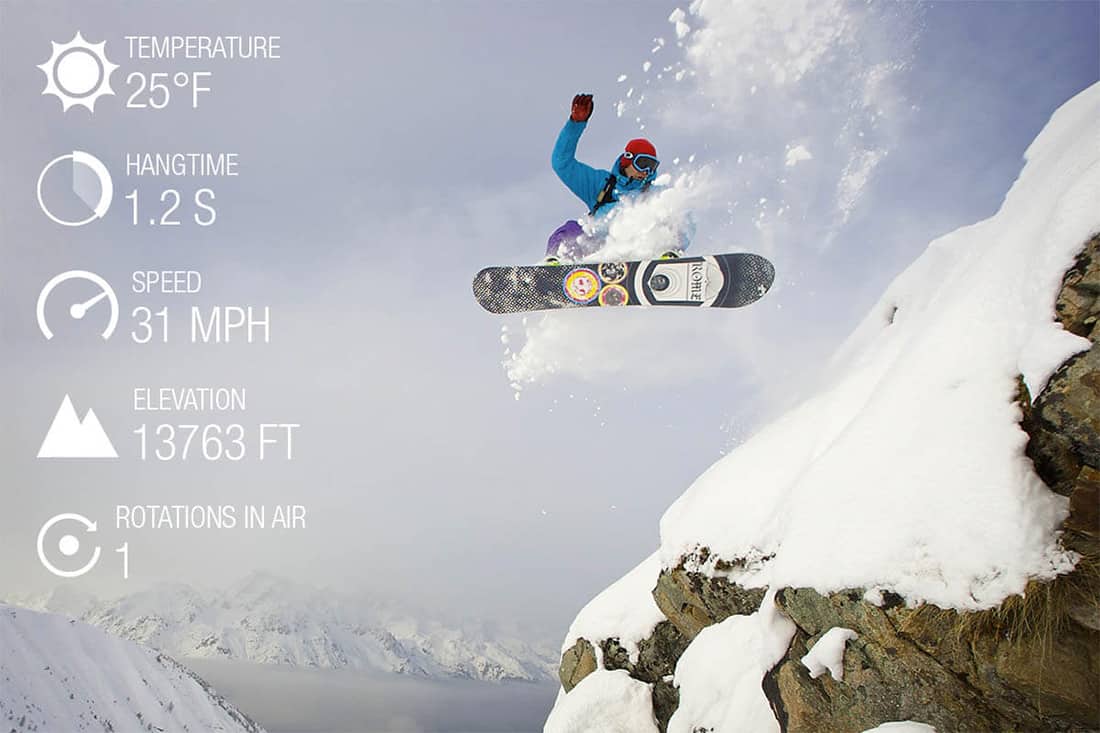 One of the biggest draw cards to the Ultra 30 is the ability to record data (G-Metrix) from the camera itself, and with ANT+ connected sensors. Pic:©Garmin

Adding in the plethora of ANT+ sensors, and the ability to pair Bluetooth devices (microphones for external audio, etc) and you have one hell of a powerful device! 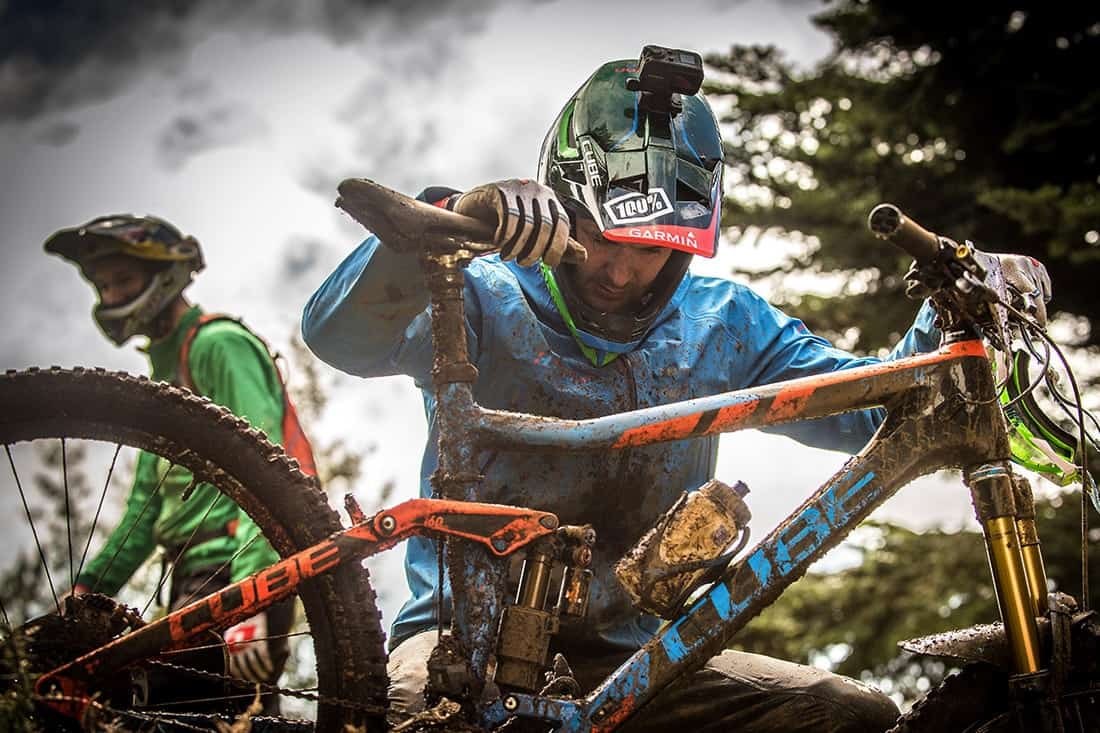 Could it replace the GoPro?  Pic Credit:©Garmin

With the newly updated Garmin Virb App available for both Android and Iphone, controlling the settings remotely is another simple affair. Pair your phone with the Wi-Fi, open the app, and you’re away and running. 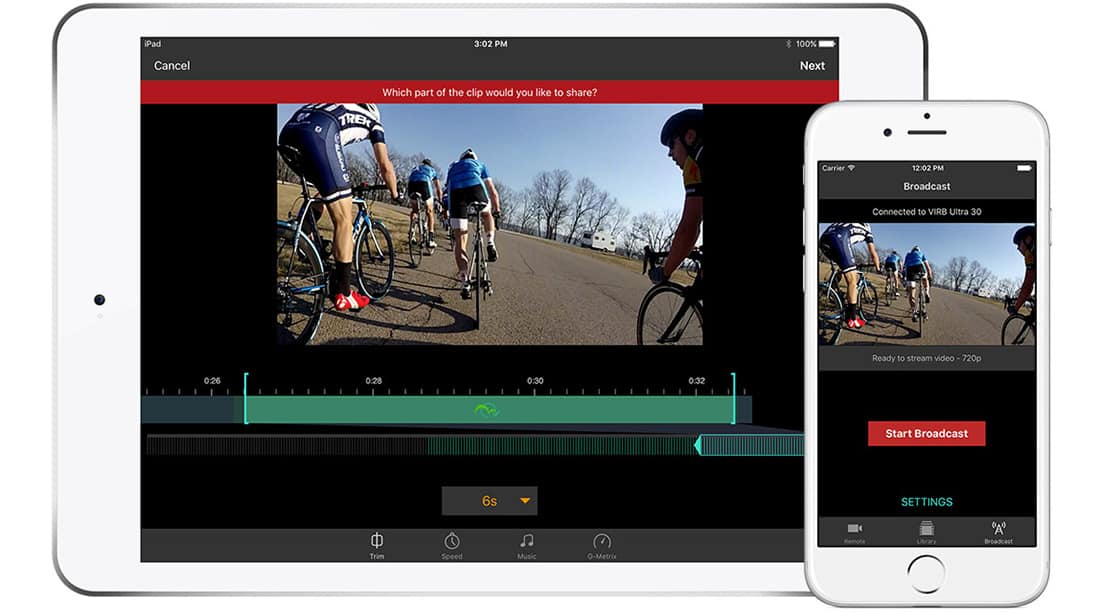 New in this version of the App is the ability to live stream to YouTube Pic: DC Rainmaker

This will give you the standard live view to see where the camera is pointed, allow you to adjust settings, and view recorded files and pictures. You can download the files to your phone from this new version of the app, which makes viewing the files, or uploading them to some form of social media much simpler!

Also new in this version of the App is the ability to live stream to YouTube. This is currently only supported on iOS, and no date for release on Android as of yet. If you do plan on doing this, make sure you’ve got a big data plan, as this can get pricey!

I’ve had a few questions posed to me as to whether I would recommend this over a GoPro Hero 5 Black or Session, to which I would have to answer Yes, undoubtedly and unequivocally. Yes, both cameras share a lot of similar features, but the most glaringly obvious fact is that the GoPro cannot provide the metrics, which are quite an amazing addition to the camera! 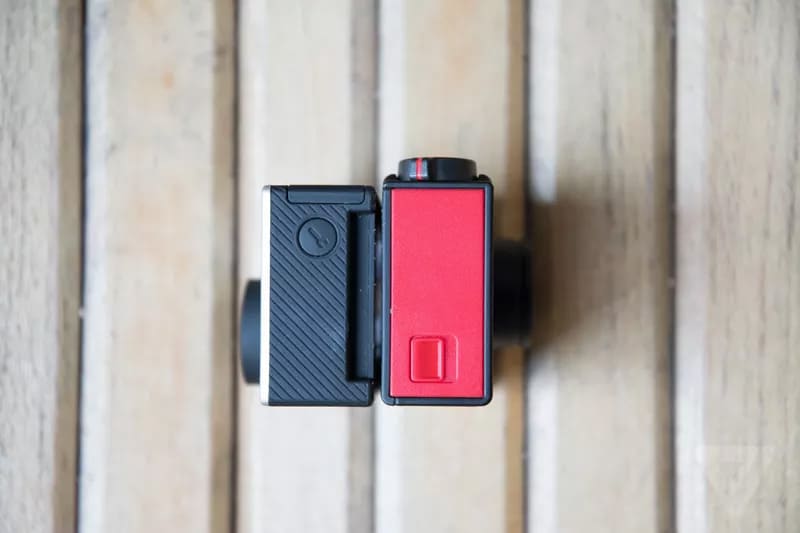 Side by side with the GoPro Hero 4 Pic: The Verge 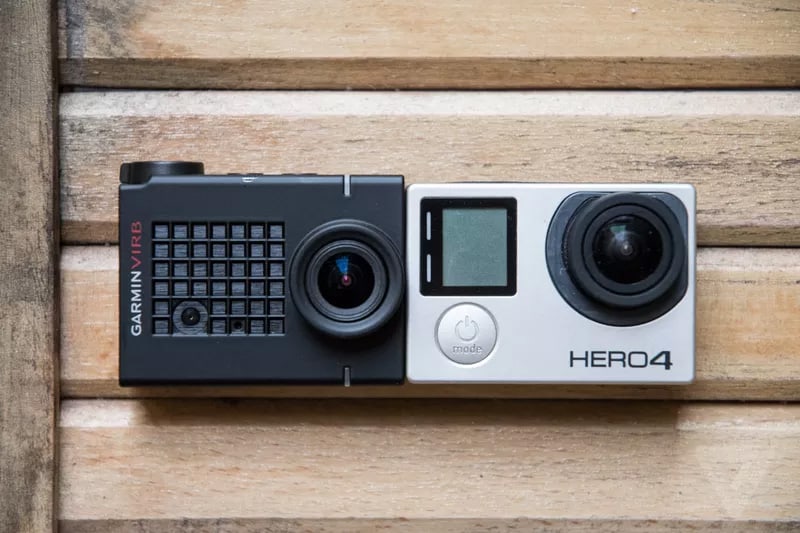 There’s not much in it. Pic: The Verge

The videos which display them make you feel like you’re not just along for the visual ride, but you get a sense of just how hard, how fast, and how fun things can be!

Watch the speedo in the corner, check where the person is on the map, see the amount of hangtime they pulled launching over a 50 foot tabletop…

I’m quite impressed with the Ultra 30 overall, and honestly cannot applaud Garmin enough for such a great camera. Probably my biggest gripe about the Ultra 30 is the fact that there still isn’t any Camera RAW capability in photo mode. Seeing as this really isn’t stopping me from doing anything, or causing any major inconvenience while attempting to use a feature, I’ll chalk this one up as something I dream about!

The Women’s MTB scene Is Looking Better Than Ever

Crankbrothers Have Entered the World of MTB Shoes!

The Right Tools For The Job!