Home Featured Articles Flying With Your Bike: Tips from a Baggage Handler

Flying With Your Bike: Tips from a Baggage Handler

Flying with your bike can be a nerve-wracking experience, particularly if the bike is new and/or you’ve spent a lot of money on it.

Will the bike make it to your destination in one piece? And what’s the best option for keeping your bike safe – soft case, hardshell or cardboard box?

My wife and I are heading back to Wales next year to make the pilgrimage to visit family and fiends, enjoy the endless rainy days and consume our own body weight in tea and biscuits. That’s a little harsh, we love Wales and enjoy heading back each time but we get a bit restless if we don’t ride.

The last time we hired some bikes but it was costly and was only for one day. So, this time we decided to turn it into a little mountain bike holiday and bring the bikes with us.

Now come the questions. How do we do it? Is it safe? Which box to use, cardboard, soft or hard case??? Fortunately, we came across this gem of a post by Cycling Tips editor Matt de Neef, so we wanted to share this with you. We’re sure the same concerns and questions have come up for you also. 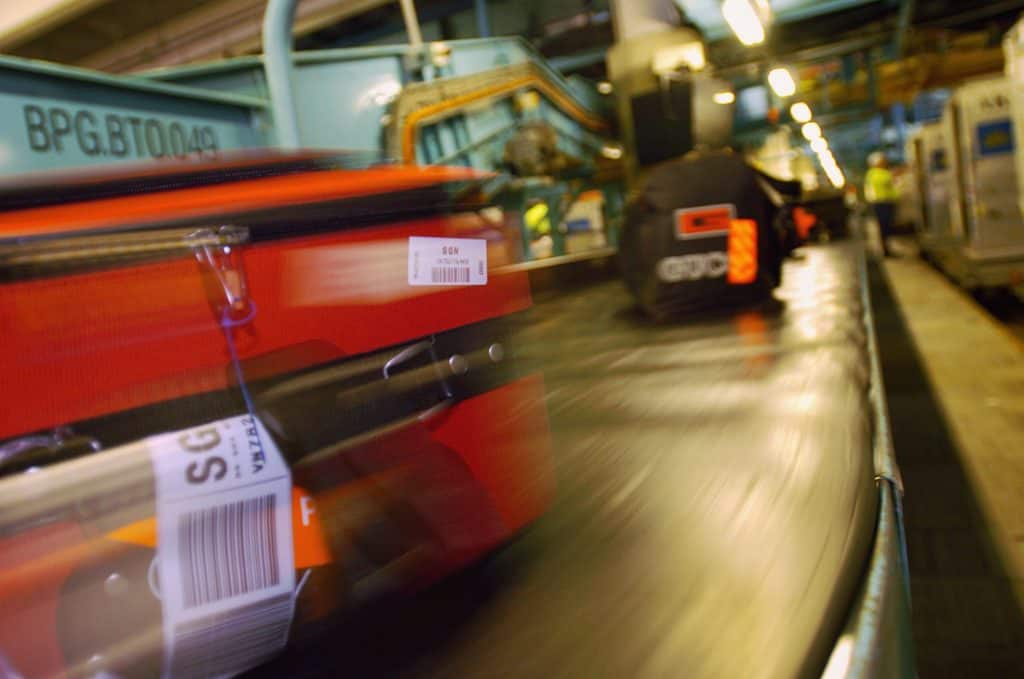 Why is my bag always the last one?

Working In a Fishbowl

Paul* has worked at the Adelaide Airport for more than a decade now, supervising the loading and unloading of passenger luggage and freight for many different types of aircraft.

The one thing he gets asked more than anything else is: do baggage handlers take as much care with passengers’ luggage as they should? 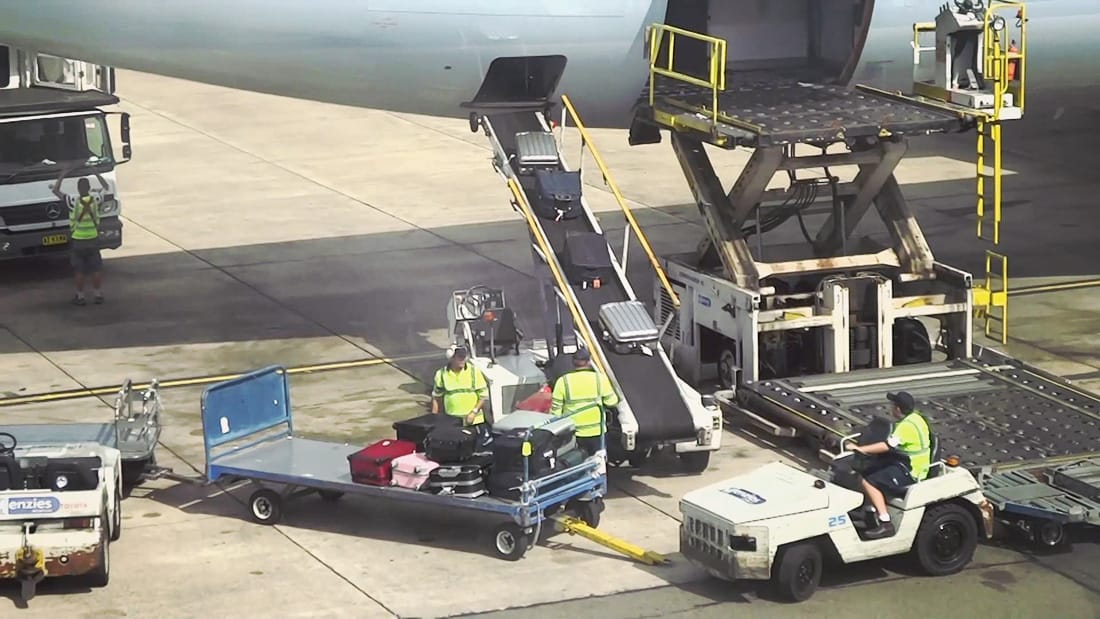 Hail the baggage handlers for they bringeth our goods in one piece!

“I know there’s one or two YouTube clips out there of guys throwing bags from bridges at an airport but it’s not an everyday thing I can tell you that, because someone’s going to wind up in an office with disciplinary action”. “We basically work in a fishbowl — the public sees our every move and we’re aware of it. With the people I work with, there is general care taken with items.”

Of course passenger luggage does sometimes get damaged in transit (less than 0.05% of the time, at least according to this sample data from the US Deparment of Transport (pdf), but when it does, Paul believes it’s likely to have happened before baggage handlers have even touched the bag.

“A lot of it has to do with conveyor belt systems. We don’t really manually handle the bags until they come downstairs”.  “A lot of it’s automated where they have different ramps and a lot of this equipment is quite strong, to pull the weight of all the people’s luggage. They also have arms that knock the bags down certain chutes so sometimes the damage is actually done through this conveyor system.”

When you drop your bike bag off at the oversized luggage counter it gets set aside with other large items such as prams, car seats, guitars and fishing rods and, generally speaking, loaded on to the aircraft last. Why?

“It’s actually easier for us to load those items last, after all the other items of luggage like suitcases, so they’re easier to get off the aircraft and don’t get damaged.”

If you’re about to fly with your bike for the first time, a big question you’re probably asking yourself is “what should of bike box/bag should I get?” Your three main options are a hardshell case, a softshell case or a simple cardboard bike box.

Don’t be put off by using a cardboard box but…back in 2008 Cycling Tips wrote about a memorable incident while flying with a bike packed in a cardboard box.

“I was once on a flight where it was raining heavily upon arrival and the box got drenched while sitting outside on the tarmac. My gear was delivered on the luggage carousel piece by piece since the box had been reduced to mush while sitting out in the rain.” 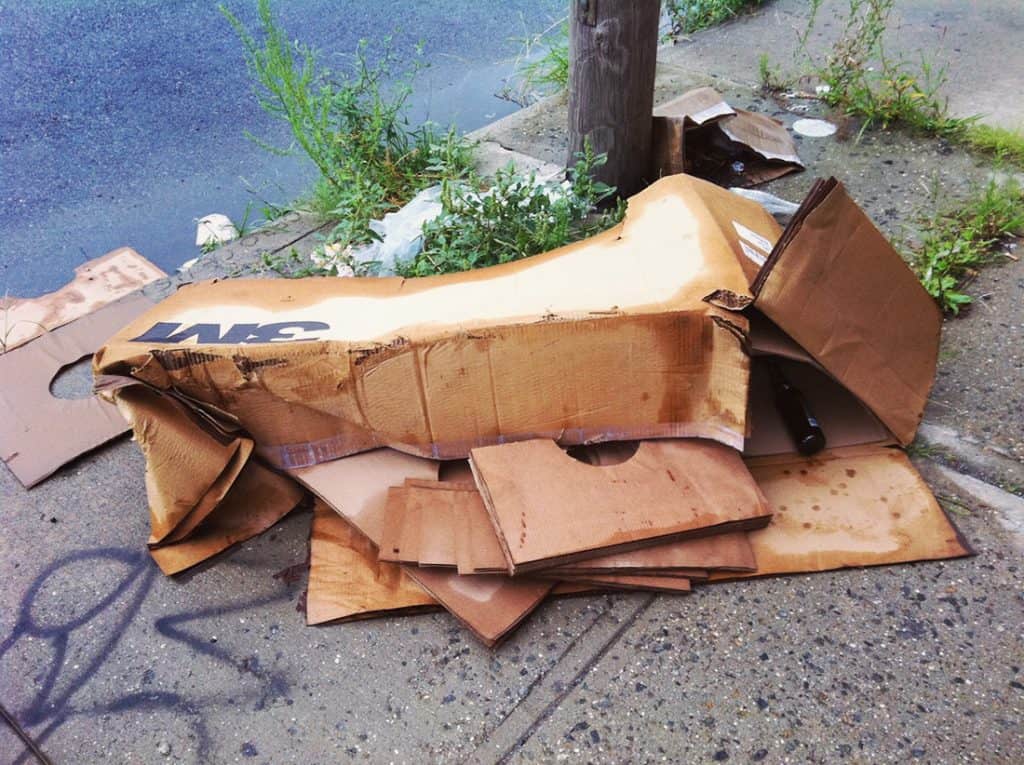 That’s certainly one disadvantage of opting for a cardboard box but the upside is that it’s the cheapest option by far — often free from a bike shop — and with appropriate padding the bike can be well protected. 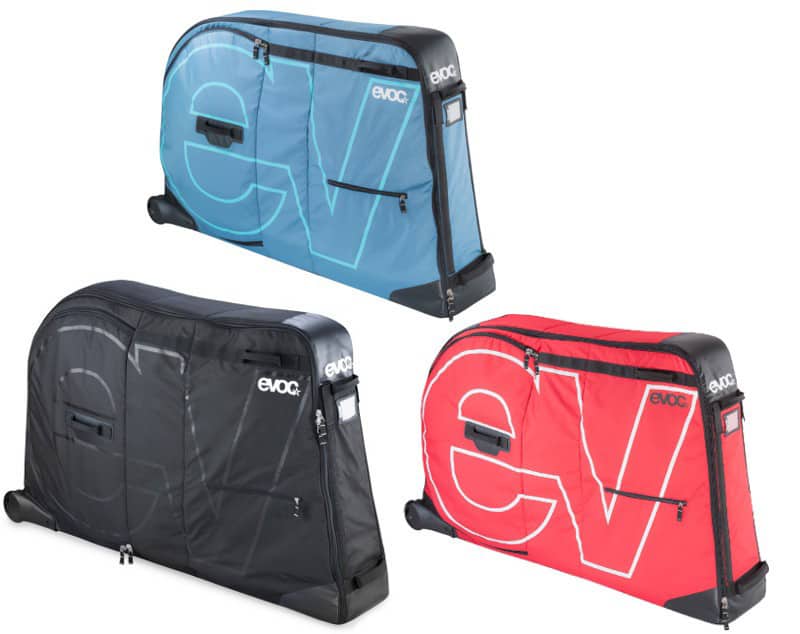 Soft cases are very popular and come in funky colours!

As well as being a baggage handler, Paul is himself a keen cyclist that has raced for many years and travelled extensively with his bike. So what sort of box or case does he recommend?

“I’m a big fan of the padded bag. I’ve actually got an EVOC bag, which I think is brilliant. There’s a couple other guys at work that have them and they prefer using them as well.”

While the padding in a softshell case generally does a good job of protecting the bike inside, Paul recommends taking extra precautions.

“I quite often put bubble wrap around the frame as well. I might put a towel towards the rear derailleur just in case, not a beach towel or anything like that, just a little bit of extra protection. I haven’t had any problems at all.”

And there’s another reason Paul recommends travelling cyclists use padded bags; one related to how luggage is loaded on to some aircraft.

“The 737 is a non-containerised aircraft so they use what’s called a belt-loader. It’s a machine that they position at the rear and front of the aircraft and the bags are placed on the conveyer belt on this belt loader, and loaded manually in the hold of the aircraft.

“If people are using padded bags they generally have a bit of traction on the belt loader. It just makes for a smooth delivery of the bike bag into the hold of the aircraft.” 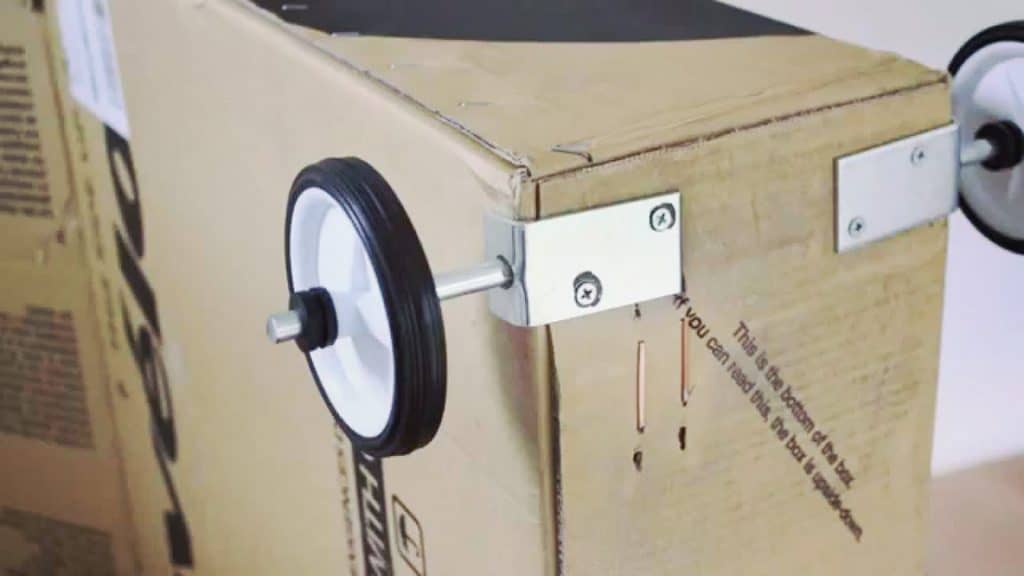 Hardshell cases, by contrast, can sometimes prove to be a hassle.

“In all honesty, when [hardshell cases] are on the belt loader, because they’re plastic, they actually slide quite a bit. It’s a rare occasion but … they can actually slide off the rubber belt, especially when it’s wet.”

Thankfully there are processes in place to stop that happening more often.

“The in-hold operator has stop-control buttons and he can stop it and the guy on the ground can help him position it back on the belt just in case it’s going to fall off.” But it still happens.

“The perception is that [hardshell cases] are more rigid and tough, but the likelihood of them falling of the belt-loader on their way into the aircraft is actually a lot higher than padded bags.” 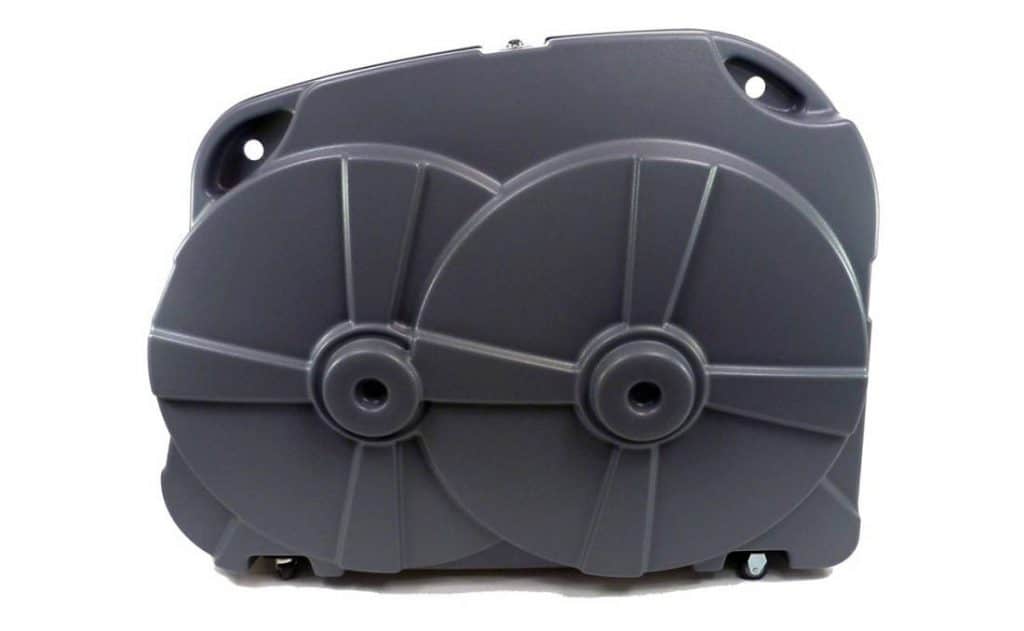 The Hardcase. Pricey, effective but is it the right choice?

Regardless of the sort of bag or box you decide to put your bike in, there are some seemingly obvious things you should take into consideration. Like making sure the bike isn’t hanging out of the box. 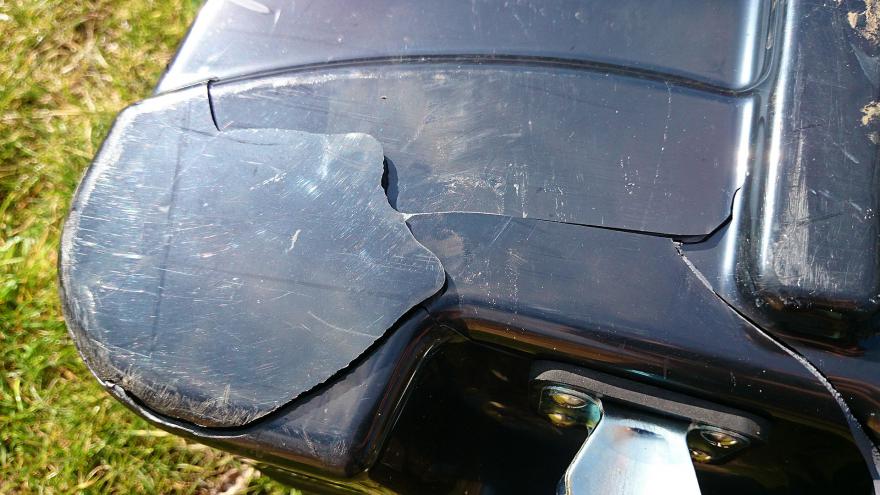 This is largely due to the protruding bars getting caught on parts of the machinery during loading.

“On the 737 aircraft there’s what we call a ‘magic carpet’ and this rolls forward and rolls back as the loader loads it. So if you can imagine that the bikes are going on last, the conveyer belt has to retract and quite often if you’re putting quite a few items in the back of an aircraft the tri bars will get caught or rub.”

A similar situation arises when people don’t remove pedals before packing their bike, particularly when using a cardboard bike box.

“The first thing the pedals do is pierce the box. If you have pedals hanging out — or sometimes bike skewers — they [can] actually get caught on the belt-loading system or caught in the webbing in the door of the aircraft. On the rare occasion, bikes have actually fallen from the belt-loader on the way into the aircraft because a bike skewer or a pedal got caught.”

Keep The Weight Down

Another way to reduce the risk of your bike getting damaged is to keep the weight of the bag or box down.

“We’ve seen bike boxes — whether it be a hard case, padded or even the airline-provided cardboard box — and guys will put nearly all their cycling gear into the bag and the bag or box is up to around 30kg.

And I guess you’re not breaking any weight restrictions in that regard but from our perspective these bags are not only awkward in size to maneuver inside the aircraft, but when they get heavy, generally speaking the guys are less tolerant, to some extent, maneuvering these bags inside the aircraft.”

We asked Paul what the worst bike-related accident he’d seen was in his time as a baggage handler. He spoke of a brand of padded bike bag with four wheels on the base.

“There must have been about 20 team bikes, probably around the Tour Down Under, and a couple fell off because they’d been placed on the wheels and these wheels don’t have any locking positions on them. So the guys thought they were positioned fairly tightly on the barrow and they started to move and then the bikes fell off the barrow. But that’s the probably the worst I’ve seen, other than bikes falling off belt loaders.” 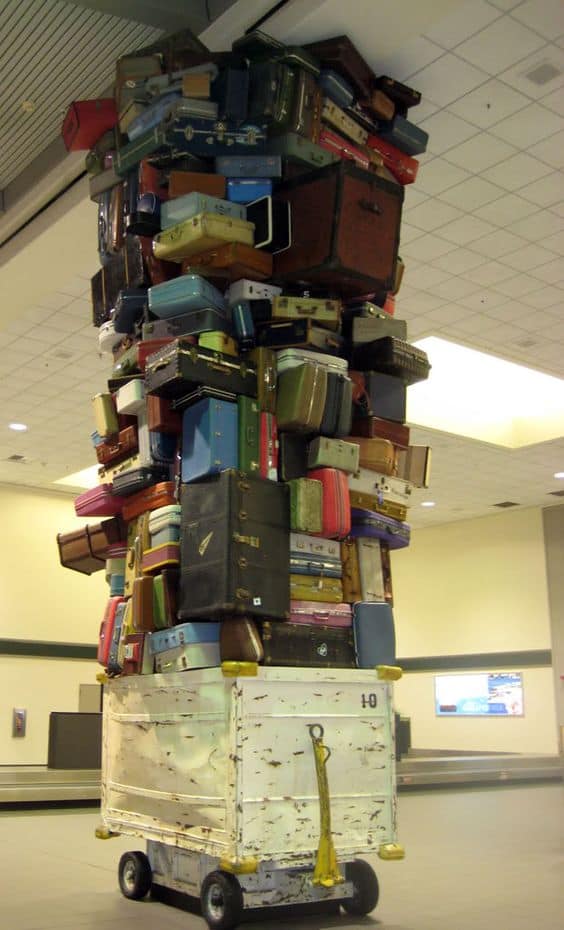 Keep the weight down.

But as someone who’s been responsible for the safe loading of luggage for more than a decade, Paul reiterates that unfortunate accidents with bikes are thankfully rare.

“I guess the perception is that there’s horror stories about broken frames and broken wheels and that sort of thing but in my experience I haven’t seen any of that. Hopefully the travelling public aren’t afraid to take their bikes on trips!”

Some Tips For Packing Your Bike Safely

*Name has been changed so that the person being interviewed can speak freely about past incidents.

The tick debate: how should you pull them out?

INTERVIEW with the Secret Dog Society

Injury: It’s not all physical…

Staying Sane in a World With Less Mountain...

Ride Every Day The Bass Way