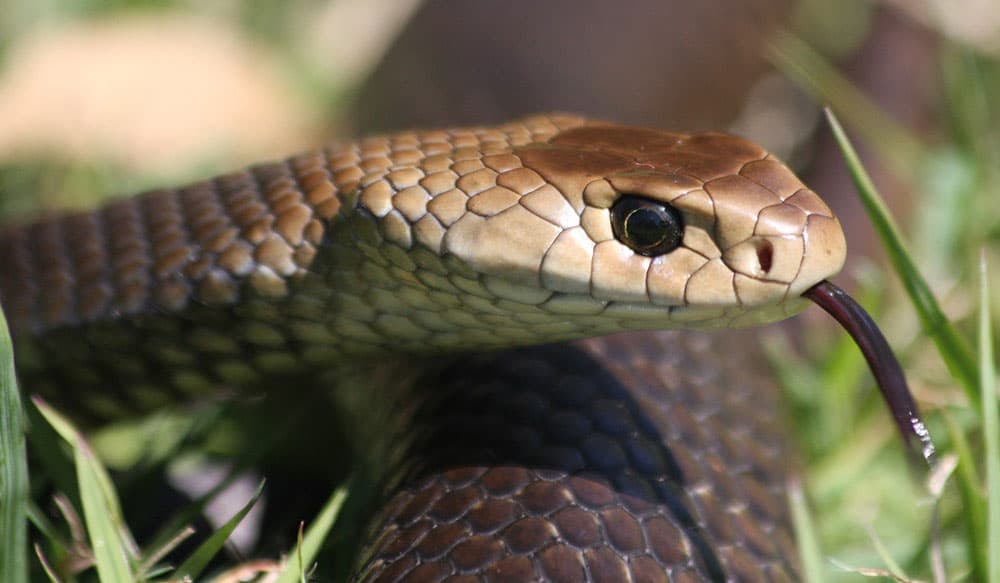 Home Featured Articles It’s The Season To Be Cautious

It’s The Season To Be Cautious

But what about the SNAKES? They’re everywhere! You wouldn’t get me living in Australia.

We hear this every time we go home to visit, but in actual fact, after being here for over twelve years and being out in the bush almost every single weekend in that time, we’ve seen only a handful of snakes, but that doesn’t mean you should become complacent.

When bushwalking, you absolutely must carry at least two compression bandages (NOT Crepe!). We’ve continued this good habit into our riding activities. We get berated and made fun of when we mention we’re carrying bandages in our packs, “typical poms”. Although we’re not Poms, we’re Welsh but we’ll let that slide. But you know what? I’d rather have that piece of mind knowing they are always in my pack for when myself or another person may need them. What’s the alternative?

For a couple of hundred grams, and not much cost, why even bother to make a fuss about it. Just go out and buy some and keep them in your pack. Bish, bash, bosh…Job done!

Most Venemous Snakes In The World

Australia is known for its dangerous snakes, and we have many. We share our continent with about 140 species of land snakes, some equipped with venom more toxic than any other snakes in the world. But bites are actually quite rare in Australia and, since the development of anti-venom, fatalities have been low – between four to six deaths a year. 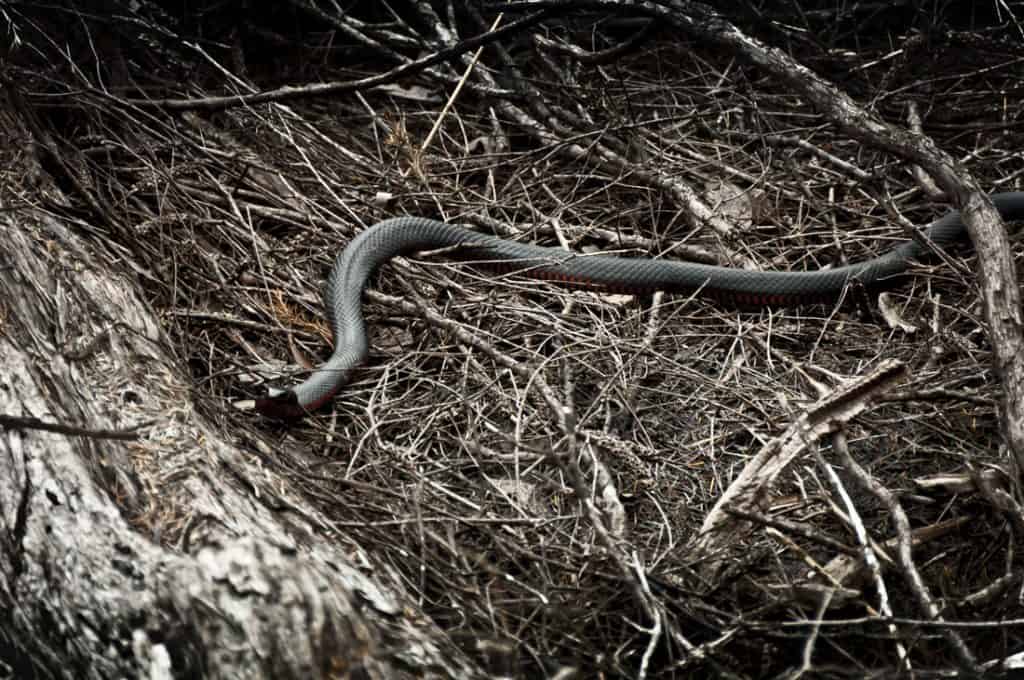 The Red Bellied Black Snake (Pseudechis porphyriacus). Strikingly beautiful and venomous but quite timid. The red-bellied black snake is somewhat less venomous than many other Australian snakes, but you’re more likely to come across it in urban areas and its bite is certainly no picnic, causing significant illness and requiring medical attention.Pic:©Jason Lorch

As it turns out, crepe bandages are vastly inferior when it comes to slowing the effects of snakebite. Luckily, there is a solid alternative. 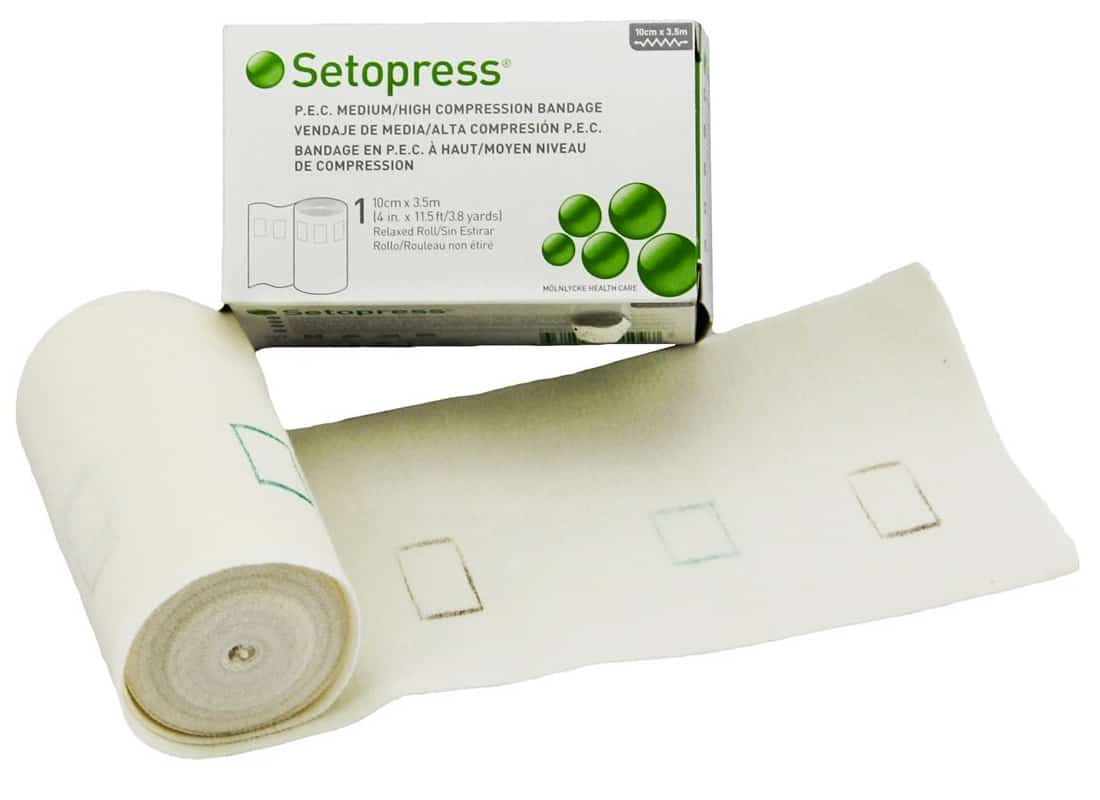 A much better bandage is now available in Australia – the Setopress (currently the only brand of its type). This bandage is specifically designed to regulate venous drainage. The Setopress Bandage has a number of advantages over other bandages.

How many of us bushwalk with a few crepe bandages in our pack under the impression that these will be the best thing to use for bandaging and immobilising a limb should we be unlucky enough to be bitten by a snake? 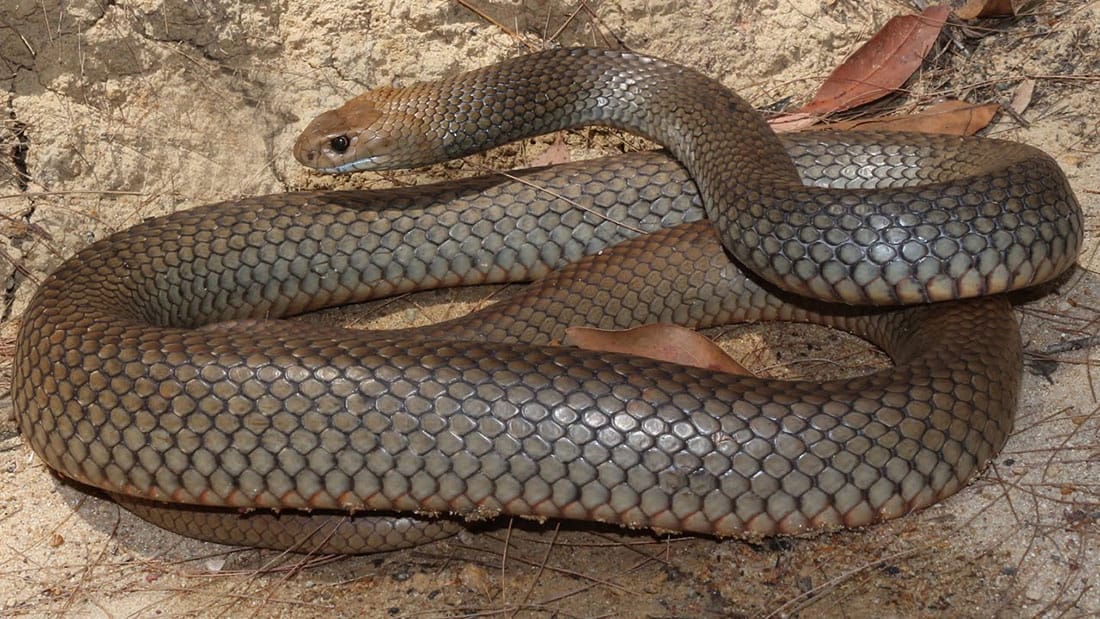 Eastern Brown Snake (Pseudonaja textilis). Fast-moving, aggressive and known for their bad temper, eastern brown snakes, together with other browns are responsible for more deaths every year in Australia than any other group of snakes and they thrive in populated areas, particularly on farms in rural areas. Pic: Australian Geographic

Recent research shows that the effectiveness of traditional crepe-style bandages is significantly lower than modern elastic bandages, and even elastic bandages will be compromised if they’re not applied at the correct pressure. In most cases it has been found that not enough pressure is applied when using these bandages, decreasing their efficacy. 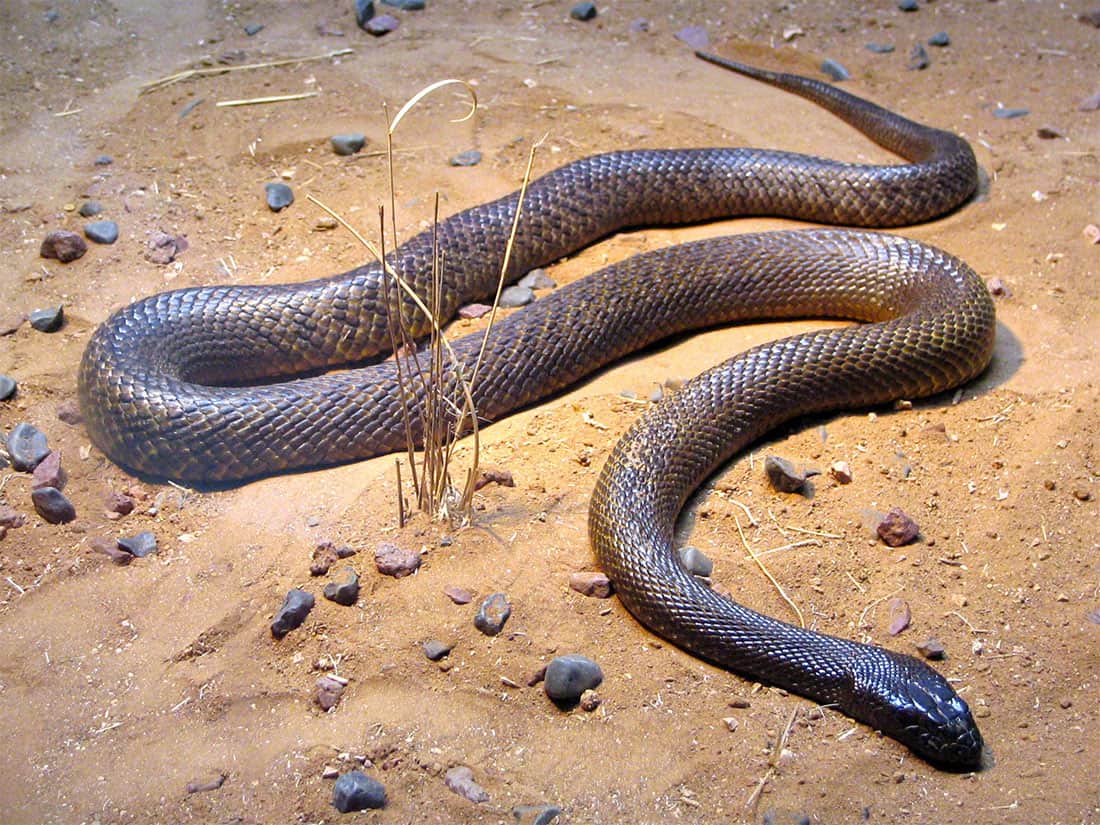 Inland Taipan (Oxyuranus microlepidotus). Reclusive and rare, the inland taipan hides out in its remote, rocky habitat. This snake only makes the top 10 because of its highly toxic venom, considered to be the most potent of any land snake in the world; it has the potential to kill an adult human within 45 minutes. Pic: Australian Geographic

A Much Better Bandage

A much better bandage is now available in Australia – the Setopress (currently the only brand of its type). This bandage is specifically designed to regulate venous drainage. The Setopress Bandage has a number of advantages over other bandages.

Firstly, it is wider (10cm) and longer (3.5m) than most crepe or elastic bandages. A single bandage will reach from the extremities to the knee or armpit, which means that less bandages need to be carried and this may mean that people will be more likely to carry them.

Secondly, the bandage allows you to regulate the pressure applied by using a series of rectangles printed along its length. As the bandage is stretched, the rectangles become squares.

Thirdly, the squares are printed off-centre in order to assist the first aider in creating a wrap of half width overlap at each turn. This half width overlap is required to provide correct pressure, and also to prevent the bandage causing a tourniquet effect.

Finally, the bandage is textured, which helps to prevent it slipping, which would immediately reduce the pressure and effectiveness of the bandage. 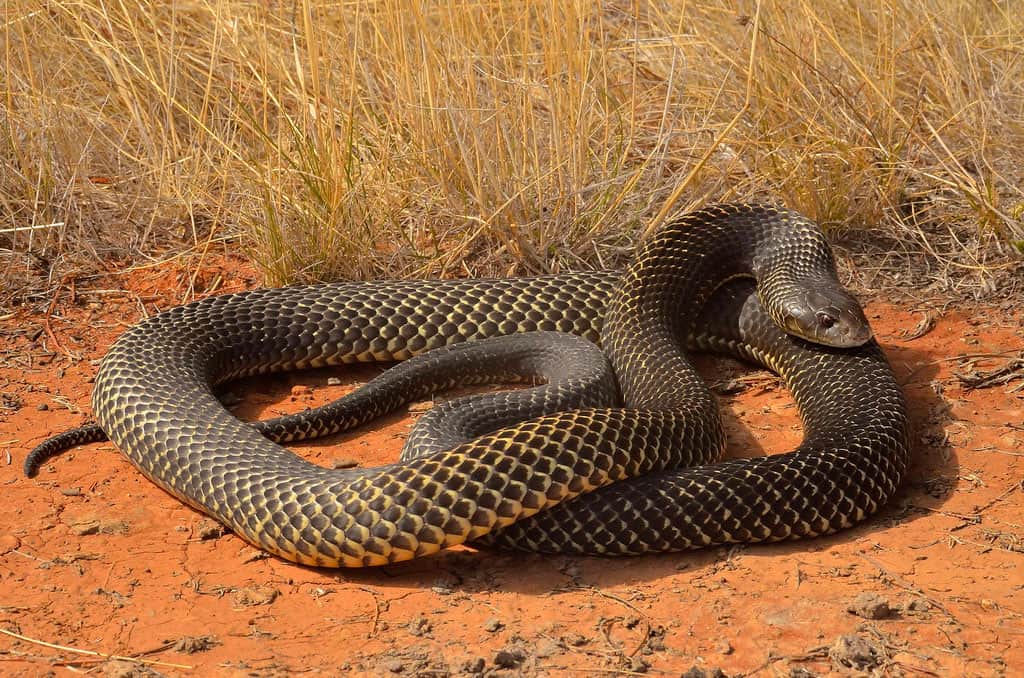 Mulga Snake (Pseudechis australis). The mulga is the heaviest venomous snake in Australia and has the largest-recorded venom output of any in the world – delivering 150mg in one bite; the average tiger snake only produces 10-40mg when milked. Pic Australian Geographic

In terms of bandaging technique, firm pressure bandaging is required to restrict the lymphatic flow of toxins after snakebite. Strict limb immobilisation is necessary to minimise lymphatic flow, since walking after snakebite will inevitably result in the spread of toxins throughout the body, and render any pressure bandaging useless. More detailed insight can be gained from the following website and papers:

Crepe bandages still have their uses, and it’s a good idea to keep at least one in your pack. They can be used to bandage a sprained ankle or to add a splint to a broken limb, or even an already-pressure-bandaged snakebite. So don’t leave them at home just yet.

Look Where You Walk

As a bushwalker and mountain biker and being in snake habitats, being aware and informed of the danger is important. In Australia, we have no large carnivores that we need to fear when out in the bush, except for crocodiles in northern Australia. Rather, we should watch where we walk and to look at where you step and pay particular attention to logs. 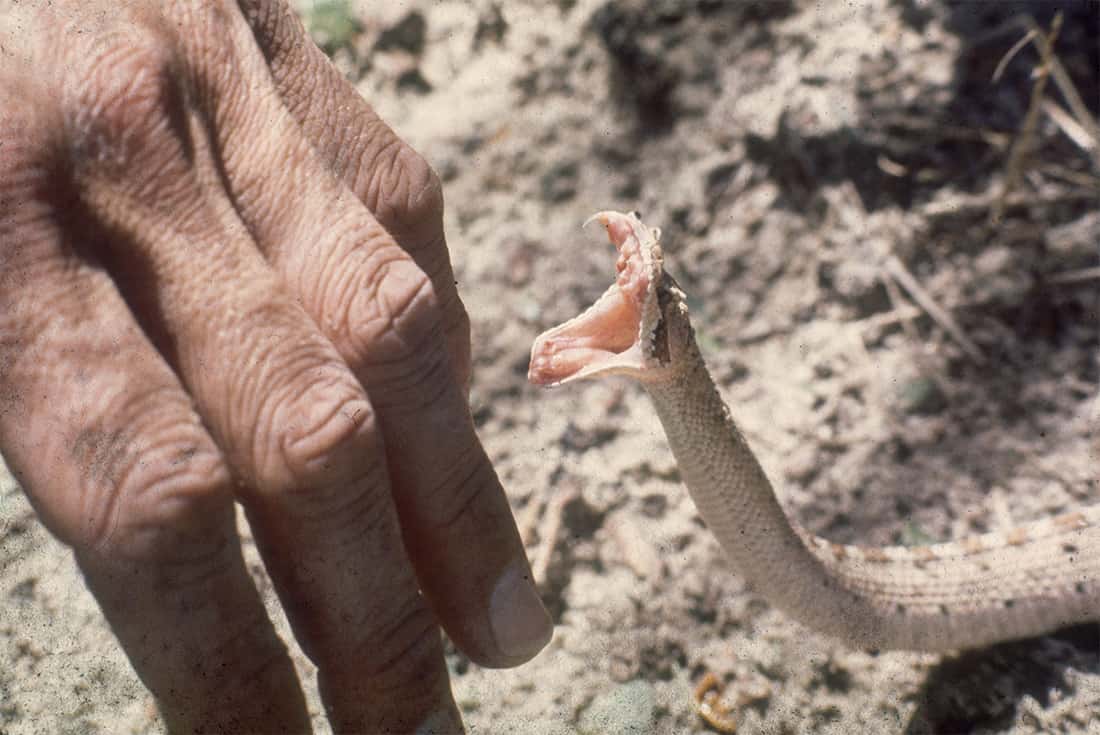 Gaiters (when Bushwalking) are likely to be effective against snake bite because Australian snakes generally have small fangs. Also, even if the snake were to bite through a closely woven, thick gaiter, the venom will either be absorbed by the gaiter itself, or, due to its position away from the calf, will lead to the venom running down the inside rather than making contact with skin. While there is no research into the efficacy of gaiters, that we are aware of, I will continue to wear mine when out bushwalking in the warmer months.

Also, keep an eye on your packs, tents and sleeping bags. Keep them closed! We have heard of stories where snakes have taken up residence inside. This is not the surprise you want as you crawl into bed.

This video is of my wife and I making our way back after an overnight hike in the Blue Mountains, New South Wales. It’s a lovely Red bellied Black Snake and was right across our path, so we just had to be patient and encourage it to move away.

Just take your time and don’t get too close! If you can get around it, safely, then do so. Giving it a wide berth. More often than not, in the case of the Red bellied Black Snake, they make their own way off in time. Just don’t pressure them.

In this video you’ll see I shook the leaves of a tree above us, which caused shadows to move on the ground. Now, I’m not certain that this was the reason it moved, but it did, and that was all we wanted.

Now what are you going to do today? Yes that’s right. You’re going to buy yourself some compression bandages and put them in your bike and hiking packs.

MOW – Riding Warm Up To Improve Your Performance On The Trail

Injury: It’s not all physical…

YOGA Special: How to Touch Your Toes, Yogi-Style

A New EPIC Trail Opens Across The Ditch.