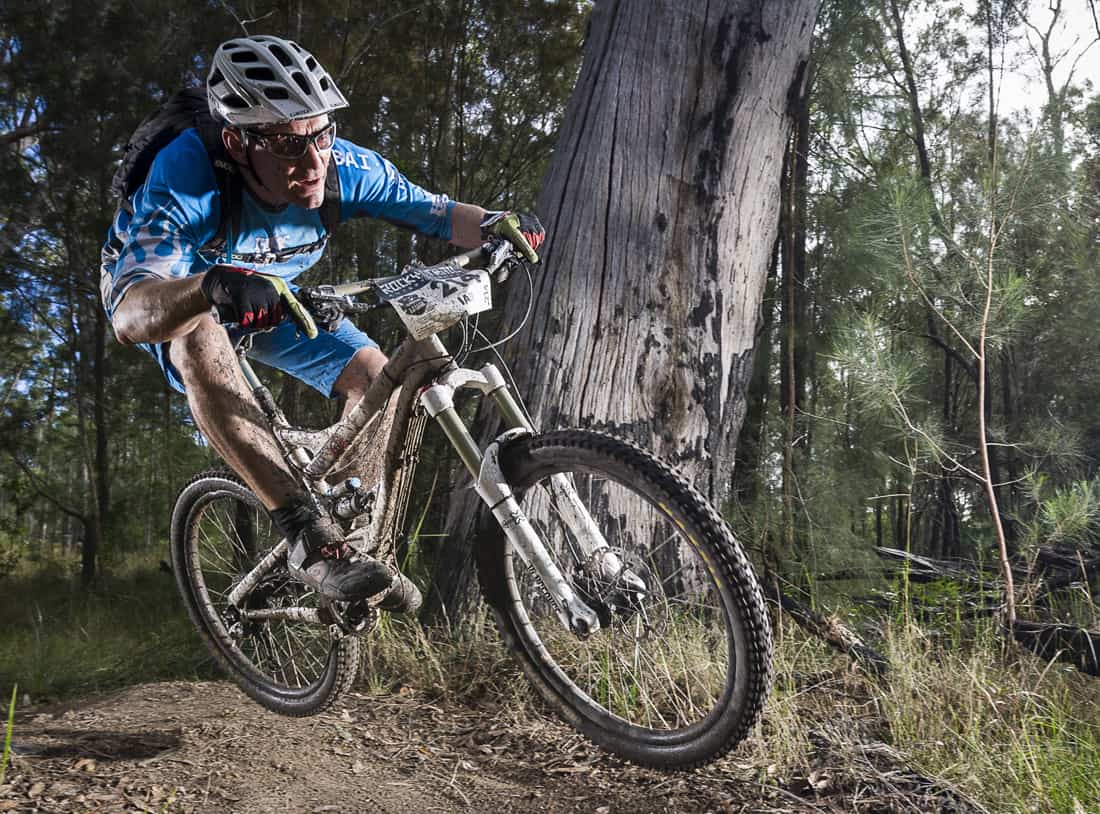 Home Featured ArticlesAdventure Have You Got Your SUPERFLOW On?

Have You Got Your SUPERFLOW On?

The final race of the SUPERFLOW series was nigh, so we made a Kempsey recce a few weeks before. They had had a bit of rain in the run up to our visit and the trails were in good condition. The digging teams had been hard at work prepping the trails and excitement was high.

We met with some of the locals who showed us round. The area comprised of a hill with all the tracks starting on the very top and going North, South East and West. Below this hill is a larger flatter area out towards the golf club. Trails were varied, flowy and lots of fun with plenty of floaty jumps punctuating them. None were particularly steep and pedalling was required here and there to keep up speeds when pushing hard.

The area is definitely worth a visit largely down to a very active and dedicated trail building group. The regularly have social rides and the locals very hospitable. Contact them via kmorc.weebly.com or their facebook group “Kempsey Macleay Off Road Cyclists”.

We all expected Round 5 to be interesting for lots of reasons.

Firstly;  that it was the last round so the series points would be decided.

Secondly; it was being run with a format change – 4 race runs on each of 2 days, so a total time of 8 runs deciding the results.

But no one expected the 20mm of forecast rain ending up being a 150mm deluge, making race weekend conditions pretty tough with some sections of trail turning to utter slop that was close to being unrideable. 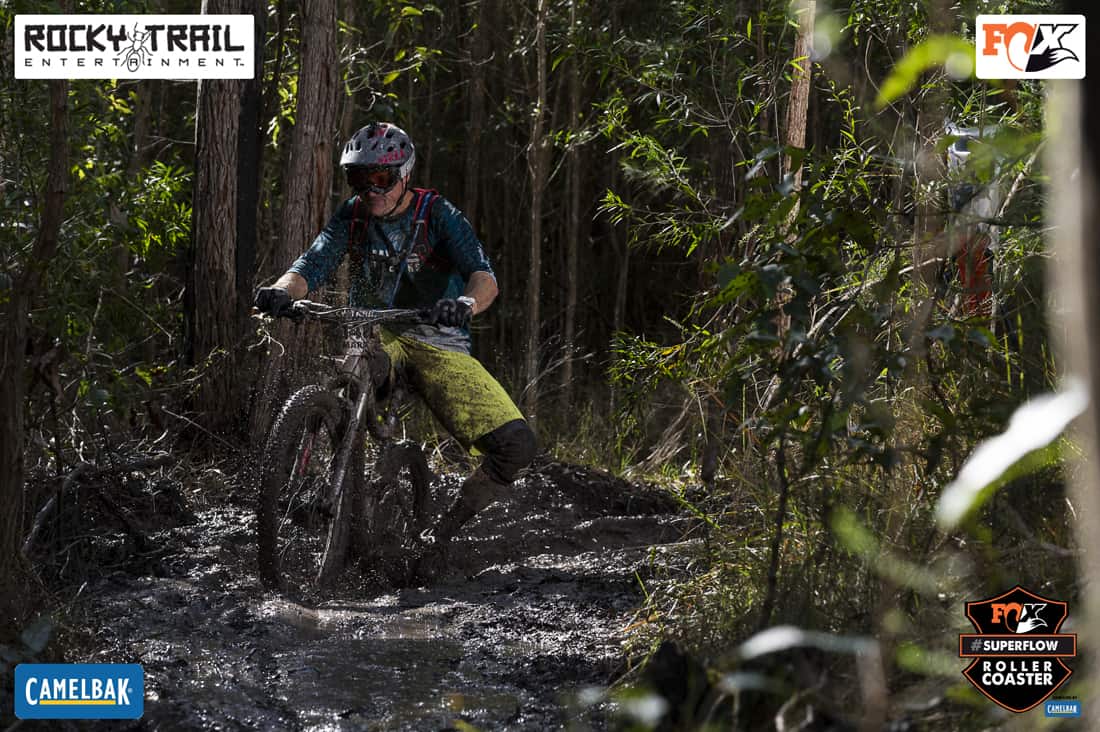 Beastly mud and oomska! When we said it was sloppy, we meant it! Pic: ©Outer Image Collective

The huge rainfall made for extremely tough racing conditions but what is amazing is just how close the racing was on the first day. About 125 riders entered making a new Kempsey record turnout for a Rocky Trail Superflow round. 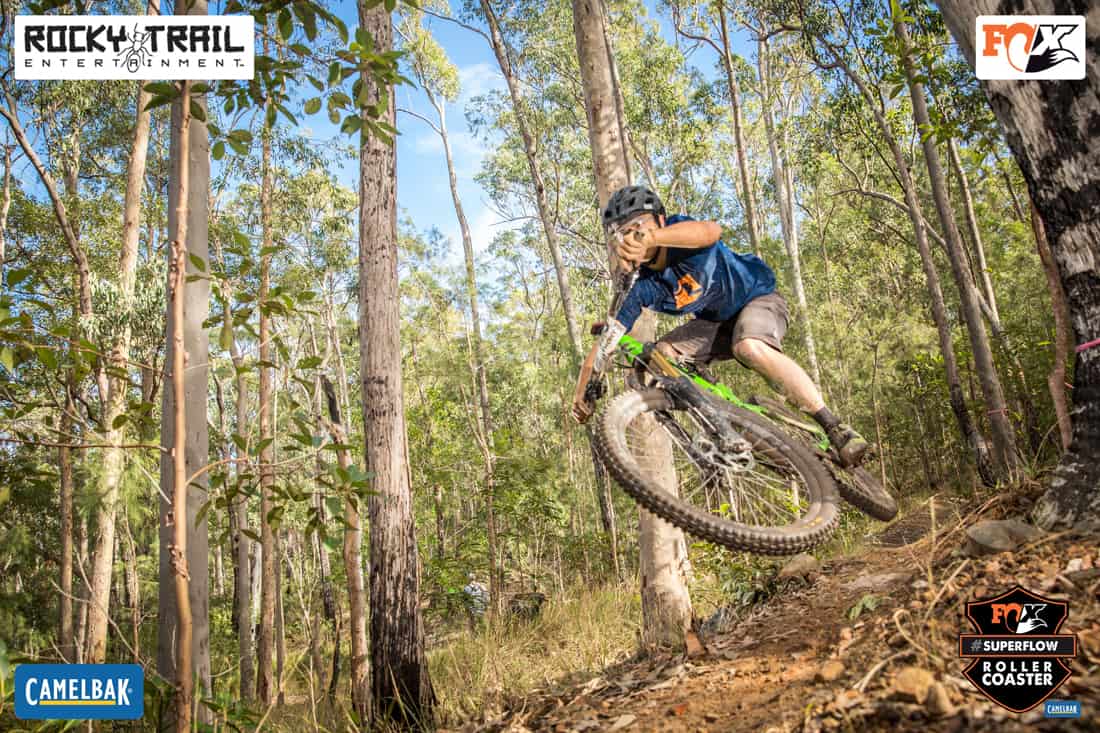 The magic total time for the front runners was 17 minutes. In the Elites 6 riders went under this but only split by 7 seconds total. Antony Elliot and Tim Wynan were tied on 16:53, Jake Devries was on 16:54, Daniel Lyons was on 16:56, Rhys Flahive on 16:57 and Chris Dowsett was on the dot of 17. Amazingly tight considering the unpredictable and sloppy course conditions. 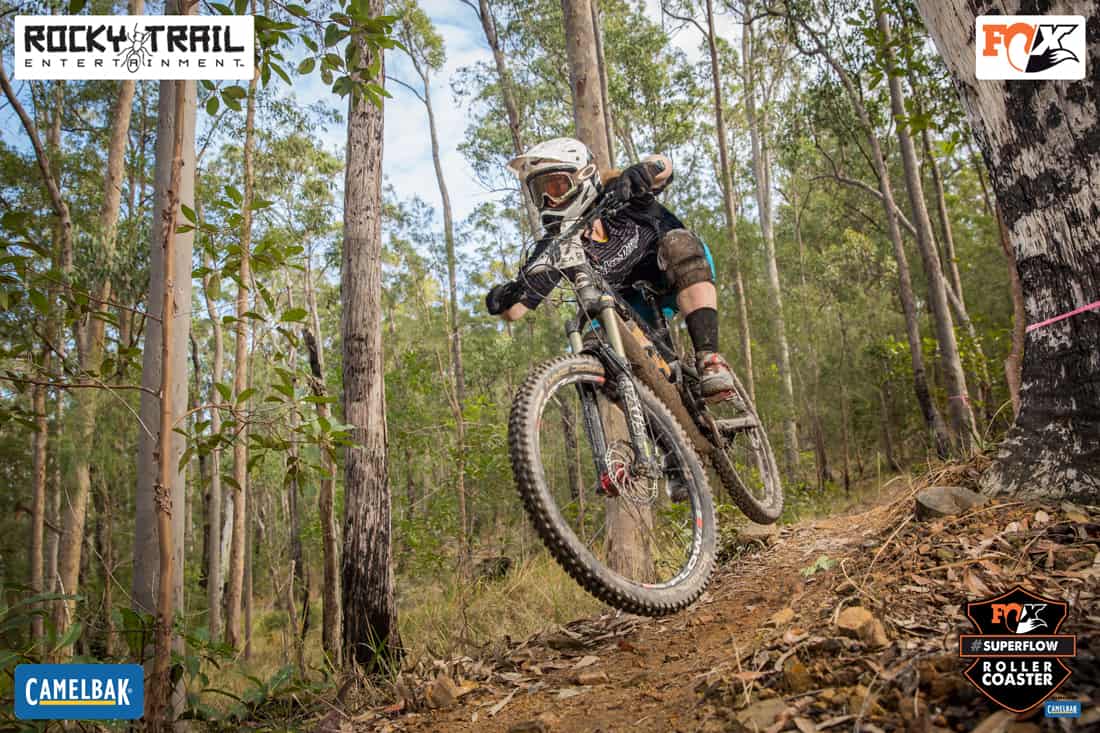 Rebecca Wyatt, eyes on the prize and taking out the Womens Elite category. Pic:©Outer Image Collective

In other categories, Darcy Plunkett led the Expert by 8 seconds with 17:22, Daniel Morgan had a healthy 52 seconds at the front of the Vets, and in the very competitive Masters field Doug Pollock had 15 seconds lead on Daniel Segeri with 17:10. Fastest of the women was Rebecca Wyatt in the Women’s Elite with 20:25 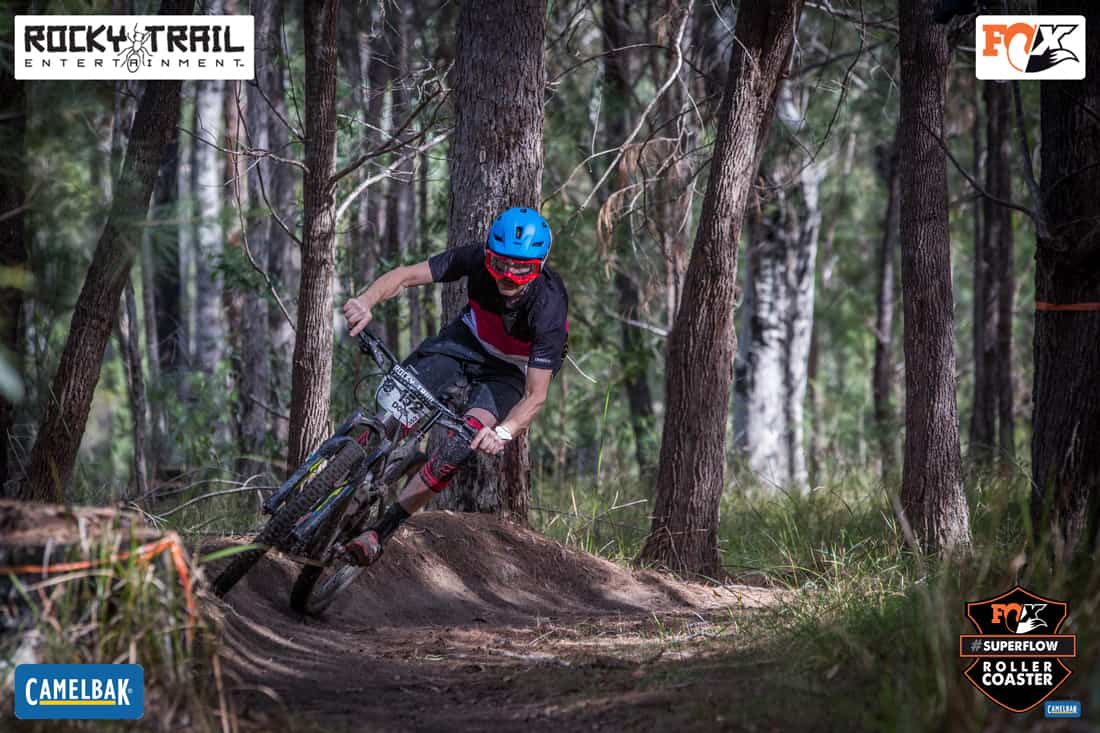 But again the big story of the weekend goes to the Juniors who showed everyone up with some truly devastating times, the kind that has had me double and triple checking the results sheets while writing this just to make sure. In the U17’s Harrison Dobrowolski clocked a total of just 16 minutes and 10 seconds, a full 43 seconds faster than anyone else on the day, unbelievable!! Second on day one in the U17s was Sam Patterson also with a sub 17 time of 16:58 that would have also put him in the mix with the top Elites. Jon Gatt posted 17:02 in the U19s that would have also put him in there. 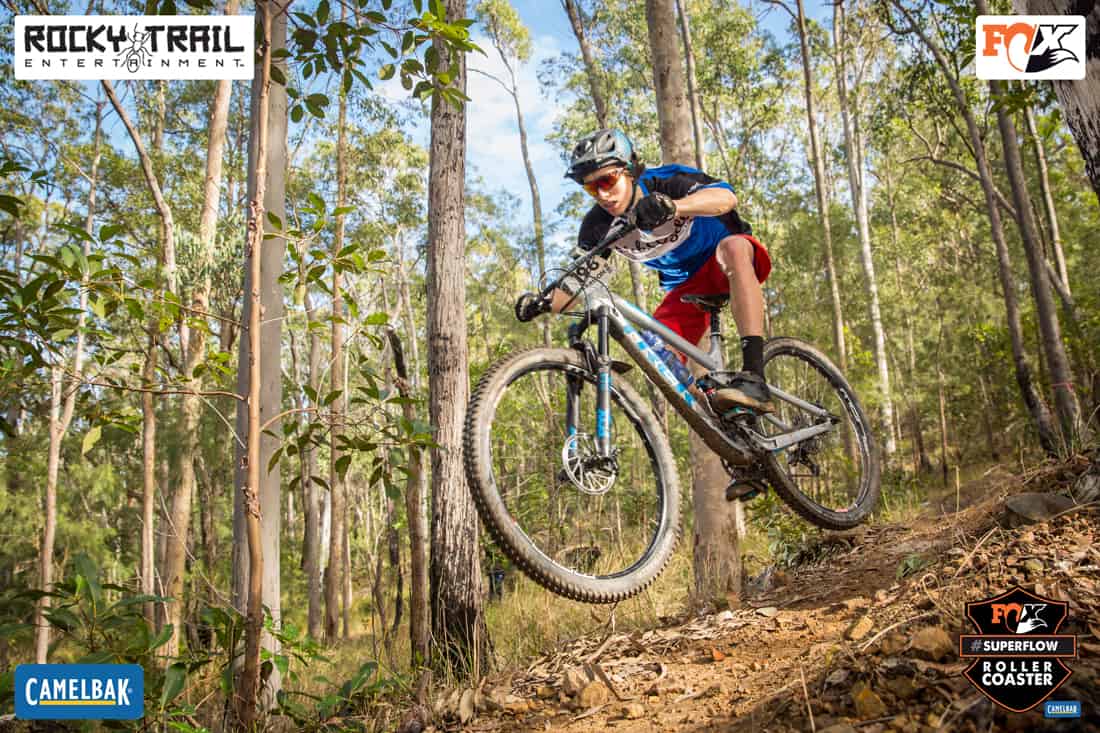 It must be something in the Blue Mountains water. Harrison Dobrowolski getting his SUPERFLOW on and cleaning up the U17s and bagging the quickest times across ALL categories! Pic:©Outer Image Collective

Race runs on day 2 were all on Sunday morning and due to the prevailing trail conditions…atrocious!  Three out of the four tracks were dramatically shortened. I was personally very glad to see the very long uphill flog of Camelbak binned but I think the other long trail of Fox, could have/should have remained. It was one of the few sections that really was fun to ride in the conditions. 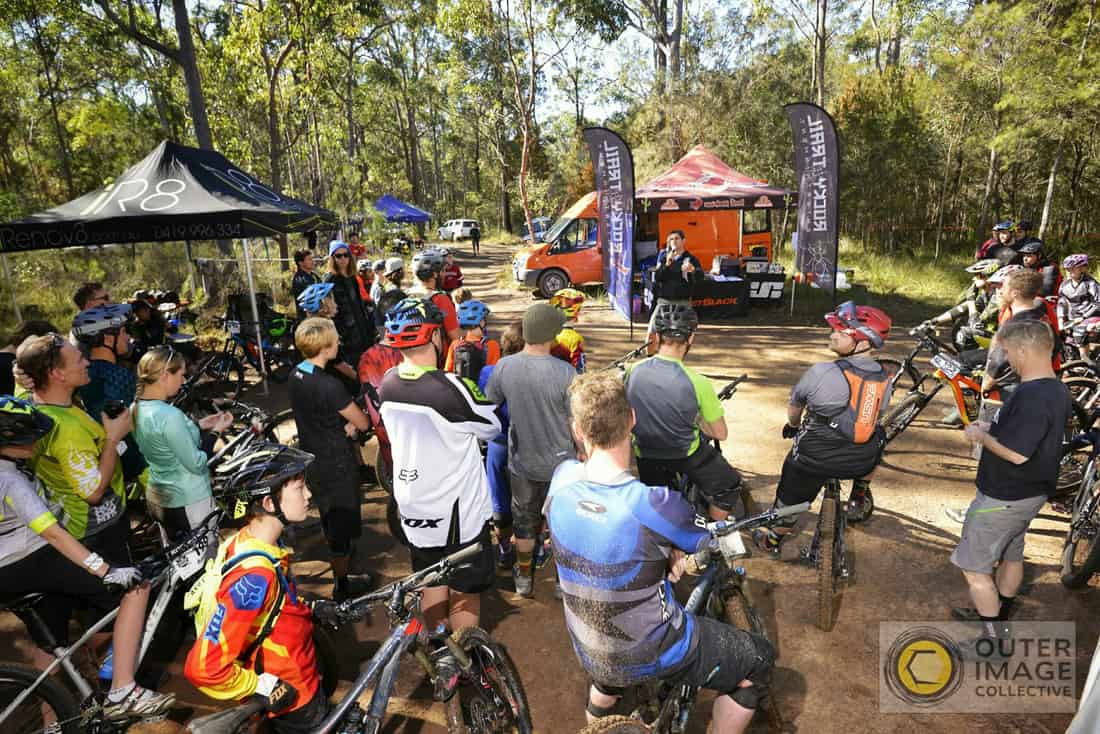 Day 2 had a few less riders but still a great turnout and a ton of fun was had by everyone. Pic:©Outer Image Collective 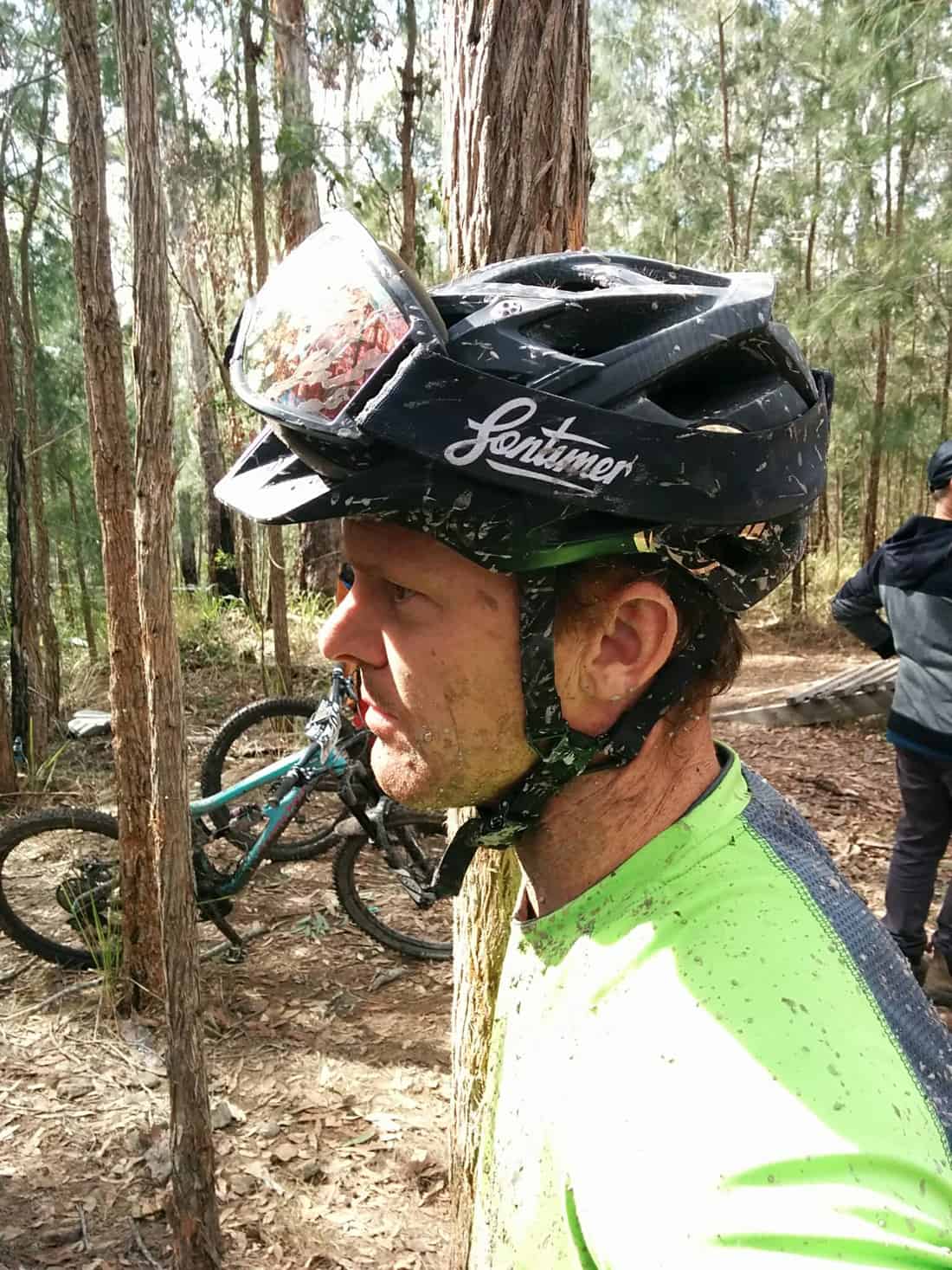 So Enduro! We love the look. Pic: ©Rockytrail Entertainment

The event area was noticeably quieter on Sunday with visibly less racers turning out . Much of this was due to the conditions taking a large mechanical toll on bikes. I know of a few broken chains and drivetrains everywhere sounded disgusting with plenty of dropper posts struggling by the end of Saturday.

By the end of 8 race runs anyone with a time in the 24 minute mark could consider themselves very fast.  The top Elites all went very, very fast with sub 24s but one rider alone smashed it out of the woods recording a sub 23 total time of just 22:38, a full 56 seconds faster than ANYONE else!  That was Under 17 Harrison Dobrowolski. That’s a name that’s not easy to spell or for my tongue to say but it’s definitely one to remember as it’s got to be one we are going to see plenty of in the future. 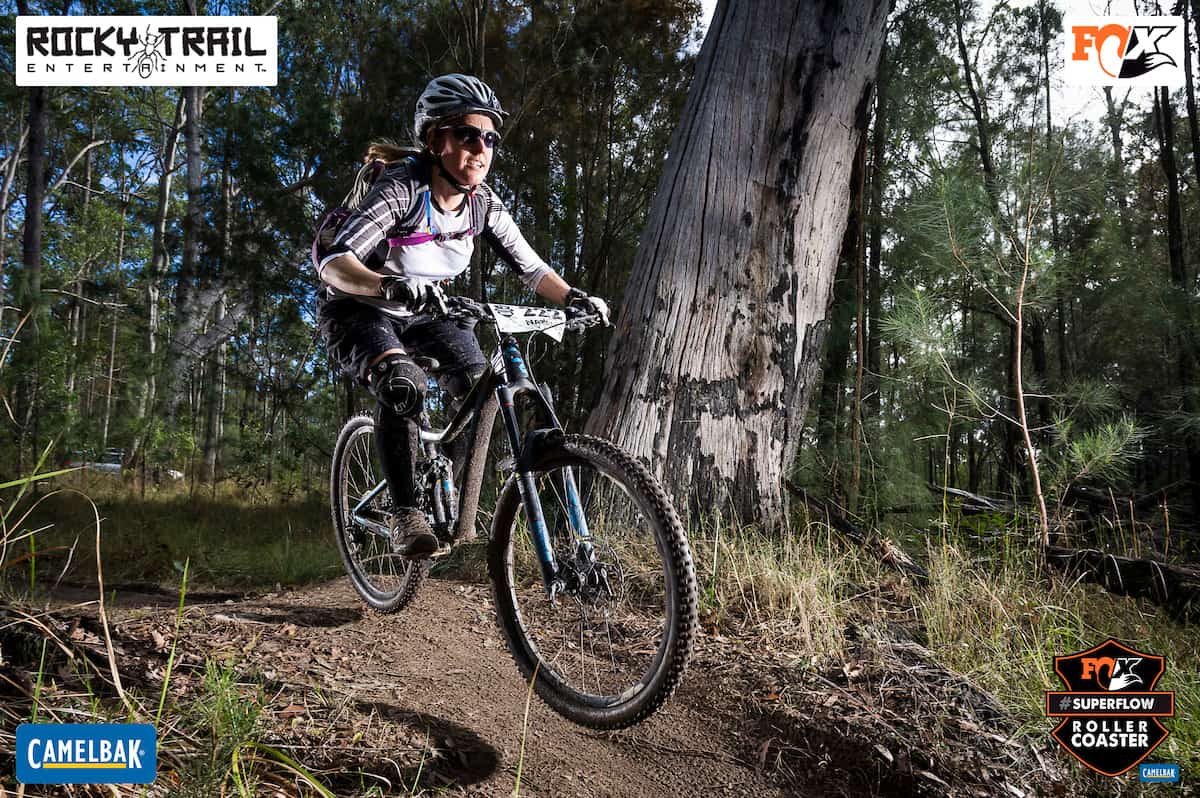 In the Elites it was incredibly close but Antony Elliot eeked out 4 seconds on Tim Wynan for the win with 23:42 and Rhys Flahive was just 3 seconds behind in third.

Just one second in the Expert split Darcy Plunket in first with 24:43 and James Wright in second with 24:44.  James Radcliffe completed the podium in third with 24:59.

The full SUPERFLOW results can be found for this round and entire series here.

I've been playing the outdoor games all my life. Afflicted by Activity Attention Disorder I fall very much into the 'jack of all trades' category. I can describe myself as a kayaker, climber (lapsed), snowborder but mostly mountain biker nowadays I have traveled and played lots of games all over the world. Work has been a bit like play and I have worked in virtually all aspects of the outdoor industry including retail, manufacturing, instruction and expedition leadership. I'm very happy that I seem to have sustained, if not increased, my passion for the outdoors and my enthusiasm for playing the games over time. Check out www.seekerbikes.com to see a current project of mine.

The future of womens mountain biking is bright...

Let AllTrails Help You Get Back Into Nature!

Thanks to MIND, setting up your bike has...

SET EVERY TRAIL ON FIRE!